There have been four BMW M3s since it’s inception in 1986. Today would have marked the introduction of the 5th. But it doesn’t. Instead today marks the birth a new model based in the ideals of the M3 but moved up the performance and price ladder just as the BMW model it is based has. Today is the birth of the M4.

The BMW M4 Concept foreshadows the real M4 In every way but the blacked out glass. And the only reason that’s there is to save the final interior design for the full reveal this January at the Detroit Autoshow. 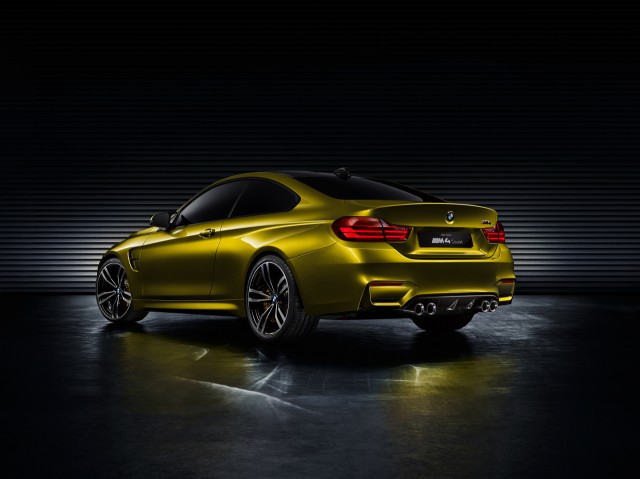 That aside let’s take a look at what we have here. Given spy photos and what we know about the evolutionary ways of BMW M, the styling isn’t all that surprising. There’s the evolved face of M with a slightly swollen 4 Series coupe body shell. It’s undeniably attractive and certainly worthy of the M badge in appearance alone. But it’s what’s underneath the skin that makes an M car and that’s where our questions turn. What’s made of carbon fiber? What are the details of the drivetrain? Is the suspension radically different than the E92 M3? How does that EPS steering feel? These are the questions we’re dying to get answers for and naturally won’t have until we get behind the wheel early next year.

But until then it’s time to sit back and revel in the fact that we’ve got a new M car. Expect much more as we head into 2014 culminating in the full reveal at the Detroit Motor Show. Then look for the M3 four door and then M4 two door to hit dealer lots sometime in the first half of 2014.

Official Release: Amidst magnificent award-winning sports cars of yesterday on show at the “Concours d’Elegance” in Pebble Beach, the BMW Group will be offering a first outlook on a high-performance sports car of tomorrow – the BMW Concept M4 Coupe.

“The BMW Concept M4 Coupe reflects the BMW M philosophy in ideal form: It combines motor racing genes and unrestricted everyday suitability in a highly emotional overall concept. For four generations, the BMW M3 has put motor racing on the road and the BMW Concept M4 Coupe consistently continues to pursue this fundamental idea. The new model designation “M4” refers – like all other BMW M automobiles – to the series on which this concept car is based,” explains Dr. Friedrich Nitschke, Chairman of the Managing Board of the BMW M GmbH.

THE DESIGN OF THE NEW BMW CONCEPT M4 COUPE. The BMW Concept M4 Coupe, finished in the colour “Aurum Dust” exclusively developed for this model, continues with BMW M’s design language – strong in character, emotional and extremely dynamic. From every perspective it is the embodiment of agility, dynamism and superior performance. Large air inlets in the dynamic front, a swift design language in the side and a sporty, low rear give clear visual indication of the car’s tremendous dynamic potential. CFRP (carbon fiber reinforced plastics) elements such as the front splitter, the roof, or the rear diffuser underline the optimized lightweight concept down to the smallest detail. “At BMW M, design is above all an expression of function. Each design element is based on the underlying technical demands of the BMW M high performance concept. Thanks to this authenticity, the design provides a taste of what can be experienced with each model: Power, precise control and superior handling – an unforgettable driving experience on the racetrack as well as on the road” says Adrian van Hooydonk, head of BMW Group Design. 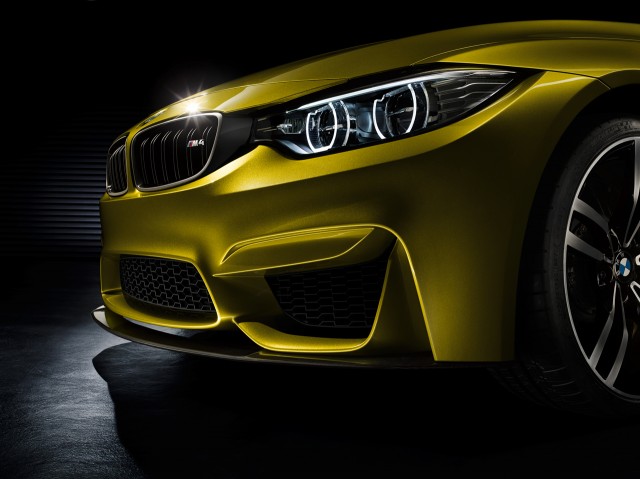 Faceted surfaces, precise contours and distinctive visual depth shape the powerfully expressive front end of the BMW Concept M4 Coupe. The classic “BMW face” with its double kidney and a modern interpretation of the  BMW twin round headlamps featuring LED technology provides the car with a distinctive identity, making it recognizable as a BMW M automobile at very first glance. The bonnet with its characteristic power dome symbolises the immense power of the engine that lies beneath it. This dynamic element is further emphasized by a distinctive contour. A further striking feature on the front of the new BMW Concept M4 Coupe is the BMW M double bar kidney grille: The black kidney grille bars imitate the characteristic M double spoke design of the BMW M wheels, the M4 emblem on the kidney grille adding an exclusive accent to the front end.

The powerfully shaped front apron sporting the carbon fibre front splitter immediately catches the eye. The three large air intakes supply the high performance power unit with sufficient cooling air. At the same time, the interplay of surfaces, contours and volume authentically express the car’s supreme potential. The sharply outlined vertical air vents located in the outer section of the side air intakes, the so-called Air Curtain is a design statement of its own. Together with the Air Breather, this feature ensures the aerodynamic closure of the wheel arches and consequently, improved air flow and fuel consumption. 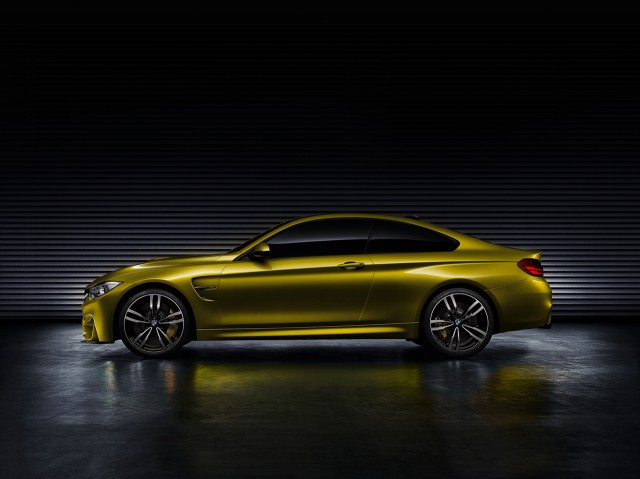 Viewed from the side, the dynamic impression conveyed by the front end continues. A streamlined, flat silhouette and an athletic body design characterize the BMW Concept M4 Coupe. Typical BMW proportions – a long bonnet, long wheelbase, set-back greenhouse and a short front overhang – create an exceptionally dynamic appearance even when the car is at a standstill. Muscular wheel arches and the powerfully expressive surface language reveal the BMW Concept M4 Coupe’s supreme performance capabilities at very first glance.

The coupe-like roofline flows into the muscularly designed rear end, which then adopts the contour of the roof. A rear spoiler lip is integrated into the trunk lid for optimum downforce. Thanks to this feature, the BMW Concept M4 Coupe not only has better downforce values, but when viewed from the side, also gains in volume and length, in athletic presence. Below it, the boldly shaped, muscular sill emphasizes the car’s sportive stance on the road.

A conspicuous detail on the car’s side panels is the redesigned M gill. This characteristic M design element constitutes a both sporty and functional statement. On the Concept M4 Coupe, the M gills incorporate the Air Breather, which together with the Air Curtain within the front apron serves to ventilate the wheel arches and facilitate better airflow values. Exclusively designed, bicoloured 20” M light alloys boasting the typical M double spoke design complete the sportive design of the car’s sides. The five filigree double-spokes rims with polished outer surfaces reveal M Carbon ceramic brakes.
THE REAR. The muscular rear end of the BMW Concept M4 Coupe gives visual indication of the car’s supreme power. The entire tail section boasts a sculptural and broad appearance. The large shaded areas beneath the spoiler give the rear end an even flatter and athletic appearance. At the same time, the flat taillights located far to the outside, the wide track and the powerfully flared wheel arches underscore the car’s stable stance on the road. Horizontal lines accentuate the car’s width, lowering the visual centre of gravity even further.

Within the tail section of the BMW Concept M4 Coupe, the design feature of the front apron comprising faceted surfaces is formally replicated and continued further. The interplay of surfaces and precise contours around the optical air vents further accentuates the rear end’s dynamic design. Twin tailpipes are a characteristic M feature on the rear end. The two pairs of carbon fibre tailpipes are encompassed by the sculptural rear apron. A carbon fibre rear diffuser completes the overall aerodynamics package. 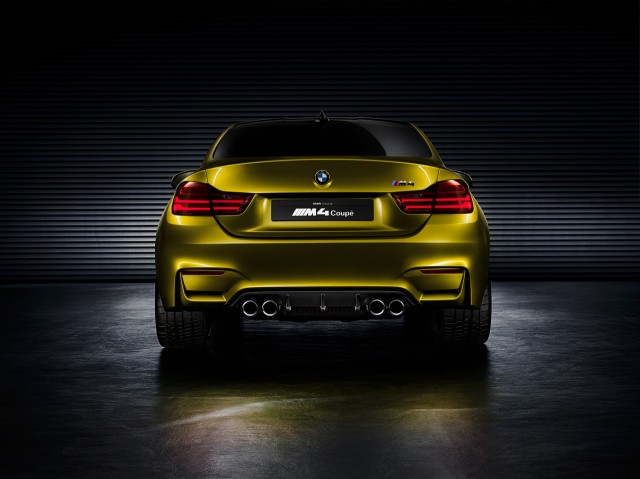