BMW and more importantly the BMW Group just killed the month of August in terms of sales. The BMW brand itself was up a whopping 46% for the month and saw BMW’s cars leading the way. The 7 and 5 Series were up a staggering 173% and 158% respectively. The 3er and 6er held their own with a 67% and 68% increases as well. And then there’s the X1 which officially out-sold the X3 and came within 200 units of doing the same to the X5. And to think BMW almost didn’t bring it state-side. We’re not surprised given aggressive pricing and our experience with the tall wagon. 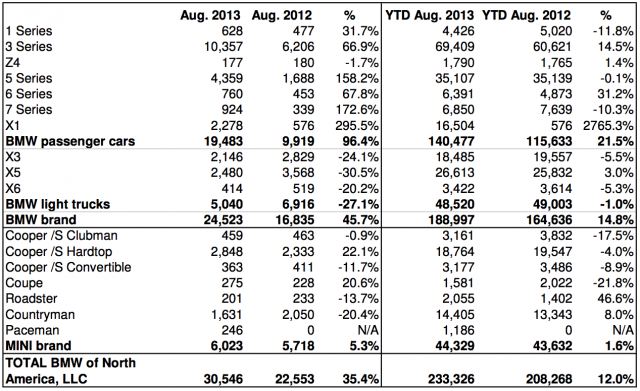 “This has been a summer of momentum, giving us a good tail-wind as we enter the all-important autumn selling season,” said Ludwig Willisch, President and CEO, BMW of North America, LLC. “The sales records set before the financial crisis continue to fall and with the arrival of the new X5 and the new 4 Series Coupe in the next couple of months, we are heading towards a strong finish for the year.”

In August, MINI used automobiles (including MINI NEXT certified pre-owned and pre-owned) reported the best month ever with sales of 2,182 automobiles, an increase of 23 percent from the 1,774 sold in August, 2012. January through August, MINI used vehicle sales are up 20.5 percent on volume of 14,480 compared to 12,015 in the same period of 2012.

BMW USA April Sales Up and Down