Daytona (US), 26th January 2014. BMW Team RLL completed the first half of the 24-hour race of Daytona (US) and are hopeful for a successful outcome to the maiden United SportsCar Championship (USCC) event. At half time in the race, Bill Auberlen (US), Andy Priaulx (GB), Joey Hand (US) and Maxime Martin (BE) are third in the GTLM class with their number 55 BMW Z4 GTLM. Car number 56, driven by Dirk Müller (DE), John Edwards (US), Dirk Werner (DE) and Graham Rahal (US), holds sixth after a longer pit stop shortly before the 12-hour mark.

Following a turbulent opening stages, the endurance classic in Florida kept on being an eventful affair. Several full-course yellows closed the field up again and again, with the gaps between the cars being neutralised. 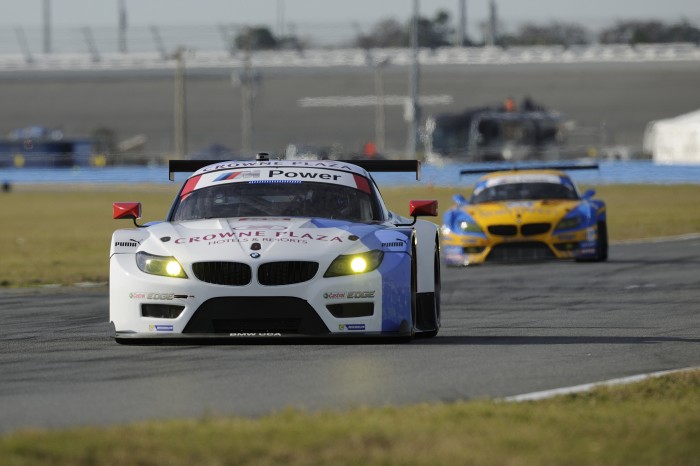 Not only is BMW Team RLL proving its fighting skills in Daytona, but the same goes for the Turner Motorsport team. While BMW works driver Augusto Farfus (BR), Paul Dalla Lana (CA), Dane Cameron (US) and Markus Palttala (FI) had lost many positions with their BMW Z4 GTD in the opening stages of the race, the four drivers were able to improve again to 11th by 02:00hrs in the morning.

John Edwards (Number 56 BMW Z4 GTLM):
“Racing in Daytona at night is definitely hard work, especially mentally as the traffic is really sketchy, so you always have to be on your toes and you can never relax. You still get a little sore from long stints, as you always do in a car, but the big thing for us is just to maintain what we are doing, because we don’t have the speed to really pass cars in our class. But if people keep making mistakes, then we can still find ourselves in a position for a good result.”

Joey Hand (Number 55 BMW Z4 GTLM):
“I like Daytona at night. It is one of the coolest places, as it is not dark out there, but it is a different kind of dark with a lot of lights, its neat. It is actually a very difficult race course just now. You have to be really careful as you have to throw some big moves on the brakes. The BMW Z4 GTLM does what we know it does: It gets into the corners really good. We are good on the brakes, we are good in the middle of the corner, but it is just not enough on the straights. So we have just got to work a little harder, be a little smarter and just roll this thing through the night.”

BMW Bringing Back the Art Car for LeMans 2010