Big winner this month? the X1 and the X3. Unfortunately for the X5 the ramp-up continues and it was down over 25% for the month. The 3/4 series was also up but that ends the good news for the brand. The big loser? The Z4 down almost 42%. Full stats below.

“The ferocious February winter in much of the country no doubt increased the desire for BMW SAV’s, but in keeping others away from the showrooms it is also building up future demand,” said BMW of North America President and CEO, Ludwig Willisch. “The expanding range of BMW models, as seen during the Sochi Olympics, especially the new 4 Series Convertible and Gran Coupe, the new 2 Series, and the soon to arrive all-electric BMW i3, are among the good reasons to look forward to Spring.” 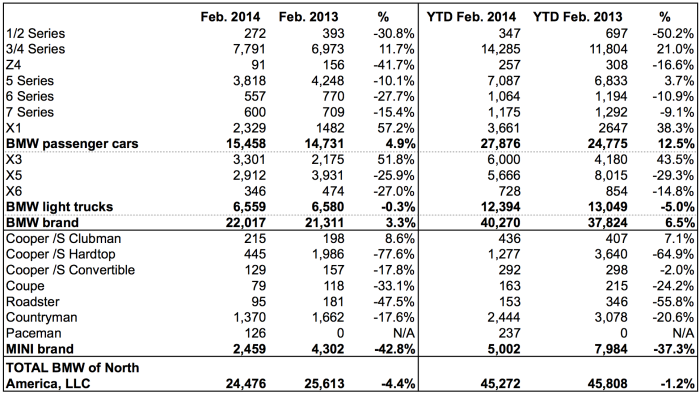 Global BMW Sales Up 2.2% for September

BMW NA Gets Serious in its Sales Battle with Mercedes