Second race, second podium: BMW Team RLL finished third and tenth in today’s 12 Hours of Sebring. Victorious twice before at the classic sports car racing endurance event (2011 and 2012), the 62nd edition of the longest half-day in motorsport relinquished only a third place finish to the No. 55 BMW Z4 GTLM for the team’s second consecutive podium of the 2014 TUDOR United SportsCar Championship. The result moves Bill Auberlen, Joey Hand and Andy Priaulx to the top of the Driver point standings.

The No. 55 Z4, co-driven by Bill Auberlen, Joey Hand and Andy Priaulx, took the checkered flag in third place – 5.144seconds from the second step of the podium – completing 286 laps of the 3.74-mile, 17-turn Sebring International Raceway. The trio finished second at the season-opening Rolex 24 At Daytona and now stand first (unofficially) in GTLM driver points. The No. 56 Z4 finished tenth. Co-driven by John Edwards, Dirk Müller and Dirk Werner, the car experienced a number of problems during the race and finished nine laps in arrears of the class winning Porsche.

Qualifying second (Dirk Müller) and third (Bill Auberlen), the team began its sixth Sebring race from an excellent position and ran strongly in the 11-car GTLM class for the first half of the race.

At the six-hour mark the No. 55 machine was running in third and the No. 56 in tenth after Werner was pushed into the wall by a competitor. Repairs over the next few hours ultimately cost the 56 machine nine laps.

The race was slowed by more than five hours of caution periods and the crack RLL strategy helped the No. 55 machine regain a lost lap caused by a malfunctioning pit speed limiter just past the midpoint of the race. With 2.5-hours remaining Joey Hand was in fourth, only two seconds from a podium position. He took over third on lap 276, putting a good chase on for second in the final ten laps of the race. The same could not be said for the No. 56 Z4 as the lost laps proved to be too many to make up and a tenth place finish was the result. 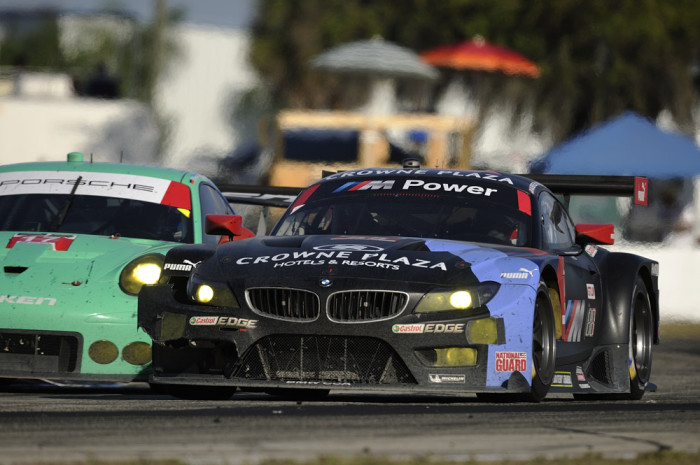 “Today was certainly a tough day for us in many respects,” said Bobby Rahal, Team Principal. “A third place finish by the No. 55 Z4 and now the points lead is a tremendous achievement given the ups and downs they went though the course of the race. Unfortunately, the day was ruined quite early for the No. 56 car. At the end we didn’t have the pace to catch the leaders, but now we head to Long Beach and a circuit much more suited to the strengths of the Z4.”

Gordon McDonnell, BMWNA Motorsport Manager commented, “Sebring reminded us it is always harder than expected, but at the end of the day it was a great result for BMW Team RLL. We head to Long Beach next month leading the GTLM driver points ready for the next step in the fight for the championship.” 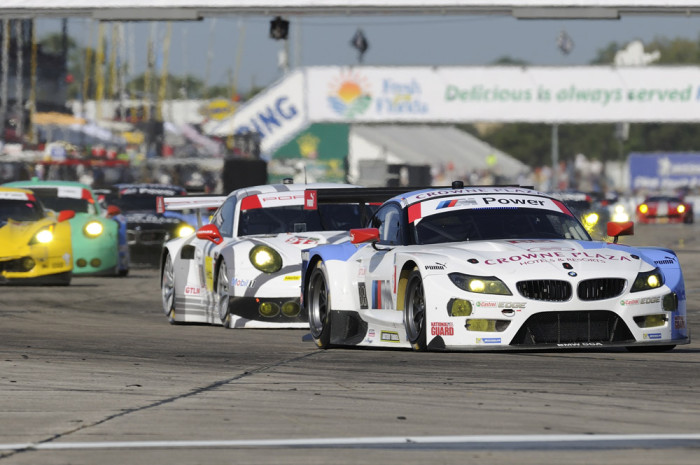 Bill Auberlen, driver No. 55 Z4 GTLM – “We ran into some of the worst luck I have ever seen. We had a great car, we were up to second place and then we dropped to third place. Then we got a speeding violation coming into the pit lane, and then we got three more back to back before we determined the cause, which put us a lap down. We fought back to the lead lap. Our Z4 was great. We tuned it and adjusted it throughout the race. It sustained some damage early on and had a big understeer. We tuned that out and we had something to go racing with and my last stint was very strong.”

Joey Hand, driver No. 55 Z4 GTLM – “It was an interesting race for sure. We just kept trying to make the car better and better. It wasn’t as good as I thought it was going to be, but it all came right and during that last twenty minutes I was thinking, “Oh boy, this is turning into another dog fight!” It seemed the Porsche was too far gone, but I thought we could get to the Viper. It wasn’t our race to win today, but the reason why we have won championships in this program is because we get what we can get, and that is what we did.”

Andy Priaulx, driver No. 55 Z4 GTLM – “My first stint was hardly a stint as I had so many safety cars. We had a bit of contact with a prototype which damaged the bodywork and there was then some understeer in the car. The team did a great job to re-balance the car, which luckily wasn’t badly damaged. Then Joey jumped in and had a great couple of stints. They bolted me in and I had a really good fast stint with good lap times. We had to come in a couple of laps early as the bonnet was a bit loose and had to be taped. We were in the ball park and not far off where we needed to be and I thought if we can get a couple of safety cars now we will be back in the hunt. I was also pleased that when I got out of the car I had set the fastest lap time in it up to that point. My job was to bring the car back in one piece, which I did. There were a couple of crazy re-starts as there were so many cars out there and you were locked in the battle from the moment you got into the car – I have never had it like that before. It is full ten tenths, it is fun and it makes you sharp and I am loving it.” 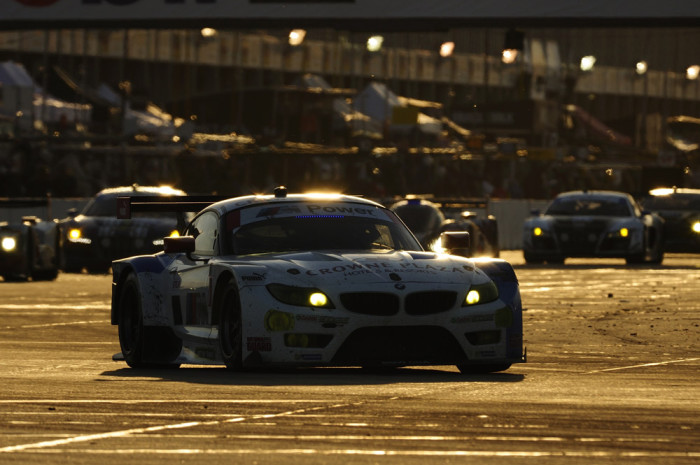 John Edwards, driver No. 56 Z4 GTLM – “There is not much we could have done today. Things that were not expected to happen ultimately put us in the situation where we were out of contention. It’s really too bad because we had a strong car. We saw the No. 55 finish on the podium and we think we would have been right up there too.”

Dirk Müller, driver No. 56 Z4 GTLM – “This was one of those races which ultimately ended quite early for us. We stayed positive and were hoping that we’d get the laps back with all the caution periods. Unfortunately, it didn’t work out. Congratulations to the 55 guys!”

Dirk Werner, driver No. 56 Z4 GTLM – “Unfortunately we had too many incidents today. The hit from a Porsche that turned us in the wall put us back a number of laps and we never really recovered. I hope the rest of the season will be better for Dirk and John.”

An Inside Look at BMW\’s Driving Simulator