Based on sources and our favorite public/private source Herr26, we have pulled together the best look yet at both the new 7 and 9 Series. And since both of those cars will debut key technologies for the rest of the BMW range, consider this as an early look also at the next generation 3 and 5 Series.

The last time BMW created a flagship concept car it was the Concept CS, a car which heralded the new form language that eventually made its way throughout the range. The Vision Luxury does the same thing both inside and out. The Concept CS was created to show where BMW thought the market would go. The Vision Future Luxury shows us where it is. 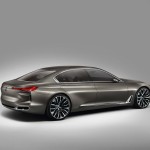 While the VFL is meant to show a preview of the new 9 Series in both design and size, it’s also very interesting preview of the next generation 7er – scheduled to launch in June 2015. Many of the design details showcased on this car are interpretations from the next 7er, as are many of the interior features. And while the interior has many conceptual touches, it’s all based in technology available today.

According to sources, if you follow how the original BMW i8 progressed through the BMW i8 Spyder to the production car you’ll get a sense of how this car will ultimately lead to the 7 G11 7er. The 7er will follow the same transition. Specifically look for separate driver and passenger displays on the final G11 2016 7 Series and a advanced HUD that’s hinted at in the concept. 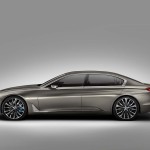 According to sources even the overall shape is reminiscent of the new G11. And that new shape will add an significant insight into the 2016 G30 5 Series. Both will feature a more athletic look that is meant to speak to the lightweight construction increased dynamic abilities of both cars. Yes the 9, 7 and 5 Series will feature massive amounts of CFRP within the structure of the car as well as key exterior components.

In many ways that’s the real story here. BMW is aiming to integrate carbon fiber into each of these cars in a big way at the chassis level (similar to the i3) without a noticeable increase in price. If you look how Audi is pricing it’s new special edition RS7 with extra CF bits ($40k more than the standard car) it’s easy to understand the production advantages that BMW can use thanks to it’s investment in CF production for the i3 and i8.

Consider this. Mercedes has gone on record by saying that the 2020 S Class will feature substantial carbon fiber use throughout. BMWs moment comes in June 2015.