The following interview comes to us from M-Power.com

It is generally the case that the top model of the regular series is lighter than the M automobile that is derived from it. Why is this so? Historically, the M automobile always used to weigh about 100 kg more than the BMW vehicle it was based on.

So have you expanded your lightweight construction activities with each generation of the BMW M3?

Yes, we have incorporated additional lightweight components with each successive generation of the BMW M3.

Our first intensive involvement with the theme was with the BMW M3 CSL. This was the first time that we employed a roof made of carbon fiber reinforced plastic, or CFRP; we also developed extremely light chassis components, such as the front axle anti-roll bar.

Lightweight elements can also be found in the recently superseded generation of the BMW M3. Components that were previously used, such as the CFRP roof, were also incorporated in this M automobile and further parts added, such as an aluminium bonnet and front side panels made of synthetic material. In this way, we expanded our lightweight portfolio. Our aim was always to design components to be lighter than those in the basic BMW model. However, with the previous generation of the BMW M3, we were still 60 kg above the weight of a BMW 335i. But when comparing weights, it is always important to be a little bit cautious, and take into account the overall equipment fitted in the respective vehicles.

Of course it remains the case that we are forced to incorporate parts that are heavier than the corresponding parts of the basic BMW vehicle, on grounds of vehicle performance. A rear axle differential with locking control and power generation on the level of a BMW M4 is simply heavier than the non-locked differential of a BMW 435i.

In the new BMW M3 and BMW M4 we have made considerable advances in terms of lightweight construction, far more than ever before. As well as the familiar lightweight parts, we now have modules such as a CFRP driveshaft, a CFRP precision strut in the engine compartment, and a carbon fiber SMC boot lid. Taken together, these lightweight measures have lowered the vehicle weight by 100 kg. This more than compensates for the aforementioned weight increases.

This is also apparent from the fact that the BMW M4 Coupe displays a weight advantage of 83 kg compared with the manual BMW M3 Coupe from the previous generation. 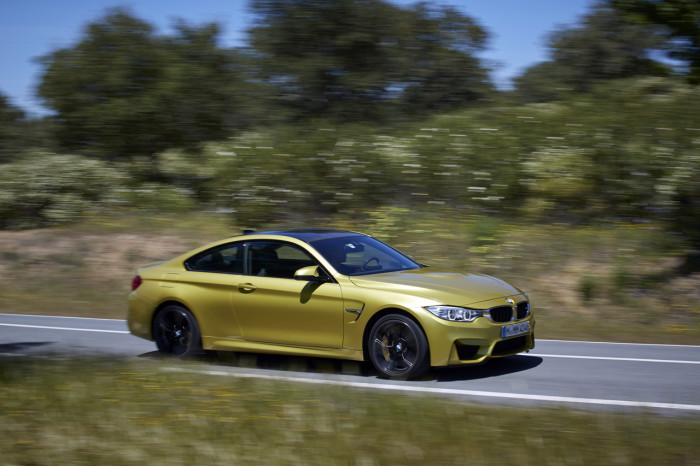 There are several factors involved.

If you wish to improve a vehicle by lowering its weight, the question you need to ask yourself is: where and how can this be done to the greatest effect? If you restrict your view to the readout from the scales, it may not seem important in what part of the car you manage to save e.g. 5 kg. But this is most definitely not the case from the point of view of driving dynamics.

If you are simply talking about masses in motion in a rear-wheel drive car, the answer is obviously to reduce weight as far towards the top and as far towards the front of the vehicle as possible. This has the effect of increasing the proportion of the load on the rear axle, and in turn, the driving dynamics potential, now that the vehicle’s centre of gravity has shifted backwards and downwards.

What is the reason for the C-SMC boot lid of the BMW M4 Coupe?

Unlike the sedan or convertible, the coupe would have required a large spoiler at the rear for its aerodynamics, but for design reason, we chose to employ a specially designed boot lid.

And if we are going to redesign a component, then of course we also want to make sure it is as light as possible, with its own unique and powerful form language.

What is the second factor that makes the lightweight concept intelligent?

The question of whether the weight-reduced mass is ‘only’ involved in acceleration, or if it is also an unsprung and/or rotating mass.

From this point of view, the optimum solution would be to reduce the weight of both the brake disc and the wheel, as both are accelerated, unsprung and rotating masses.

What makes the reduction of an unsprung mass so interesting from the point of view of vehicle dynamics?

For example, if you drive over a bump, dynamic wheel load fluctuations occur, which impact negatively on the car’s traction. Small unsprung masses such as brakes, drive flange hubs, or wheel rims etc. are an important basis by which the suspension/damping can ensure the lowest possible wheel load fluctuations.

Why is it that these wheel load fluctuations have a negative impact on traction?

When a wheel drops into a road irregularity, the wheel load falls. At this moment, the wheel is only able to transfer a smaller amount of longitudinal and/or transverse forces through the postcard-sized contact area – which can result in a loss of traction if you happen to be moving in the limiting range of the vehicle’s longitudinal or lateral dynamics. The lower the wheel load fluctuations, the calmer the car, the easier it is to control, and the faster it can go. To achieve this, it is necessary to reduce the unsprung masses and damping must be of optimum dimensions. 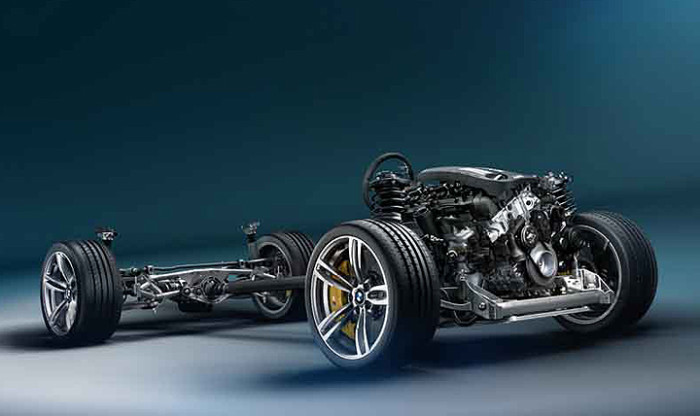 And the rotating masses?

There are two reasons why rotating masses are important for a car’s acceleration behavior. First of all, they of course increase the overall accelerating mass of the car. In so doing, they should have the smallest possible rotational inertia torque. This means that a minimum of power is wasted in the rotation between the drive train and the wheels. This ensures that the vehicle has an agile response.

What is meant by the inertia torque?

One way to demonstrate that energy flows into the rotational acceleration of a wheel is to observe a bowling ball. When the ball is first dropped, it goes into a sliding motion. Then as it starts spinning, it moves along more slowly as the rotational speed increases, until the ball is finally rolling along the floor at uniform speed.

It isn’t just the inertia torque but also the speed gradient – the rate at which the rotational speed is changing – that determines the power required for acceleration. This explains why it is particularly interesting to reduce the rotating masses in an engine, because this is where large differences in rotational speed can be achieved in a short space of time.

Yes it does – the selection of the right material. Depending on the conditions, there may be good reason to select either CFRP, aluminium, magnesium, titanium or steel.

Using carbon fiber reinforced synthetics in the CFRP precision strut for example has several advantages. At about 1.5.kg, this very expensive component weighs only a fraction of what it would if it were made of steel. Not only that, it is extremely compact and fits well into the engine compartment. An aluminium strut with the same rigidity would have such as large cross-section that it would come into contact with the bonnet.

The new BMW M3 and BMW M4 have undergone a number of measures for increasing the rigidity of the body in a way that typifies an M vehicle’s driving precision and vehicle dynamics.

Are you referring to the oft-mentioned factor of torsional rigidity?

Torsional rigidity has been increased by about 20 % compared with the previous generation, and it is obviously also a relevant factor. However, from the point of view of precise wheel control, it is not the decisive factor, considering that the opposing compression and rebound movements of the wheels on the front and rear axles are also a form of torsion, and one that far exceeds the level of torsion in the body.

However, torsional rigidity does make it easier to tune the chassis – something which is of particular importance in motor racing, since it is necessary to perform tuning for each and every race. A further aspect is that it increases the solidity of the body, to prevent creaking and other noises in the car’s interior.

However a factor that can be a distinct advantage for vehicle dynamics and precision is lateral rigidity. This means that viewed from above, the car should be subjected to a minimum of temporary ‘banana-like’ lateral deformation.

Why is this particularly undesirable?

Because the wheels then perform unwanted steering movements and the car no longer moves cleanly in the intended direction.

The large, typical M wheels with their high grip potential must be controlled precisely on the road. This requires a cleanly designed kinematics with a sport-oriented definition, plus elastokinematics that offer as much lateral rigidity as possible.

Altogether, we were able to raise the lateral rigidity of the BMW M3 and BMW M4’s body by around 30 % compared to the high level of the previous model.

Interestingly, such measures are not only helpful when driving at top speed through the ‘Fuchroehre’ at the Nuerburgring’s north loop. There are also considerable benefits in the case of comparatively low loads, for example when going through fast motorway bends with small steering movements.. It is therefore very important that clean control of the wheels is maintained by a sturdy body with a high lateral rigidity. This has a considerable impact on straight-line driving and directional stability, and the car responds with that much more precision and supremacy. It simply goes exactly where you want it to.

Is it this that determines the characteristic ‘precision’ of a M automobile?

Yes it is an important part of it. When you turn the steering wheel, push on the accelerator or activate the brakes, you are exercising an impact on the contact area between the tires and the track. It is either turned or acted on by braking or accelerating.

A great number of mechanical processes take place between the driver’s hands and feet on the one hand and the contact surface on the other. Engine and drive train, chassis, steering gears, bearings, wheel rims, tires, etc. are all required to precisely transmit the driver’s instructions, to ensure that the vehicle displays defined reactions.

The driver is generally neither aware of nor particularly interested in the details of these processes. What he notices is whether the car responds with the precision he expects. If he accelerates, the car immediately drives faster. So the better the response matches the driver’s expectations, the more faith he will have in his car and the more familiar he will become with it.

It is as if you were one with the BMW M3 or BMW M4 – you get in the seat and you immediately feel comfortable, you sense the car and feel the road, and you can move at great speed, for example on the race track. This is what has always characterized a BMW M3. And it determines the character of the new BMW M3 and BMW M4 to an unusually high degree.

Mr. Staiger, thank you for the interview.