BMW vs Audi. It’s been talked about for years across many different models and price points. But perhaps the most common debate is the 335i vs the S4 or the 435i vs the S5. But there’s a problem with the latter – the S5 really isn’t a great car. Thus it’s a fight that BMW seems to win every time across every publication. Instead the one car that has consistently given BMW headaches since its release is the latest four door S4. So with a 435i xDrive in our possession for a week we made some calls and got our hands on a 2014 DSG equipped S4 and headed to rural Western Michigan for some of the best roads the midwest has to offer. 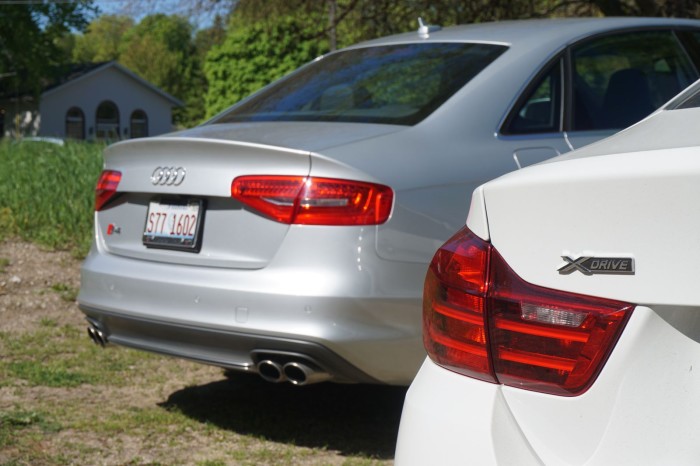 The first thing you notice about the 435i xDrive is that it’s ruthlessly efficient at almost anything you throw at it. Equipped with the ZF 8 Speed automatic, our test car proved itself undeniably competent at being fast and comfortable. That’s not damning with faint praise mind you – this is a big GT in our eyes and at its core has to deliver speed and comfort across long distances while being able to dance a bit in the twisties.

As you’d expect the all wheel drive xDrive system robs the 435i of much of the drama you typically enjoy in a rear wheel drive 35i equipped BMW. Whether it be a standing start or a jab of the throttle mid-corner, the 435i is the epitome of controlled urgency. Even in dynamic traction mode there were only hints at the systems’ rearward bias under the most extreme situations. But those hints were a window into the soul of the car that served to remind you of what lies beneath all the technology and extra drivetrain. It both frustrated and reassured.

Perhaps the biggest surprise was the way the 435i xDrive understeered into the corner. Yes all non-M BMWs do the same. However where the standard 435i would overcome the oversteer with a jab of throttle, that same jab served to send the xDrive machine further out into the marbles. While a quick lift of the throttle brought everything back inline, it was a reminder that this car was designed to be a four season tool rather than a track weapon. 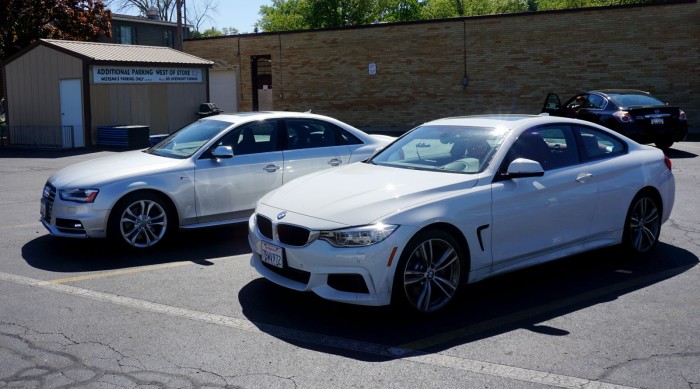 Despite this, you feel in control with the 435i in a way the S4 can’t quite match. There’s a level of precision that you have in the steering, throttle and brake applications that gives you a touch more confidence – especially in Sport or Sport +. While the 435i is no M product, you can immediately tell that it’s based on healthy stock – an exceptional rear wheel drive chassis designed with perfect weight distribution in mind. The S4, no matter what has been added, can’t quite match that given its origins as a front wheel drive car with an engine placed so far in front of the chassis.

That’s not to say the S4 doesn’t entertain when pushed. The S4’s Quattro system is particularly effective at hiding its inauspicious front wheel drive origins. From immediate turn-in to the limit, the S4 felt surprisingly neutral. It also surprised with its suspension tuning and damping – both doing an excellent job hiding the weight of a 3,858 LBS four door. It wasn’t until about 8/10s when it became clear how well Audi’s engineers had done their job. The S4 began to simply understeer in a controlled and predictable manner around the same fast sweeper that the 435i just dug into and hung onto. It may not have been as pretty as an M car in its body control, but it was more adjustable and ultimately more rewarding than the S4 thanks to the level of precision built into the chassis and driver inputs. 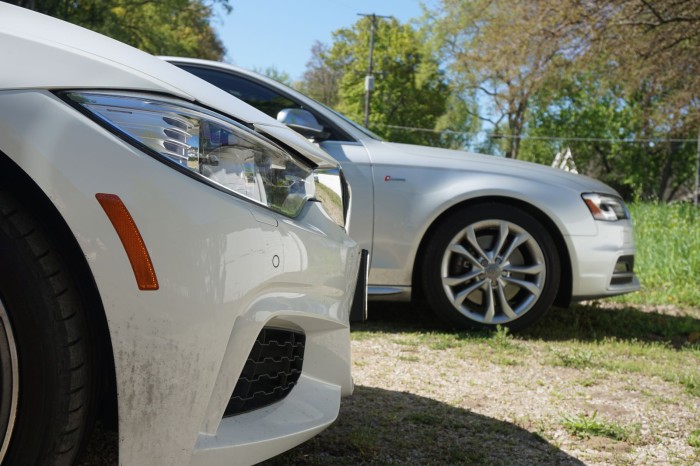 One area that Audi has almost caught up to BMW in is steering feel. As we all know BMW has progressively lost feel in steering since the high-point of the E36. For various reasons Audi has progressively lost less of it creating closer parity between the two cars than you might expect. Both cars have enough feel through the rim to give a basic understanding of what’s happening at the contact patch but don’t give you the ultimate level of information that an M car would. Head to head the 435i probably had a touch more fluidity to it but the truth is that both get similar good but not great grades.

Interestingly the S4 had quite a bit more play in the suspension and body roll in the corners. But it was all rather well damped and ended up feeling more like a E46 in BMW terms than the modern 3 or 4 Series. It was refreshing in some respects even if it was limiting when pushed hard. 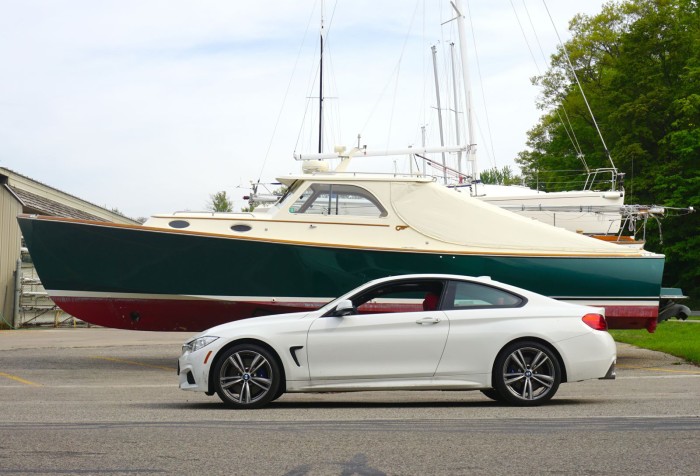 As expected the 435i with the variable suspension turned up to Sport + was more aggressive than the Audi and did a convincing job until about 8/10ths. It was while rounding a high speed sweeper that the inevitability of 3610 lbs set in and the outer rear of the car began to bend to the will of physics. All expected and not necessarily something 99% of owners would experience. But it was a clear signal that the 435i is no M car. Or even an M Performance car.

And that’s the problem here. The 435i hasn’t been fettled by an in-house performance division with the enthusiast in mind as the S4 has. The best example of this is the Audi’s excellent 7 speed DSG. We like to talk about the 8 Speed ZF on this site for good reason. It’s an excellent automatic that delivers day to day drivability while giving the enthusiast matching revs, quick shifts and just a touch of drama when needed. But in reality it’s not a match for the DSG in the S4. With the dual clutch, the Audi not only shifts and matches revs quicker and more effectively, it also has more character when doing it. There is a sense of occasion in the Audi with every manual shift that the 435i automatic can’t match. 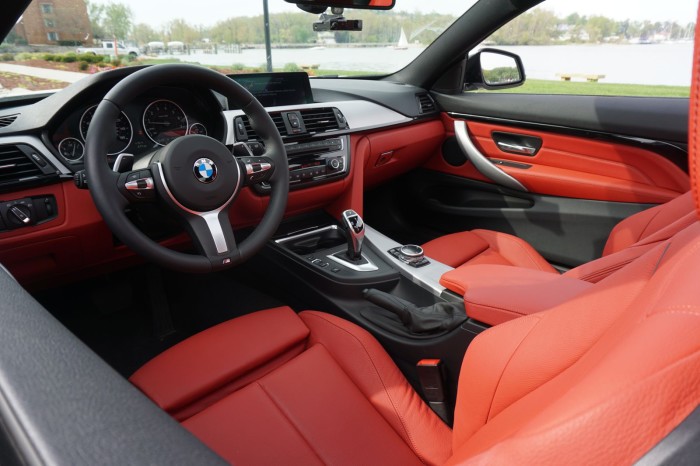 In addition to the transmission differences, the S4 also produces 333 hp vs the 435i’s 302 hp. But given the weight differences between the two they are effectively equal in straight-line performance. The key difference between the two is how the power is delivered. The Audi’s Supercharged V6 is admirably smooth in its power deliver and is mated well to the DSG. But it’s the BMW’s inline six that feels more eager to rev while delivering in a way only an inline six can. Even with the dual-stage turbo sapping some of that character it still feels and sounds like a classic BMW heading up to the 7000 rpm redline.

While styling is subjective, quality is not. The Audi has an excellent interior both from a design stand-point and in the materials that make it up. From the key fob to the quality of the plastic and other materials, it’s clear that Audi takes advantage of the VW Group’s massive purchasing power to bring higher-end and pricier materials into cars with modest price-points. While the 435i’s interior is generally good (and in some ways exceptional) there’s still a very small gap between the two. It’s much closer than it was in years and models past but it’s hard to argue that the 3 and 4 Series have completely caught up with cars like the S4. 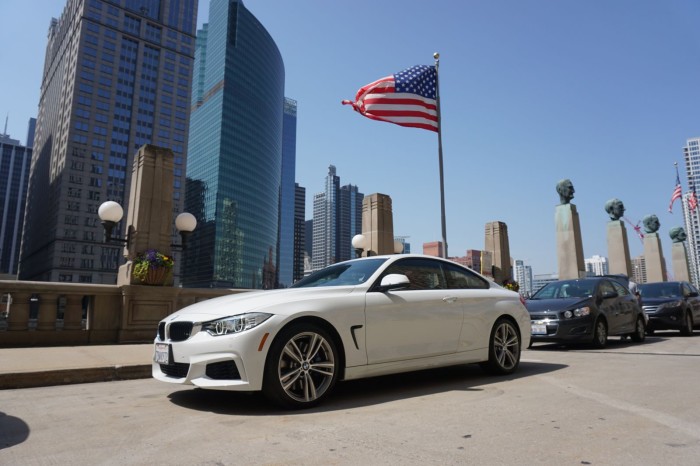 With the 435i and the S4 we have two cars that represent different points within two manufactures model ranges. And in some ways they serve to expose the different strategies that BMW and Audi are taking with their near performance cars. BMW is right to have created junior M offerings with the M Performance range as the S4 is clearly more focused in some ways than even a properly specced 335i or even 435i. But even with the DSG and other Audi Sport goodies, our automatic and xDrive equipped 435i held its own in most ways and flat-out beat the Audi in others.

What would an M435i be like? If the M235i is any indication, excellent and a clear winner against the S4. But that’s neither here nor there. What we do have is an excellent 435i xDrive that in our time with both cars, narrowly beat a similarly excellent S4. 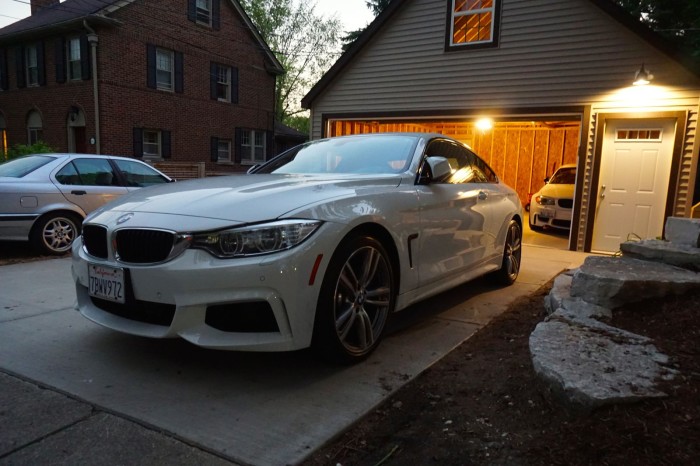 But the real winner in our minds isn’t here. If you’re comparing the 435i vs the S4, it’s not the automatic xDrive that would be the enthusiasts choice of course. No that’s the rear wheel drive manual equipped 435i. And I’d be willing to bet that that car would very well steal the show and be our runaway winner if it went head to head with these two cars.

Perhaps the only car that could beat it (as a daily driver) might be the four door version – the 435i Gran Coupe. If only BMWNA offered it with a manual that is.