The Goodwood festival of speed is a great event. But to us it’s the Revival that feels more special. It’s an amazing combination of priceless cars racing at classic track combined with period dress, understated advertising and a complete re-creation of everything there is to love about racings from the middle of the last century.

As you’d expect BMW is well represented with Rolls Royce, BMW, BMW Motorad and Mini brands being present. Check out the full details below and the live feed above. 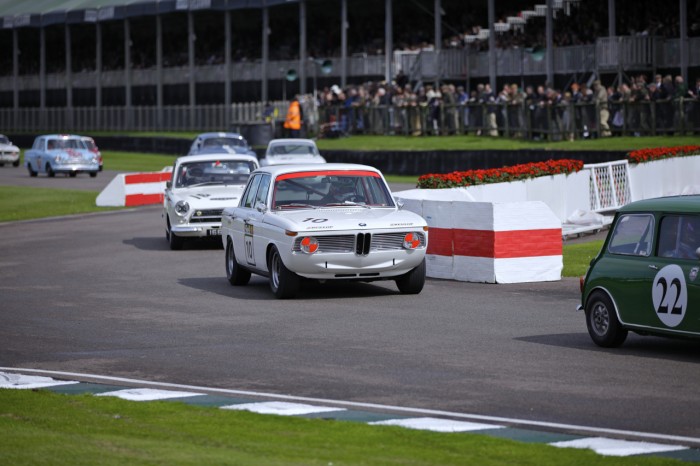 Official Release: BMW Group Classic and visitors to the Goodwood Revival 2014 are preparing to embark on a journey together back into the middle of the previous century. The globally popular event for fans of historic motor sport will once again be shining its spotlight brightly on the 1940s, 1950s and 1960s. BMW Group Classic is using the authentic surroundings of the March Motor Works garages to present BMW, MINI, Rolls-Royce and BMW Motorrad cars and motorcycles from the period in question. Added to which, historic motorcycles from BMW will also get involved in race action on the Goodwood Motor Racing Circuit over the three days of the event (12 – 14 September 2014). They include a BMW RS 54 from the BMW Group Classic collection. Launched 60 years ago, the RS was the brand’s first victorious motorcycle of the post-Kompressor era, and its engine was also used to power the sidecar machines which in 1954 embarked on an unprecedented run of World Championship victories lasting for two decades.

The Goodwood Revival takes place on the estate of the Earl of March in the southern English county of West Sussex, and has been a fixture on the calendar for fans of historic motor sport since 1998. It also serves as an annual get-together for legendary drivers and riders and their erstwhile racing machines. The event harks back to the car and motorcycle races which took place at this venue between 1948 and 1966. And over the years, it has earned itself a reputation as a suitably stylish classic car and motorcycle meeting which brings the motor racing atmosphere of the post-war era back to life. The carefully selected fields of cars and bikes for the races and the faithfully recreated ambience play a vital role here, as do the drivers, riders, team members and visitors kitted out in the clothes of the period.

This year’s meeting will include a spectacular tribute to British racing driver and three-times Formula One world champion (1969, 1971, 1973) Sir Jackie Stewart, whose career began 50 years ago with tests on the Goodwood Racing Circuit.

Stewart was signed up to drive in Formula 3 at the time, but just a year later he was lining up for his debut race in the blue-riband category of motor racing. At the Goodwood Revival 2014 the 75-year-old will be honoured with a trio of parades starring numerous cars once driven with distinction by the Scot. Other protagonists in the event will be a Maserati 250F, which made its Formula One debut in 1954 with victories in the first two races of the season, and the Jaguar D-Type which likewise turned its first wheels on the international motor sport stage 60 years ago. Both models will be celebrated with special races bringing together the cars and their rivals from yesteryear.

60 years ago the BMW 502 with V8 engine, the world’s first light-alloy unit for series-produced cars, hit the roads.
The Goodwood Revival 2014 will also cast the mind back to successful touring cars powered by V8 engines. BMW Group Classic has warmed to the theme with a retrospective of the “Baroque Angels” from the 1950s and their flagship engine. In 1954 the luxurious BMW 502 was fitted with the world’s first volume-produced light-alloy engine – a 2.6-litre V8 unit with aluminium crankcase and cylinder head developing 100 hp. And a replica showroom based on the design of the times gives visitors to the Goodwood Revival 2014 an impression of how the sales staff back then went about extolling the virtues of the eight-cylinder BMW 502 Sedan and BMW 503 Convertible. The technical details of the lightweight V8 – which produced up to 160 hp in later versions – are illuminated with the help of an exhibit engine. 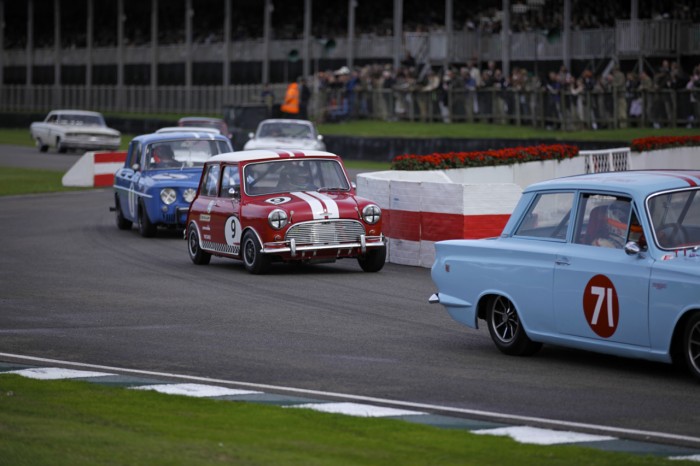 50 years ago the classic Mini tasted victory for the first time in the Monte Carlo Rally.

The area of the March Motor Works given over to the MINI brand will be a blur of spanners and bolts over the course of the three-day event. A scene replicating in detail a workshop run by the British Motor Corporation (BMC) motor sport department in the 1960s will rekindle the magic of the classic Mini’s maiden overall victory in the Monte Carlo Rally in 1964. And the very car that carried Irish driver Paddy Hopkirk and his British co-driver Henry Liddon to glory against far more powerful rivals will also be on display – clearly identified by its now almost legendary license plate 33 EJB.

Bespoke luxury in the style of the 1950s: the Rolls-Royce Silver Wraith with bodywork by Hooper & Co. Coachbuilders.
This year the largest, central area of the March Motor Works is occupied by a 1950s-style replica of a body manufacturing facility serving the world’s most exclusive and luxurious cars of the time. For half a century, Hooper & Co Coachbuilders Ltd. produced bodies for chassis built by Rolls-Royce. The then customary partnership between car makers and body manufacturers enabled the construction of extremely high-quality vehicles adapted precisely to the personal requirements of the customer at hand. Rolls-Royce models with bodies made by Hooper have always been regarded as the exceptional product of a shared commitment to “strive for perfection”. At the Goodwood Revival 2014, a 1956 Rolls-Royce Silver Wraith with Empress Line body by Hooper will provide a fine all-round showcase for the body and interior manufacturing of the day.

The Rolls-Royce brand has epitomised the finest British tradition of top-end automotive luxury for 110 years now and its partnership with Hooper dates back 105 years. Hooper made its name as a manufacturer of carriages used, since the middle of the 19th century, by the British royal family, among others. And Hooper soon also stepped up as a purveyor to the royal household when carriages became motorised. Of the only 18 examples of the Rolls-Royce Phantom IV produced exclusively for heads of state, one in three had a body supplied by Hooper. The final example of the breed, a Landaulet model, was delivered to Queen Elizabeth II in 1959. The same year brought an end to the partnership between Rolls-Royce and Hooper. Self-supporting “monocoque” bodies were also establishing themselves in the upper echelons of automotive construction. And without a separate chassis to work with there was no future for bespoke body manufacturing. All of which makes Rolls-Royce models with a Hooper body even more widely coveted and admired collector’s items today.
BMW Motorrad: memories of the hugely successful year of 1954.

1954 has a particularly special place in the history of BMW Motorrad. A sales record was set 60 years ago, with more than 30,000 units finding new owners – and it was a record that was to last until 1977. Added to which, the BMW RS 54 was also unveiled that year, ushering in a new era in motorcycle racing.

Changes to the regulations governing international racing had spelt the end for supercharged “Kompressor” engines. And the new model – which weighed just 130 kilograms, developed 45 hp and was capable of almost 200 km/h (124 mph) – was soon enjoying impressive popularity, especially among private owners. Their newly designed boxer engine with vertical shaft drives and overhead camshafts caused quite a stir, in sidecar racing in particular. By 1974 BMW had notched up 20 manufacturers’ world championship titles in sidecar racing, and sidecar machines with BMW engines also set a host of endurance and speed world records. 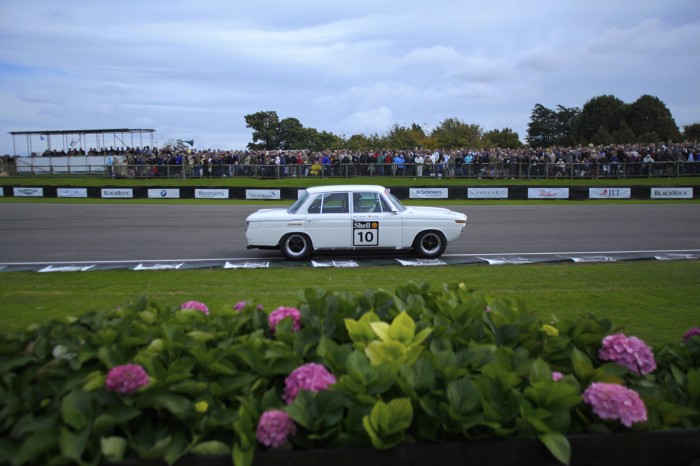 Visitors to the Goodwood Revival 2014 can also cast an eye over the historically-inspired mock-up of the British importer’s warehouse, where they’ll see a demonstration of the unpacking and inspection of incoming motorcycles. This includes the unveiling and presentation of numerous successful BMW Motorrad models built between 1949 and 1960. Among the machines lining up for the Barry Sheene Memorial Trophy race is a BMW RS 54 from the BMW Group Classic collection. It will be ridden by Wolfgang Meier, the nephew of Georg Meier, whose achievements included victory in the Tourist Trophy on the Isle of Man 75 years ago on a BMW motorcycle.

The BMW Group Classic presence at the Goodwood Revival 2014 will include a form of hospitality brimming with tradition; visitors will be invited to stop by at an historic festival tent inspired by the Oktoberfest in Munich and sample some Bavarian specialities. Plus, they will also have the chance during the event to visit the Rolls-Royce factory just a few miles away.

BMW Team RLL Has a Rough Weekend in Canada