The X3 has slowly come into its own to become the volume seller of the BMW SAV range. Thanks to it’s handsome exterior and well appointed interior the second exterior has compared well against the competition. However that competition isn’t standing still. The Next generation G01 X3 will follow along the same path of the F25 but with bold new styling, higher levels of equipment, power and efficiency.

AutoBild brings us the best look yet with they’re excellent (and well informed artists) with two G01 X3 renderings seen here. What it shows us (if accurate and we believe they are) is a design language that is evolving to become more aggressive, more angular and more muscular. We expect such features as X5-like air breathers behind the front wheels, optional LED headlights and plenty of 19″ wheel options. 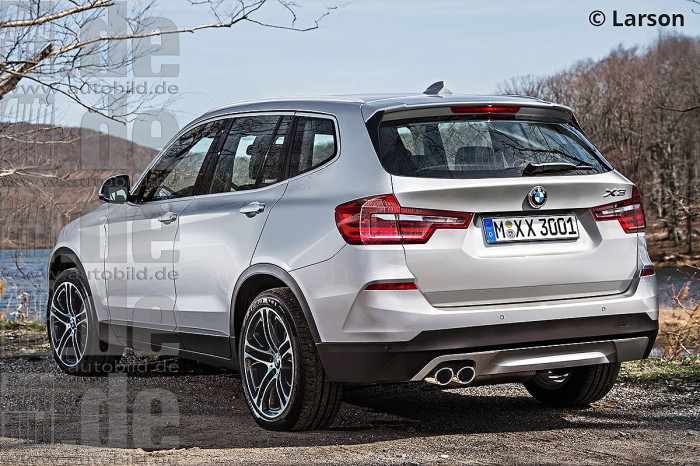 The X3 will reportedly grow slightly in size but thanks to increased use of lightweight materials (not likely CFRP) we expect weight to be reduced or be roughly the same as the cure F25 X3.

In the US expect the X3 28i to continue with an updated 2.0L four cylinder. On the top-end there are rumors that BMW could bring a M40i model to market in place of the 35i

The third-generation BMW X3 is due out in 2017. Built under the codename G01, the 2017 BMW X3 will offer an M40i model and a full M-developed X3 M. BMW X3 M40i will be just the start however. Sources have been telling us for years that BMWM is aiming to bring it’s version of the X3 to market in the form of the X3M. Similar to the X5M and X6M, the X3M wouldn’t be the pure sporting machine of the M3 but would instead bring high levels of performance not typically seen in a mid-sized crossover. Powered this car will likely be an iteration of the S55 carried over from the M3/M4 producing around 425 hp.

BMW will debut the new X3 in 2016 and sales should begin late that year or early in 2017. The X3M will likely bow a year later.

The BMW M2 is Real and is Really Happening

by Gabriel Bridger
i3 Rumor

Spied: US BMW i3 Getting a Sunroof