If motorcycle manufacturers are to be believed, anything with even a hint of “adventure” to it is that much more likely to sell. You can see it across the motorcycle landscape with both serious and dilettante adventure machines popping up in showrooms around the world. While BMW didn’t exactly invent the Adventure segment, it’s hard to argue that they didn’t perfect it with the class-defining BMW R1200GS and GS Adventure models, which month after month are BMW’s best sellers.

Yet in recent years the Adventure segment has been further divided to include a small class of bikes that blur the lines between sport road touring and traditional, go-anywhere Adventure bikes. Machines like Triumph’s Tiger 1200 Sport (and the Tiger 1050 before it) and the Ducati Multistrada are essentially superbikes that have been reconfigured with an Adventure stance. Traditionally these machines have been based on the sporting powerplants found within their respective marques. The Tiger originally inherited its 1050cc triple from the Triumph Speed Triple, and the Ducati Multistrada has long shared power plants with its Monster brethren. With the Multi about to go Panigale-powered, the time is ripe for BMW to bring its own “Sports Adventure” model to market. Enter the BMW S1000XR. 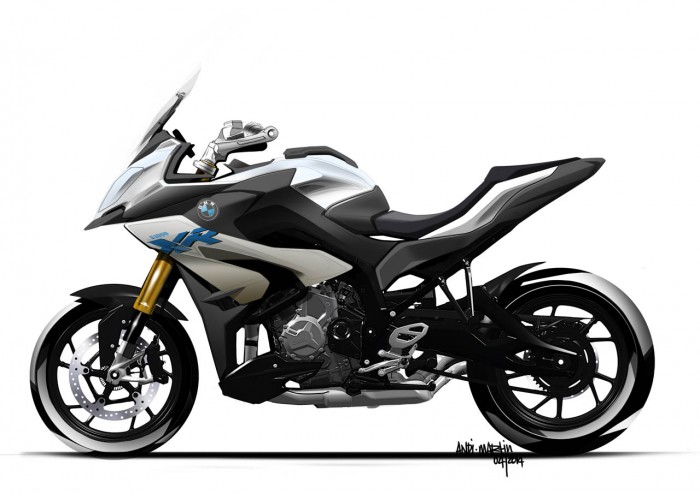 The S1000XR takes the Panigale rivalry and attempts to head Ducati off at the proverbial pass. Obviously BMW is no stranger to the Adventure market, and the inline four cylinder in the S-series line of bikes has proven itself as a serious performance contender. With full-fairing sport versions in the RR and HP4, to the naked incarnation in the R, the S1000XR rounds out the BMW S-series bikes with a touring orientation. In short, BMW set out to create the most performance-oriented touring bike they could. With key expertise in all these blended areas, the formula seems pretty simple. RT + GS + HP4 = XR. Now let’s go beyond the lettering and see what this new would-be class leader has to offer. 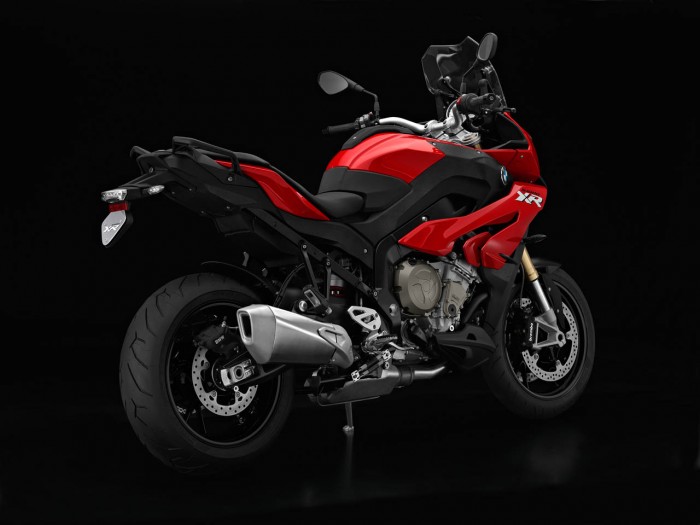 The inline four-cylinder engine on the new BMW S1000XR is derived from the S1000R roadster. Tuned down from the HP4’s nearly 200hp output, the XR makes 160 hp (at 11,000 rpm) and generates a maximum torque output of 83 lb-ft (at 9,250 rpm). Touring is all about low-to-midrange punch, so BMW has tuned the S1000XR accordingly. Leaving some headroom in that tuning should also help maximize fuel economy and long-range reliability. 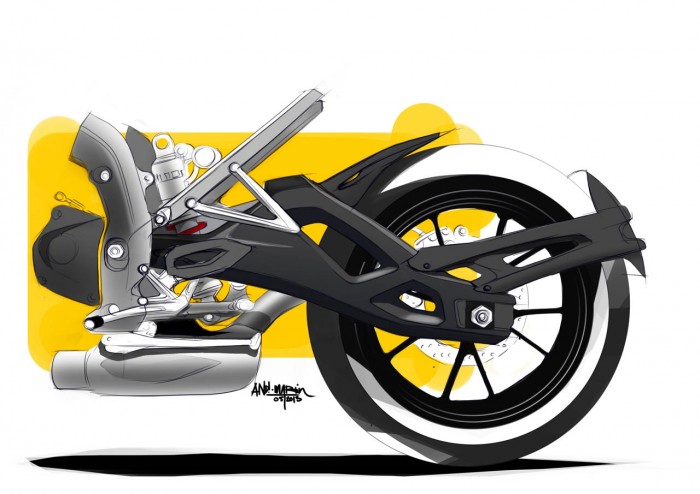 The S1000XR comes standard with ABS, two riding modes, as well as ASC (traction control). Also included are two “pro” riding modes inherited from its track-oriented siblings. Specifically, Dynamic Traction Control (DTC) and ABS Pro. These two tiers of rider aid let the operator choose how much or how little “help” they want from the bike’s dynamic safety systems under different riding conditions. Working together, the ABS and traction control systems work to maximize traction on the front and rear wheels respectively. Being able to dial in that help and specify modes based on riding conditions should help keep one’s riding adventures from getting too adventurous

The two standard rider modes on the S1000XR include “Rain” and “Road” which dial in presets in the ASC traction control system. If fitted with the optional Pro riding modes, “Dynamic” and “Dynamic Pro” modes become available, dialing back the system’s interference in spirited riding. The Pro riding modes also unlock DTC, which is basically a more nuanced traction control system; and ABS Pro, which allows for safer braking while cornering. ABS Pro is particularly interesting because as a system, it’s designed to more or less keep you from paying the price for bad decisions while riding. On most bikes, if you grab a sharp handful of front brake while leaned over, that’s a recipe for a low-side crash. ABS Pro aims to make that harder to do.

I think it’s interesting to note, however, that unlike the Multistrada, BMW is not offering an “enduro” mode on the S1000XR. I applaud this, as I think it speaks to the S1000XR’s actual usage. I also think it’s fitting that BMW, the leader in actual Adventuring Touring, doesn’t bother pretending this is a bike fit for off-road use just to chase sales. 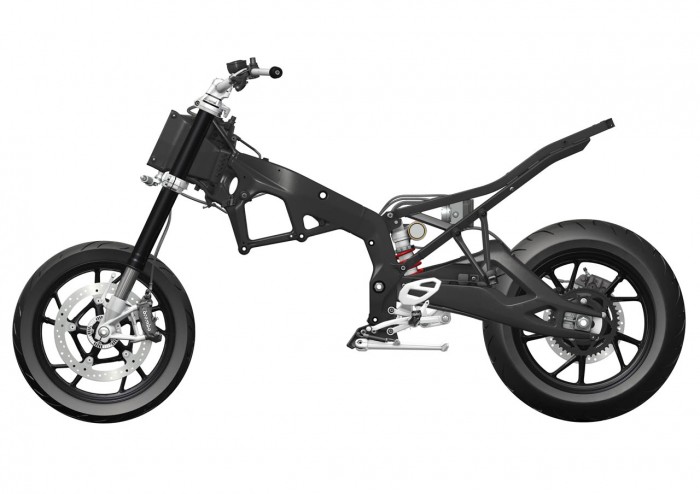 The S1000XR Chassis and Suspension

Like its key rival, the Ducati Multistrada, the BMW S1000XR includes electronic, dynamically adjustable suspension as an optional extra. This system, dubbed Dynamic ESA (Electronic Suspension Adjustment), lets the rider dial in the suspension by virtue of the dash, rather than pulling out any tools. Not only does this allow riders to set the bike up to their particular preference, but allows for adjustments on-the-fly when riding conditions change, or when taking on a passenger. Superbike style upside-down front forks keep the front wheel planted, while the S1000XR’s double-sided rear swing arm is held down by a mono-shock, just like its siblings.

Those electronically adjustable suspension components are mated to an aluminum-alloy perimeter frame chassis, the core of which is shared with the other S-series motorcycles. The engine itself is also still a load-bering member. However for the S1000XR, the overall geometry of the bike is specifically tweaked for the XR’s intention as an “Adventure Sport Bike.” We would expect more rake and a longer wheelbase overall, making the S1000XR more poised on the road and less eager to turn in. 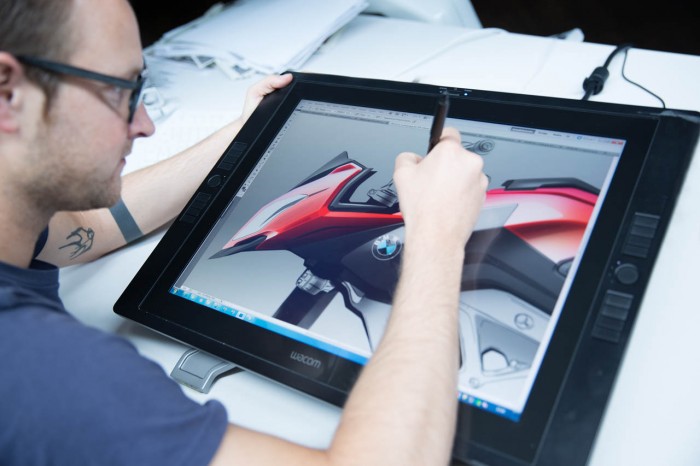 There’s no mistaking the S1000XR for anything but a BMW. Aggressive, angular lines further ground the XR in the S-series of high performance machines. Like the recently debuted R1200RS, the S1000XR offers less aggressive wind protection than BMW’s flagship tourer, the R1200RT, yet still appears to offer basic wind shelter for those long days on the open road. The bike’s “adventure” stance shouldn’t be taken as much more than a nod to its intended segment. This is not an R1200GS. This is a superbike touring machine. That said, the stance offers a few useful affordances, such as a commanding view of the road and greater leg and body wind protection. Ground clearance has its advantages, even if you aren’t trying to cross Morocco as the crow flies. The trade off is seat height, which is often a challenge on any adventure-oriented bike, the GS included.

BMW’s list of highlights for the new BMW S1000XR:

Video: A Look at the BMW C Evolution