With six hours remaining in the 2015 Rolex 24 at Daytona the sun has come up and put more than 13 hours of darkness behind us. BMW Team RLL currently stands third and fifth in the GLTM class.

Augusto Farfus drove the No. 25 BMW Z4 GTLM for three stints before pitting from fourth place to hand off to Auberlen. The Californian drove another double stint. Next Spengler was back in the car for his second time. The brakes were changed during his second stint. Werner drove through the wee hours of the morning, racing the white Z4 to the front of the field for a significant time. Just as the 18th hour passed Spengler, now in the car and in the lead, had an off entering the Bus Stop and tore off the rear body work. He pitted for repairs, losing one position.

Jens Klingmann triple-stinted the No. 24 BMW Z4 GTLM moving back onto the lead lap. He pitted under caution and John Edwards was the next behind the wheel. Unfortunately, just past the nine hour mark bad luck struck the black Z4 for a second time as Edwards was hit hard from behind and pushed into a car in front on the restart. The damage to both ends of the car was repaired in the garage, but 29 laps were lost. Luhr and Rahal raced through the early morning hours, regaining three of the laps lost.

With six hours complete in the 2015 Rolex 24 at Daytona darkness has taken a firm hold over the Daytona International Speedway and BMW Team RLL stands sixth and eighth in the GLTM class.

Bill Auberlen, Bruno Spengler and Dirk Werner have each completed two stints in the No. 25 BMW Z4 GTLM. Augusto Farfus is behind the wheel, on the lead lap.

John Edwards, Lucas Luhr and Graham Rahal have done the same in the No. 24 BMW Z4 GTLM. Jens Klingmann drives the car now. On lap 134 the car suffered a right rear damper problem and lost three laps during the replacement. 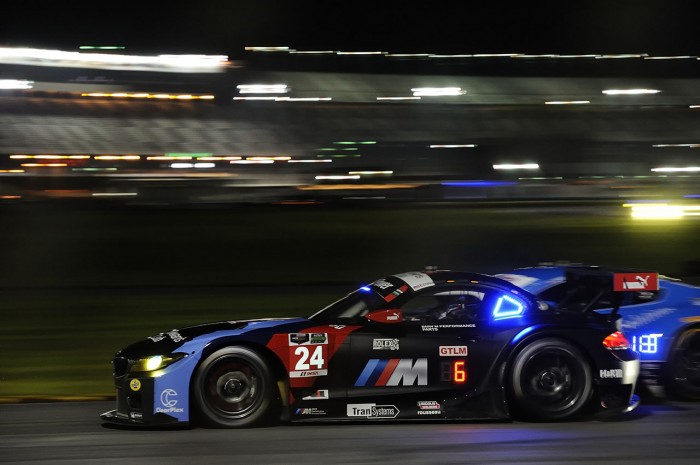 Bill Auberlen, driver No. 25 BMW Z4 GTLM – “The first stint was fine and we were exactly where we wanted to be. The second stint was fine right up until the end.”

Bruno Spengler, driver No. 25 BMW Z4 GTLM – “I love it. My first experience in a 24 hour race. It was a good stint because I started in the sun light, then the sun went down and I went into the night. It was a lot of fun out there, but there is a lot of traffic, of course, so it was not so easy. I think we have a little damage to the rear of the car, but hopefully it will hold until the end of the race. Otherwise it went smoothly, I had not contact in my stint, I tried to be as consistent as I could and I think it worked. Now I am going to cheer for my teammates until I drive again.”

Dirk Werner, driver No. 25 BMW Z4 GTLM – “I had a nice time out on the track and a good experience of how crazy it is sometimes out there, fighting with the LMP cars and just trying to stay out there and not get into trouble, which is difficult enough in the night. In the end we were in the lead, and the car is running well with good lap times. Right now I think we can be happy and just continue doing what we have done so far.”

John Edwards, driver No. 24 BMW Z4 GTLM – “It seemed like a very eventful start to the race. We have a 24 hour race and it felt like I was the only one in an endurance race and everyone else was in a sprint race. I was able to avoid contact and stay in the lead pack and that is all we are trying to do at this point in the race.” 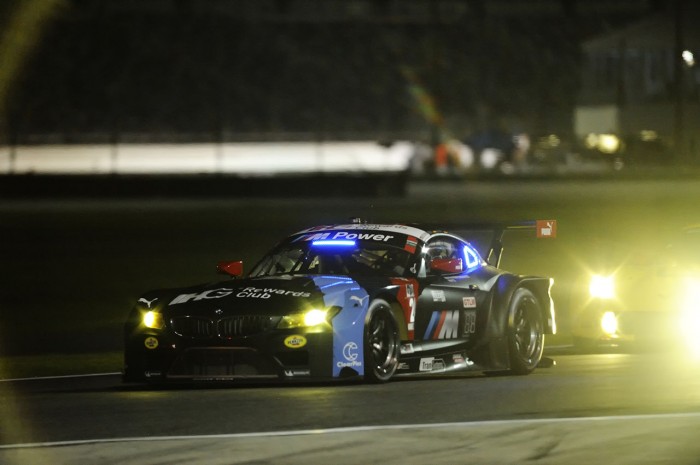 Lucas Luhr, driver No. 24 BMW Z4 GTLM – “It was very entertaining. I always knew that GTLM racing was very tough, but this is just awesome and I love it. It was very, very good. Our car is fine, so at the moment I and happy with it. We can stay with the others. It is just mega and I am already looking forward to my next stint.”

Graham Rahal, driver No. 24 BMW Z4 GTLM – “We had a really good run there. The car was fast, but unfortunately the right rear had a damper bolt come out, so we had to come in and lose three laps. I think we are almost back to the lead lap now, and we got two back during my stint. I think Jens will like the car and I hope he can go forward.”