“In spite of ferocious cold and mountains of snow in so much of the country in February, our customers proved they could overcome and made it possible for BMW to post a new record for February sales,” said Ludwig Willisch, President and CEO, BMW of North America. “Improved availability of the always popular X5 and the strong and growing interest in our 2 and 4 Series cars are good indicators of what’s ahead.”

To see and hear more of Ludwig Willisch’s perspective on the February sales, click here. 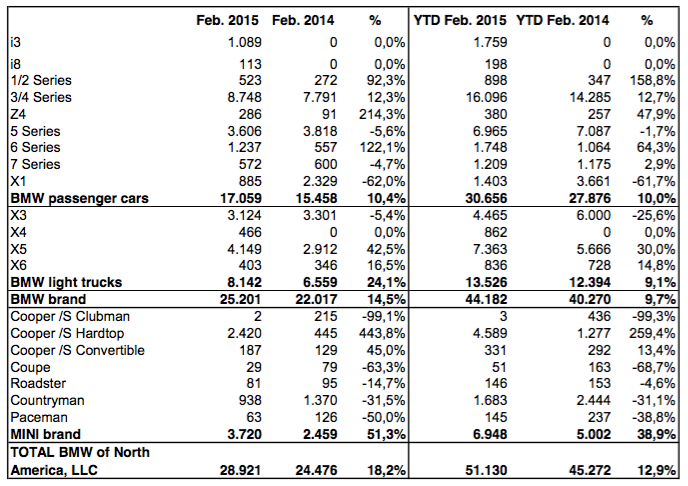 The BMW Group in the U.S. (BMW and MINI combined) reported February sales of 28,921 vehicles, an increase of 18.2 percent from the 24,476 vehicles sold in the same month a year ago.

In February, sales of BMW used vehicles (including certified pre-owned) increased slightly, by 1.3 percent, to 15,157 vehicles compared to the 14,956 vehicles sold in February, 2014.

In February, MINI used automobiles (including MINI NEXT certified pre-owned) reported sales of 1,827 automobiles, a decrease of 2.6 percent from the 1,875 sold in February, 2014.

BMW Worldwide has Best Month Ever

BMW Cuts Workforce As It Increases US Factory Capacity