Official Release: BMW Sports Trophy Team Marc VDS finished fifth and sixth in the final race ahead of the Nürburgring 24 Hours (DE). The second round of the VLN Endurance Championship was dominated by the typically unsettled Eifel weather. The rain started to fall in qualifying, making the battle for grid positions something of a lottery. BMW Sports Trophy Team Marc VDS was unlucky with the timing of its fastest laps and started the four-hour race from down in 26th place with the number 26 BMW Z4 GT3. The number 25 car was hampered by a puncture, and was consequently forced to start the race from the back of the initial 63-car field. 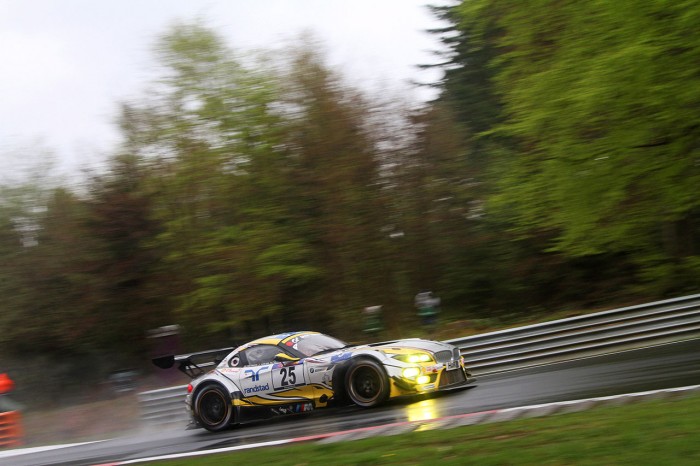 The race commenced on a dry track, with Lucas Luhr (DE), Maxime Martin (BE), Markus Palttala (FI) and Richard Westbrook (GB) in the number 25 car, and Dirk Adorf (DE), Augusto Farfus (BR) and Jörg Müller (DE) in the number 26 car wasting no time in working their way up the field. A heavy shower shortly before the halfway point mixed the field up again, but BMW Sports Trophy Team Marc VDS defied the extremely difficult conditions to finish strongly. The number 25 car came home fifth, while car number 26 ended the race in sixth place.

The Walkenhorst Motorsport team also fielded two BMW Z4 GT3s. John Edwards (US) shared the driving duties in the number 36 car with Michela Cerruti (IT) and Felipe Fernándes Laser (DE). The trio were running in a strong sixth place until just a few laps from the end, but were then forced to retire from the race with a technical problem. The number 35 car failed to finish after being involved in a crash through no fault of its own.
Victory in the first race of the BMW M235i Racing Cup class went to Scheid Motorsport’s “Eifelblitz” car. Drivers Uwe Ebertz (DE), Michael Schrey (DE) and Jörg Weidinger (DE) in the number 666 car came home ahead of the Adrenalin Motorsport and MPB Racing teams in second and third respectively. The field comprised 21 BMW M235i Racings. In total, BMW drivers claimed six class wins at the 40th DMV 4-Hour Race.

Quotes from the BMW drivers after the race:

“I was really unlucky in qualifying. Shortly after the entrance to the Nordschleife I suffered a puncture, and then had to haul the car the full 20 kilometres back to the pit lane. However, the fightback in the race was great fun. The result wasn’t too important today. With one eye on the 24-hour race, we wanted to test some strategic options. The most important thing today was to gain experience for what is one of the highlights of the endurance season. I think we have a strong package.”

“The BMW Z4 GT3 felt good today. The main thing was that we finished the race without any problems and gained valuable experience in the rain. I am optimistic about the 24-hour race. Before then, however, I am looking forward to the opening round of the DTM season in Hockenheim next weekend.”

“That was an ideal first race for us. We are up against some very strong opposition in the BMW M235i Racing Cup class this year. I think there are at least five teams capable of winning races this season. As such, you cannot expect to just turn up and win. That makes this opening win all the more important. We did a flawless job as a team – and had that little bit of luck you need in this typical Eifel weather.”