Across all the xFile family of sites, our coverage of brand and segment news is grounded squarely in our enthusiasm for these particular brands. Often that enthusiasm boils over into actual purchases, like it did for me recently when I procured a new-to-me 2013 BMW G650 GS motorcycle. While two years old and with 7,500 on the clock, my GS is still new enough to be part of the current generation of the G650. It’s even still under warranty.

This GS is actually the second BMW in my eclectic fleet of two-wheelers. My other BMW motorcycle is a 1980 R100 RS that’s currently undergoing a soft resto-mod in the Salzmoto shop. (More on that bike in future posts.) I procured my G650 GS from Motoworks Chicago who, in addition to being a Triumph, Ducati and Vespa dealership, actually began life as a BMW service center. They remain, in my opinion, the best place to take a BMW motorcycle for mechanical work in the entire Chicago area.

The brief for adding this particular bike to my lineup had to do with my wife, funny enough. She wanted to get into off-road riding, which is something neither of us had really done before. We picked up a wonderful little 2008 Honda CRF230L for her, and now I needed something on which I could chase her down those gravel roads. Put another way, I had a directive from the Mrs: “Get yourself an off-road bike so we can go riding.” 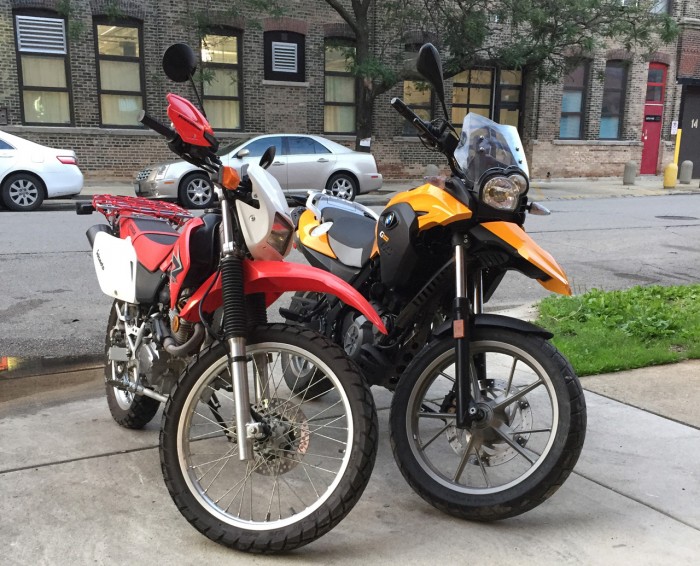 Early on I’d considered the usual suspects of inexpensive, big-bore, street legal dirt bikes. In particular, the Honda XR650, the Suzuki DR650, the Suzuki DRZ400, and the Kawasaki KLR. All four of these bikes are essentially based on designs from the 1970s. They’re established, and long ago all the significant bugs were worked out of them. There’s also a plethora of accessories and upgrades available. Yet for all that easy virtue, the two bikes that really drew my attention were both BMWs. 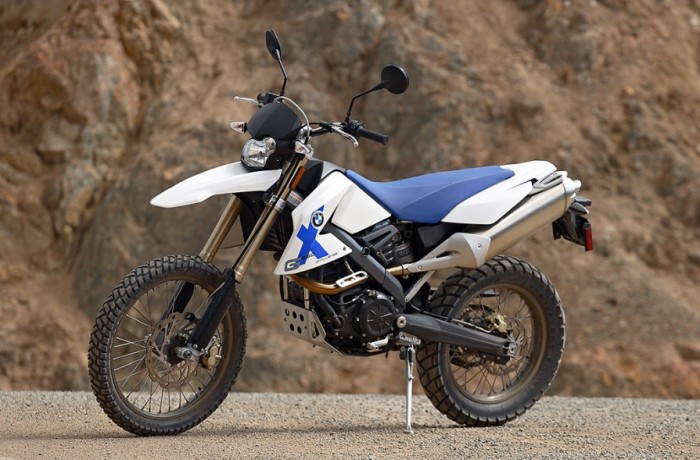 These two bikes were really just two versions of the same bike. I’m referring to the 2008-era BMW G650X X-Challenge and X-Country (pronounced “cross-challenge” and “cross-country” respectively). Featuring aluminum frames and the same Rotax-derived 650cc single as the G650GS of the same era, both of these bikes found cold welcome in the USA, mostly on price. This despite available ABS, nearly a foot of suspension travel and designs grounded in the present rather than 40 years in the past. One could argue they were simply ahead of their time. 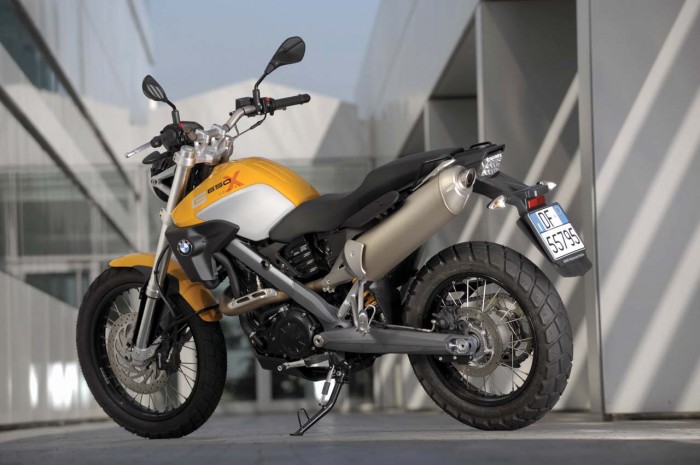 Best of all, the X-series BMW 650s were feather-light, at less than 350 lbs wet. The trick for me was finding one in good shape in the upper midwest. The nearest bikes I could find were in Ohio, and there was no appeal in trying to shop a used bike I’d never ridden over long distances. So I waited, checking in with Craigslist every few days for something to pop up in the tri-state area.

While I waited, I got lucky. I happened to be at Motoworks Chicago right after a cherry 2013 BMW G650 GS had come in on trade. I threw a leg over the bike, felt out the ergonomics and then it hit me. This latest G650 GS is really just a descendant of the X-Country of yesteryear. Sure, it’s not as light as the X-Country or X-Challenge, but it’s basically the same weight as the single-cylinder G650 GS machines that came before those bikes. With just 7,500 miles on it and a year of factory warranty left, it was too good to pass up. I put down a deposit on the bike 15 minutes after first laying eyes on it. After an extended test ride, I pulled the trigger.

Geography aside, the G650 GS was appealing from a few different angles. I was looking for something that could handle light off-road riding. That is, something that could easily tackle unpaved roads, simple trails and some basic overland riding. The reason I didn’t go full-on street legal dirt bike (such as my Japanese options) was that in adding some off-road capability to my garage, I was simultaneously getting out of my trusty road touring bike: a 2010 Triumph Tiger 1050 ABS. While the G650 GS wouldn’t be expected to fill that sport touring role, I still wanted something that I could take on a backroads trip if the mood struck. Even this smallest GS fills that role no problem. 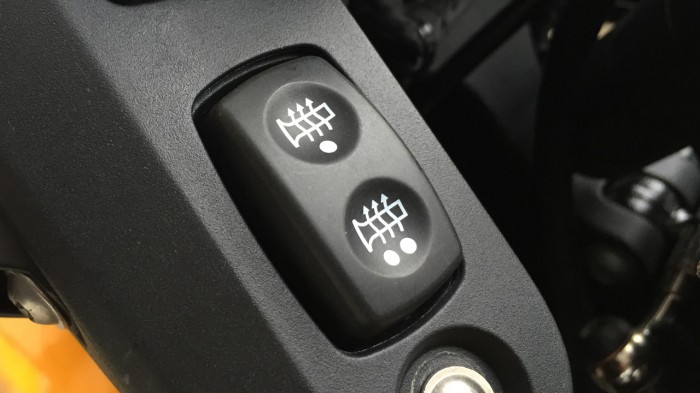 The G650 GS also had two key features that set it apart from its cheaper rivals. Factory heated grips saved me a step of installing my own, but more importantly, the G650 GS comes with ABS as standard. In this case, the ABS is also switchable, meaning that for off-road use, I can disable the ABS and slide my tires as needed. Without this option, an ABS-equipped motorcycle will actually accelerate down hill on loose surfaces. As you can imagine, this creates issues.

As with the G650X bikes that had first grabbed my eye, I appreciated the decidedly modern looks of the G650 GS. Its a fun mix of flowing lines and mildly aggressive angles. Best of all, it’s just obviously not a “dirt bike” in the traditional sense. There’s nothing wrong with that, but I appreciate something more grounded in a modern style. 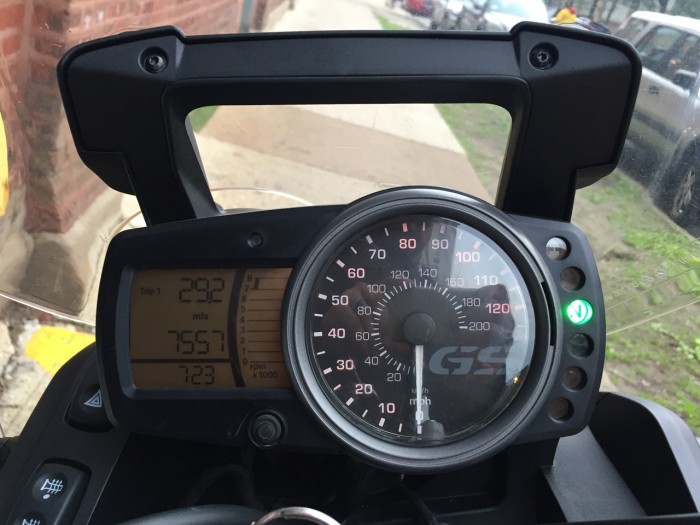 Most of all, the G650 GS appealed to me because of its versatility. Are there better dirt bikes? Of course. Are there better road bikes? Absolutely. Yet it’s the mix of these two capabilities, in a compact, simple package that I ultimately found so appealing. With so much love of “scramblers” in the motorcycle zeitgeist right now (even from BMW itself), I can’t help but look at a bike like the G650 GS and think that this bike is, in reality, what all these faux-scramblers aspire to be in affectation. It’s a bike that you can truly ride both on and off road without fear of over-riding the bike’s capabilities.

The final selling point was that I can buy bolt-on luggage racks for the G650 GS that fit the SW-Motech pannier system I already own. This is something I couldn’t do for the X-Challenge or X-Country. This will literally save me thousands of dollars.

So while the G650 GS might not seem glamorous on first blush, what I found was that when I looked deep, given what I really wanted to do with my next motorcycle, it was the obvious choice. It also didn’t hurt to have the G650 GS enthusiastically endorsed by a handful of Baja 1000 rally veteran friends of mine who’d personally flogged several generations of the bike all over Mexico. How do you argue with that? 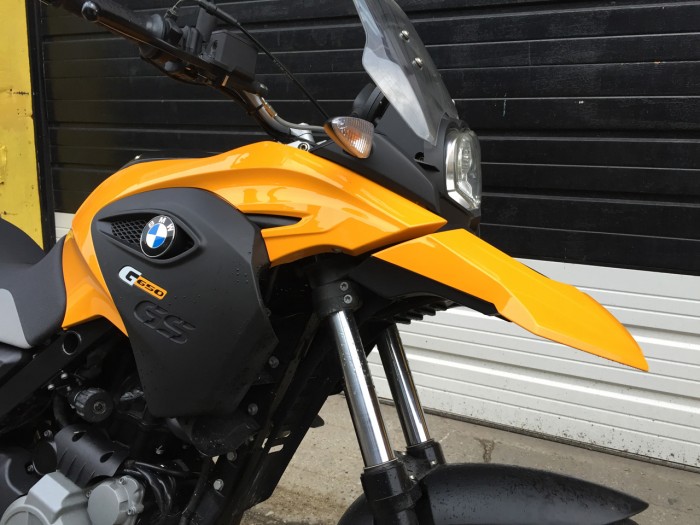 Now for me personally, my G650 GS is fulfilling some specific criteria that’s unique to me. It has a fairly narrow focus in that I have several other bikes in my garage that I use for other things. I’m also currently enjoying my eighth year of riding two-wheelers.

Thing is, it would be easy to look at the G650 GS as BMW’s “entry level” bike. While I would say this machine has a range that extends well beyond beginner skill levels, it does still include them. For BMW enthusiasts looking at the G650 GS as what might possibly be either their first motorcycle or their first foray into off-road riding, I’m happy to report that the G650 GS may indeed be the bike you’re looking for. I’ll go more in depth on this subject in later posts.

As I share my experience with the G650 GS over the coming months and years, I’m going to keep that perspective in mind and attempt to frame that experience in those terms. After all, even though this isn’t my first motorcycle overall, it’s still my first off-road oriented bike. It’s my first “adventure” bike and my first BMW GS. I know that puts me in good company. I’ll share that adventure perspective directly. Yet I want to also put myself squarely in those beginner boots and share things that hopefully aspiring riders starting at mile zero can find useful as well.

The new BMW HP4 makes its race debut in Macau