BMW is working on bringing CarPlay to market. That’s the latest from our sources who are now telling us it’s not a matter of if but when. The current time-table for BMW as a whole is that it will begin introduction of CarPlay in the 2016/2017 timeframe and roll out the feature model by model.

It’s not a surprise that BMW is moving down this path. Consumers want connected cars that work as simply and effectively as their smart phones and tablets (you only need to read BF comments for evidence). Yet automakers have been stifled by long product cycles and engineering processes that aren’t what you’d consider agile.

Enter CarPlay (and Android Auto) which brings automotive grade smartphone experience to the car. The problem is support. In that until just recently almost no automaker supports the platform. But that’s set to change dramatically over the next 18 months and MINI and BMW will be part of that (it remains to be seen what their plans are with Android Auto).

Why are MINI and BMW late to the party? Given our conversations with MINI and BMW engineers over the past few years it’s clear to us that they have taken a wait and see approach with the technology integration. But it’s not due to BMW being caught off-guard. While it’s true that Apple has often been very late to notify its partners about car related technology (Siri integration being a good example), our sources have told us us that Apple worked directly with automotive partners ahead of the CarPlay debut in Geneva earlier this spring. We also believe that BMW (and MINI given that they use the same iDrive system) has been testing its own integration of the system. However that’s not the only thing that BMW is testing deep within the labs of it’s Munich headquarters. 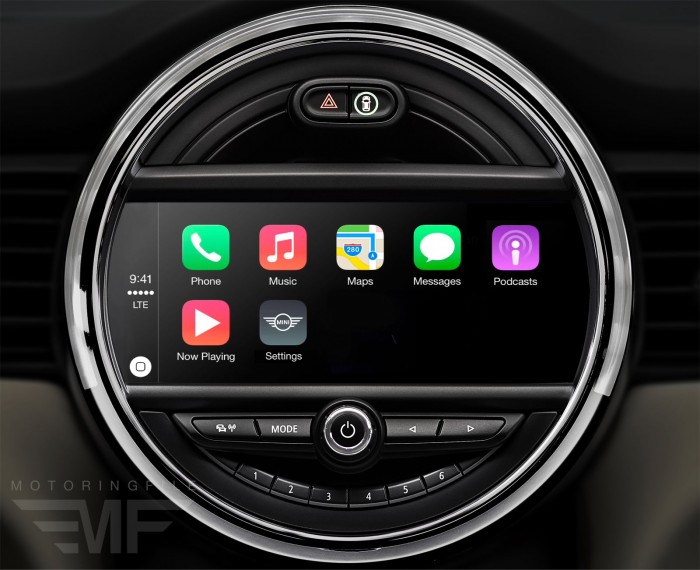 BMW has long believed that a controller based input (iDrive) is a much safer method than touch screen. Independent testing (and BMW’s own) has proved this out with touch screens requiring more of the brain’s processing power to be interfaced with – not something that’s particularly good while driving. Because of this research, BMW has maintained its iDrive approach since its introduction since 2001. But maintain doesn’t mean remain stagnant. Along the way BMW hasn’t been afraid to dramatically refine the system with the most recent updates being seen in new BMWs and the F56 MINI just this year. The most recent addition (as seen in the new F56 MINI) includes a multi-touch controller that allows for pinch and zoom along with hand-writing recognition.

But BMW knows that’s not enough. Enter the touch-screen iDrive. BMW’s introducing this new version of iDrive in the 2016 7 Series and in our time with the car earlier this summer it’s a welcome addition to the platform. Our sources are telling us that BMW will be moving to a dual controller/touch-screen interface within the next few years for all models. We expect CarPlay’s rollout to likely coincide with this.

CarPlay is also getting much more powerful with every iOS update. It’s now wireless which helps make everything much more seamless in terms of daily use. Another addition is increased compatibility with higher aspect ratios and higher DPI screens that are quickly becoming standard on cars such as the MINI.

However the most important update to CarPlay is that Apple is opening the platform up to automakers. Up until now, CarPlay was just a feature within the larger infotainment environment of the car. For instance, if you wanted to access any car-related controls such as the temperature, you had to get out of CarPlay and then come back in. Not a pleasant user experience to say the least. Now, Apple is allowing automakers to make an app within CarPlay that can control any aspect of the car. This is likely what BMW and MINI have been waiting for before diving headfirst into the technology.

BMW Begins It\’s March Towards the iSetta With Documentary Series