September year-on-year sales for BMW USA grew 4%. While it’s yet another month of steady growth, these numbers need to be taken in context. There are two items to keep in mind: First, the labor day weekend is included in September sales this year, but wasn’t in 2014; and second, US light vehicle September year-on-year sales were up 15.7%. Compared to the two German rivals, 4% was a pretty poor showing: Damlier AG was up 6.1%, and Audi is continuing it’s sales explosion, up 16.2%. Audi has had monthly year-on-year sales growth for 59 months straight! Who knows if this will continue, as Audi is very exposed to the VW diesel fraud (The A3 uses the 2.0 TDI that has the bad code in the ECU, and Audi is under the VW umbrella). Although Lexus had a really good month (up 15.8%), it undersold BMWs by just over 1,300 units. With just three months left in the year, if BMW keeps doing what it’s been doing, it looks like Lexus won’t overtake BMW. Whatever happens, it’s going to be close.

But digging deeper into the BMW numbers, there are some interesting tidbits. First off, the i3 seems to be doing better. Initial sales were pretty slow here in the US, but this month 1,710 i3s rolled off of dealer lots. This lines up with my informal “rich persons car index” where I look at what people are driving around Portola Valley and Woodside, land of Larry Ellison, VCs and other people who can drive whatever they want. Initially the i3 was noticeable by their absence, but now, they are showing up in the school drop-off lines and at the local grocery stores. The 5 series had a very, very good month with 4,059 units delivered, but year to date, 2014 was a better year by well over 5,000 units. 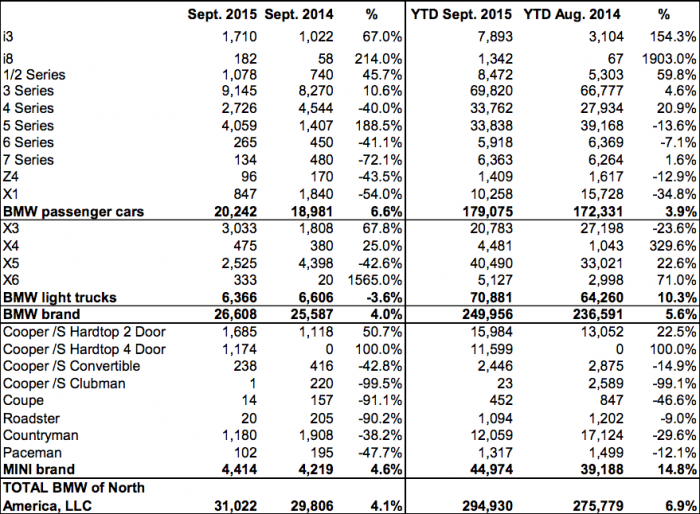 “There’s no doubt about the strength of the U.S. economy and that people continue to buy new cars as evidenced by the BMW record sales result in September,” said Ludwig Willisch, President and CEO, BMW of North America. “Going into the all-important fourth quarter, the all-new BMW 7 Series and X1 go on sale this month and our expanded production capacity here in the U.S. means greater availability of the very popular BMW Sports Activity Vehicles, especially the X3 and the X5.”

BMW Group Sales
In total, the BMW Group in the U.S. (BMW and MINI combined) reported September sales of 31,022 vehicles, an increase of 4.1 percent from the 29,806 vehicles sold in the same month a year ago.  Year-to-date, BMW Group sales are 294,930 vehicles, a 6.9 percent increase from the same period last year.

Video Preview of the New 2018 2 Series Coupe and Convertible

The BMW Group Classic at the Goodwood Revival 2011