Each month, we wait for the official release detailing the previous months sales. As soon as it’s released, we read it over and report the numbers. For the last couple of months, we’ve added context from the industry as a whole. This way, months where there are slight gains might not be so rosy (like last month, when there were slight year-on-year gains for the month, just not as much as the industry average), and other times, sometimes slight losses may be much better if the overall industry performs worse. This month, it’s hard to find good news for the BMW Group US sales. Overall, BMW’s October year-on-year sales were down 1,163 units to 29,439 deliveries, or a decrease of 3.8%. To make maters worse, Mercedes Benz and Audi were both up, 3.3% and 16.8% respectively. We personally find Audi’s numbers surprising, as we were expecting the hit from the VW fraud to start to take its toll. The only good news for BMW is that while Lexus posted a large gain of 13.2%, BMW’s lead over Lexus in total units sold increased by about 3,000 units to just north of 5,500. The only really strong news stressed in that the official press release is that there was strong growth in the Light Truck segment (These are the X3 through X6. The X1 is considered a passenger car!) The LT segment grew an astonishing 56.7% to a combined 8,372 units.

“Trends in the luxury vehicle market are becoming more evident with the October sales another indicator of how important Sports Activity Vehicles are becoming to our market segment,” said Ludwig Willisch, President and CEO, BMW of North America.  “With the all-new BMW X1 just now going on sale and availability of the always popular X3 and X5 improving, we expect good growth in the final two months of the year.” 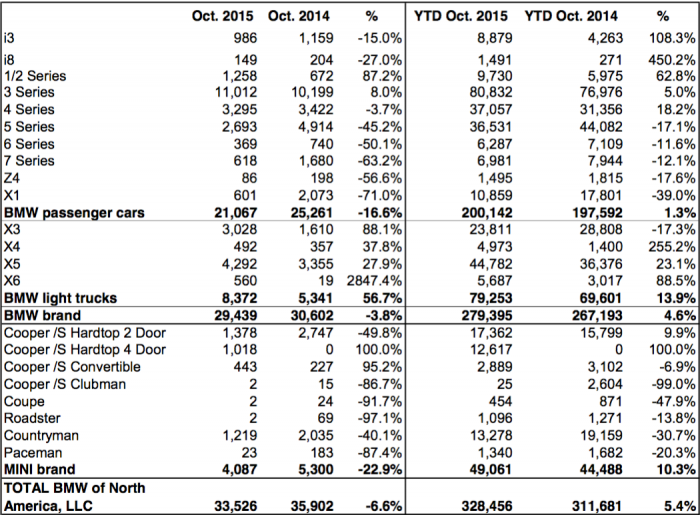 by Michael
BMWi i3 Official News

World Premier: 2013 BMW X1 Coming To US With Six Cylinder