The BMW M2 isn’t even at dealers yet and we’re seeing what could be the next evolution of the car. Like the 1M before it BMW has chosen the M2 as its MotoGP pace car. The car itself has been extensively modified a la the M4 GTS and the 1M pace car before it. So much so that it’s hard to not see a potential pint sized GTS in this pace car. Will the M2 MotoGP Paccar become something more? Something eventually offered to the public? Only time will tell. In the meantime check out the full release, specs and modifications list below.

BMW M goes into the 2016 MotoGP season with a Safety Car based on the new BMW M2 Coupé. The BMW M2 MotoGP Safety Car is the new highlight of the MotoGP eet and immediately takes a leading role in the quest to get the eld of top-class riders round the racetrack quickly and safely in the coming rounds of the World Championship.

The BMW M2 Coupé (combined fuel consumption with M DTC: 7.9 l/100 km; combined CO2 emissions: 185 g/km), which was unveiled in Detroit in January 2016, provided the ideal basis for a MotoGP Safety Car, particularly as its distinct racing genes are part of the product DNA. The new inline six-cylinder engine with innovative M TwinPower Turbo technology and three-litre capacity guarantees extremely sporty performance. With a maximum output of 272 kW/370 hp and a maximum torque of 7,000 min-1, the extremely rev-happy power train really makes its mark out on the track. The intelligent, lightweight concept, low point of gravity and small, unsprung weight are further trump cards, which help ensure the maximum agility and dynamics of the high-performance coupé. 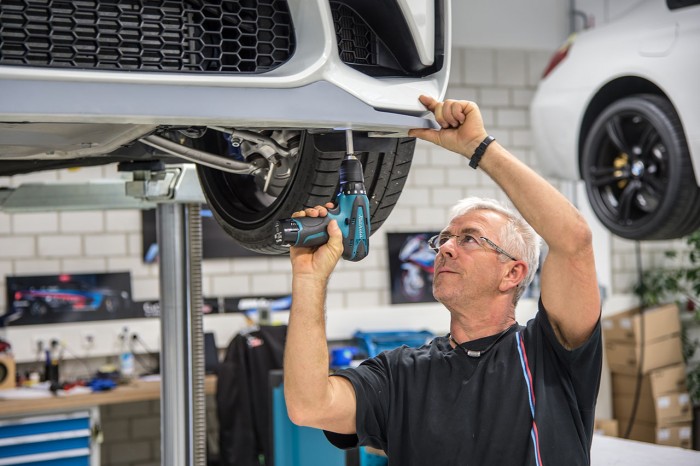 In the BMW M factory in Garching, the production car was modified, optimised and prepared by hand for its new role in MotoGP. As well as exclusive tailor-made solutions and mandatory safety features, the engineers at BMW M Division also equipped the Safety Car with extensive BMW M Performance Parts. This not only gives the car an eye-catching appearance, but also plays a practical role in the areas of aerodynamics, cooling and lightweight design. Many of the M Performance Parts, including the lowered thread chassis and exhaust with ap system, are also available as retro t components for the BMW M2 Coupé.

Back in early October 2015, a team of BMW M experts began preparing to assemble the BMW M2 MotoGP Safety Car. Two weeks later, a basic production model rolled into the halls of the M factory. That signalled the start of the task of manually converting the BMW M2 Coupé into an exclusive safety car. The modi cations took a good ten weeks to complete. 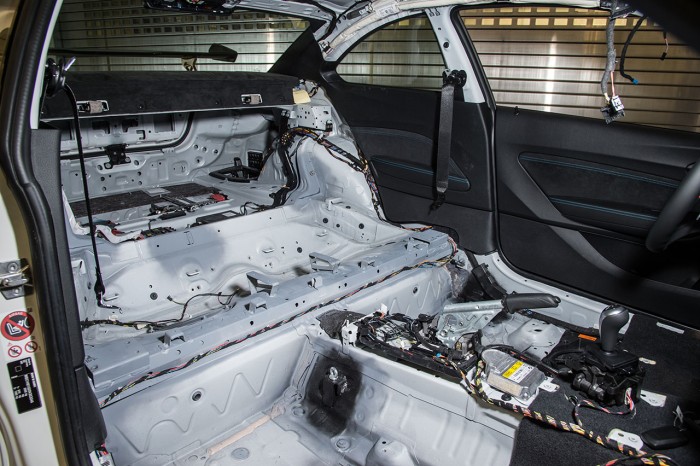 The prototype workshop, which is responsible for innovative detailed solutions and perfect customisations within the BMW M factory, played a central role in the project. It is here that a team of highly-quali ed specialists implemented the most demanding speci cations by hand. As well as the installation and addition of BMW M Performance Parts, the prototype workshop’s key roles included preparing tailor-made components, capable of coping 100 per cent with the high-performance demands faced on the racetrack. It is ultimately this combination of innovative technology and skilled manual perfection that make the BMW M2 MotoGP Safety Car truly one of a kind.

One of the rst tasks facing the technicians was to remove the rear sight on the basic model and free up the undercarriage. The supports for the roll cage, anchors for the six-point harness and bracket for the re extinguisher were then welded into place. The cage itself was manufactured based on the BMW M4 GTS and adapted to the spatial requirements of the M2 Coupé. 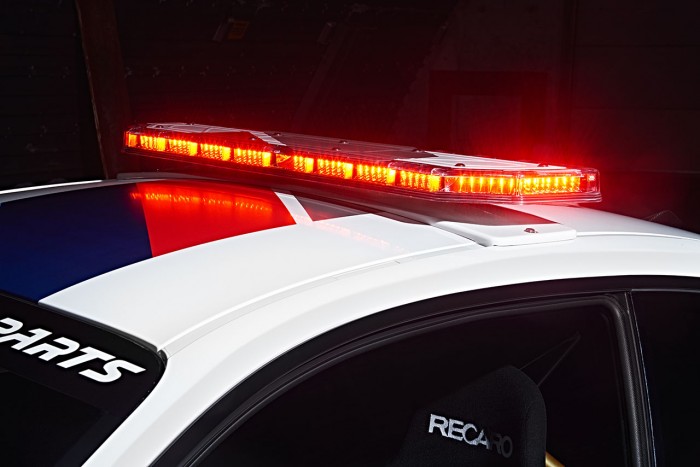 The flat light bar on the roof features the very latest LED technology and control electronics. The prototype workshop manufactured a bracket accordingly, the design of which boasted both impressive aerodynamics and an athletic look. The lightweight, sandwich-style bracket consists of an under laminate, a perforated sheet in the centre and a carbon fiber covering in the same colour as the car, which fits in superbly with the overall look. The internal metal panel not only absorbs tensile forces, but also helps secure the light bar, which can easily be removed for transport purposes.

The light bar is controlled via a specially developed control panel in the cockpit. Here, the crew can select from various lighting programs and frequencies. The electrics experts have also installed additional LED lgihts on the front and rear of the car. The respective control units stem from the SES specialists and were adapted for use in MotoGP. Blue LEDs are used on the front grille, while the Corona rings surrounding the headlights. On the rear of the car, red LEDs replace the reversing lights found on the production car. All signalling systems can be controlled separately and ensure maximum attention out on the racetrack. 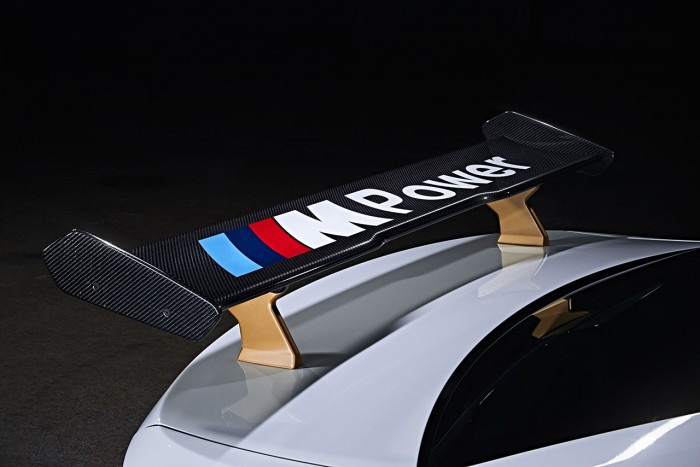 As the project continued, it was the uid dynamics experts who were put to the test. Although the light bar and roof brackets are designed to be very flat, they still affect the outstanding aerodynamics on the BMW M2 Coupé, particularly at racetrack speed. For the technicians at the prototype workshop, this meant having to come up with suitable countermeasures to compensate for the distruption to the aerodynamics. Inspired by the BMW M4 GTS, they developed an easily adjustable rear wing made of carbon fiber reinforced plastic for the BMW M2 MotoGP Safety Car. This improved the airflow, which had been disrupted by the light bar on the roof, thus reducing the amount of lift on the rear axle.

As the entire chassis functions as one aerodynamic unit, the interaction with the front of the car also had to be optimised. The challenge here was to design a suitable front and to adapt it to the existing front skirt. The additions to the front of the car from the M Performance Parts range were to be retained. However, the nal version gives little indication of the effort that went into it, as the prototype, consisting of an adapter and splitter, was integrated perfectly in the front skirt. Here too, the BMW M specialists opted for a lightweight layer construction with glass fiber laminate and carbon fiber inlays. As a result, the front flap, rear wing and diffusor work perfectly together and guarantee the required amount of downforce and traction. 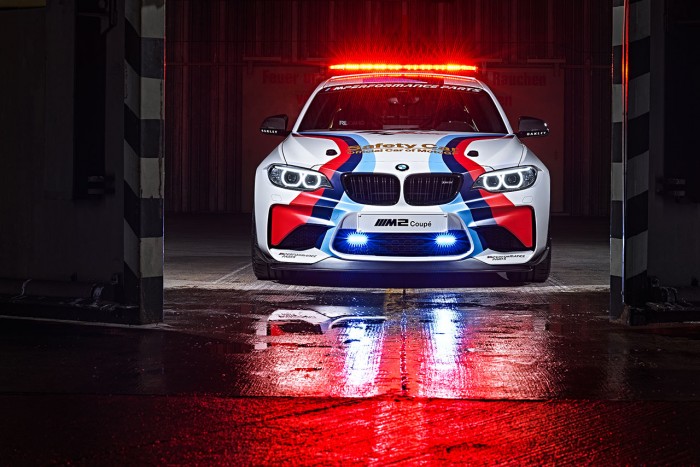 Although the M Performance coilover suspension and Michelin Cup tyres are wonderfully in harmony with the standard M compound brakes on the BMW M2 Coupé, the management in the M factory opted for carbon-ceramic brakes derived from the BMW M3/M4.

The lightweight carbon-ceramic brakes are corrosion-free, extremely thermally stable, particularly hard-wearking and significantly reduce the unsprung weight. Despite the optmised performance, the Safety Car is actually easier to maintain – another advantage, given the packed MotoGP calendar. 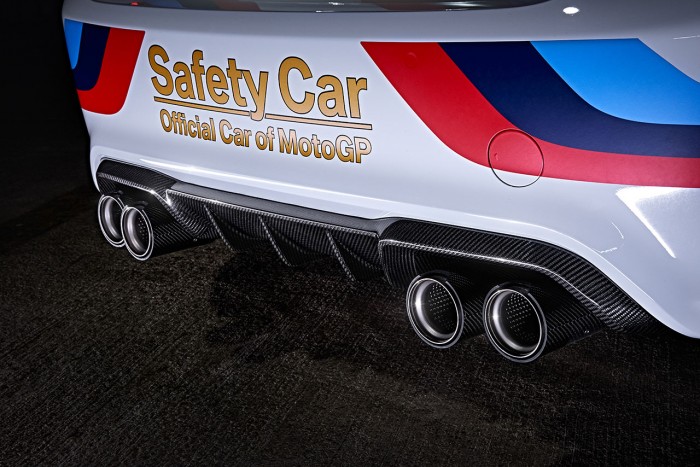 When it comes to the exhaust, the engineers have put their faith in tried-and-tested M Performance material. However, the system was stripped down completely for its outings in the motorcycle world championship. The reason: without silencer, catalytic converter and flap system, the BMW M2 MotoGP Safety Car can still be heard over the roar of the prototype motorcycles on their installation lap.

Finally, a racing hood latch was fitted in Garching. And because the BMW M2 MotoGP Safety Car will also be used in overseas races, a battery master switch and fuel pumping device help to guarantee safety when being transported by air. 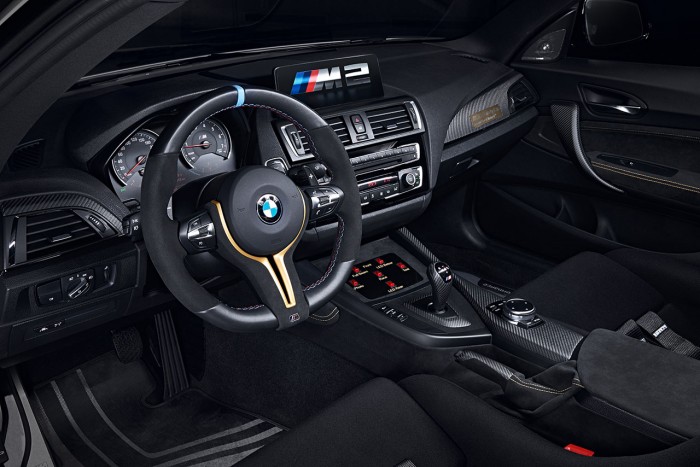 Shortly before the end of the project, the attention switched back to the upholsterers. Many trim parts in the interior were re-upholstered – a task that required considerable effort. Again, it is hard to imagine the amount of work involved, as new un nished parts were required for all the trims. These then had to be covered with leather or Alcantara, before being welded using ultrasound.

To cut a long story short: the interior and exterior of the new BMW M2 MotoGP Safety Car represent the racing know-how of BMW M Division in its purest form. Many of the prototype parts on the new highlight of the Safety Car eet feature the colour gold. As well as the basic paintwork in Alpine White and the typical BMW M livery, the car also features striking gold components, such as the roll cage, wheels, brake calipers, rear wing mounts, seat brackets, steering wheel spokes and contrast stitching. The golden badge in the decorative trim is proof that the staff in the M factory give their full attention to even the smallest of details. It features a special engraving, underscoring the fat that the new BMW M2 MotoGP Safety Car is one of a kind. 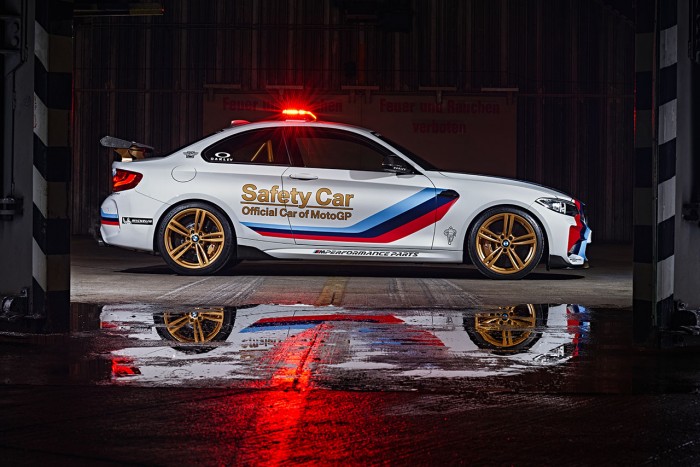 Millions of motorsport enthusiasts around the world are looking forward to the start of the 2016 MotoGP season. The best riders in the world and breath-taking race action – MotoGP is undoubtedly the pinnacle of motorcycle racing.

We are proud to have been a part of this captivating world championship for almost two decades. Since 1999 we have been a partner of MotoGP organiser Dorna Sports, and 2016 marks the 18th season of BMW M as “Official Car of MotoGP”. We are pleased with the deep trust that Dorna Sports has placed in us. BMW M Division uses technology taken from motorsport, together with innovative ideas, to ensure that race events run safely. In us, Dorna Sports knows that it has a strong partner on its side, for whom the safety of the riders on their high-performance racing prototypes has the utmost priority. 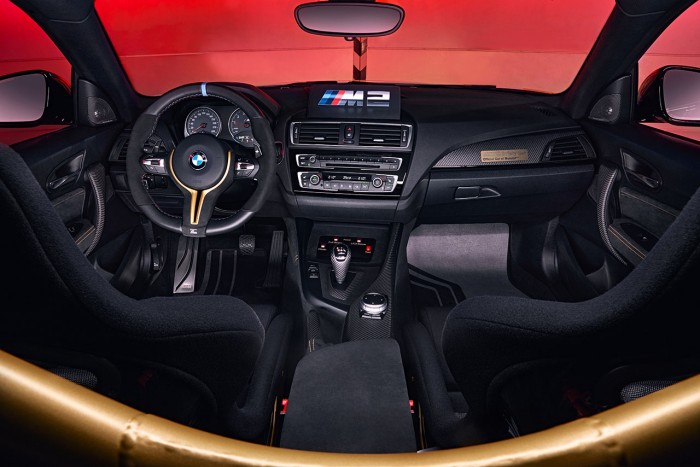 We dedicate all of our know-how to this role. The BMW M MotoGP Safety Cars are innovative high-performance models with thoroughbred racing genes. In the 2016 season, we are presenting another genuine highlight. The new BMW M2 Coupe enjoyed its much-anticipated world debut in Detroit in January. In the BMW M2 MotoGP Safety Car, we are now taking the pure power and dynamics of this high-performance automobile to the racetrack. Like its predecessors, the BMW M2 MotoGP Safety Car uses technological innovation, performance, precision and agility to help guarantee safety.

The BMW M2 follows on from the concept and success story of the BMW 1 Series M Coupe. It represents the entry-level model in the BMW M range. The new BMW M2 Coupe will make BMW M accessible to new and younger target groups. 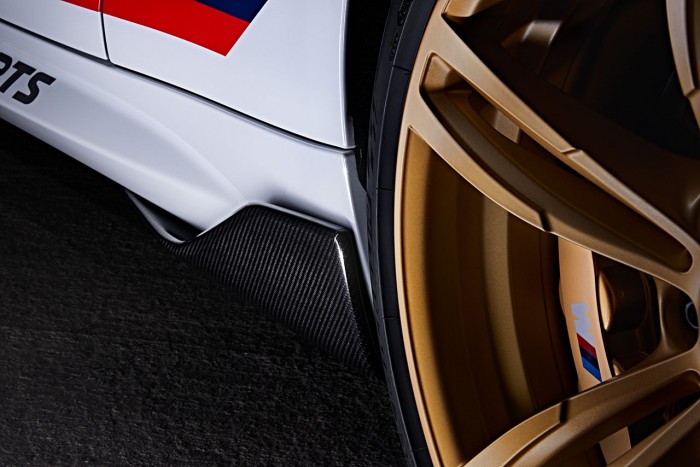 Dynamics, agility, precision – these are the stand-out attributes of our entire range of models and products, and have made M the “most powerful letter in the world”. MotoGP offers us the opportunity to present the strengths of BMW M to an international public of racing enthusiasts around the world.

We use this platform with an extensive involvement, which goes way beyond simply providing the latest BMW M models for the official fleet of MotoGP vehicles. Since 2003, the BMW M Award has been a highlight of every MotoGP season and is a coveted award among the best motorcycle racers in the world. Our many other activities include the BMW M MotoGP Experience, with which we are able to offer our visitors a unique glimpse behind the scenes of the pinnacle of motorcycle racing, and to convey the fascination of MotoGP at first hand.

In this Media Guide, we present our new BMW M2 MotoGP Safety Car in detail and offer you an overview of our Safety Car fleet, our MotoGP commitment, and the history and extensive product range of BMW M Division. Please feel free to contact us if you have any questions. I hope you have an exciting 2016 season!