BMW sedans are not selling well. There’s no other way to put it. All models but the 2-series and the 7-series saw decrease in sales, with the whole range down a whopping 18.3%. Even the prototypical BMW, the 4 series, dropped 2.2% None of this can be seen as good news back in Woodcliff Lake, NJ. But the X-series variants did much better, with a sales growth of a bit more than 12.3% All variants of the X range save the X5 had a pretty good month (this is especially true for the new X1). With gas prices so low, it’s no surprise that the i3 numbers tanked. Personally, I was a bit surprised about this, because I’m seeing many more of them around the grocery story in Portola Valley, CA.

To put this into a broader context, US light vehicle sales were up 6.8% for the month. And no, it’s not because this year is a leap year. Despite the extra calendar day, the number of sales days was the same as last year, at 24. There is another double insult in the numbers: in terms of volume, BMW NA sales were behind both Mercedes-Benz and Lexus; and compared to last year, the only brand in Matt’s Luxury Index that had a worse Feb was Infiniti! 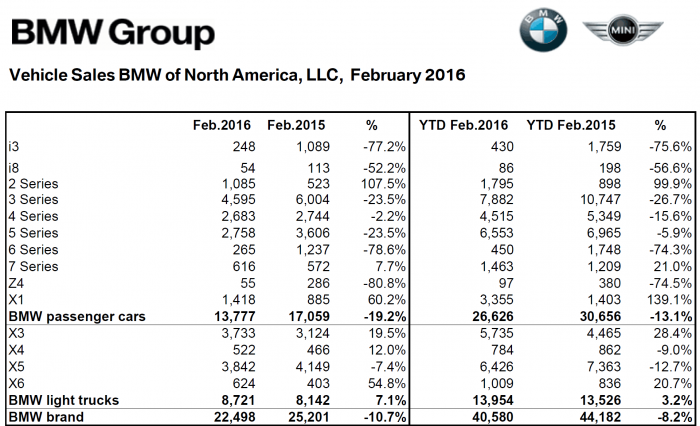 “February showed again the accelerating pace of BMW Sports Activity Vehicles is clearly more than a trend with our X models accounting for 45% of sales this past month,” said Ludwig Willisch, President and CEO, BMW of North America.  “With Spring only three weeks away and the travel season on the horizon, the growing success of the 7 Series and the 2 Series also makes us confident there’s more to come.”