March sales for BMW light vehicles were down 12.5% compared to 2015. Despite ever-increasing world-wide sales numbers, this is the fourth down month in a row for BMW NA. The biggest driver for this is the ever-increasing US buyer thirst for CUVs and SUVs. BMW NA’s product mix isn’t that favorable, with 33% of last years sales being light trucks. The increased production capacity at the Spartanburg S.C plant (50,000 more units, representing a capacity increase of over 10%) can’t come on line soon enough.

This last week has  been the NADA (North American Dealers Association) annual meeting held in Las Vegas. This article in Automotive News has some interesting quotes from Damon Shelly, the chairman of the BMW National Dealer Forum: having more crossovers “will make a lot of difference because they are not trying to force the greater share of passenger cars and will more closely meet natural demand.” And he agreed with the decision to not bring over the 2-series Active Tourer because “it isn’t really a crossover. It is front wheel drive and a very European-looking wagonish thing.” Interestingly, this description could be used of the new MINI Clubman, that is selling well, and the FWD dig doesn’t appear to hurt sales of the X1 at all, which is one of the sales stars for BMW. 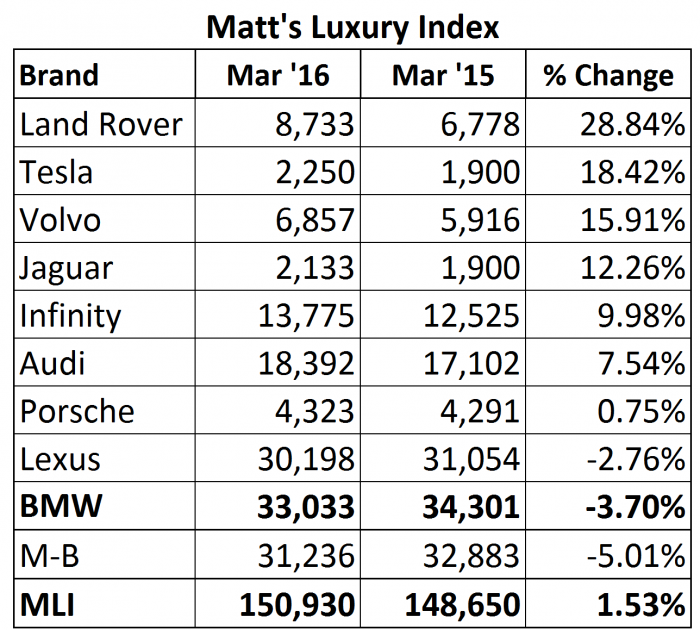 The product mix shows up as well in Matt’s Luxury Index. Overall, the index is up just shy of 2%. Land Rover is nothing but CUVs and SUVs. Tesla has the Model X, Porsche has added the Mecan. Volvo is doing well with the XC90. Mercedes’ numbers are a bit surprising, given it’s breadth of SUV offerings. Lexus dealers are still wanting a three-row SUV to accompany the market-leading RX, and look to finally get their wish, but not for a year or two. Anyway, it’s been another tough month for BMW. Being a sedan heavy line-up is hurting sales in the US, with our cheap gas, and the apparently insatiable demand for CUVs and SUVs. The announced X7, as well as more variants of current products, like the X5 40e, will surely be good news.

Of particular note in March, were strong increases in the sales of BMW Sports Activity Vehicles, in particular the BMW X1 and the BMW X3.  The popular new BMW 7 Series continues its sales success, increasing by 16.1 percent over March 2015.

“It’s been a tumultuous first quarter of the year for business in the U.S. with plenty of volatility even in the premium vehicle segment,” said Ludwig Willisch, President and CEO, BMW of North America. “The desire for premium Sports Activity Vehicles continues accelerating at a strong pace in the U.S. and I’m very pleased that our SAV plant in South Carolina will make another production increase in the months ahead to help us satisfy the ever-growing demand for our X models.” 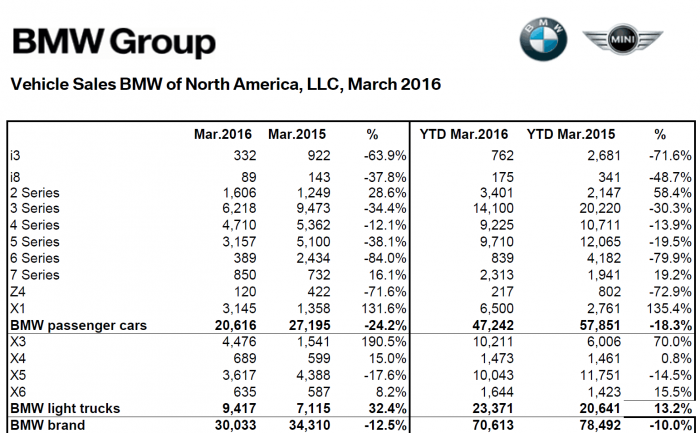 BMW Off to Best Start of the Year Ever

The BMW i design DNA