BMW NA March sales rose 3.3% compared to last year while US light vehicle deliveries dropped 1.7% overall. The growth was based on very good performance from the X3 and X5. Statistically, the 7 series seemed to have a good month up 10%, but when one sees this was only 85 more cars, the importance is somewhat dimmed.

Trends in US light vehicle sales don’t look that good. Overall, sales are slowing while incentives are growing and the average time on lots for a car to be sold has risen to 70 days. For what it’s worth, this is the longest it’s been since 2009 in the midst of the last recession. All this adds up to tough sailing ahead. Even as the industry tries to buys sales with increasing incentives, the number of vehicles moved continues to decline.

Another interesting datum is that for the first half of March, light truck, CUVs and SUVs accounted for more than 60% of light vehicle sales. This is the highest number ever recorded. While this is good news for the F-150 and RAM, it’s not that great for BMW going forward. Besides the aforementioned 85 extra 7-series delivered, the only sedan that sold more this March than last was the 5-series. A statistically insignificant 4 extra units shipped this month when compared to last year. All the rest of the sedans were down. Some a little, some a lot. This does not bode well for the rest of the year. 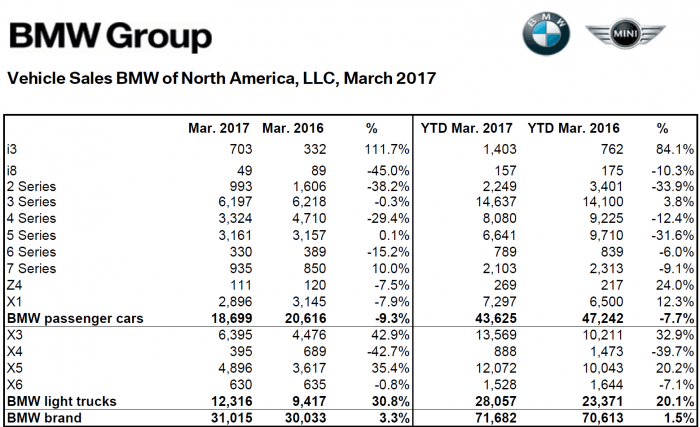 Looking at Matt’s Luxury Index, BMW should feel pretty good! While the MLI rose 3.4%, 0.1% greater than BMW NA, the Roundel was just a few percent off of Mercedes-Benz in total volume, and sold more than 10% more than Lexus. Overall, a pretty good month! 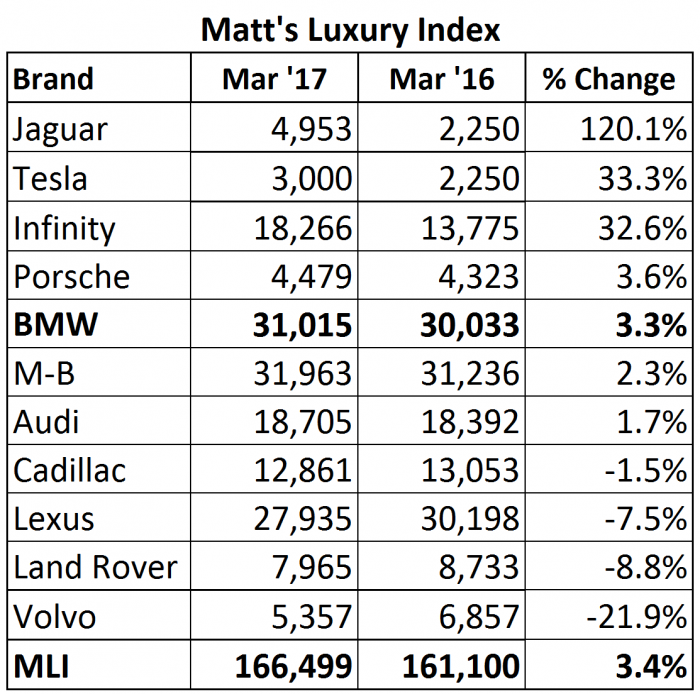 But something strange is in the air. Jaguar out sold Porsche. I guess they’ll have to come up with some more versions of the 911 to fill that gap! Actually, we find this a bit surprising as Jag only has the F-Pace, and Porsche has both the Macan and the Cayenne. Looking more closely at Porsche’s product mix, it seems that they are a SUV company that also makes sports cars. And that people don’t want 4 cylinder Boxter/Caymans that have a number that starts with a 7!

So for Porsche, they sell about one thousand cars that make their reputation, and about three thousand SUVs to bring home the bacon. For BMW, the mix is closer to 50/50. While it’s been a pretty good month for BMW, it’s going to be a very long year.

“With the arrival of Spring, thoughts naturally turn to new cars and March gave us a nice boost as our Sports Activity Vehicles, the X3 and X5 in particular, continue to drive the growing demand,” said Bernhard Kuhnt, President and CEO, BMW of North America. “Our new BMW 5 Series is just breaking into what is a difficult market for sedans but orders are solid and with two more variants on their way, we are optimistic for the months ahead.”

The BMW i8: The Official Launch