Two weeks and two wins. When was the last time we could say that about BMW in IMSA racing? The team, the drivers and the car are on a roll as they head into the meat of the season. 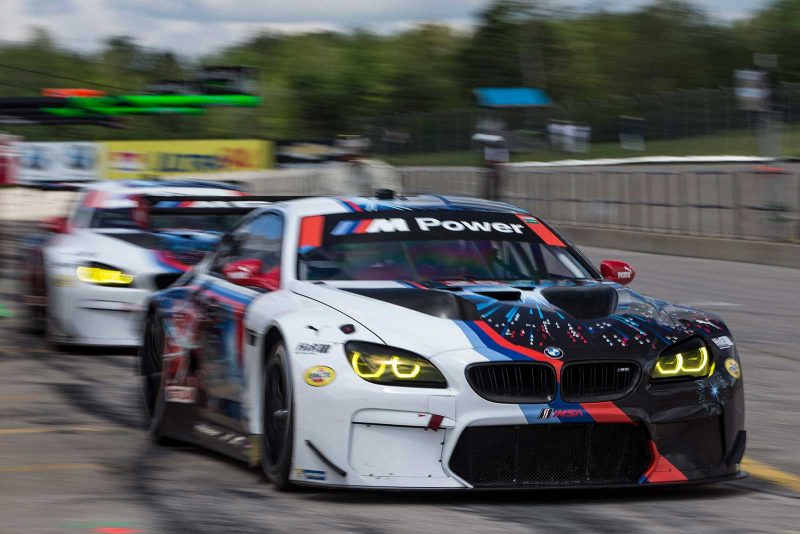 Auberlen, starting the No. 25 M6 from second, and Tomczyk, starting the No. 24 from fourth, wasted no time in racing to the front of the GTLM field as the green flag waved to start the two-hour-and-forty-minute race. Auberlen held the point with Tomczyk only some three seconds behind in second during the entire opening stint. Tomczyk was the first to pit on lap 35 for fuel, tires and to hand off to Edwards. Auberlen pitted on the next lap for full service and to let Sims take over the No. 25 M6. With one hour complete and after the field completely cycled through their stops on lap 45, Sims was P1 and Edwards was P3 sandwiching the No. 911 Porsche. 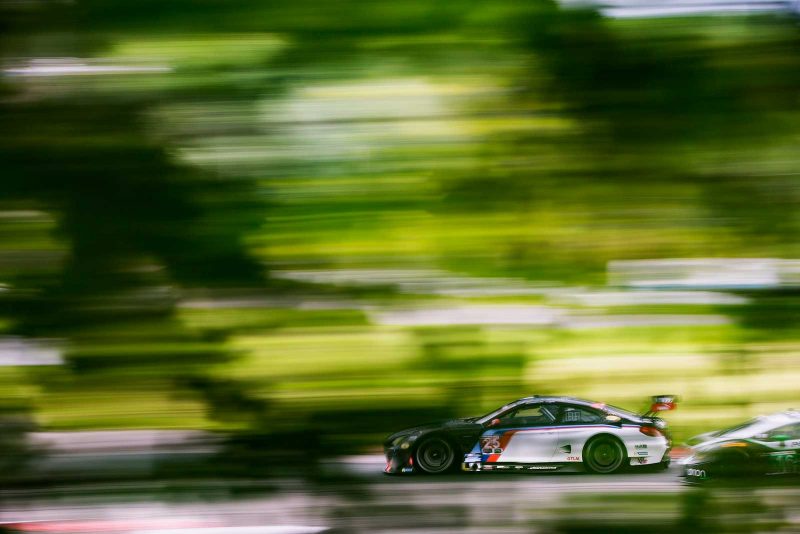 With one hour remaining, Sims held a two second lead in first having completed 77 laps. Edwards was eight seconds behind his teammate, in third. Running a longer second stint, Edwards pitted on lap 78 for full service. He rejoined the race in P3. Sims pitted on lap 80, also remaining in the car after full service. Sims rejoined the race in third, the No. 24 M6 moving to second and the No. 911 Porsche moving into the lead.

At 51 minutes to go, the race’s first full-course caution period occurred for a prototype car off in turn two. Rain came and soaked the back straight, but quickly abated and all GTLM cars remained on slicks. The green flag flew on lap 90 and by the next lap both Edwards and Sims carefully negotiated the drying track to take back the first and second positions respectively. Lap 93 saw Sims race the No. 25 M6 back into the lead while Edwards fell back to third. On lap 108 the No. 911 Porsche fell back, promoting Edwards back to second. 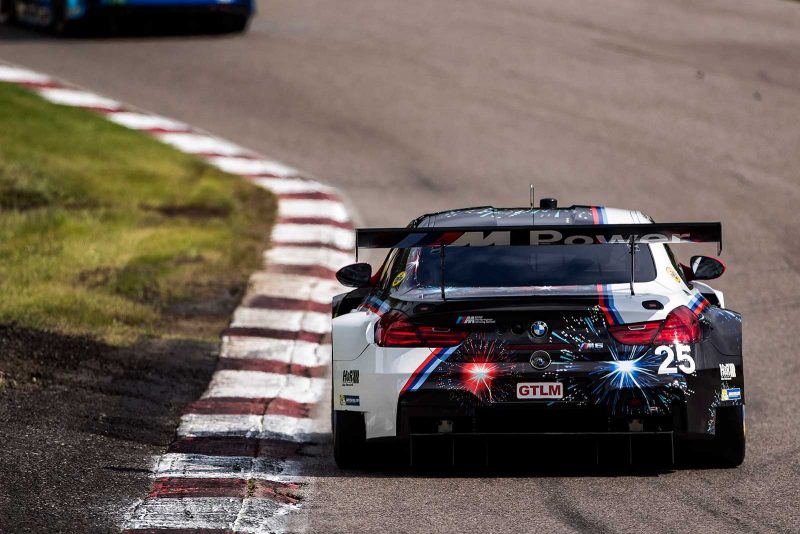 The race’s second full-course yellow came on lap 102 for an accident in turn four. Not long after the green flag flew the race was slowed to an even greater extent by a hard rain that ultimately caused the race to end under a third yellow flag on lap 117. At the checkered flag it was Sims P1 in the No. 25 M6 for a second consecutive win and Edwards P2 for a season’s-best finish in the No. 24 M6.

“The weather caused some concern, but we had the pace and were able to control the race,” said Neil Fife, BMW Team RLL Race Engineer. “It has been an enormous effort to get us to this point and we are very pleased to race the M6 to a 1-2 finish. Great job by everyone.” 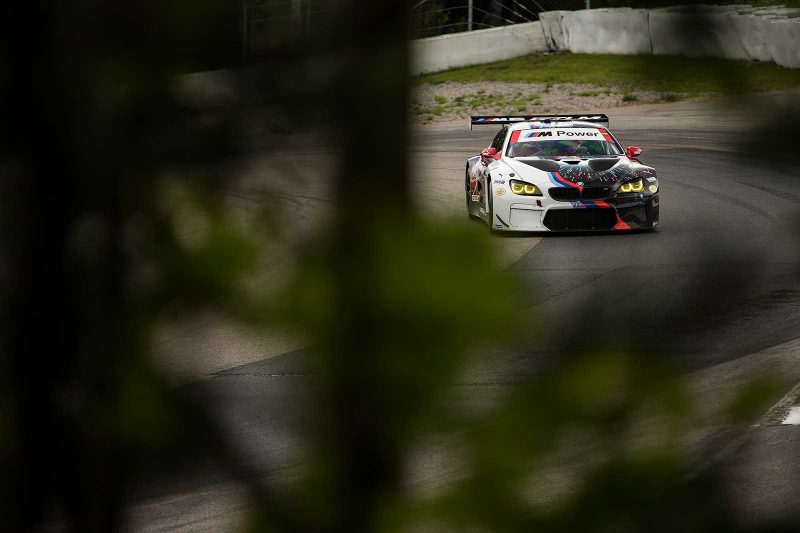 Bill Auberlen, driver No. 25 BMW M6 GTLM (P1): “Today is as good as it gets. Alex did a great job today no matter what the weather. I am proud to share my 57th win with him.”

Alexander Sims, driver No. 25 BMW M6 GTLM (P1): “That was an awesome race! There was quite a bit of ducking and diving, but even when the rain fell and we were still on slicks I believe we were the strongest car. Honestly, my first five or six laps were spent still getting comfortable with this track, but once I found the groove I really started to love this place.” 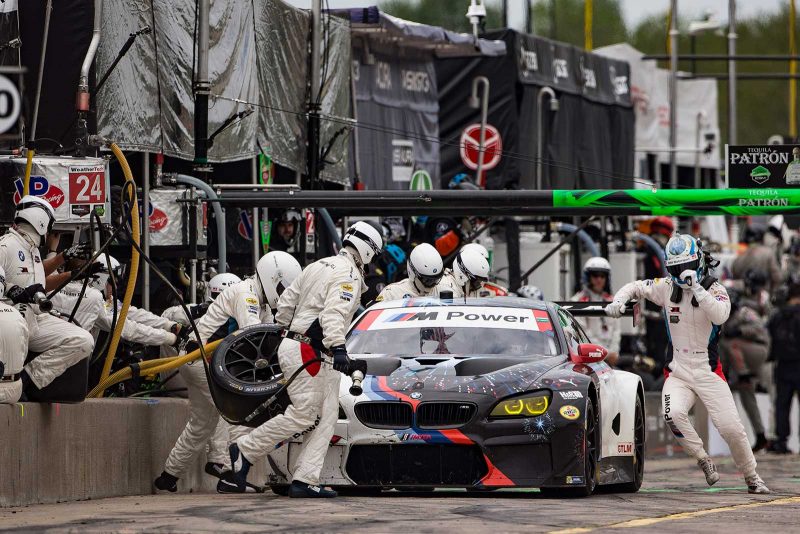 Martin Tomczyk, driver No. 24 BMW M6 GTLM (P2): “What an exciting race! We have all worked very hard to get to this point and a 1-2 is a fabulous result for BMW.”
Round Seven of the 2017 IMSA WeatherTech SportsCar Championship, the Northeast Grand Prix, will be held July 22 at Lime Rock Park, in Lakeville, Conn. The race will be broadcast on Fox Sports 2 beginning at 3:00 p.m. ET. Follow BMW Team RLL on Twitter at @BMWUSARacing for “from-the-pit-box” updates all weekend.