Official Release April 1st 2018: A worn valve cap in the middle of the Icelandic ice desert, a gear lever broken off in the depths of the Brazilian jungle or a split oil sump in the hamada: this kind of problem often leads to a lengthy interruption if not the end of a motorcycle tour or a long-distance trip on two wheels. Enter 3D printing on the go. 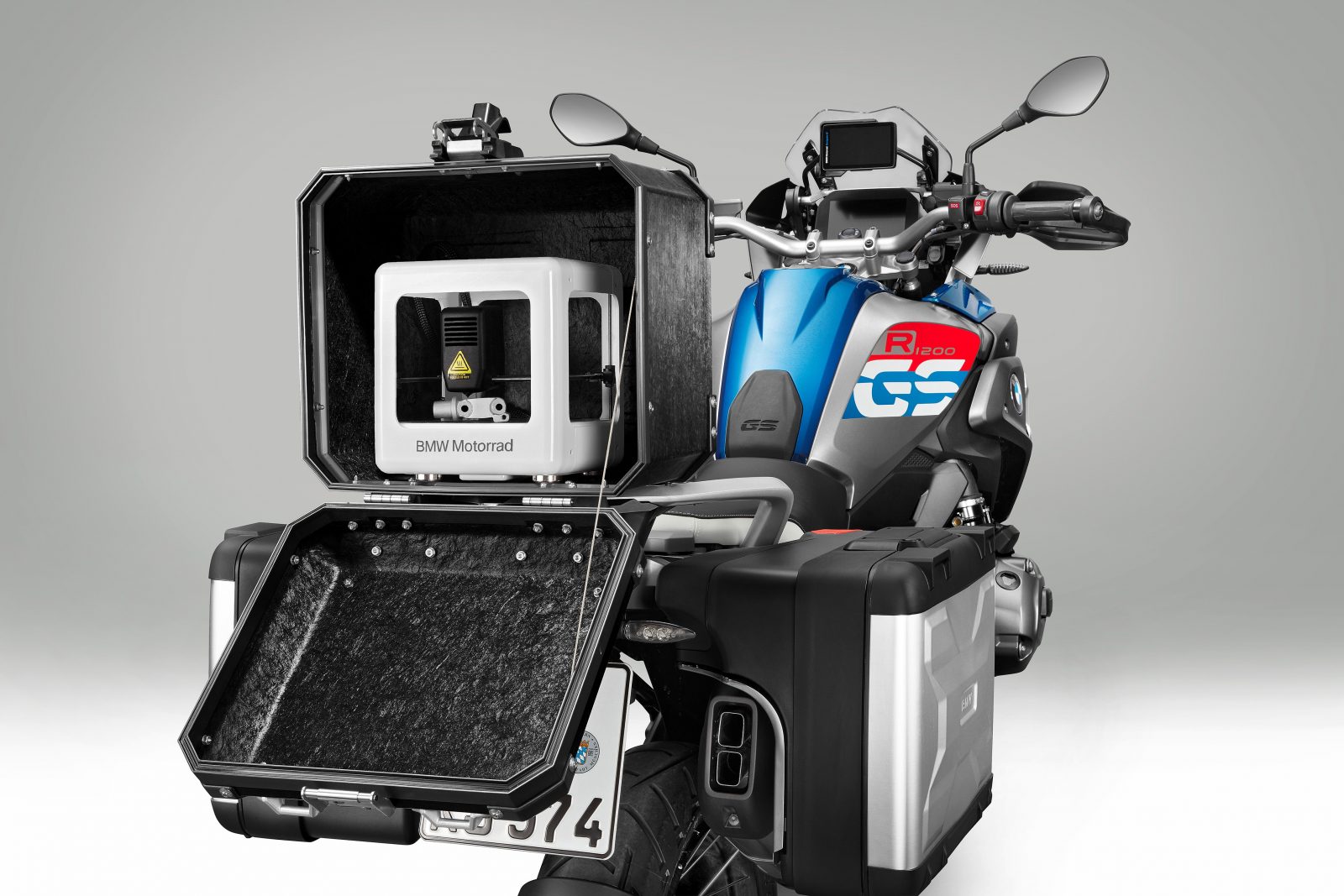 For this reason BMW Motorrad will be offering BMW Motorrad iParts as an optional equipment item from this summer. This is a 3D printing system which will allow BMW Motorrad dealers and customers to print out spare parts as required on site so as to be able to continue their journey as quickly as possible.

For this purpose, 250 selected BMW Motorrad sales partners worldwide will be initially fitted with a permanently installed 3D printing system. This system, which includes an integrated processing centre, allows the manufacture and subsequent machining of large and complex parts such as bevel gears, crown gears and engine housings. In this way, BMW Motorrad will be raising the whole area of spare parts to a new level: the new system will mean that even very rarely required parts not generally stocked by BMW Motorrad sales partners can be supplied on a just-in-time basis.

3D Mobile Printers for transportation on the motorcycle.

Smaller parts such as handbrake, clutch or gear levers, valve caps, fork bridges and turn indicator glasses can even be printed out by BMW Motorrad customers themselves using the BMW Motorrad iParts 3D Mobile Printer. This can be done not just at home but even when out and about, since the handy high-tech device can be conveniently stowed in a top case or side case.

Integration of the 3D Mobile Printer in a specially developed CFRP top case.
In order to compensate for the additional weight of the mobile printer, a special top case made of CFRP has been developed offering a weight reduction of approximately 4.5 kg as compared to a standard top case. Special layer structuring in the CFRP fibre composition ensures noise and vibration damping for optimum, disruption-free use of the printer. It was also possible to integrate the power supply in the laminate so as to avoid cables being visible on the outside.

Download of design data and material specifications from the BMW iCloud via smartphone, tablet or PC onto the 3D printer.

The design data and material specifications required for printing purposes are supplied from the BMW iCloud, whether at the customer’s home or during travel: the data is downloaded directly onto the 3D printing systems via mobile phone, tablet or PC. A functioning internet connection is of course required for successful download.

Anyone travelling on their motorbike to particularly remote areas of the planet where an internet connection is not always available can make use of the optional equipment item BMW Motorrad iParts Explorer. This enables a selection of potentially required spare parts data to be saved directly on the smartphone before setting off on the journey.

Selective laser sintering – highly sophisticated laser technology for fast and precise manufacturing of spare parts.
3D printing was established in the area of parts development some 20 years ago in the form of so-called Rapid Prototyping. Even back then it was possible to create spare parts from plastic using laser technology and a CNC-controlled layering method. This technique has since advanced considerably and it is now possible to produce spare parts made of various metal alloys using Selective Laser Sintering (SLS).

In addition to creating parts from metals such as aluminium, steel and titanium, the BMW Motorrad iParts 3D printers also allow fast turn-out of plastic parts. This means that a turn indicator glass which is broken during a fall, for instance, can quickly be replaced with a print-out version. It is even possible to replace a cracked rear mirror using the BMW iParts 3D printers.

Intensive lab testing of the BMW Motorrad iPart 3D Mobile Printers as well as field trials in extreme climate zones across the planet.

BMW Motorrad has carried out extensive functional and strength tests on all the parts approved for 3D printing – initially in the lab and later in the field. Ignaz Druckmeyer, Head of BMW Motorrad iParts: “Once again we were able to draw on in-house synergies and tap into the relevant preliminary development work carried out by BMW Automobiles. Ultimately the challenge was to develop a small, portable yet high-performance 3D printer for transportation on the motorcycle. We managed to achieve this in the form of the BMW Motorrad iPart 3D Mobile Printer. The SLS unit is equipped with its own power supply – a high-performance saline battery – and was subjected to a range of highly rigorous functional tests both in extreme cold and in blistering heat with a high level of dust exposure.”

The BMW Motorrad iPart 3D Mobile Printer was most recently exposed to extreme conditions in the Australian outback, for example. Even at peak temperatures of plus 48 degrees Celsius and with high volumes of dust, the replicated parts equalled their conventionally manufactured counterparts in all respects.