March was a shockingly good month for US Light Vehicle Sales. Overall, US sales rose 6.4% compared to March last year. There are a couple drivers for this growth: The biggest driver is that this year, March had an extra weekend. Also, SPIFFs were up. SPIFFs, or “Special Pricing Incentives For Fast sales” are the rebates, discounts, special interest rates and dealer incentives that the manufacturer offers to goose sales. Job growth and increasing consumer confidence last month helped as well.

BMW NA was up 1%. While that lags the whole US Light Vehicle market (up 6.4%) as well as Matt’s Luxury Index (up 3.9%), it was a better month than Mercedes-Benz had. M-B dropped 1.8%. The sales gap last month was very small, just 64 more cars moved, or about 2 a day, would have pushed M-B into second place. 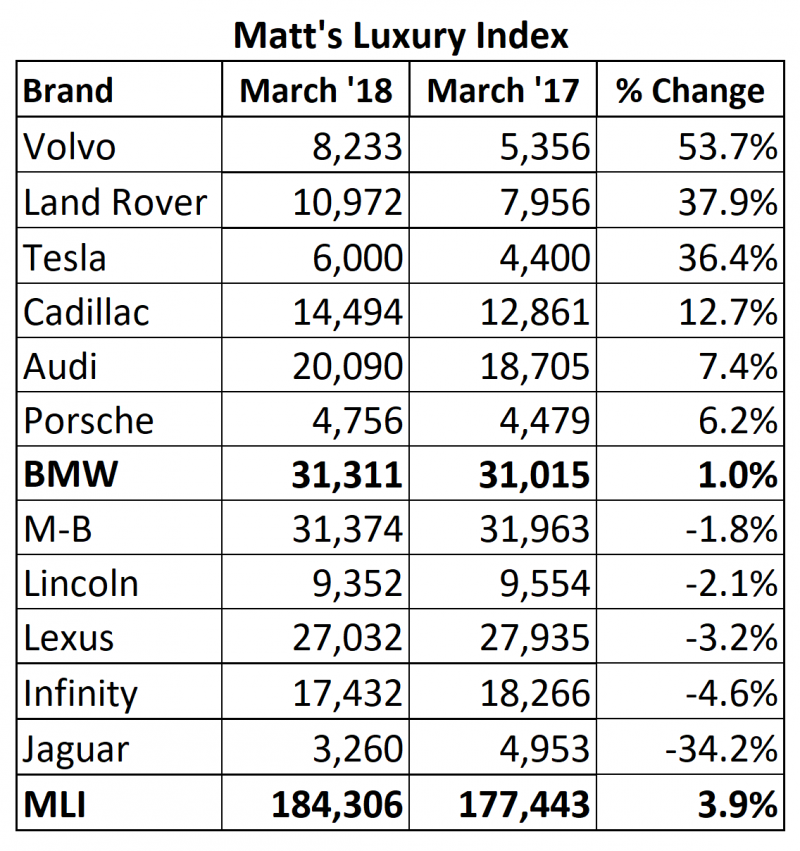 Other interesting news in the MLI: Model 3 shipments from Tesla have moved them ahead of Jaguar and Porsche in terms of units sold. And they are nipping on the heals of Lincoln (a new member of the MLI) and Volvo! Land Rover sales are shockingly high, driven by new model releases. Volvo and Land Rover both had good months as well, not much of a surprise, as both have strong SUV offerings. The drop at Jaguar is shocking. Last month, I drove the F-Type S Shooting Brake (read station wagon). It was a wonderful ride, and Geneva, my Bernese Mountain Dog, would fit in the back!

The messaging from BMW is what you’d expect: Sales are up! X-series stuff is about 50% of product mix, and the 5-series is doing well. (I drove the M5 at Mazda Raceway Laguna Seca last month. What a car!)

Official News: Woodcliff Lake, NJ – April 3, 2018… Sales of BMW brand vehicles increased 1 percent in March 2018 for a total of 31,311 compared to 31,015 vehicles sold in March 2017. Through Q1 2018, BMW brand sales are up 3.0 percent year-over-year. BMW brand sales in March 2018 were once again led by BMW’s lineup of Sports Activity Vehicles and the BMW 5 Series, which has shown strong growth for nine straight months. “It’s Spring and thoughts naturally turn to new cars with March giving us another uptick in sales – five months in a row – as the 5 Series continues to defy conventional thinking and proves there’s still a place in the market for a great sedan,” said Bernhard Kuhnt, President and CEO, BMW of North America. “At the same time, our X model lineup is expanding with the X2 now fully in the marketplace and Sports Activity Vehicles nearing 50% of our sales.”

Note: I have a new (real) job. I’m now working at Atonarp U.S., Inc. a manufacturer of mass spectrometers for industrial process control. Getting my sea-legs there is why Gabe has been handling this for the last few months. But now I’ve got a better handle on my schedule, and I’m back in the saddle, time permitting.