The 2018 BMW 640i xDrive Gran Turismo is the type of car that has confounded journalists. While its sales have eclipsed the traditional wagon in many markets, reviews are tepid at best. So we thought we’d try to assess the all new 6GT a different way by testing it on the type of epic road trip it was designed for. To do that we also wanted to suspend belief for a bit and wonder if we and the automotive world (so quick to judge the original 5GT negatively) has gotten it wrong.

What if BMW was ahead of the curve on the 5 Series GT? For a moment let’s not allow our aesthetic sensibilities to cloud our judgment or think about how it killed the gorgeous 5 Series wagon in the US. What if (I know this is a stretch but stay with me) BMW was spot on with the Gran Turismo formula? 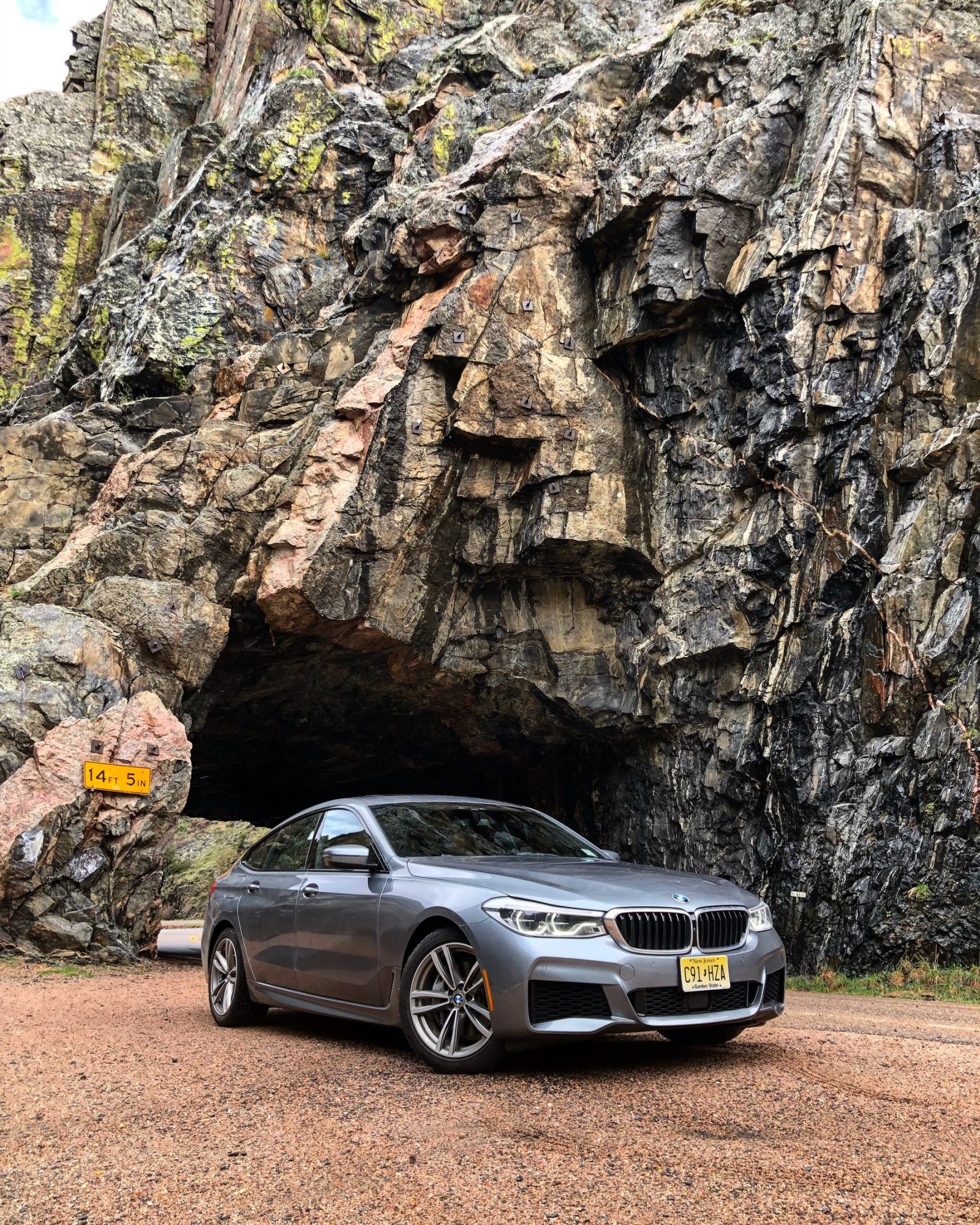 In this alternative universe, the replacement for the 5 Series GT would have been highly anticipated. We would have swooned over the 6GT’s lower and longer styling. Its new found subtlety in feedback and dramatically improved performance (thanks to shedding hundreds of pounds) would be noted. We would praise its updated technology and its intelligent use of 5 and 7 series components creating perhaps the perfect “Gran Turismo” in the modern sense.

Then that narrative would have been upended because the active roll stabilization, weight reduction and xDrive combine for a car that actually feels like a big BMW should. Eager, engaging and full of utility, we would talk about how the 6GT might just be a new benchmark in a class of one (because it is). 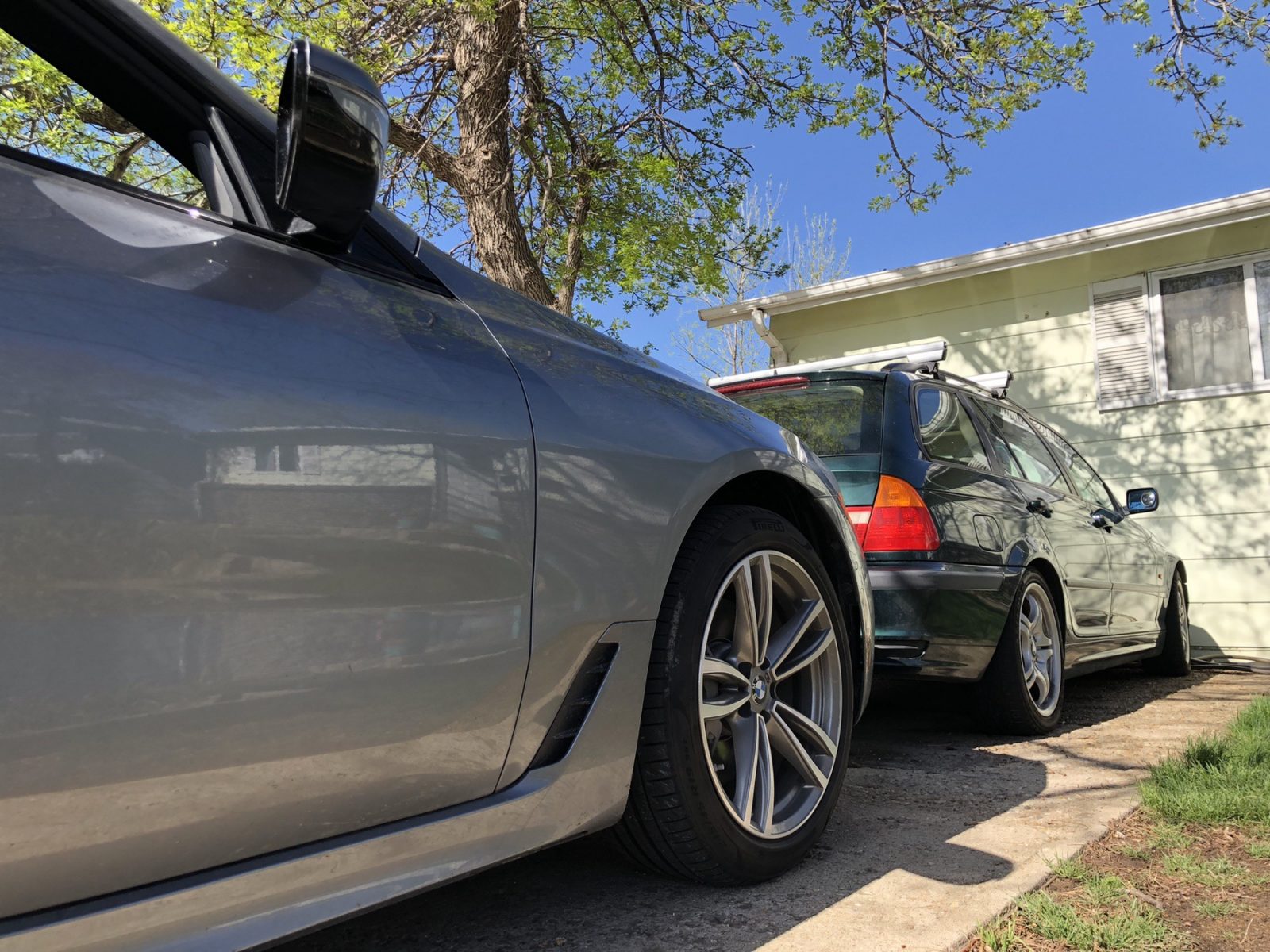 But that’s not what happened. Instead the 5GT was received with a tepid shrug and wrinkled noses when released in 2011. Worse still it killed the beloved 5 Series wagon in the US and became a figurehead of all that was wrong at BMW. Fast forward six years and the news seemed to get worse. We learned BMW was doubling down on the formula, making another, moving it upmarket and using a 6 Series badge.

Then reviews dripped in with lukewarm praise born out of ambivalence. So we asked ourselves – are we missing something? There’s an idea here (good or bad) that is clearly lost on the automotive press and on a lot of the public. Is BMW creating a formula no one is interested in? Or perhaps, are we not yet living in the future that BMW sees as the present? 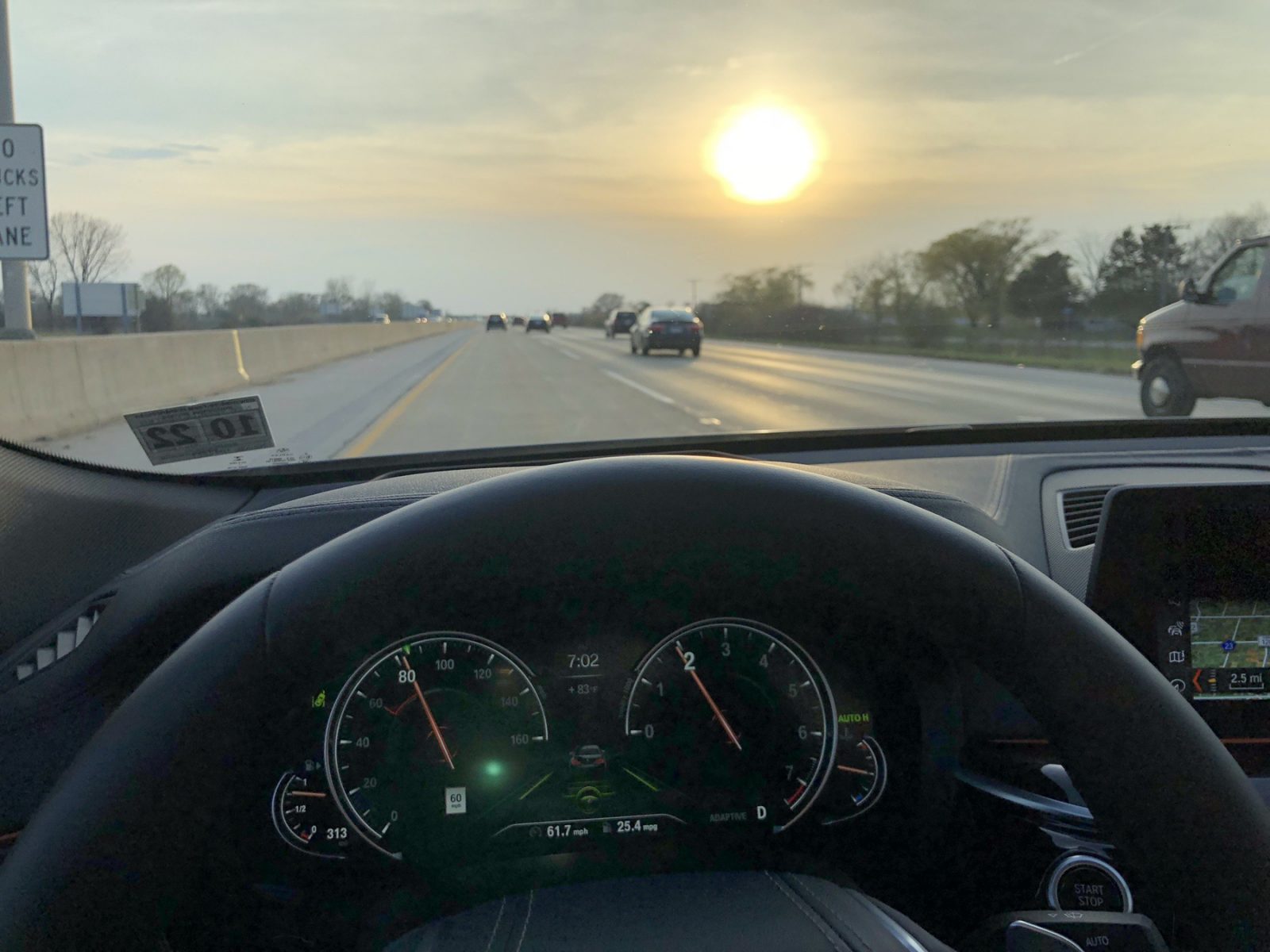 Let’s be honest. We could test a 6GT for a week and never really know. To really understand this car (and the concept) we felt we needed to push it to the absolute limits. For the 6GT that doesn’t mean the Nurburgring. That means the most epic road trip we can throw at it. So a plan was hatched. From Chicago to Denver and back with two kids, two adults and a case of rare Michigan craft beer for transport. 2,500 miles of American highway, caffeine and turkey jerky. Let’s do it. 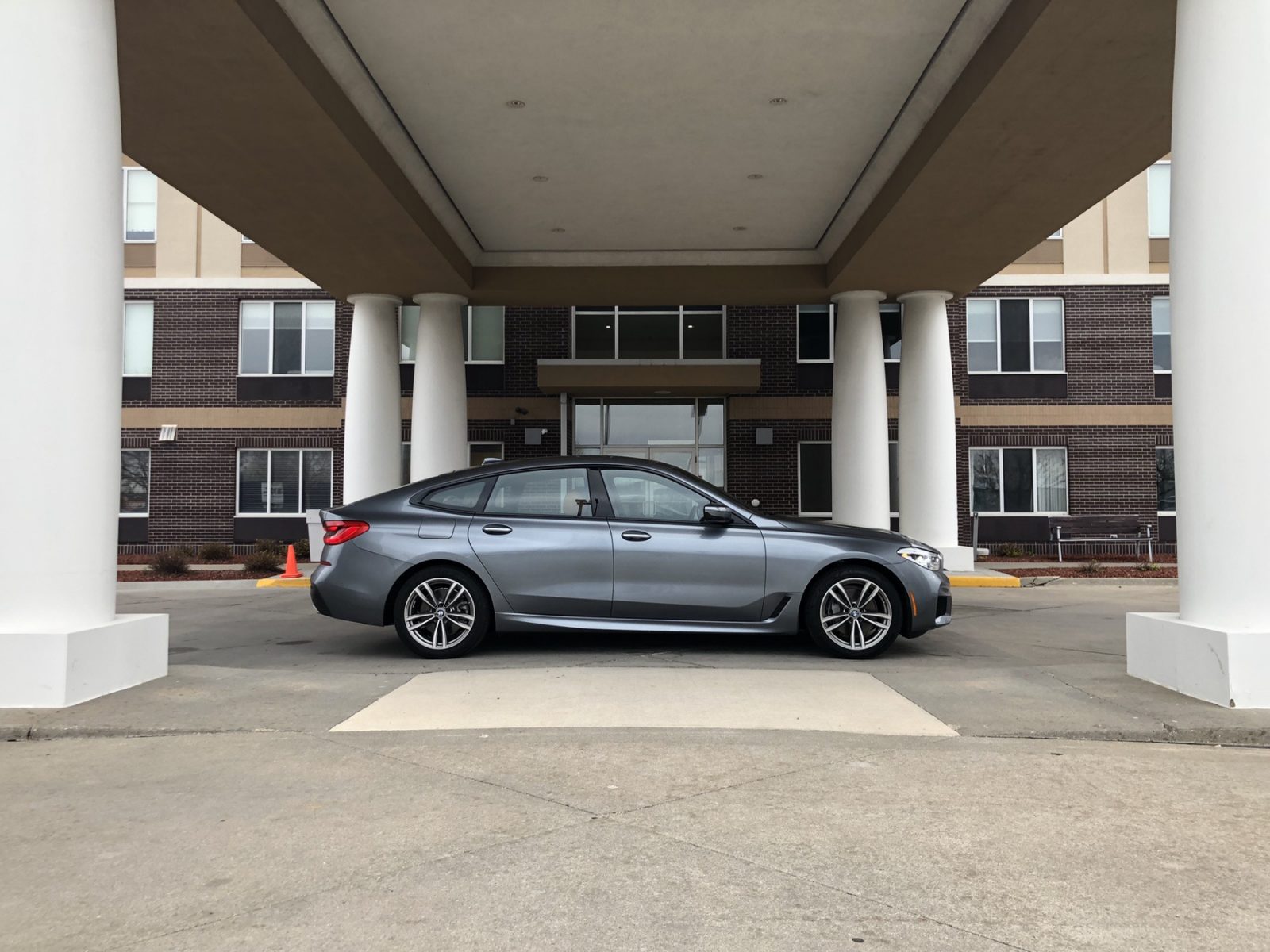 The Car and the Performance

The 6GT imported in the US comes with one fine engine 335 hp turbocharged inline six. Paired with xDrive and the familiar ZF 8 speed automatic, this is a car that effortlessly hits 0-60 in 4.7 seconds and yet returned over 26 MPG (averaging just over 70 mph for 2500 miles). Let’s just get it out of the way. This car is faultless in terms of performance. Forget the looks for a moment; the 6GT will do everything you need and more every day without trying.

The highway is where this car was designed to thrive, but it was the canyon roads of the Rocky Mountains where it really surprised. The Active Roll Stabilization (that’s a self adjusting anti-roll bar to you and me) combined with active steering (it’s finally pretty good), adaptive suspension and xDrive create a surprisingly fluid and ultimately nimble grand tourer. It’s no 3 Series but the 6 Series GT is a legitimate joy to drive through mountain roads. That was not the case for the 5GT. 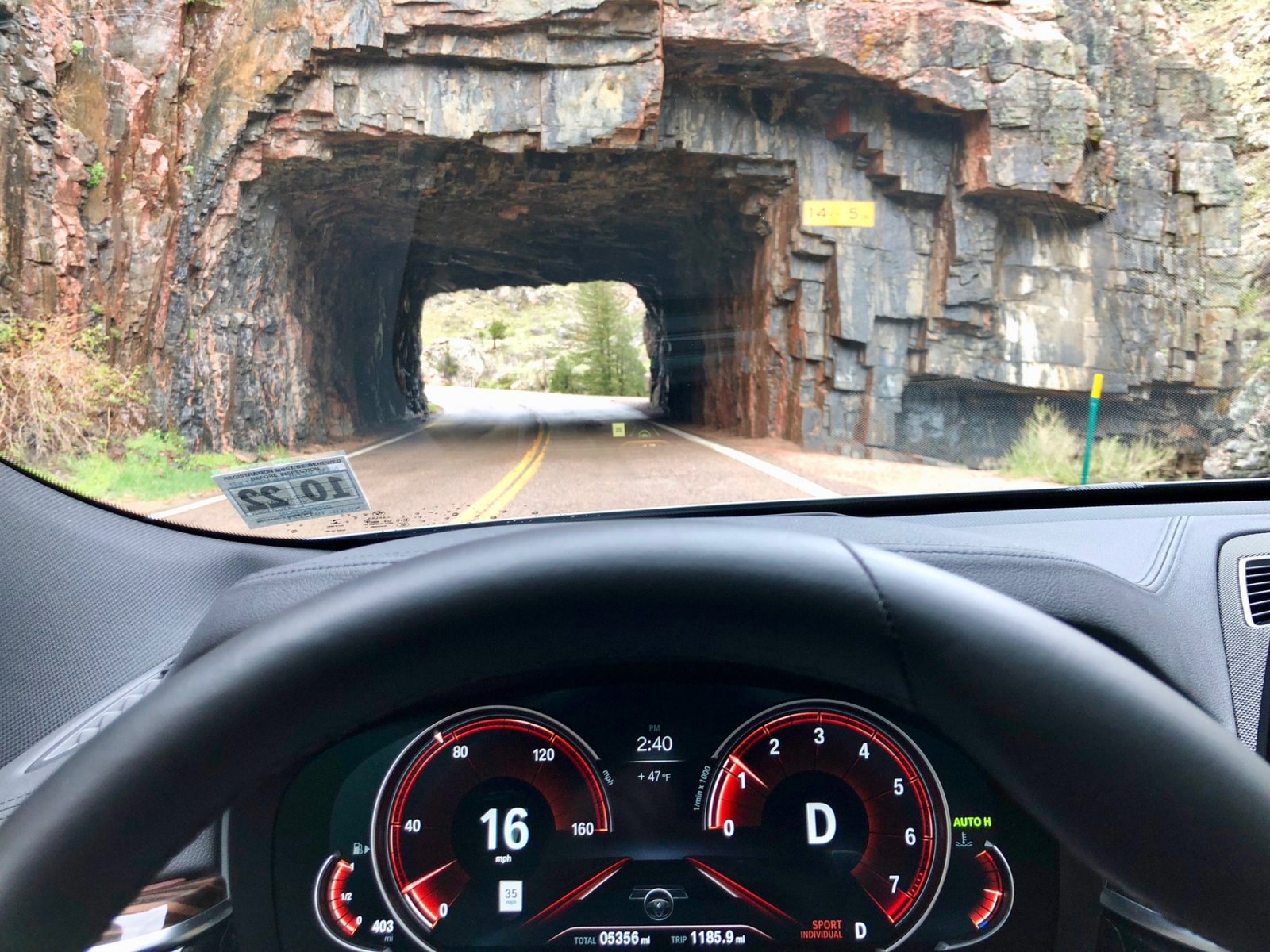 On the highway the 6GT crushes miles. Wind noise has been dramatically reduced over the 5GT and isolation (the good kind) is improved. Over the long (long long) haul the sport seats sacrificed some comfort in the lower seat cushion but if you’re concerned about such things we’d recommend sticking with the stoic seats or going with the Luxury seating package. Plus that $2600 package gets you ventilated and massaging seats. For our money, if you’re going to speak $86k on a car, spend an extra $2,600 and get your backside massaged on a daily basis. 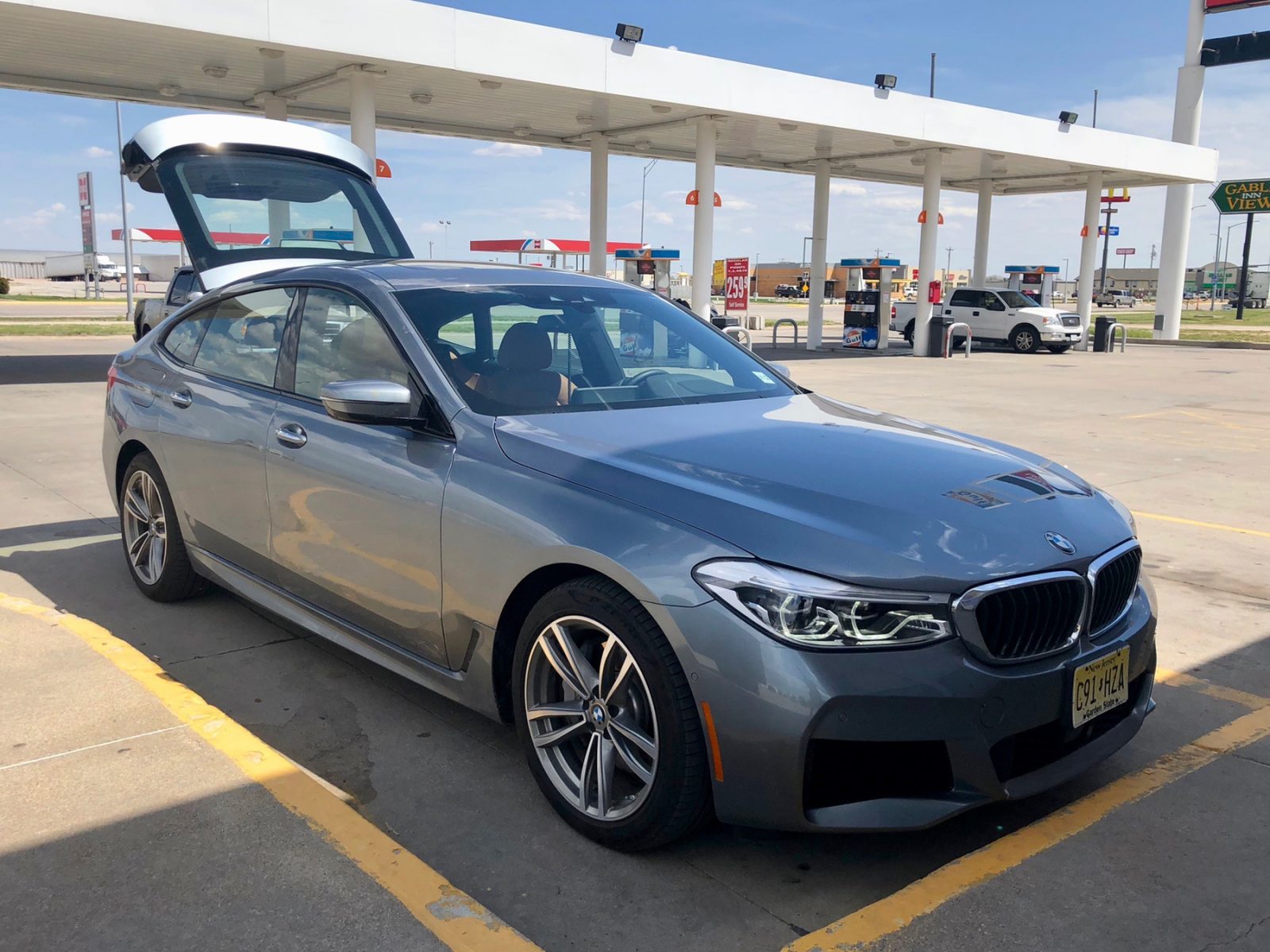 The 6GT is an interesting mix of a 7 series and an X5. The rear seat room is almost on par with the 7 Series in overall room. Our test car had the optional adjustable rear seating which helped tremendously putting kids to sleep while racking up the miles.

The trunk is massive. Deeper than an X5 and much more versatile than a 7 Series, this was clearly a focal point of BMW product planners. I was able to pack two adults, two kids, all of their luggage and a case of hard to find Michigan craft beer (meant for my beer loving brother-in-law) with plenty of room to spare.

The 5GT’s innovative yet complex (and heavy) lift-back hatch has made way for a more standard hatch in the 6GT. On paper it’s a downgrade but in reality less feels like more here. 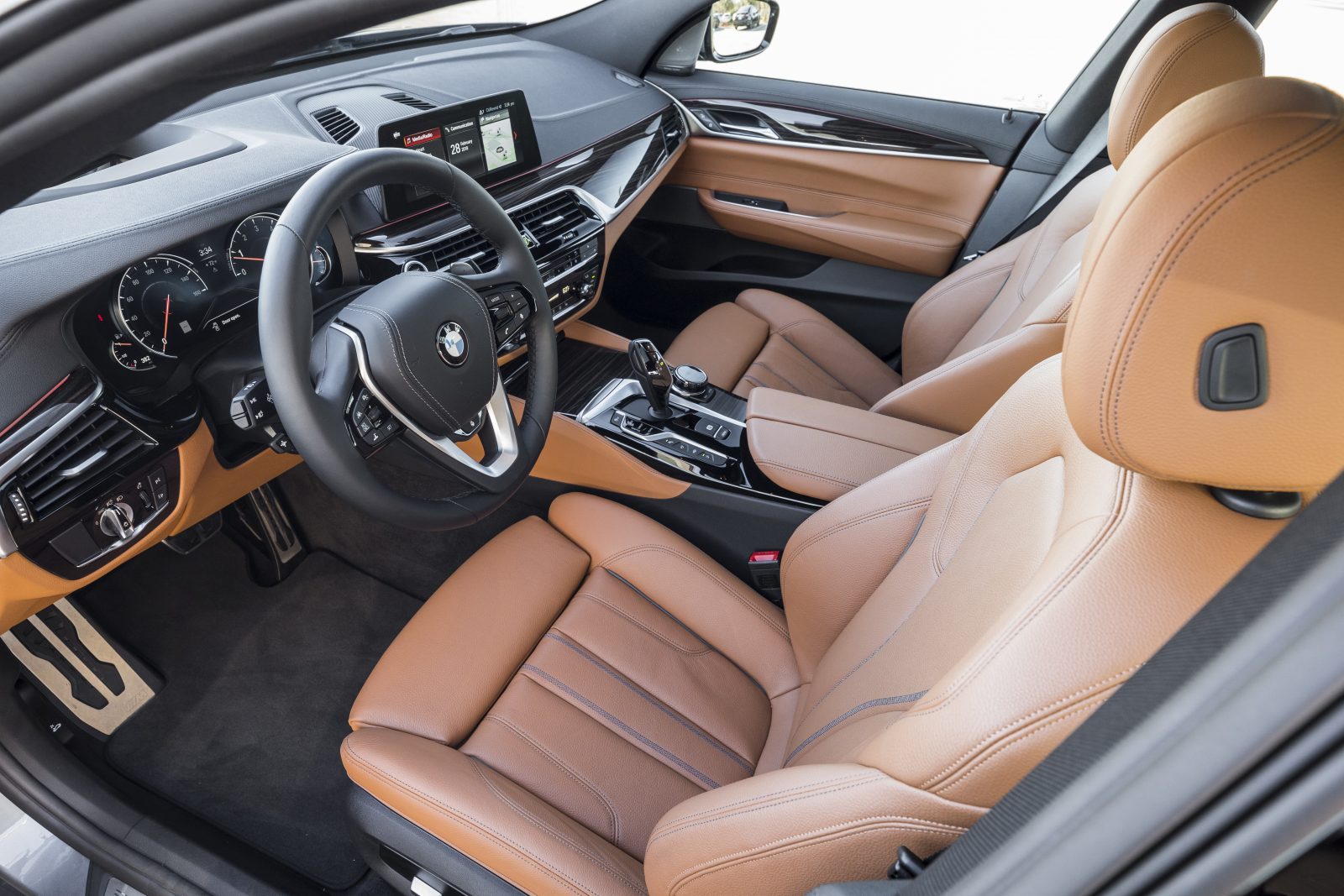 In many ways, less is more was the mindset BMW must have had when reinventing this car from the 5GT. In terms of packaging the 6GT follows the same principles. But gone is the requirement (by BMW designers) that the second row is higher than the first. With that out of the way BMW was able to lower the rear of the car for a lower roofline without impacting headroom and luggage space. It also makes for a more attractive crossover/wagon type of vehicle.

Speaking of that backseat, it’s likely the most comfortable place in any BMW outside of a 7 Series. For 2,500 miles the kids in the back (a tall six and nine year old) had their seats reclined and legs dangling in total comfort. If success of a car is happy children for 8 hours a day, then the 6GT should win every award. 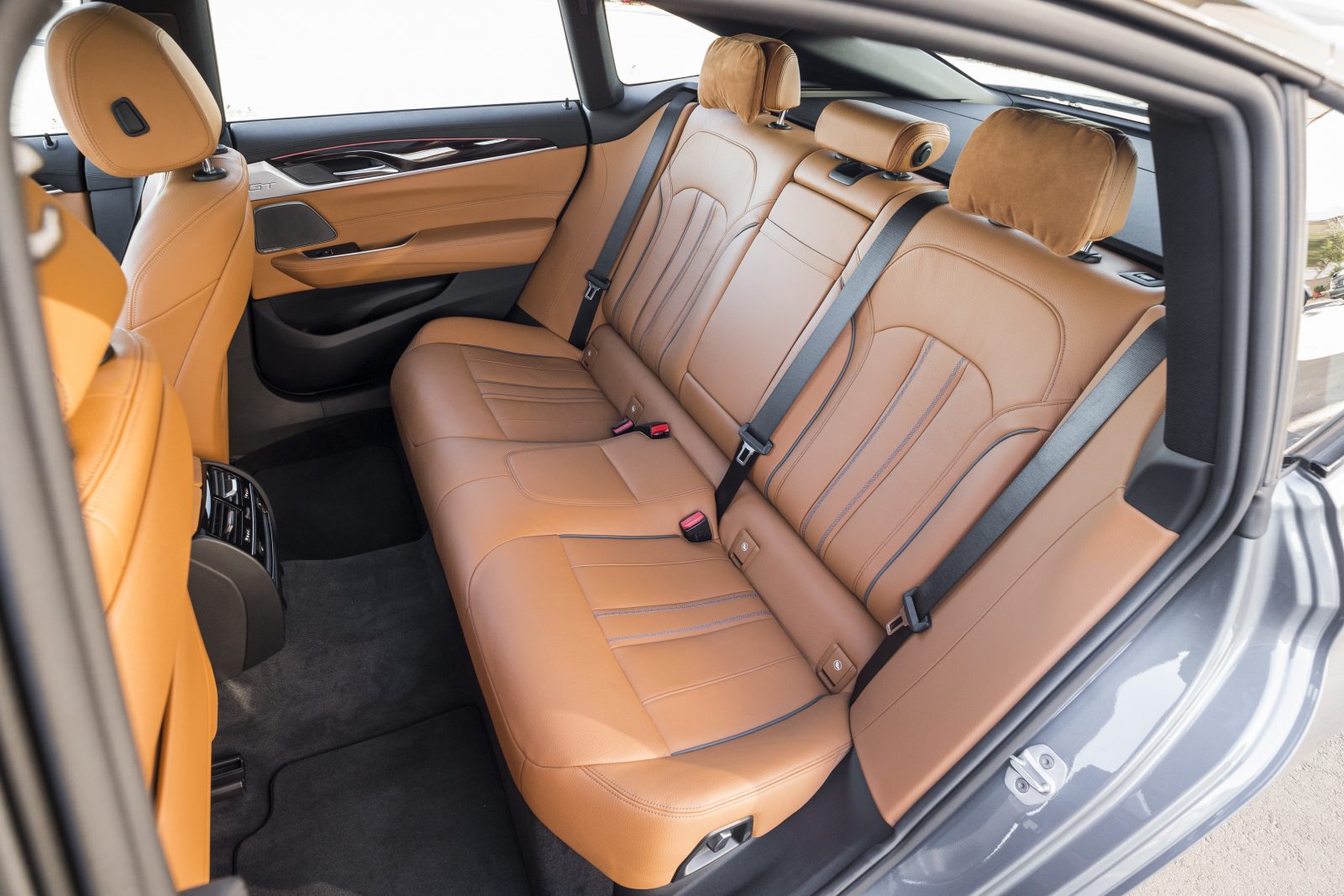 While our test car was void of luxuries like seat massagers, the recline function came in handy in both comfort and to dial in the angles of the trunk when packing.

Upfront the sport seats weren’t the most luxurious BMW has an offer and were decidedly less cushioned than the ones I had in a recent 7 Series. For 8+ hours days they we’re a bit tiring. In any other (more sensible) road trip situation they would likely be fine. 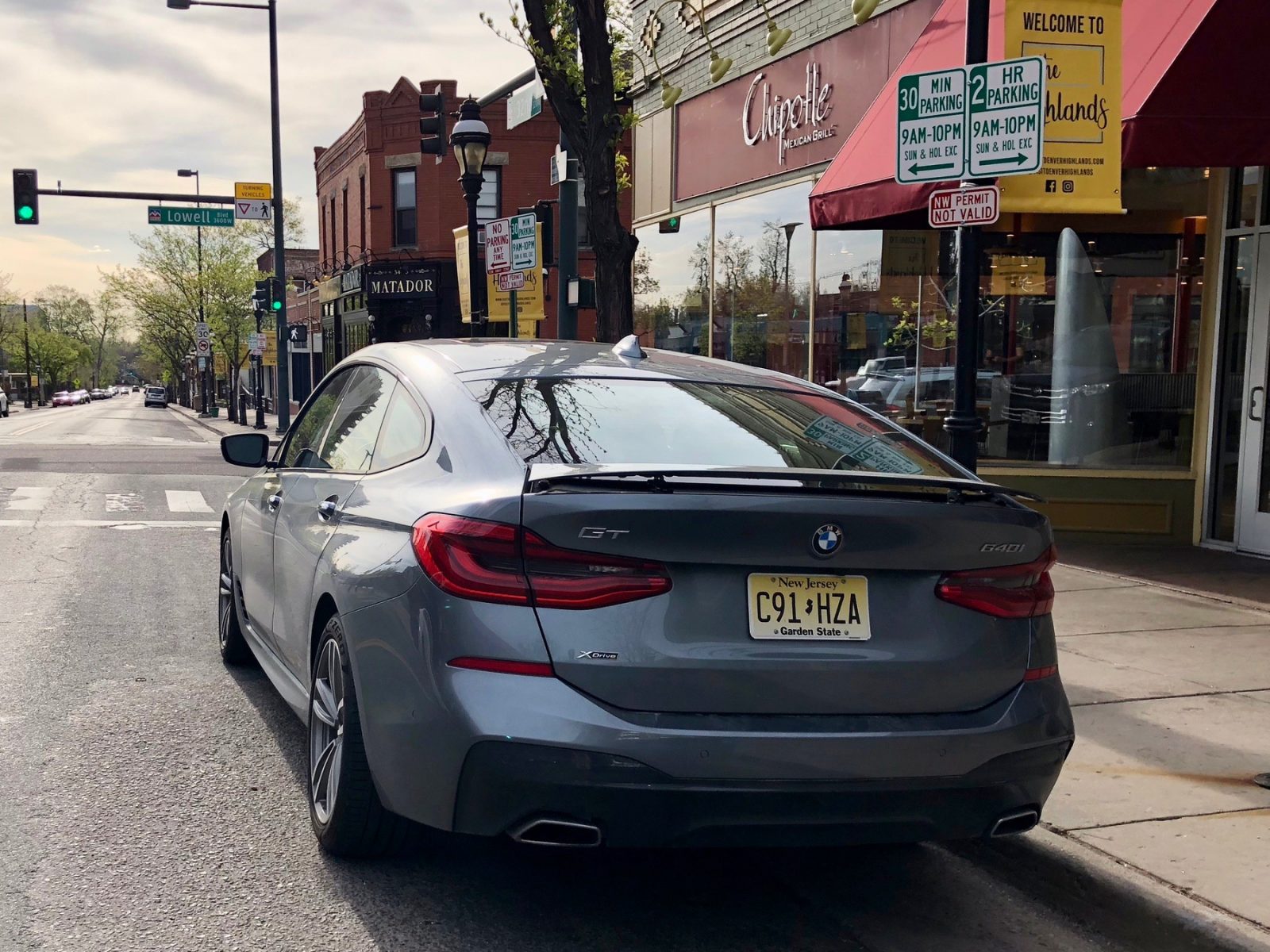 In preparations for the trip I stripped out the two-piece luggage cover to free up space and add some flexibility. I was assumed it would increase interior noise noticeably but I could barely notice a change.

On the highway, the ActiveCruise combined with the damping set on comfort and the low cabin noise made for a serene drive. 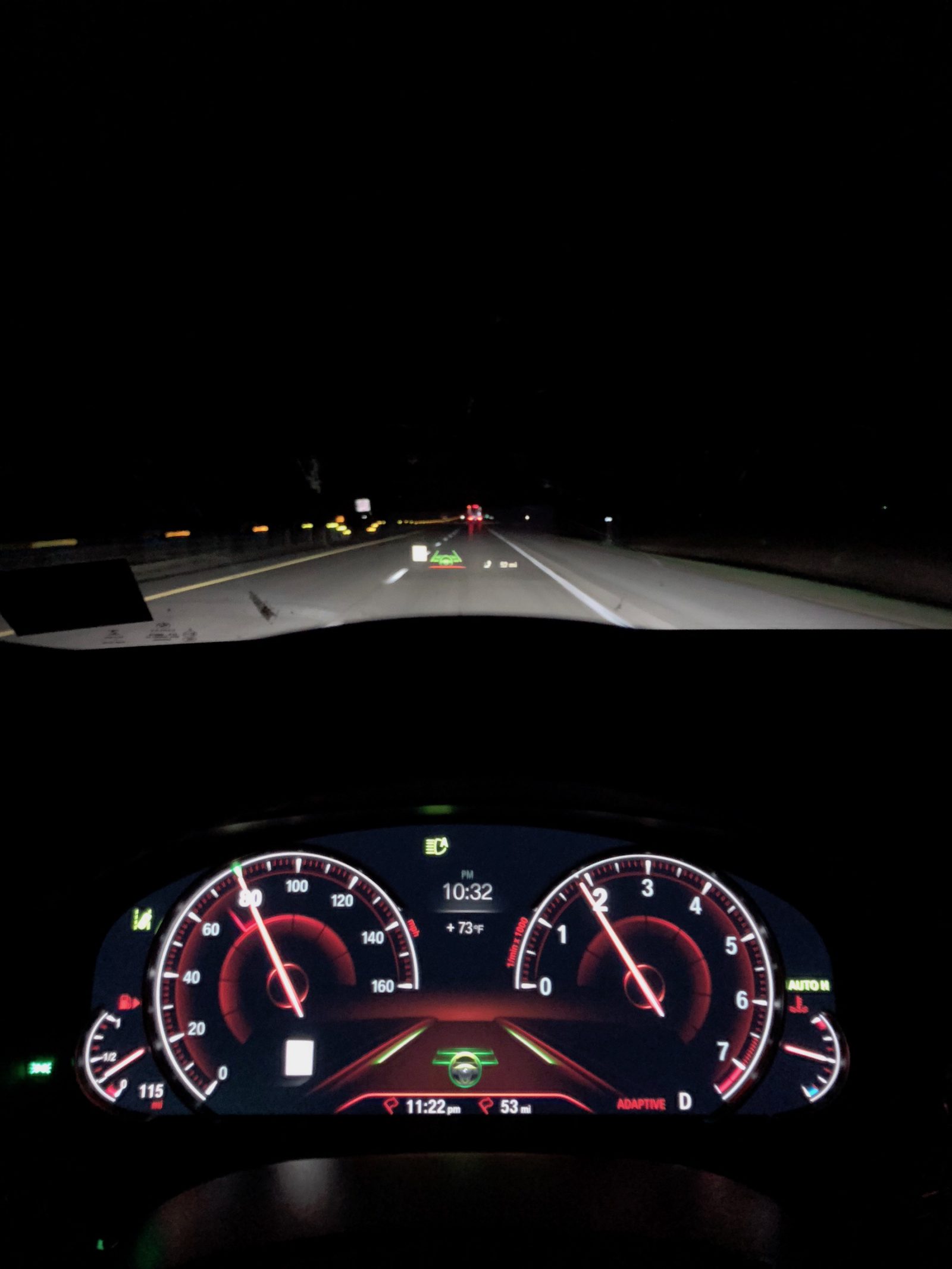 BMW’s new iDrive 6.0 is a welcome improvement with touchscreen and gesture control. There are issues with the interface consistency (especially when considering the digital garages and other interactivity in the cabin) and there are some pieces of functionality that seemed oddly categorized or organized. But in general this is just about the best that the industry has to offer.

Our car was equipped with Active Cruise Control. This isn’t an answer to Tesla’s Autpilot but it is at the very least quite a bit safer. Active Assistance is a system that combined radar cruise with lane keeping technology. That means you can set your speed and it will adjust based on what’s in front of you (down to zero and back) while the steering follows the road. But BMW being a conservative German company will only let you keep your hands off the wheel for 7 seconds before a gentle judge and 25 before audio warning. That means this is a system that is hands-on eyes on but definitely not fully mind on. What that means is that 7-8 hour days aren’t as cognitively taxing as they normally are. After 36 hours behind the wheel I can vouch for that. Being able to adjust my seat and my body for comfort (while taking hands off the wheel momentarily) was something I just got used to after a few hours. It’s a luxury that quickly became a necessity.

The great thing about this technology is that BMWNA has made it standard on every 6GT configuration. It’s a smart move given the price point and increasing expectations of customers who are potentially cross-shopping a Model S. 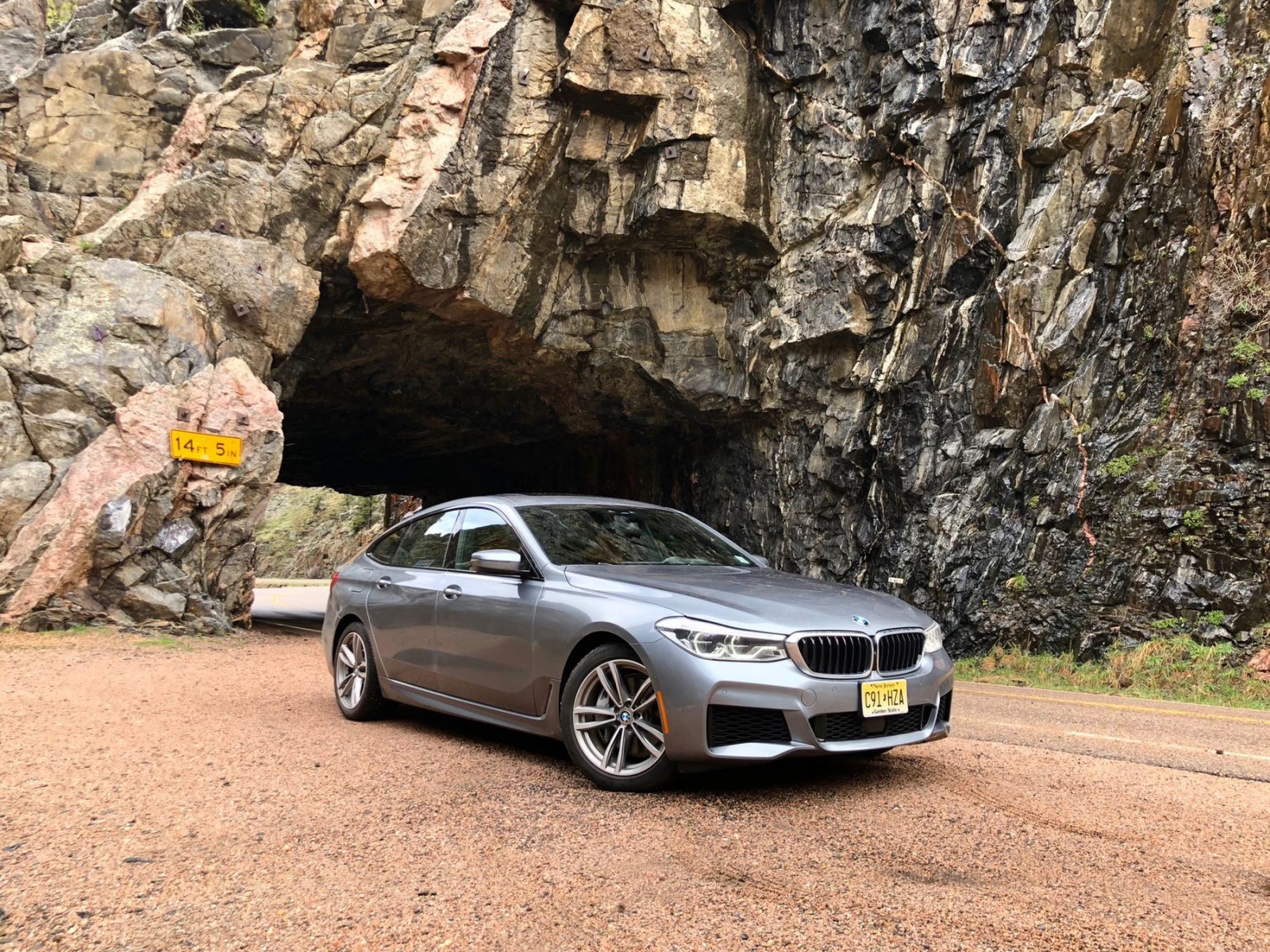 Priced at $84,010 our 640i xDrive Gran Turismo was specced as most would be – full to convenience and luxury features but without some of the ultra-luxury stuff like cooled seats and rear entertainment. It sounds like a lot of money but given the cost of the 7 Series (which it is most closely associated) there’s a decent amount of value here. Especially when you look at a similarly specced X5 which has less space and can’t quite match the performance or comfort of the 6GT. It makes you wonder why we don’t see more 6GTs given the incredible success of the X5. BMW doesn’t breakout 6GT sales from the overall 6 Series but it’s clear that they’re less than 1/10th of X5 sales monthly. And that’s an X5 that’s five years into its model cycle.

The 6GT is an answer to a question that maybe we should have been asking. Utility, comfort and performance are all boxes that he 6GT checks as well if not collectively better than any BMW. Yet it’s the shape of that functionality that turns most of us off. Maybe that’s our fault. It’s certainly a shape that grew on us over seven days and 2,500 miles. More than that, the concept itself proved to be spot-on in a way the 5GT or even a new X5 can’t match. Is this the future of the wagon? The future of the crossover? Either way the 2018 BMW 640i finally feels like the smart alternative that BMW has been promising us since it’s predecessor.