The all new 2020 3 Series Wagon is here and just think; in 20 years we in America will be able to buy one. Yes this is the first 3 Series wagon since the E36 that will not be official imported by BMWNA. And unfortunately it looks again like the pick of the range. With dynamics that match the sedan and a cargo area that is greater than an X3, the all new 3 Series wagon in many ways is the perfect BMW. Makes you wonder why Americans (and increasingly the rest of the world) prefers crossovers.

Read on for the full press release and photo gallery. 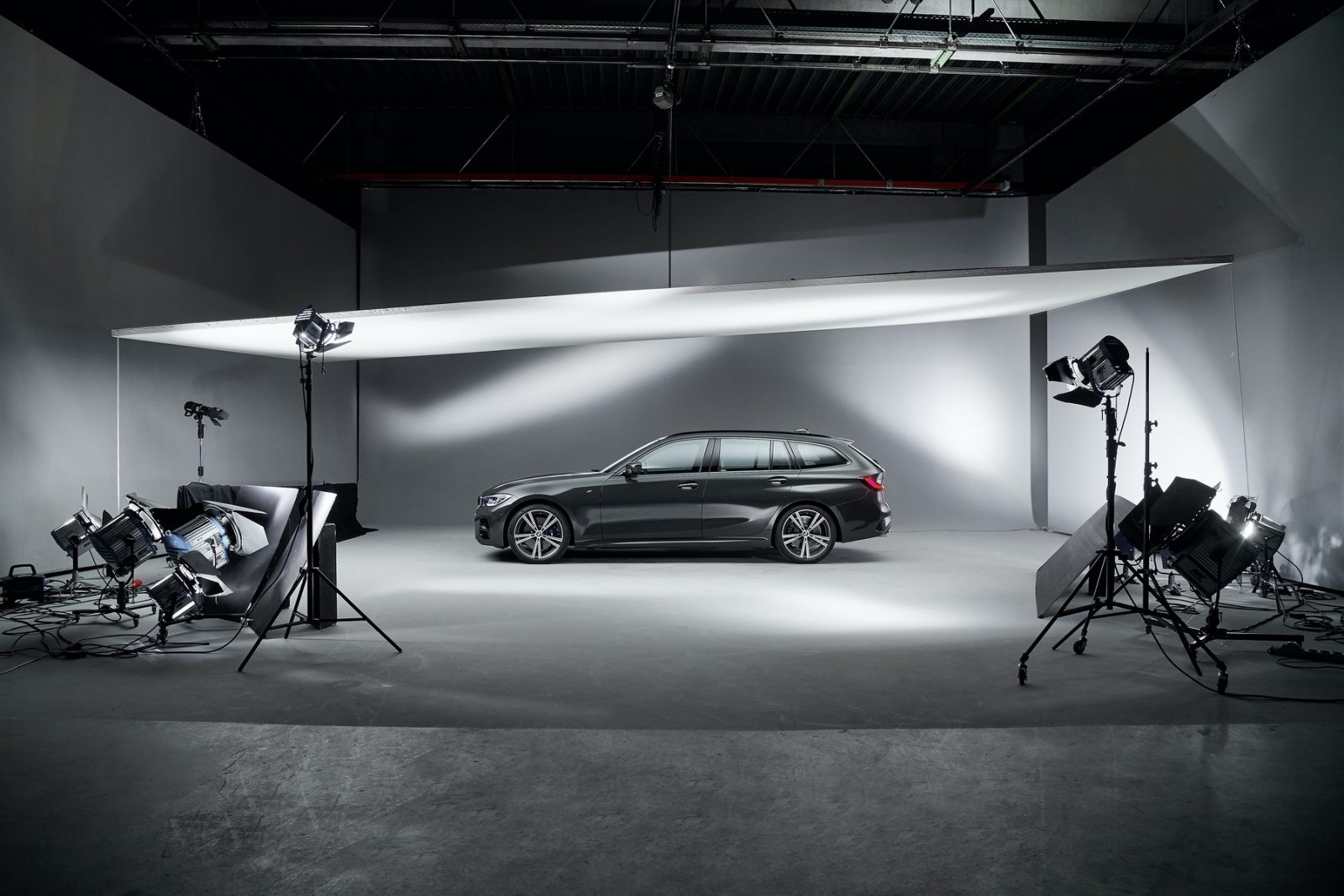 The latest generation of the sporty five-door model combines the core attributes of the BMW 3 Series range more convincingly than ever with generous levels of onboard space and an interior that can be used in a variety of ways. The classy and progressive character of the new BMW 3 Series Touring is underscored by the extensively refined premium ambience of its interior and the latest innovations in control/operation and connectivity.

32 years ago the BMW 3 Series Touring blazed a trail for a new breed of car. Now, in its sixth generation, it sets the benchmark for sporting ability and cutting-edge versatility in the premium midsize class. More than 1.7 million examples of the 3 Series Touring have since been built, with the new car’s immediate predecessor alone accounting for over 500,000 of these. The new BMW 3 Series Touring will be unveiled to the public for the first time on 25 – 27 June 2019 as part of the new BMW Group #NEXTGen event at BMW Welt in Munich. It will be produced at BMW Plant Munich for customers in Europe, Japan, South Korea, Taiwan, Hong Kong, Australia and New Zealand. The market launch will get underway on 28 September 2019. 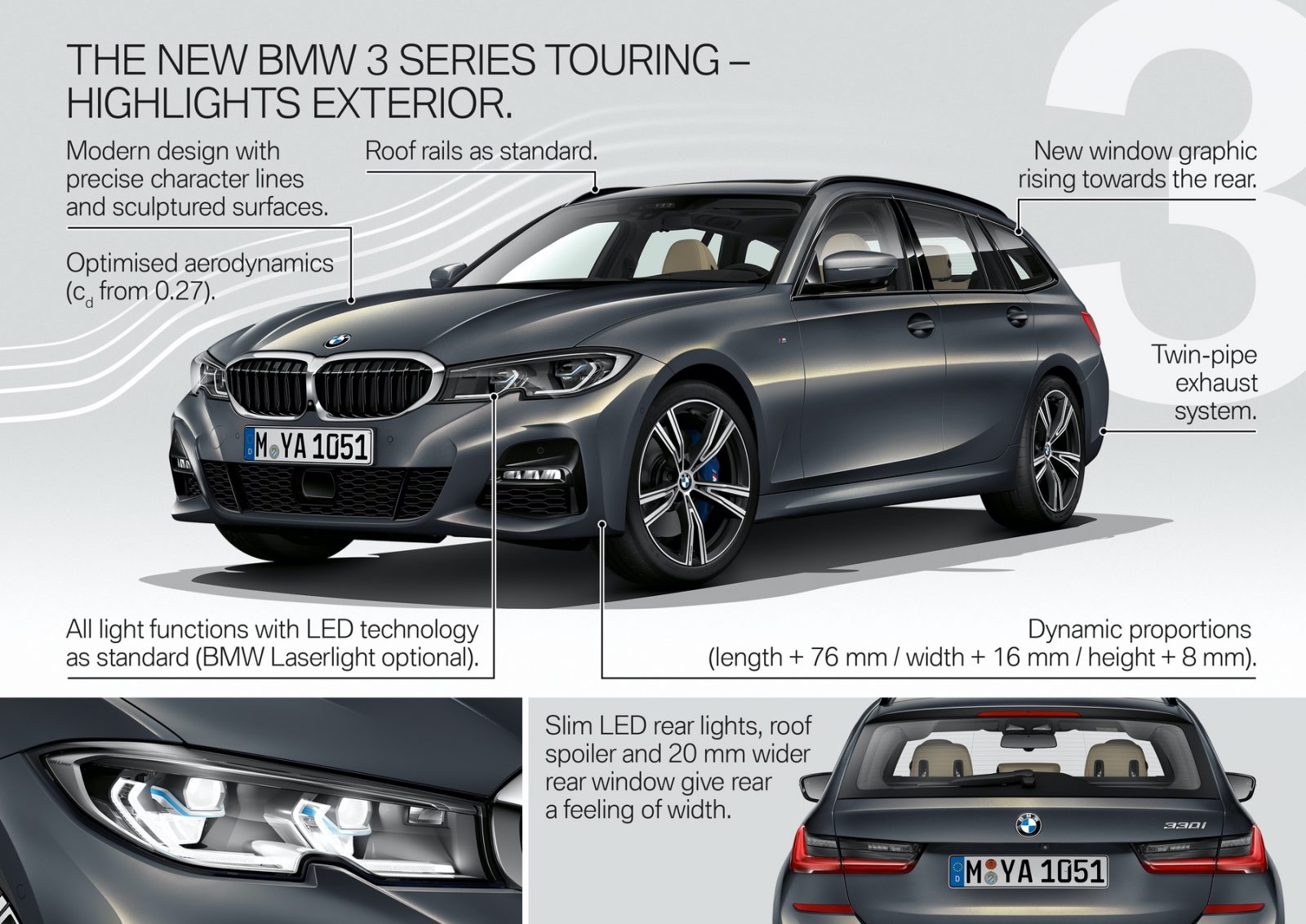 Distinctive proportions and a design language defined by crisp lines and strikingly contoured surfaces ensure the exterior of the new BMW 3 Series Touring cuts a dynamic figure exuding visual impact and muscularity. Its exterior dimensions have grown compared to its predecessor by 76 millimetres to 4,709 millimetres in length, by 16 mm to 1,827 mm in width and by 8 mm to 1,470 mm in height (incl. roof fin). A wheelbase extended by 41 mm to 2,851 mm and wide tracks contribute to the car’s poised and agile handling. 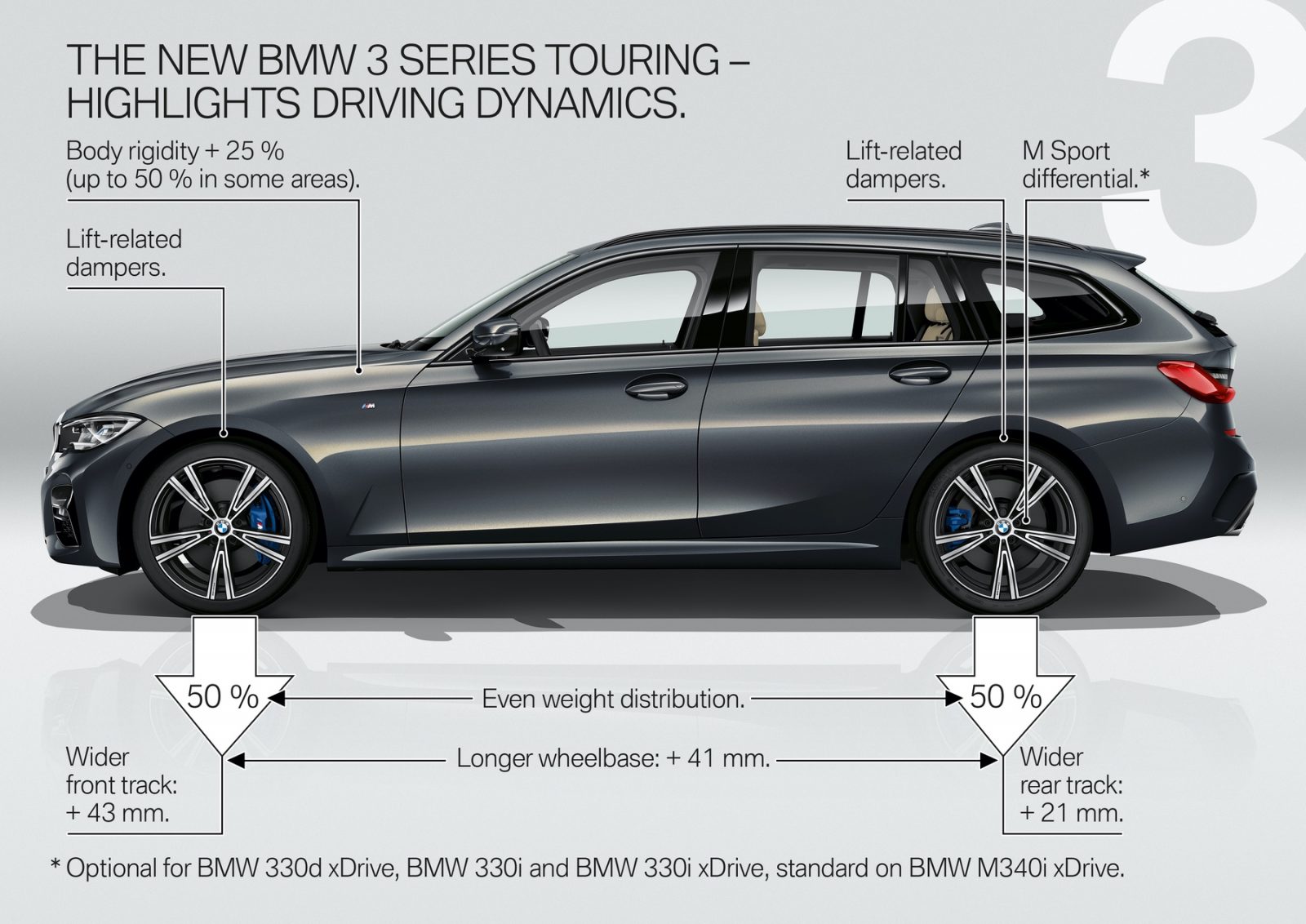 As on the new BMW 3 Series Sedan, the design of the front end – with its large BMW kidney grille, slim twin headlights and an elaborately jutting front apron – accentuates the car’s powerful stance. This familiar look is further emphasised by an eye-catching notch rising up into the headlight unit contour and air intakes in a horizontal T shape (on cars with standard specification and on Sport Line / Luxury Line models). Full-LED headlights are fitted as standard on the new BMW 3 Series Touring, while LED headlights with extended features, Adaptive LED headlights with BMW Laserlight for non-dazzling high beam with a range of around 530 metres and LED front foglamps are available as options.

The interplay of roofline and side window graphic brings a particularly dynamic flavour to the familiar BMW Touring silhouette. A powerfully formed and clearly defined shoulder area, a character line climbing from the front side panel to the rear end and the Hofmeister kink (the familiar counter-swing at the trailing edge of the side window graphic) exude sporting presence and forward-surging intent. And the car’s feeling of class is heightened by the standard roof rails and aluminium trim for the B‑and C-pillars, plus aluminium strips for the sealing around the side windows. The flanks trace a flowing path into the tail, where a pronounced spoiler lip, the LED rear light units (with darker upper sections) and twin exhaust tailpipes for all model variants add further dynamic emphasis. 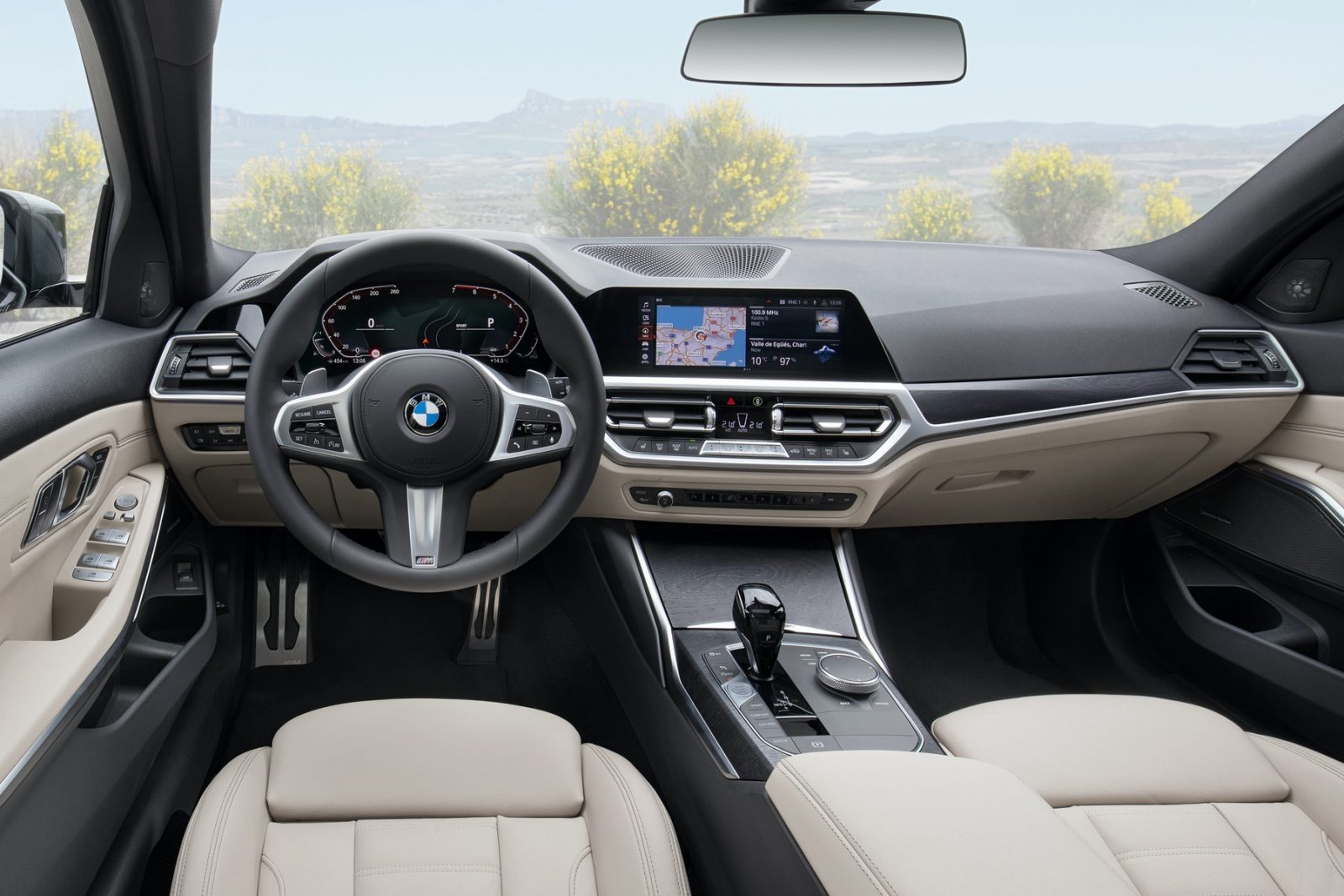 The driver-focused cockpit design, new display grouping of Control Display and instrument cluster, and controls concentrated into a small number of function panels bring a sporting aura to the interior of the new BMW 3 Series Touring. Standard specification includes a newly designed sports leather steering wheel with multifunction buttons, thumb rests and electroplated applications. The high centre console and coordinated design of the door trim panels and instrument panel create a cocooning feel. At the same time, the instrument panel – exuding modernity and lightness – comes together with horizontal lines, discreet electroplated strips and other stylish details to showcase the spaciousness and premium ambience of the interior.

Newly designed seats enhance comfort levels over long distances in the new BMW 3 Series Touring. Shoulder room in the front of the cabin has grown particularly significantly, and the new car offers more headroom than its predecessor in all seats. The rear compartment, meanwhile, greets passengers with extra legroom and greater ease of entry and exit. The rear seat bench accommodates three child seats, of which two can be fixed in place with ISOFIX attachment points. 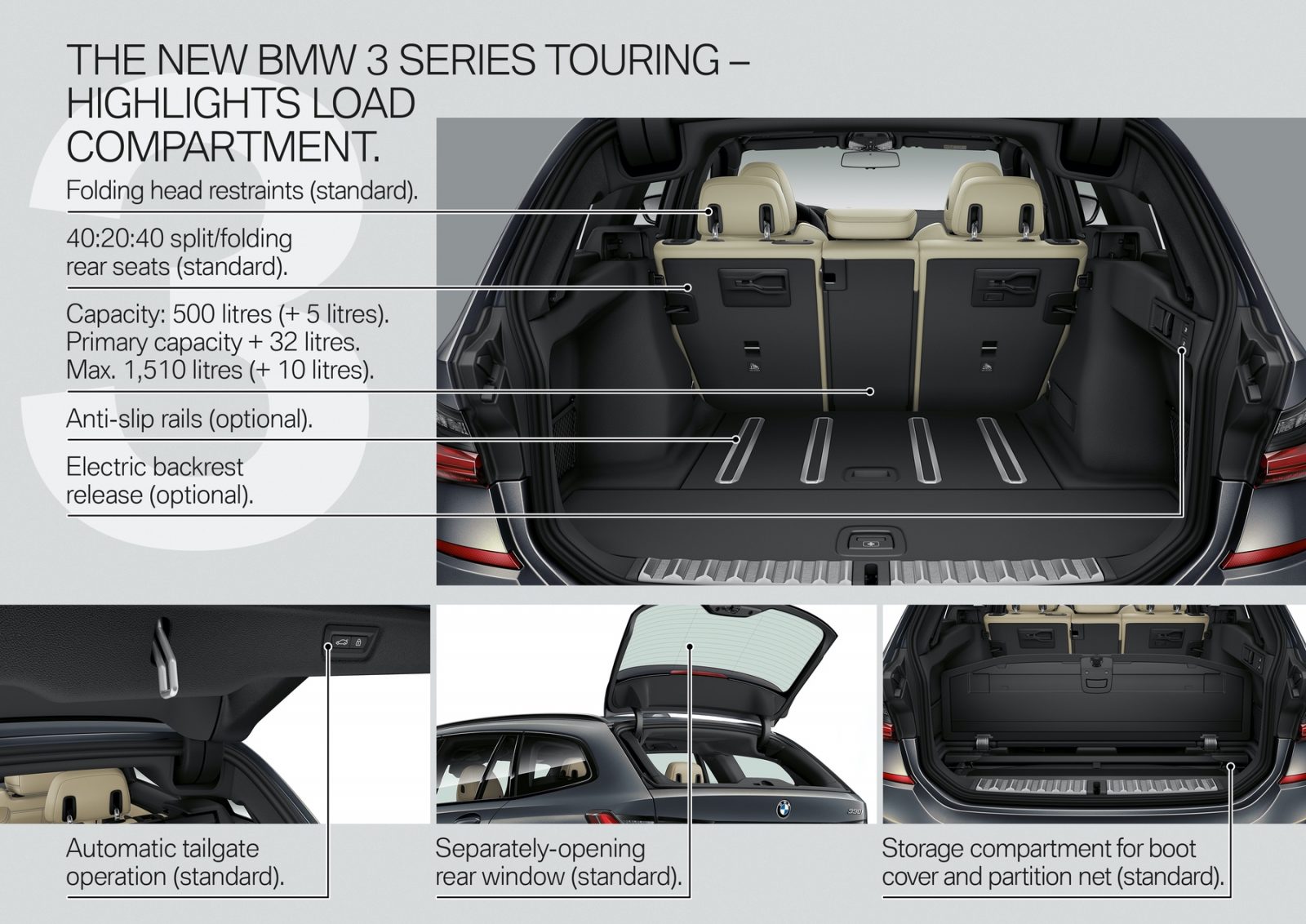 The new BMW 3 Series Touring comes as standard with automatic tailgate operation. The Comfort Access option allows hands-free opening and closing, too. The rear window opens separately, as will be familiar to BMW customers, and its aperture is 20 millimetres wider than on the outgoing model. Packing in large and heavy items of luggage will now be easier thanks to a load compartment that is up to 112 millimetres wider, a 30-millimetre higher loading aperture that is up to 125 mm wider in its upper section, a slightly lower loading sill (at 616 mm) and a reduction in height in the step between it and the boot floor from 35 mm to 8 mm. There is the additional option of a trailer coupling that extends and retracts again electrically.

The new BMW 3 Series Touring’s boot can hold 500 litres of gear – five litres more than its predecessor – when all the seats are occupied, and directly usable primary load capacity is up by 32 litres. Load capacity can be increased to a maximum of 1,510 litres by flipping down the sections of the 40 : 20 : 40 split-folding rear backrest. The backrest elements can also be released from the boot at the push of a button as an option. The corresponding array of buttons can be found in a newly designed control panel on the right side of the boot. The luggage compartment cover and the boot partition net can be transported in specially designed compartments underneath the boot floor. The optional anti-slip rails integrated into the boot floor, meanwhile, are a new feature not found on any of the new BMW 3 Series Touring’s competitors. The rails automatically extend when the tailgate is closed and prevent cargo from sliding around during the journey. 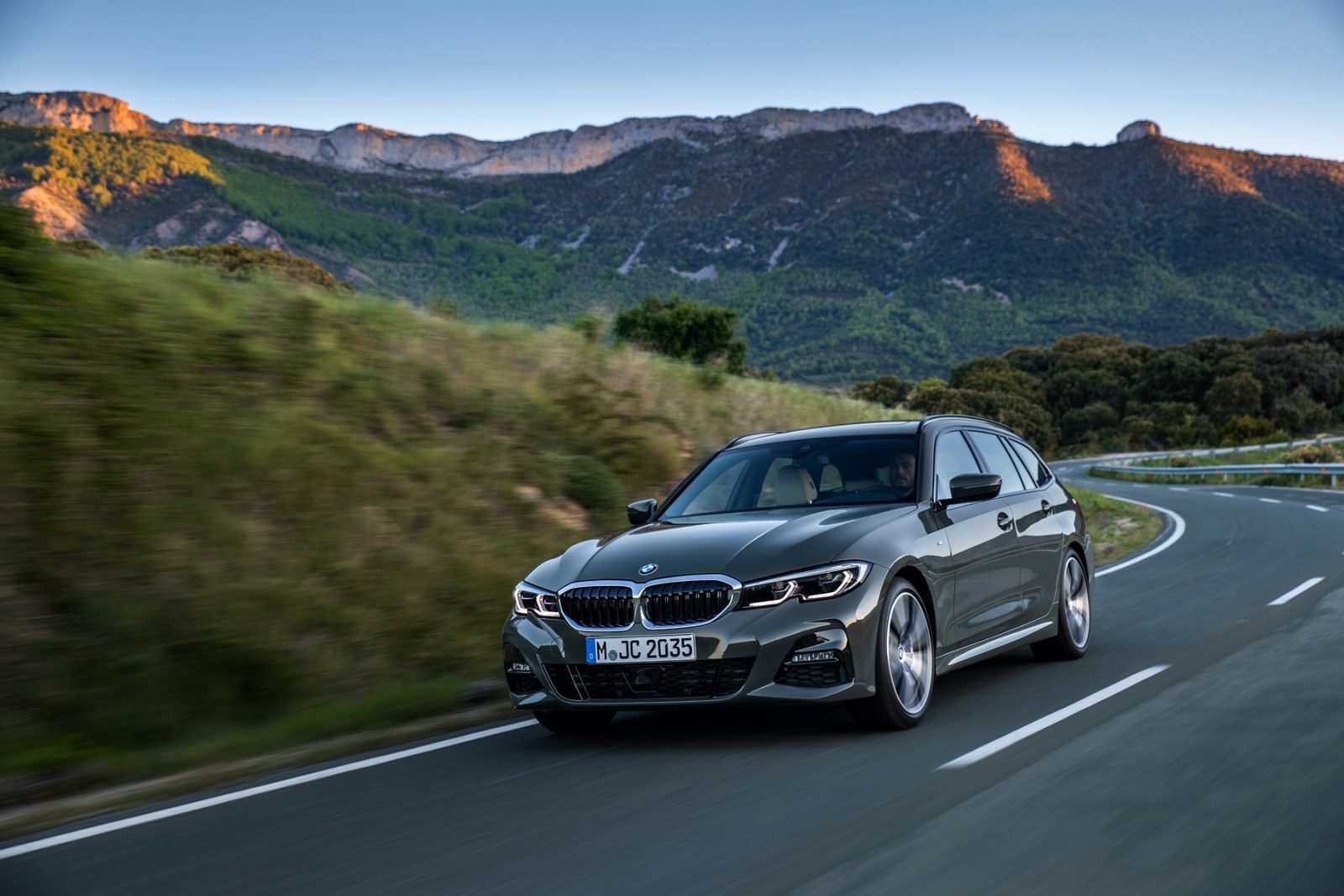 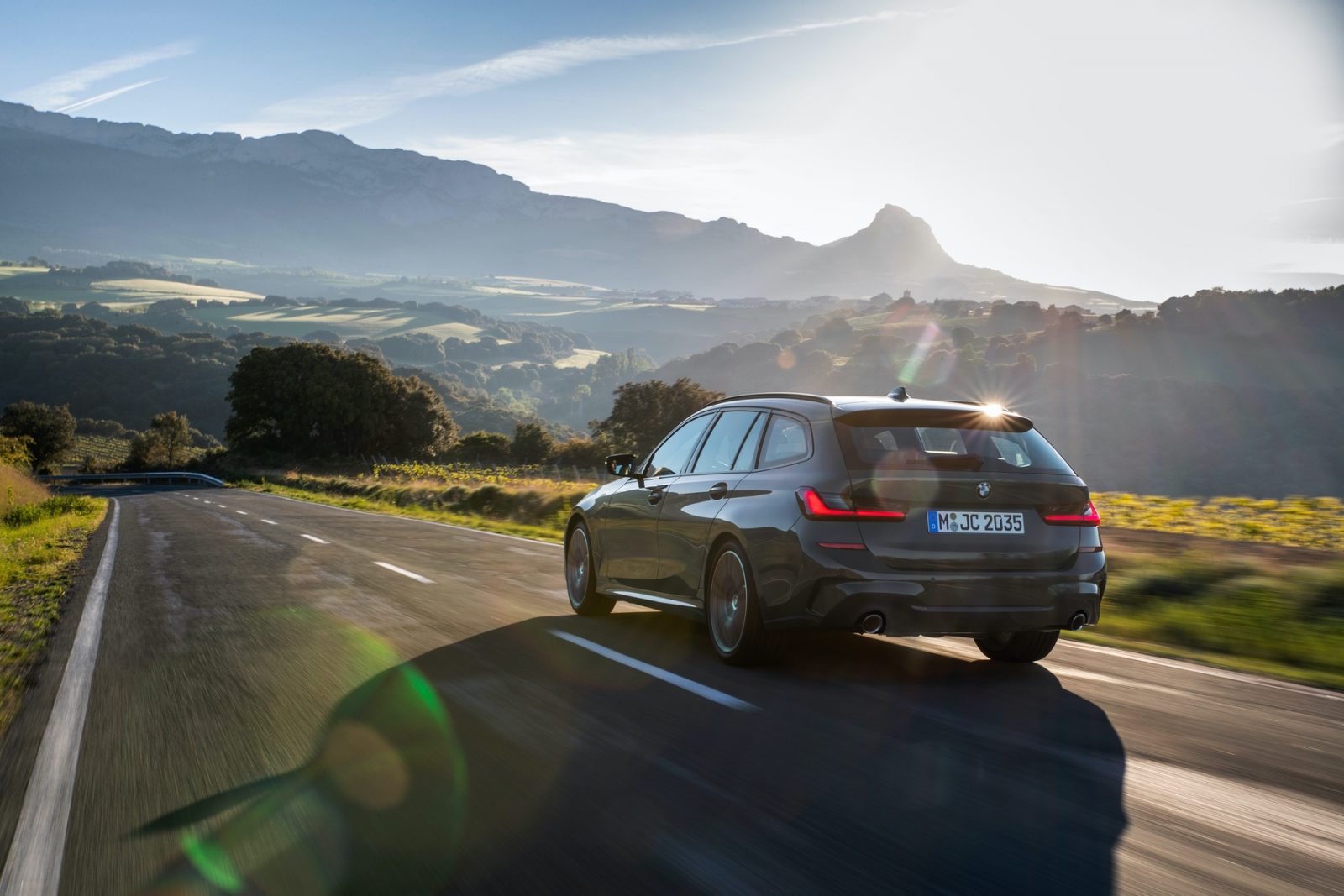 A noticeable increase in agility over the outgoing model, exceptionally precise handling and a persuasively comfortable ride even over long distances are the result of a rigorously driving-pleasure-led development process for the body structure and chassis technology. The rigidity of the new BMW 3 Series Touring’s body has been increased by around 25 per cent overall and by up to 50 per cent in some areas. The chassis mountings are also significantly stiffer than on the predecessor model. Plus, the new BMW 3 Series Touring has a low centre of gravity and 50 : 50 weight distribution. Despite its increased exterior dimensions, myriad additions to its standard equipment, increased stiffness and optimised acoustic properties, it is up to 10 kilograms lighter, model-on-model, than the outgoing car. Optimised aerodynamics cut its drag coefficient to as low as 0.27 (BMW 320d Touring).

Lift-related dampers – which are part of the standard suspension technology and optional M Sport suspension – are key to creating a balance between sportiness and ride comfort no rival can match. They are continuously variable and adjust the damper firmness progressively according to the changing spring travel, which allows them to reduce body movement perceptibly when ironing out vibrations caused by bumpy road surfaces or dynamic cornering.

As well as M Sport suspension with a 10-millimetre drop in ride height, customers can also specify Adaptive M suspension with electronically controlled dampers. The two optional suspension variants each link up with variable sport steering. And M Sport brakes with four-piston fixed callipers at the front axle are also available. The blue-painted callipers carry the M logo. Standard specification for the new BMW M340i xDrive Touring also includes an M Sport differential, which is available as an option (in conjunction with M Sport suspension or Adaptive M suspension) for the BMW 330i Touring, BMW 330i xDrive Touring and BMW 330d Touring. The electronically controlled, fully variable locking function in the rear differential helps to significantly enhance traction, agility, stability and cornering prowess. 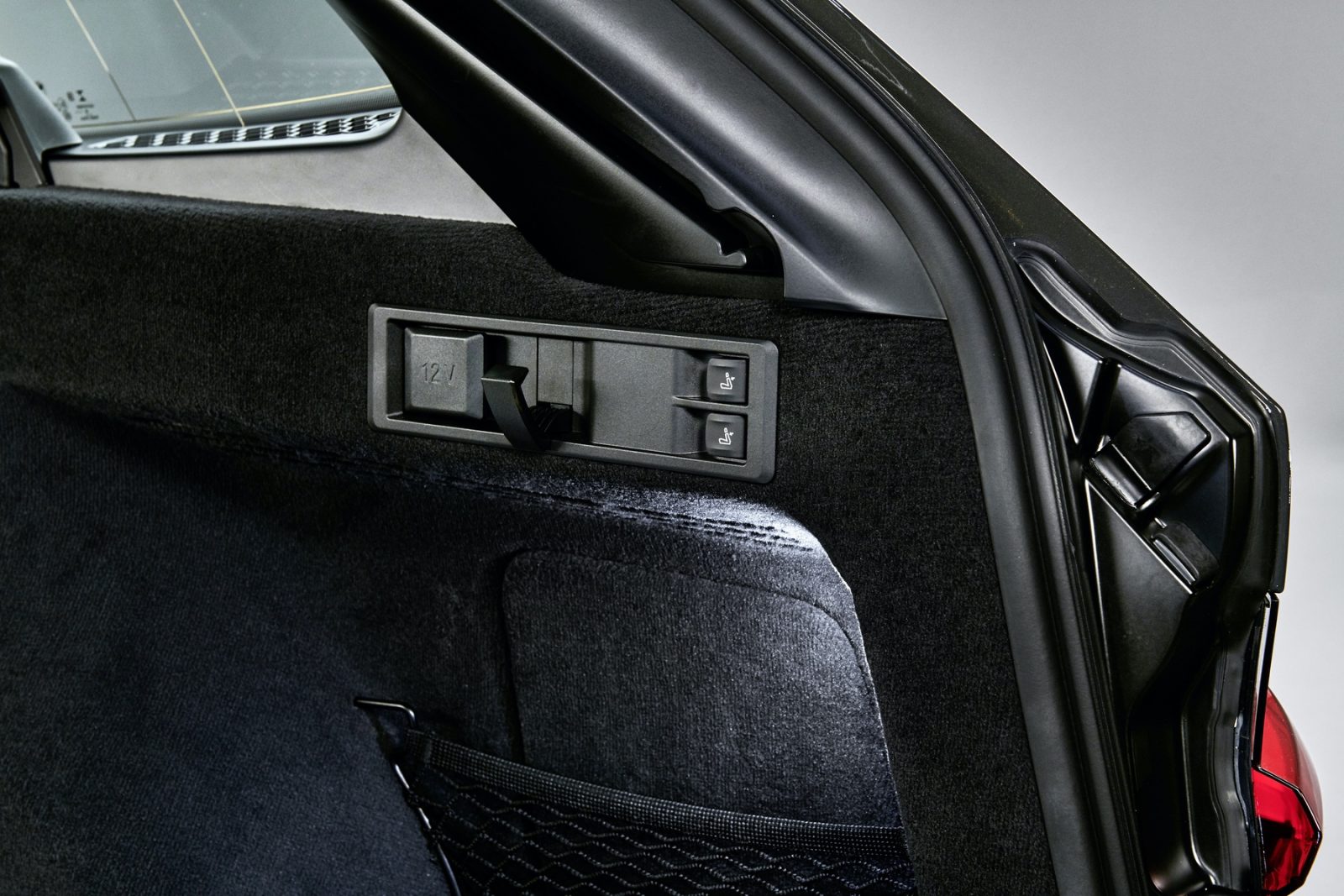 The Advantage, Sport Line, Luxury Line and M Sport variants of the new BMW 3 Series Touring enable specific individualisation of its design and appointments. And an array of high-quality comfort-enhancing options are also available. Newly designed steering wheels and interior trim strips, the optional Vernasca leather trim and BMW Individual Merino leather trim, a Sensatec instrument panel and a leather-covered BMW Individual instrument panel bring an exclusive sense of style to the interior. Also on the options list are a panoramic glass roof, three-zone automatic climate control, auxiliary heating, a Harman Kardon Surround Sound System, ambient lighting and telephony with wireless charging. Acoustic glass comes as standard for the windscreen and is offered as an option for the doors.

New progress along the road to automated driving.

The innovative assistance systems on board the new BMW 3 Series Touring represent the latest steps towards automated driving. Standard features include the Speed Limit Info system with No Passing Info display, Lane Departure Warning, and Collision and Pedestrian Warning with City Braking function, which also detects cyclists. Options include Active Cruise Control with Stop & Go function and the Driving Assistant with Lane Change Warning, rear collision warning and crossing traffic warning. Also offered is the Driving Assistant Professional, a complete comfort and safety-enhancing package. One of the features of the Driving Assistant Professional is the steering and lane control assistant, which works together with the driver to help keep the vehicle in the detected lane, even through narrow channels, and also includes the lane keeping assistant with active side collision protection and the Evasion Assistant. The new-generation BMW Head-Up Display offers a larger projection surface, new graphics and additional display content. 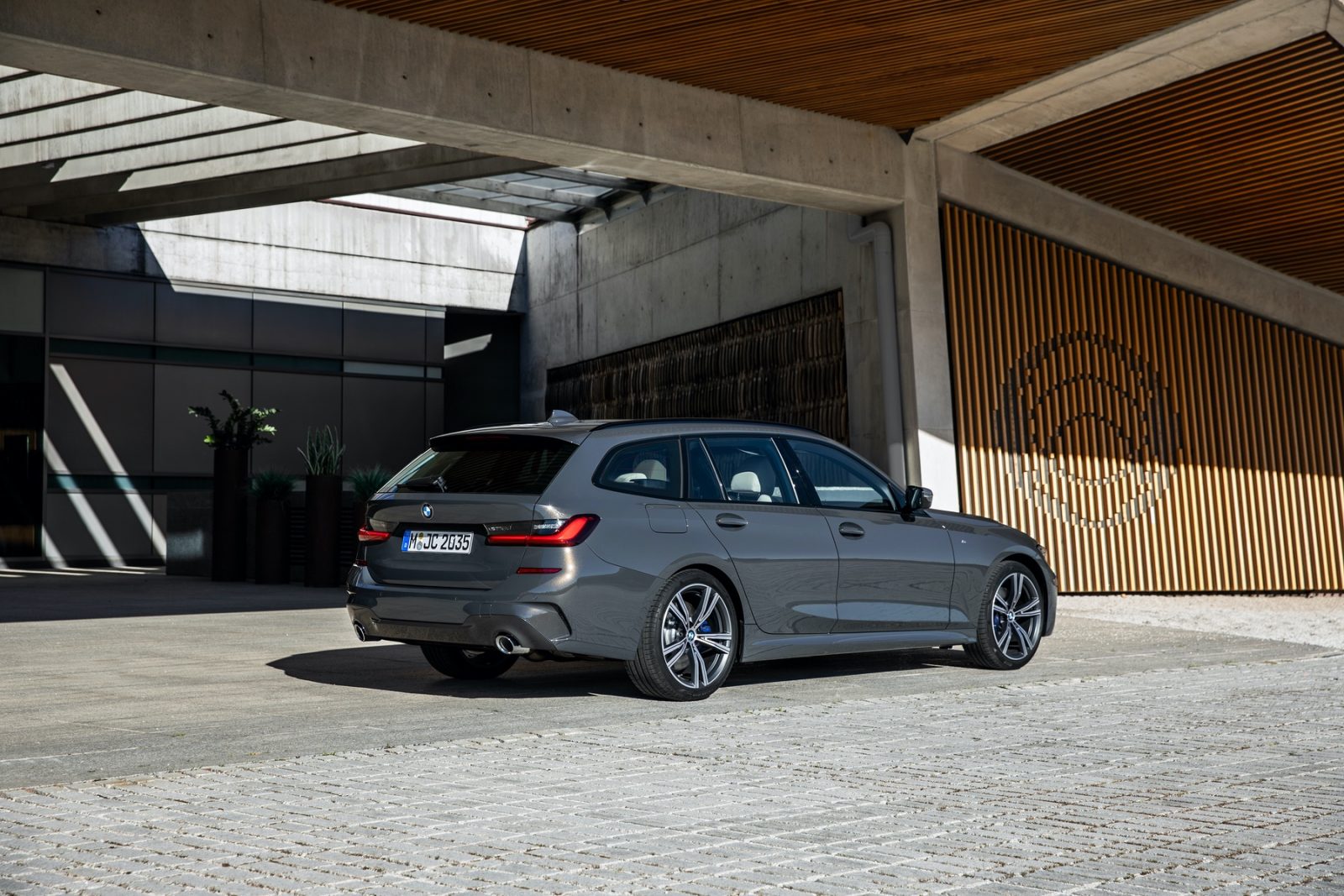 Park Distance Control and the rear view camera assist the driver with parking and manoeuvring. Also available is the Parking Assistant, which takes over steering, acceleration, braking and gear changes via the Steptronic transmission when driving into and out of a space. Its range of functions additionally includes the reversing assistant, which makes light work of backing up over distances of up to 50 metres by steering the vehicle along the same path it took when moving forward.

The new BMW Operating System 7.0 plays a leading role in optimising the control and display system with modern, digital functions geared precisely to the needs of the driver. The optional BMW Live Cockpit Professional comprises consistently designed, situation-linked and customisable displays on the fully-digital 12.3-inch instrument cluster and 10.25-inch Control Display. For intuitive operation, the driver can choose from the Control Display’s touchscreen functionality, the iDrive Controller, the steering wheel buttons, voice control and gesture control. 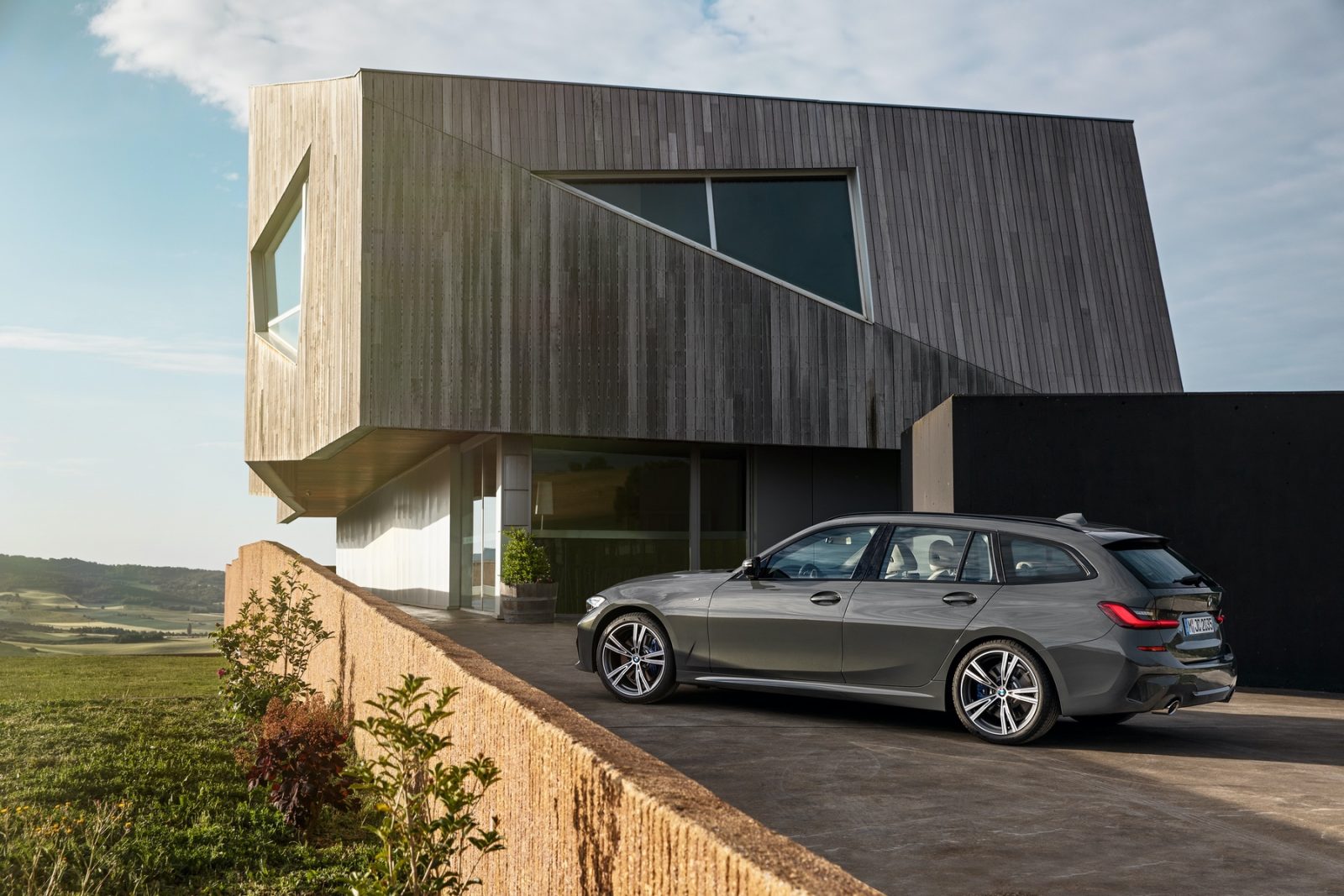 Another element of BMW Live Cockpit Professional is the BMW Intelligent Personal Assistant, an intelligent, digital character that responds to the prompt “Hey BMW”. The arrival of the BMW Intelligent Personal Assistant ensures there is always a genuine BMW professional on board. He is able to explain all sorts of different functions (“How does the High Beam Assistant work?”), provide current status information (“Is the oil level okay?”) and help answer questions (“What warning messages do I have?”). He is the ideal co-driver and comes in particularly useful during everyday driving by responding to natural voice commands to help the driver with numerous tasks, such as enhancing productivity and on-board entertainment. The range of functions and skills available are constantly expanded as part of regular updates, which can be carried out seamlessly on a smartphone and in-car by Remote Software Upgrade.

Worldwide BMW Sales Up 12% for October