Updated: The M3 and M4 have been confirmed to use Active Sound.

Buried in the press release earlier this week was this nugget about the new M3 and M4’s sound:

An engine sound in keeping with the motor sport-level performance of the BMW M3 and BMW M4 is provided by an innovative flap arrangement in the twin-pipe exhaust system. The electrically controlled flaps just before the rear silencer minimise exhaust back-pressure and produce a BMW M sound which is striking and unmistakable over the entire engine speed range, as well as giving precise feedback on engine load. 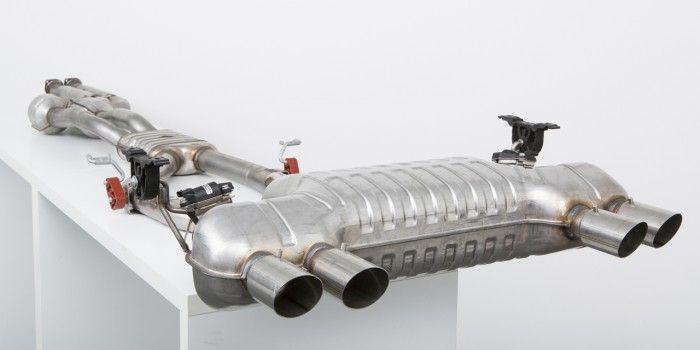 With this solution clearly BMW has been working on making turbocharged M engines sound, well more like M engines. The company’s first solution was to employ what they call “ActiveSound” on the M5 and M6 to enhance the noise inside the cabin. The obvious issue with that is that it’s not really related to the actual noise the engine is producing. Sure it sounds great but in reality it’s mimicking what the engine could sound like in the cabin.

Will the new M3 and M4 follow this? Some sources have been telling us that the M3 and M4 will eschewed this philosophy. Others are less optimistic and are expecting the cars to use the same system found the in M5/M6.

Knowing that the M3 and M4 needed to be more pure M cars engineers have clearly worked hard to develop ways for the drivetrain to be both quiet and raucous at the same time. Furthermore the 3/4 series chassis is less isolated than the 5/6 and thus allows more of that noise into the cabin.

We should have clarification soon. Either way M has worked hard to make these cars feel and sound emotional.

The Next Generation F15 X5M Debuts at the \’Ring