What in God’s name was I thinking? I had sworn off E36s almost ten years ago when I limped my last one into a dealer as a trade-in. And now here I was, smitten by an Arctic Silver 1998 328i. But let’s back up. Recently I found myself in a bit of a conundrum. For one glorious year I had MINIUSA’s JCW Roadster for my daily driver, and the time had finally come to return to sender.

My 535i wagon has been turned into a kid-mobile (sad right?) and my 1M isn’t about to do winter in Chicago. I needed a driver that I could both be proud of and not have to worry about. 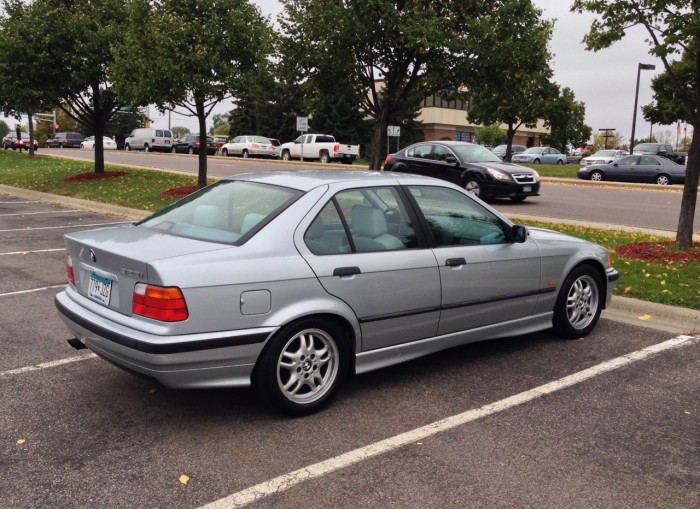 So began the hunt. Of course my first inclination was to look for used E30s. However with the popularity of E30s rising it’s becoming increasingly hard to find a good, unmolested example that felt like a good buy. And rust being what it is in the midwest, finding an E30 that hadn’t turned mostly to dust wasn’t easy. So I decided to broaden the search a bit and (gasp) enter the 90s.

However looking at used E36s allows me a chance to re-examine the car. Was the E36 a car caught between two time periods and thus lacked the upside of either? Or was it a magic neutral ground that BMW achieved that split the difference between enthusiasts and the mass market that we’re only now able to see? 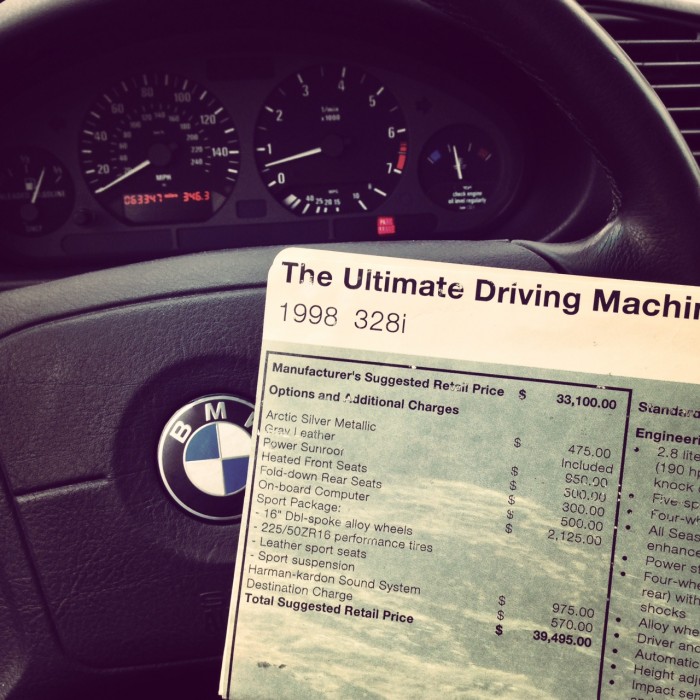 The E36 is small and boxy. Fresh out of a brand new F30 328i that’s the first thought in my head as I walk towards my soon to be 1998 328i. The car in question has 63,000 miles and I just agreed to buy it for $6k. It’s a fantastic example of a used car: one owner, 100% dealer serviced, all records kept and not a single modification. No rust, light patina and, as I was soon to find out via an epic seven hour road trip, a strong runner.

After a quick stop at the renowned Wedge Co-op for some of the finer energy bars and coffee money can buy, I set out for Milwaukee where the plan was to rest for the night. Driving in country I was unfamiliar with in a car that I had never seen in person before made for a bit of a sensory overload. But the 328i quickly felt like an old friend. This was the fourth E36 I’ve exchanged money for in my life. And after #3 I had sworn to never buy another. Poor interior quality and engine components that seem to have been engineered towards cost rather than longevity made my previous experiences a bit lackluster. But this was a 1998. The last year the E36 was made. They had to have gotten right, right? 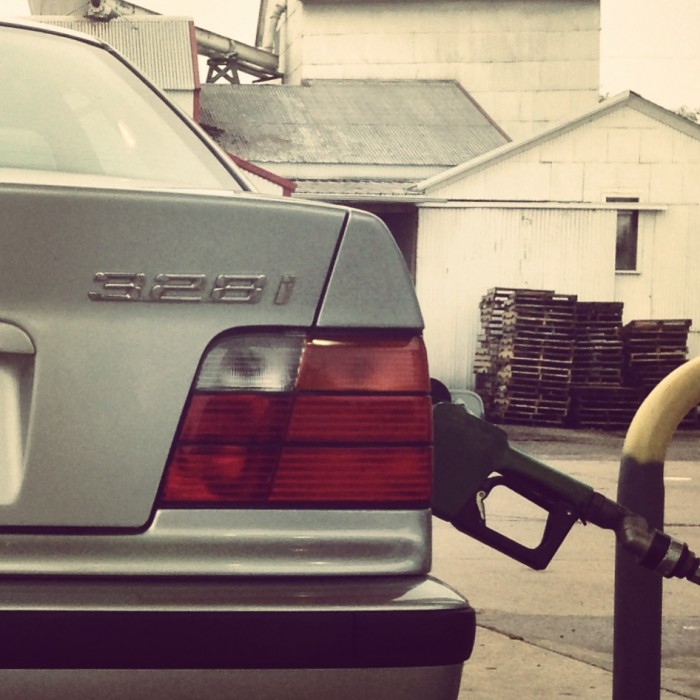 That would appear to be the case. As the miles clicked by I re-familiarized myself with the best small sedan of the 90’s. The steering was always great on the E36. Some have called the E36 M3’s the best BMW ever produced. In terms of purity I would have to agree. My 328i Sport lacks some precision of the M3 but the feel is all there. The amount of feedback coming through the wheel makes the simple act of driving so much more involving than a modern car. The linear quality of the resistance and the satisfaction you get hustling from corner to corner (even in a relaxed manner) could warm the darkest heart. This is what I miss in modern BMW’s most of all. Driving at 5/10s and feeling like your really driving.

Compared to a current BMW there is a bit of waft in the motion and reactions feel relaxed. This was the most sport oriented 3 Series of its time (M3 aside) and yet it could only manage 0-60 in around 7 seconds. Very respectable in the 90’s, less so in 2013. It’s swift rather than quick. But this is a car that rewards the more it’s driven well and pushed. The M52B28 inline six pours out 190 hp at 5,300 rpm with torque peaking at 206 ft lb around 4,000 rpm and continues strong all the way up to its 6,500 redline.

The E36 is visibly more compact than the the current 3 Series the F30. Yet the cars aren’t that different in size. The E36’s wheelbase is 106.3 in, just over four inches shorter than the current F30. It’s length where the 3 Series has really grown with the F30 almost eight inches longer. Width is also up with the F30 being almost a full four inches wider than the E36 – something you feel both inside and while dicing through rush-hour.

However the biggest change has to be the weight. The E36 weighs only 3,100 lbs compared to the 3,494 lbs despite liberal use of weight saving materials. Think of it this way, the E36 is equivalent to a MINI Countryman.

Designed by Joji Nagashima, the E36 blended some more vintage elements of BMW’s past design language with a look that was decidedly more modern in a late 80’s and 90’s sense. For many it aged quickly and hasn’t held up as well as the effortlessly attractive E39 that Joji Nagashima also designed (not to mention the E30 designed by Claus Luthe and his team). However as tastes are changing and modern cars are becoming more and more derivatives of each other, the E36 is starting to become attractive to this eyes at best and at the very least distinctive. 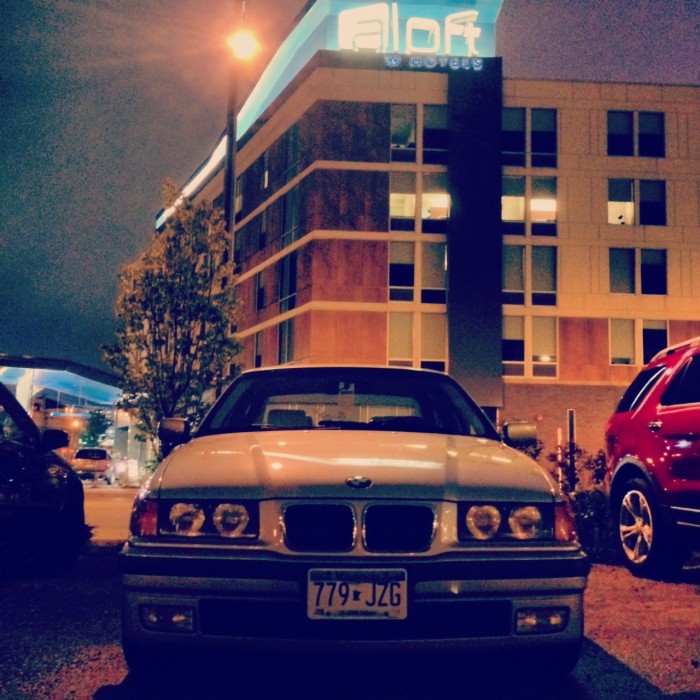 As I pulled into Milwaukee and our stop for the night it occurred to me how relaxed I was. The E36 not only looks smaller than a modern 3 Series but feels smaller inside. Yet there’s plenty of room for my 6’2″ frame and, despite the fixed wheel, the seating and position of the controls are excellent. Perhaps more than any other BMW I can think of, the interior, instrumentation and controls, are wrapped tightly around the driver.

The next morning was spent exploring a bit more of Wisconsin before heading south and into Chicago. As you’d expect the E36 never missed a beat. After 500 miles I could start to sense a few areas that may need to be addressed. The right rear shock feels a little soft and the front brakes may only have another six months left. But all told, as a used car, this E36 was every bit as good as I could have imagined.

It didn’t take me long to forget past E36 transgressions. After two days behind the wheel I’ve fallen in love with this simple and honest BMW. The mechanical quality of the controls and the simplicity of the experience are such a refreshing change of pace to everything that’s been in my driveway recently. And with only 60,000 clicks on the odometer, hopefully this is just the beginning of a long and rewarding relationship.

The “Face“ of the BMW 3 Series Through the Years

BMW Launches Motorsport Parts for the US Market