A few months back we sampled the supposed intelligent enthusiasts X1 in both writing and video reviews. A rear wheel drive “sDrive” M sport 28i. In short we loved it. In fact if it wasn’t for the electrically boosted steering feel we’d have a hard time faulting any of it. The price, performance and utility frankly embarrassed BMW’s own newly released 3 Series wagon and GT. In a sense what we had was a E91 wagon (in size and feel) with a vastly updated drivetrain and refreshed electronics. It was made all the more impressive by the fact it retails for thousands less than the E91 even 2-3 years ago.

But what about that steering? BMW would have liked to find a way to fit the electrically assisted rack on all X1s (as it helped squeeze out some extra efficiency) but the xDrive system wouldn’t offer the space required. Thus we have one of the best kept secrets of the BMW range – the X1 28i with xDrive, the 8 Speed ZF automatic and old school E90 era mechanically boosted steering. For those curious, yes the X1 35i xDrive has the same steering but inexplicably makes due with the now antiquated 6 speed ZF auto which blunts both performance and efficiency more than you’d expect.

We figured there was no better way to test the sweet spot of the X1 range than to take it with us to Road America on our 5th 24 Hours of LeMons race. Packed with spare parts, tools, luggage and plenty of beer we headed north to the mecca of North America motorsports.

Our race ended a prematurely on the 2nd day (when we were hit by an overly eager Acura driver at Canada Corner) but it was another amazing experience that we’ll hopefully repeat again.

The X1 served as our pit vehicle getting us from one corner of the four mile track to the next. It also got us into town and over to the Paddock Club for important after race meals and to the local auto parts store for the random things that only a 1986 Toyota MR2 could need. Through it all the X1 won us all over. Where the sDrive lacked that fluidity of feedback found on older BMWs, the xDrive X1 delivered. While it didn’t possess the quicker responses of an M Sport X1 (the only way to get sport suspension) the feedback within the controls and overall handling proved to be enough to make even short drives interesting. 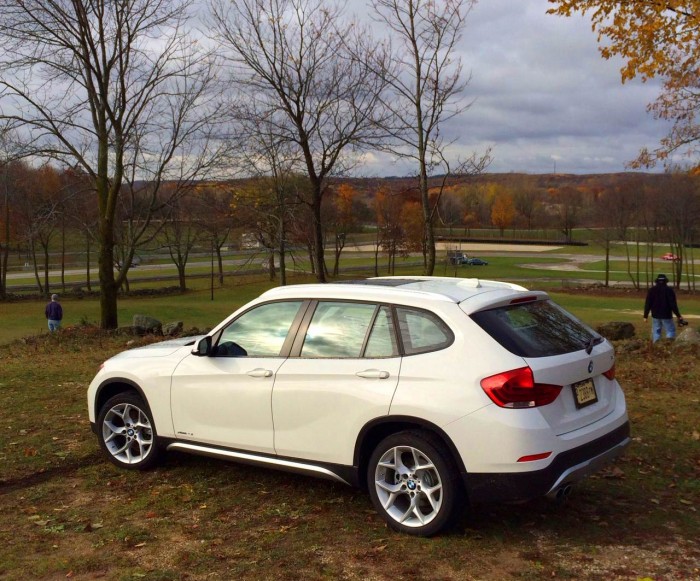 The xDrive system itself played well in light off-roading that we requited throughout the weekend. While a sDrive X1 could have been adequate it was reassuring to know that I could tackle the mud and snow (which fell for about 5 minutes at one point) without the need for much considering let alone winter tires.

Our test car was fitted with the xLine and it’s gorgeous matte wood trim and Brown leather inside and Y-Spoke 18″ wheels and silver trim outside. As much as we’re fans of the M Sport look across the BMW range, the X1 looks better to our eyes in xLine or sLine configurations due to size, trim and wheel design. Despite the cabin being on the lower-end of BMW’s material offerings, the designers did a fantastic job making it feel like a special place with the matte wood and alternating colored pipping on the leather seats. It’s also a bright place with BMW’s now ubiquitous panoramic moonroof (a $1250 option)

As it did in our first test, the X1 managed to surprise us with it’s performance, efficiency and utility wrapped up in an affordable package. In a lineup where the 3-Series wagon (with mandatory xDrive) starts at $42,475 the X1 is priced at value-oriented $31,725 (including destination). Similar size, comparable dynamics and an identical drivetrain for $11,000 less.
We’d expected to find that $11k difference on the road but it simply isn’t there. What is here is one of the most compelling four door wagon-like offerings BMW’s had for years. 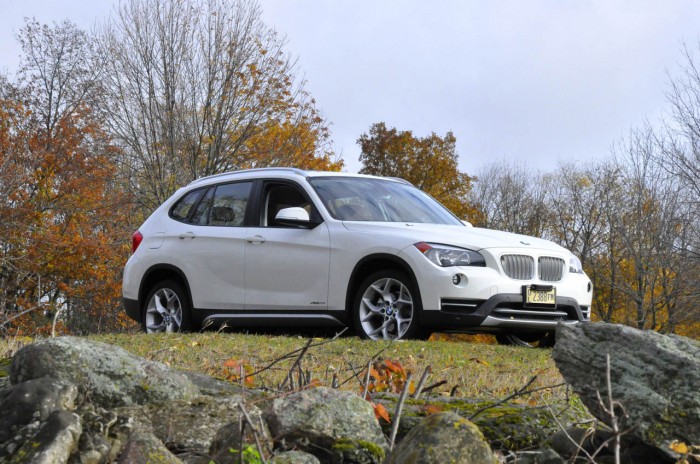 The BMW X1 Testing in the Arctic Circle