An appetizer is meant to jump start taste buds in preparation for the main course- our recent drive of the i3 at one of the many European launch events was not all that different. This past weekend BMW AG gave prospective buyers an opportunity to drive the all new i3. We are one of the over 30,000 that have put in for an i3. What can we say other than we like being early technology adopters and trust BMW to build one hell of a car (no matter what’s under the hood or in the trunk)? What really is surprising is how well the i3 is being received as it is truly unconventional.

The exterior being eye catching, polarizing and futuristic is an understatement- people act like they just saw a UFO when it is silently accelerating down the street. It is quick off the line thanks to all that torque and extremely nimble, but not like you would think from BMW. It is nimble in the sense of maneuverability, its turning radius seems improbable and unbelievable. If you are hunting for a priceless spot to park and just happen to see one on the other side of the street, no worries as the i3 almost turns back on itself and easily can swing around on a street without the slightest need to make the letter “k”. Add in all the gadgetry and it parks itself quickly and accurately. It all makes sense for a vehicle designed for the city; except for one thing-the lack of vision out the back third of the vehicle. The sloping roof and an oddly configured C-Pillar make for a significant blind spot. Maybe with all of the available technology, blind spots are not a concern but it would be even nicer to have some visibility and not to have to rely on some tech to do what your eyes can. The i3 offers optional Driving Assistant Plus that includes a comprehensive range of innovative camera and radar systems that make driving the BMW i3 both safe and comfortable. The Traffic Jam Assist can control the speed and steering of the BMW i3 autonomously up to a speed of 24 mph in heavy traffic or traffic jams. Active Cruise Control maintains a constant speed and distance without driver input. The rear-end collision warning warns of imminent rear-ended accidents and gives you time to react. The BMW i3 can warn of potential front-end collisions and detect pedestrians while using proactive braking it can significantly reduce the risk of collision at both low and high speed. 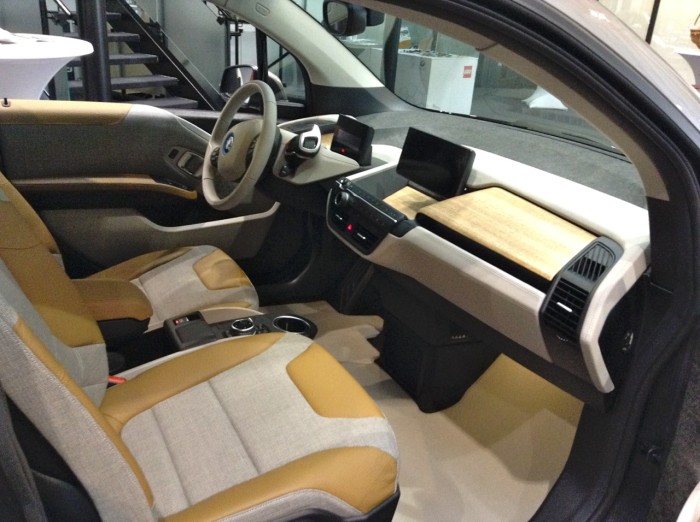 It is quiet and smooth, maybe a little too quiet as all we could ponder is what a dreadful experience it could be a few years down the road when things start to creak and moan as the car gets worn in. It would be a chore to drive with those sounds as there is little else to listen to- well except for the optional Harmon Kardon radio which is a worthy upgrade and may just be an insurance policy to saving sanity. With that said, there were no creaks or rattles- just a well designed and constructed machine with one foot in the land of green and the other in the future. Which is interesting considering the i3 has caught flack from some as it looks cheap (exposed fiber dash and door parts). However, it all feels substantial, looks the eco friendly part, is well thought and assembled. The fabrics, woods and color schemes make the i3 a pleasure to spend time in. It has a nice ambiance that feels warm and natural as opposed to the sterile plastic laden interiors we have grown somewhat accustomed to. Natural tanned leather and use of real wood and wool certainly play a part in how it all works together- it is comfortable and luxurious. 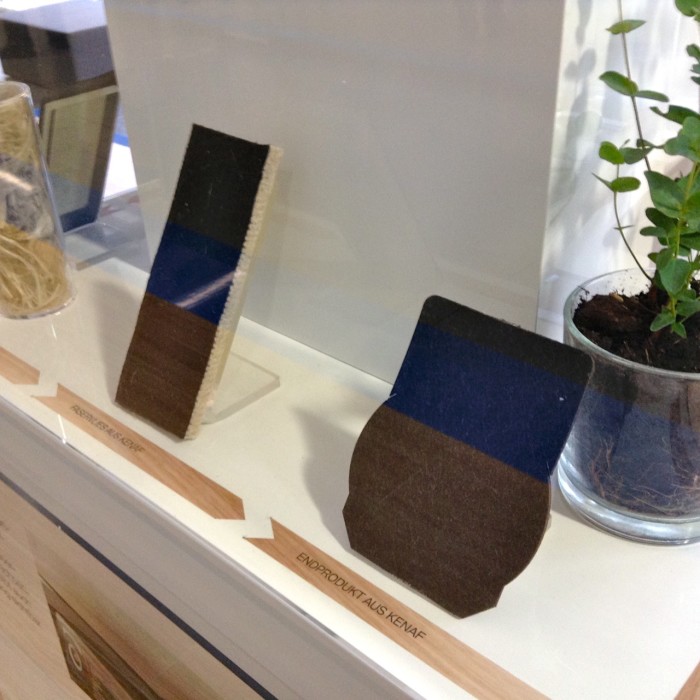 There is one glaring item that seems an afterthought in the interior and no it is not the navigation screen that to many say looks like a glued on iPad. It is the release for the “frunk”. To open the frunk a cover must be pride off, then a wire loop must be located and pulled- it looks cheap and is a hassle (of course our attempts at taking a picture of this failed miserably because of lighting). We get the idea of weight savings and that the frunk is not meant to be used a lot because of the materials used in the hood but the release is crap, plain and simple. Biggest surprise was to see the i3 with 155R19 snow tires, something that surely will be hard to come by at the local tire shop! 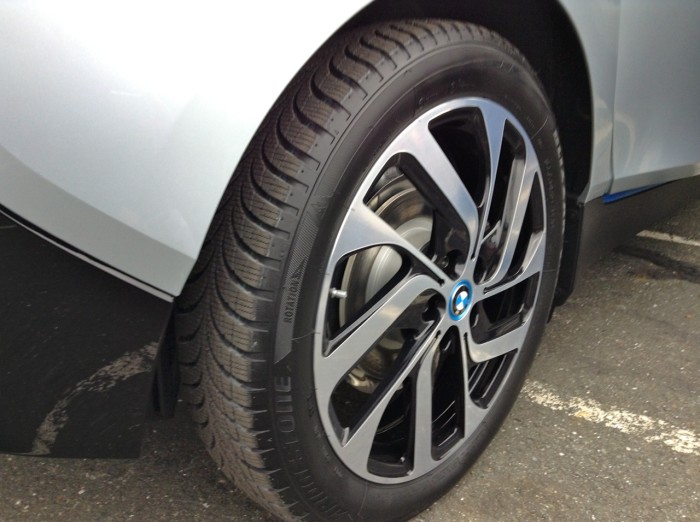 Our quick spin around the block left us wanting more seat time as this vehicle is the the first step to the future and we have only begun to get our feel for the world of electric vehicles. There are a few hurdles to the i3 being parked in our garage in the short term, those being that the range extender and the Wall Box Pro are not available until Spring of 2014… both boxes we would check on the option sheet.

by Gabriel Bridger
i3 Official News

by Gabriel Bridger
BMWi i3 i8 Official News Technology Video