So there was this 135is — dirty in the wrong ways, with all the signs that it hadn’t been taken care of in a proper fashion. Yet there it was, carving up and through the four lane road we were on just west of LA. As I remarked to myself about his lack of respect for the car and inability to apex correctly, I realized I had the perfect tool to teach him a lesson: the BMW i3. While fully electric, the i3 is undeniably quick – especially in the 0-30 range, and despite its upright nature, will corner smartly with a surprising amount of feedback through the steering and the suspension.

I pulled up next to him. I could feel his eye widen as the glow of Solar orange reflected on his once Alpine White 1-Series. The light turned green and I was, gone never to be seen again. 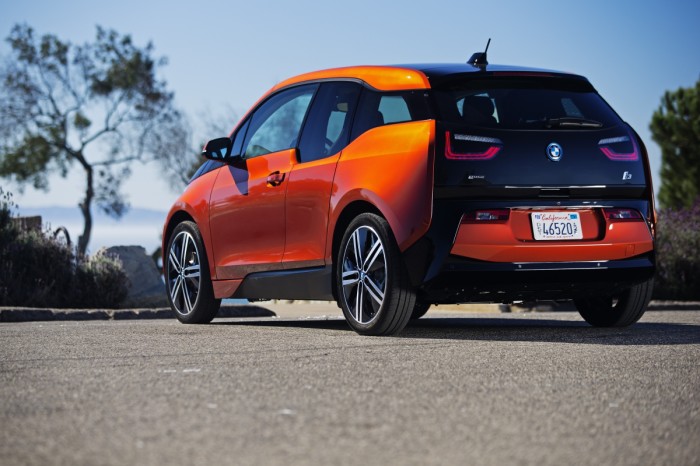 While victorious in that exchange, the i3 is a different kind of ultimate driving machine and one that we have to judge on different terms.

But first, the basics. The i3 is BMW’s first BMWi product and its first 100% electric product meant for mass market sales. With the i3, BMW didn’t just drop an electric engine in an existing platform. Instead they built a car from the ground up out of carbon fiber and aluminum. To produce the car they also created a completely new manufacturing strategy which included building a new, 100% hydroelectric facility to manufacture all that carbon fiber. Furthermore, BMWi designers turned to sustainable materials and processes to make the i3 an environmentally sound vehicle from cradle to grave.

Performance is more than adequate with 0-60 happening in just under 7 seconds. More importantly range is around 80-100 miles with charging (from a 240-volt source ) taking six hours. However with BMW’s optional quick charge station (which you’d theoretically have in your garage) you can charge the batteries up to 80-percent charge in just an hour.

With the i3 and BMWi, BMW has essentially re-thought not only the car itself but the upstream process of building it. 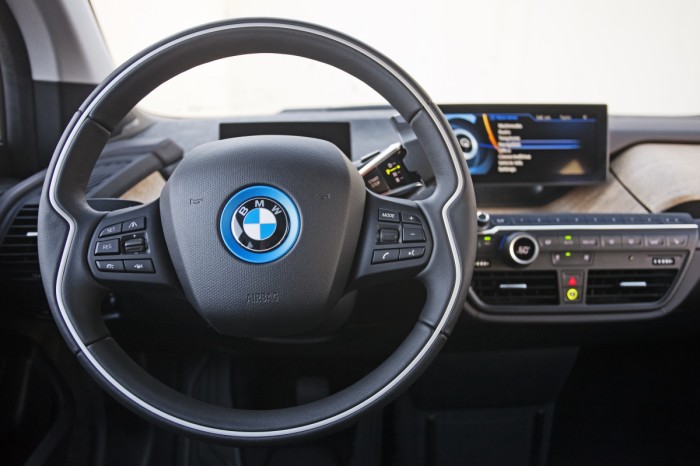 So it was with high expectations that I took my seat inside the i3 and powered it on. The eucalyptus wood accents and strikingly modern design of the dash is one of the first things that tips you off to the level of re-thinking that BMW has done here. The interior is a masterstroke of design and materials. BMWi used pressed hemp on the dash and either wool or leather (with olive extract used for dye) on the seats. Most plastic in the car is made from recycled bottles. Wether you count all of this as smart marketing or an effort to be more earth friendly, it results in an interior space that you want to spend time in.

Not everything is new though. The iDrive controller (which powered the optional 8.8 display with Nav on our tester) is the same one that is found in other BMWs and the software itself is mostly carried over. However the one major added feature is the range spider. Every time you start the i3 the system calculates your range and uses a green overlay on all routes that allow you to get back safely without running out to juice. The system takes into account everything from traffic to topography. In practice it’s a reassuring check every time you get in the car. 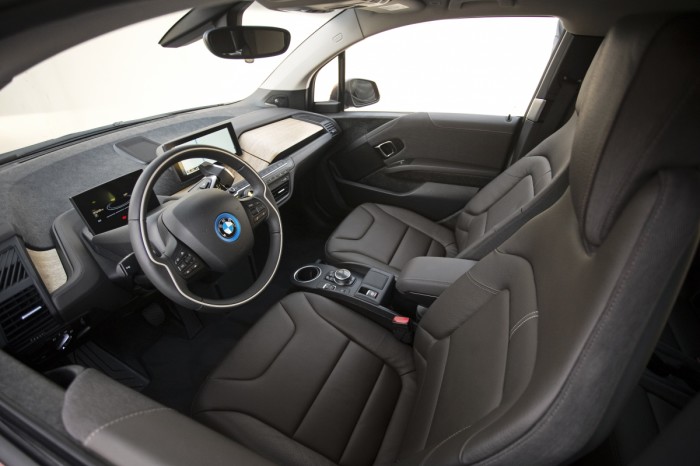 Yet it’s not all perfection in the cabin. The seats have almost zero lateral bolstering and offer very little support during cornering. If you drive like many urbanites do (which is to say, quickly) you will undoubtedly find yourself hanging onto the steering wheel as your only support. I know the design is geared towards an urban use-case that calls for frequent stops. But I still rank this as a miss. And considering how well BMW can build well bolstered seats, this oversight is almost unforgivable.

The rear trunk space is also smaller than I expected. The issue is that the high floor, due to the batteries (and the space for the optional range extending engine). Because of this, the i3 lacks some of the versatility a hatch of this size normally has. While the rear seats can fold-down (50/50), and there is a tiny “frunk” up-front, this isn’t a car for someone looking for maximum luggage capacity in a small package. That’s more like MINI Clubman territory.

Stepping in and out of the car is incredibly easy and comfortable thanks to the i3’s ride height. To the rear, the coach doors (one on each side) offer excellent access to the rear and give the car an almost four door feel in regards to passenger versatility. Thinking to the MINI Clubman again, I can’t help but say this is what that car’s access experience should have been from the start. 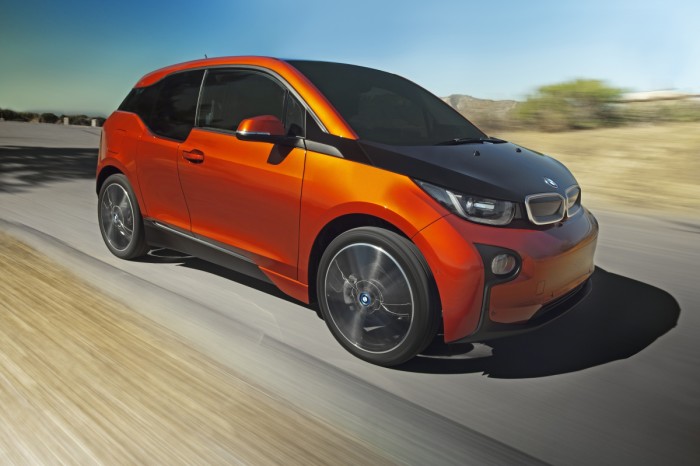 Starting the car is simple. It’s done via an oddly bulky lever on the steering column. Unlike the MINI E and the BMW ActiveE, there’s an auto parking brake that held me in place until I pressed the accelerator. Once underway I was immediately struck by the quick steering and the eagerness of the i3 to change direction. Add the immediacy of the torque and I had what felt like the perfect urban runabout at my fingertips.

While present, feedback is muted due to the electrically assisted steering but it’s adequate and frankly better than I expected. There is real communication coming through from the wheel and I had a clear picture of what the car was doing under me during spirited driving. That said, this is not (in its current form) what I could call a driver’s car. Perhaps the biggest weak link in the system is the eco orientated tires (Ecopia 155 70R90s) which tend to get overwhelmed way too early. Even though they aren’t run flats, they tend to give you little of the communication I’d hope for, much less the grip I expect. Then there’s the suspension which, while pleasantly stiff (don’t listen those other reviewers who call it uncomfortable) it can give up a little early when pushed hard. And yes, when pushed there is a nice safe level of understeering to let you know you’ve gone too far.

Does it all matter? To most buyers, absolutely not. In fact I’d say BMW about nailed the i3 as a premium electric vehicle meant for the upper mass market. Yet I came away with the distinct impression that BMW created the i3 without an enthusiasts point of view that has informed its products for generations. The performance of the i3 is strictly geared to a normal driver’s definition of the word. Yes it’s fast, and yes it feels quick around corners due to the steering ratio, but in theory this car should feel more like a MINI. Yet in practice it’s clearly not intended to. It’s a shame, given that the turning radius is dramatically better than the MINI and the power-to-weight ratio puts it right in that wheelhouse. 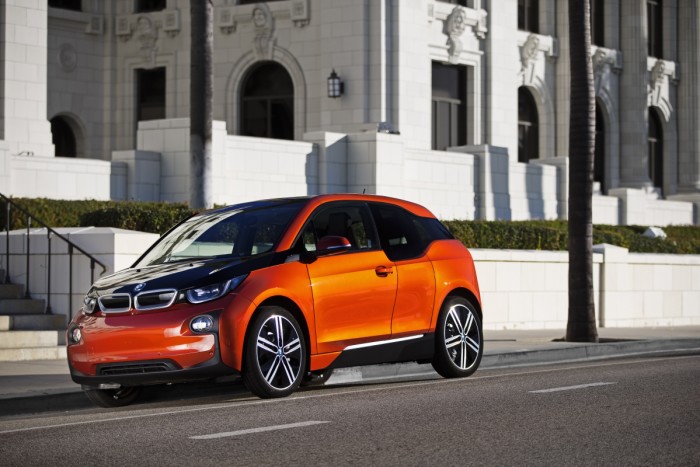 As with all electric cars, the i3 makes use of brake regeneration designed to recoup power while braking. It’s so aggressive that you’ll often find yourself not using the brakes at all when in most situation. The result is a car that isn’t as easy to drive smoothly from light to light as most vehicles one would be used to. Several times I simply let off too soon. I found the application or re-gen braking far too abrupt, which in turn made the transition from power to brake less than smooth. It’s not the power of the regeneration that was the issue but the application. Or, at least my lack of familiarity with it. Even after driving the i3 for an hour I was still not able to make braking a perfectly smooth experience. I suspect it’s something that takes time and once learned is quickly forgotten about. Yet I couldn’t help but think back to my recent drive in the Tesla Model S — another 100% electric car whose brake regeneration was immediately learnable. What are Tesla doing differently and how will everyday, non-enthusiast drivers cope with the aggression of the i3’s system? Time will tell. 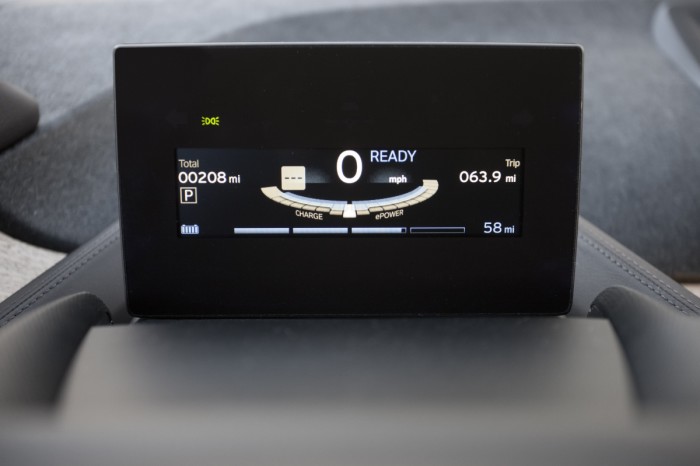 Power and Range
The i3’s standard engine is a 170hp, 11,400 rpm electric motor that has 184 lb-ft of instantaneous torque on tap. Given that the car only weighs around 2,700 lbs, acceleration is brisk with 0-30 (a crucial stat for city cars) happening in 3.5 seconds.

BMW claims a real-world range of 80-100 miles on a full charge. If that isn’t enough they’ll offer an optional range extending two cylinder gasoline powered engine that effectively doubles that range. Unlike the extender in the Chevrolet Volt, the i3 unit never directly powers the wheels. When the battery gets to a certain level, the Range Extender starts and simply maintains the battery’s current state of charge. The downside is price, at $3850, and an added 330 lbs of weight. A pricey and heavy security blanket in my mind. It adds around a second to the i3’s 0-60 time. 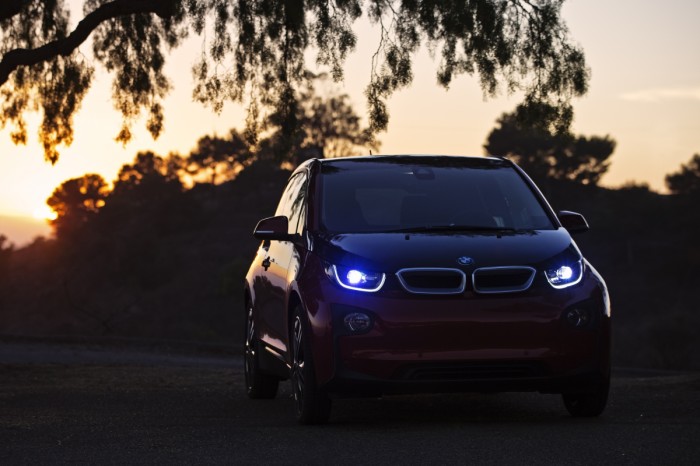 Despite the i3’s handful of struggles, charging the car is pretty painless. The batteries take around 3 hours at 220 volts to charge or 30 mins with an optional DC Combo fast charger.

BMW has given us three driving modes with the i3. Gone is sport and even normal mode. The latter seems like a mistake, even if only in name. Instead, we get Comfort, EcoPro and EcoPro+. With Comfort being basically just Normal, EcoPro is the first option to capture an additional 12% of extended range. It works by flattening out the throttle curve. EcoPro+ goes a step further and reduces several electronic features, such as air conditioning, and giving you yet another 12% of extended range. 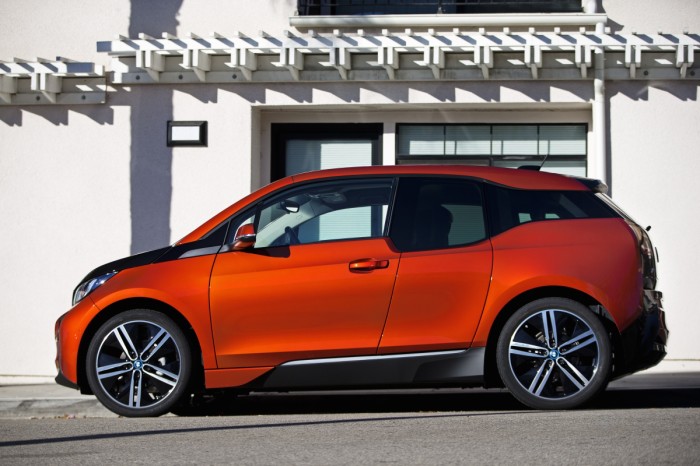 Conclusions
All this means that the i3 is simply designed to meet the needs of an everyday consumer who’s not particularly concerned with much of what we as enthusiasts love about BMW cars. It also means that BMW has smartly left itself some room to create something decidedly more sporty in the future by minimally tweaking the i3. New tires and suspension would go a long way in creating better performance. Yet perhaps the biggest performance upgrade would be proper BMW sport seats. Sure, make them out of these great, sustainable materials, but bring in that sport shape. Add in some electronic goodies such as launch control and the i3 could be the perfect urban commuter for the performance enthusiast.

As it stands now BMW has a strikingly attractive car that the upper mass market will love. Given Federal and State rebates for buying electric cars can reach as much as $10,000, the i3 can be a surprising value, all while providing great technology and an inventive take on 21st century transportation. Beautifully functional inside and remarkably unique outside, the i3 is well poised to capture the imagination of not just the tech loving electric car fans, but a much broader market.