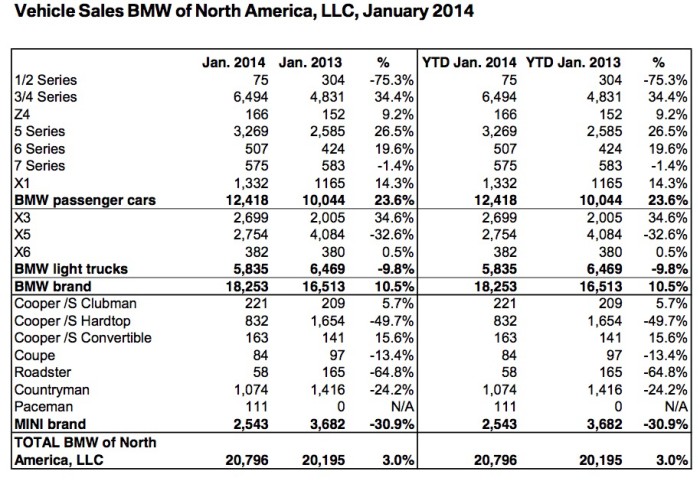 “Coming right after an historic December, the January numbers are a momentum jump-start for 2014; a pace we expect to accelerate as the partnership between BMW and Team USA hits the air this weekend at the Sochi Olympics,” said Ludwig Willisch, President and CEO, BMW of North America. “During the Olympics, viewers will get a sense of the full breadth of the BMW model range with focus on the new X5, the 2 Series, the i3 and the i8 especially.”

In January, sales of BMW used vehicles (including certified pre-owned and pre-owned) increased 6.2 percent to 14,143 vehicles compared to the 13,322 vehicles sold in January, 2013.

For January, MINI USA reports 2,543 automobiles, a decrease of 30.9 percent from the 3,682 sold in the same month a year ago. MINI USA is currently in transition from the current hardtop to the new model arriving in the second quarter.

In January, MINI used automobiles (including MINI NEXT certified pre-owned and pre-owned) reported sales of 1,881 automobiles, an increase of 22 percent from the 1,542 sold in January, 2013.

BMW Reveals its Line-up for the Paris Motor Show

BMW is Back in the Hydrogen Business