Two vehicles with four doors and similar price tags. How are they really difference? That’s the question many of you have asked over the years of the X5 and X6 and now the X3 and X4. We asked ourselves that question and ultimately BMW to better understand what makes the X4 a unique product offering.

One of the theoretical knocks agains the X4 (and the X6) is a seemingly decrease in interior volume without any benefit in performance. However that trade-off in headroom in the X4 doesn’t just serve to make it look like a coupe. It also lowers the center of gravity giving it a slight edge on the X3 in terms of vehicle dynamics.

Weight is almost identical with the X4 35i weighing (surprisingly) more than the X3 by 60 lbs. In fact other than that weight being lower to the ground, the only other difference between the two is drag which the X4 has less of. That ultimately shows up in an increase of 1 MPG on the highway over the X3.

So performance figures for the X3 and X4 are generally the same – what about dimensions themselves? As you’d expect the two are identical in almost every way. To that point BMW has released an official overlay of the two that shows just how close the interior and exterior dimensions are. One curious omission – headroom which clearly the X3 has plenty more of. 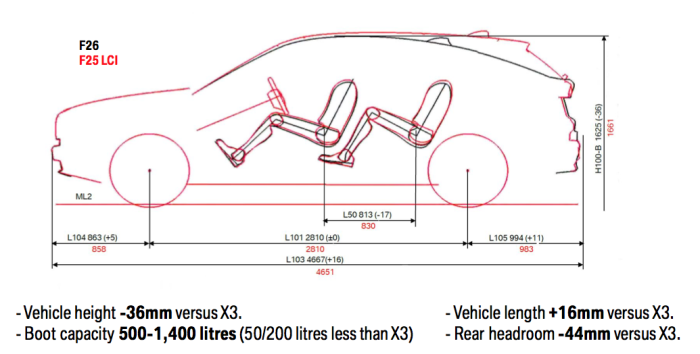 So what are the differences then? Obviously price with a similarly equipped X4 being a $3k more. But that buys more than just style. Depending on the market, BMW has endowed the X4 with more standard features to better justify it’s price and position it slightly upward of the X3 itself. Much like the 3 Series vs the 4 Series BMW seems the coupe as a personal luxury choice and has priced and equipped it accordingly.

That begs the question – which one would you prefer? For us it’s hard to argue with the X3 in terms of utility, price and performance over the similar X4. But then again if we were putting our money down neither of these would be the choice. That honor would go to the cheaper, faster, more attractive and more efficient 3 Series wagon. And as a bonus it has more interior space than either of the two X models.

The X4 Is Coming March 6th