During our process of reviewing the M4 this week a few of us took out both it and our 1M for some back to back road drives. While we didn’t want to do a full comparison (we’ve already done this along with the E92 M3), it is worth talking about both of these cars together. After all, in some ways the 1M is the M4′s baby brother much more than it was to the E92 M3. 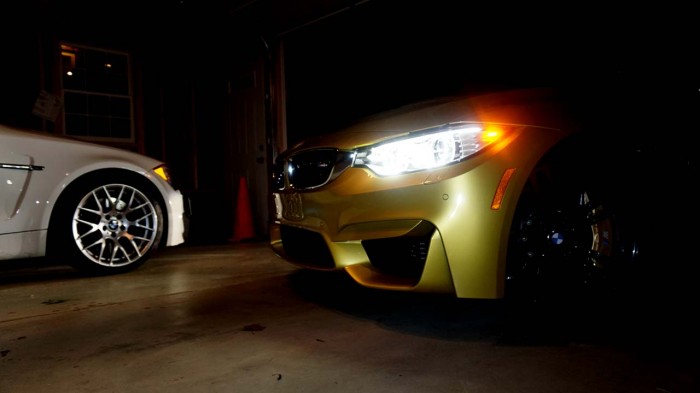 – Despite engines that, on paper don’t seem that far apart, the M4 sounds like a completely different animal. Clearly BMW M was worried about a lack of character from the turbo inline six and have endowed it with a massive dose of noises from almost any input.
– Wow the M4’s carbon ceramic brakes are amazing. The 1M’s standard steel stoppers don’t have as much weight to deal with yet don’t inspire the same confidence.
– The MDM mode in the M4 is so limiting it’s almost irrelevant. Yet the 1M’s allows so much slip that you can almost get completely sideways if you jab the throttle at the right time. We can only assume BMW M was concerned about M4 owners getting into trouble a little too quickly given the increase in power and torque.
– The M4 is a much more deliberate car when it comes to drifting and car control. The 1M on the other hand will swap ends much much quicker thanks to its shorter wheelbase. In other words, it’s a bit more of a handful.
– The 1M is incredibly rapid. Especially from 30-80 mph. The M4 is that and more.
– Steering feel in the M4 is really good for an EPS system. Then you get into the 1M and realize what it could have been. The 1M feels like a gokart in comparison.
– The fit and finish of the M4 shames the old E82 interior design and its materials. Yet somehow the 1M’s finishes used almost makes up for it. Almost.
– The M4 feels decidedly larger and heavier after driving the 1M (it weighs 289 lbs more)

BMW Classic Celebrates 40 Years of BMW M at the \’Ring