Official Release: BMW is expanding its line-up of M Performance Parts from the Original BMW Accessories range in time for the Essen Motor Show 2014 (29.11–07.12. 2014). The new BMW M Performance Parts for the BMW X3 and BMW X4, BMW M3, BMW M4 Coupe and BMW M4 Convertible lend these models an even sharper sporting edge. As well as attractive design upgrades for the interior and exterior, the range also includes functional accessories which boost the performance of classical BMW models, for example, and inject more emotional appeal into the engine’s soundtrack. The new accessories bring the total number of BMW M Performance Parts designed to raise sporty driving pleasure another notch to over 1,200 – from a starter kit all the way to exhaust systems.

These model-specific BMW M Performance products from the accessories range, which are also available for other BMW model series, have been developed using the decades of racing experience and innovative power of BMW M GmbH. Thanks to the company’s deep reserves of expertise, customers can rest assured that the retrofit components have been adapted precisely to the character and qualities of the individual models. They also meet the uncompromising quality standards of the BMW Group as far as materials selection, design and quality of workmanship are concerned. All the products belong to the Original BMW Accessories range. When retrofitted, they do not in any way affect the warranty terms for the relevant vehicle.

Sporty new accents for the exterior of the BMW X3 and BMW X4. 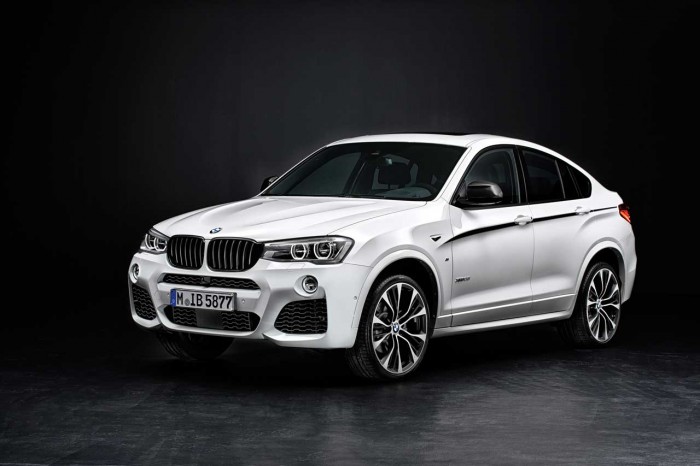 The new BMW M Performance Parts shine an even brighter spotlight on the cars’ sporting ability and dynamic aura. Examples include a black version of the BMW kidney grille for the BMW X3 and BMW X4, as well as exterior mirror caps and a rear spoiler (BMW X4 only) in high-tech carbon. The carbon components have been elaborately manufactured by hand. Elsewhere, BMW M Performance accent strips in Black/Silver can be ordered for the BMW X3 and BMW X4 to highlight the two X models’ dynamic lines to pleasing effect. And the BMW M Performance light-alloy wheels available for both the BMW X3 and the BMW X4 add further sporting emphasis to both the exterior design of the two cars and their driving characteristics. The high-quality forged wheels stand out with their distinctive design and low weight. They make an effective contribution to the reduction in the unsprung mass of the two cars, enhancing agility and steering responses in the process. The BMW M Performance light-alloy wheels come in 21-inch format and with mixed tyres. The two models each get their own take on a double-spoke design, complete with the now familiar BMW M Performance bi-colour finish in Orbit Grey with polished spoke fronts.

As well as further enhancing the muscular athleticism of the BMW M3 and BMW M4, the main benefit of the BMW M Performance aerodynamic components for these high-performance sports cars can be found in further improvements to airflow at high speed. Customers can choose from a selection of items including add-on parts in carbon for the side sections of the front bumper, a front attachment made from polyurethane (PUR), a carbon rear diffuser and a carbon rear spoiler. PUR is also used for the side skirt attachments and a rear spoiler for the BMW M3. In addition, tri-colour side decals with “M Performance” lettering are available for the Sedan, Coupe and Convertible.

The BMW M Performance steering wheel with Alcantara covering, carbon trim and Race Display does its bit to ensure the BMW M3 and BMW M4 deliver a particularly full-blooded driving experience. The painted carbon steering wheel trim carries “M Performance” lettering. The Alcantara covering for the steering wheel rim has contrast stitching in the three BMW M colours. And the thumb rests feature a pair of embedded buttons used to activate Efficient Dynamics mode, Sport mode and Race mode. The driver can use the integrated display at the top of the steering wheel rim to view gear change signals and lateral/longitudinal acceleration figures, among other things. Sport mode gives the driver access to a stopwatch function with displays for hours, minutes and seconds. Lateral/longitudinal acceleration figures are also shown. During committed track sessions, Race mode allows lap times to be displayed and stored in minutes, seconds and hundredths of seconds. The top speeds and maximum lateral/longitudinal acceleration figures for the most recent 50 laps completed can also be stored.

Power Kits boost the performance of the BMW X3 and BMW X4.

A BMW M Performance valve silencer, whose operating mode can be adjusted remotely via Bluetooth, is available exclusively for the BMW X4 xDrive35i. As well as Sport mode – distinguished by a strikingly emotion-rich soundtrack – drivers can also select the Track mode conceived for use exclusively on the race track, which specialises in even more hardcore and performance-focused sound development. The stainless-steel silencer system also comes with trapezoidal chrome tailpipe embellishers in the style favoured by eight-cylinder BMWs. Twin-pipe BMW M Performance embellishers in chrome are also available for the BMW X4 xDrive20d, BMW X3 sDrive18d and BMW X3 xDrive20d.

Striking engine soundtrack for the BMW M3 and BMW M4.

The BMW M Performance silencer system developed specially for the BMW M3 and BMW M4 uses optimised exhaust gas channelling to generate an emotion-rich engine soundtrack that underlines the performance characteristics of the biturbo straight-six engine in stirring fashion. The lightweight flap control exhaust system comprises a stainless-steel exhaust system and a silencer made completely from titanium and displaying M Performance lettering when viewed from the rear. A distinctive stylistic highlight are the classy tailpipe embellishers, in either titanium or carbon, with M logo. The use of titanium ensures the BMW M Performance silencer system is exceptionally heat-resistant, corrosion-resistant and lightweight. Indeed, it weighs around eight kilograms less than the standard item. The driver can choose from two settings for the sound characteristics of the BMW M Performance silencer system, both of which are linked to an engine performance profile that can be activated at the touch of a button. In Standard mode, the sound development is already much more dramatic than that of a regular model, has a defined sporting edge and is also suitable for everyday use. In SPORT and SPORT+ modes the development of power is accompanied by a stunningly powerful, emotionally rich soundtrack, which gives the driver extremely clear feedback on engine load.

The BMW M Performance Drive Analyser – available for all BMW models from model year 2011 – allows owners to examine their driving style with impressive precision. Whether the owner is pursuing lap times on the race track or simply driving from A to B on the road, this new tool records driving dynamics data with professional efficiency. The BMW M Performance Drive Analyser consists of an On-Board Diagnostic (OBD) stick, which is plugged into the relevant socket in the car, as well as software in the form of an app for Android and iOS smartphones and tablets. The connection between the car and OBD stick is via Bluetooth. The car’s Click & Drive holder, meanwhile, enables easy attachment of the smartphone to the windscreen. All the measurements, such as the car’s speed, the gear currently engaged, accelerator and brake usage, a range of other engine data, and even lateral acceleration, are stored straight onto the smartphone/tablet and can be accessed at any time. Drivers can study the results directly on their smartphone after every journey.