I couldn’t be more giddy as my flight touches down early Sunday morning. Somewhere in the depths of O’Hare international airport lies an Austin Yellow M4 waiting for me.

Finally with the insanity of traversing a massive airport behind me I see it in the morning light. Austin Yellow is one of those colors that divides opinion. But on this morning, with this kind of anticipation, it’s a welcome sight. Its frenetic energy matches the character of the car as I ignite the twin turbo inline six. Clearly BMW M knows how its owners like drama. Like the M3 before it and even the 1M, the S55 under the hood starts like a caged animal awoken against its will. 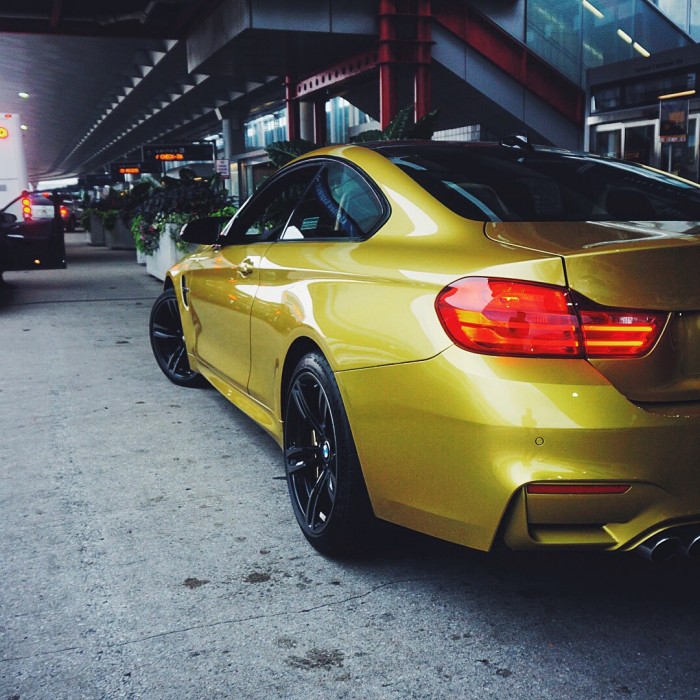 Our M4 test car is fitted with the increasingly popular DCT – a transmission that I’ve reluctantly fallen in love with. Reluctantly because the manual transmission deserves to live on forever in cars like the M4. The problem is that the DCT is so good (and so good at reacting quickly while feeling mechanical) that it’s hard to pass up on the options sheet. As you can imagine take-rates continue to rise. 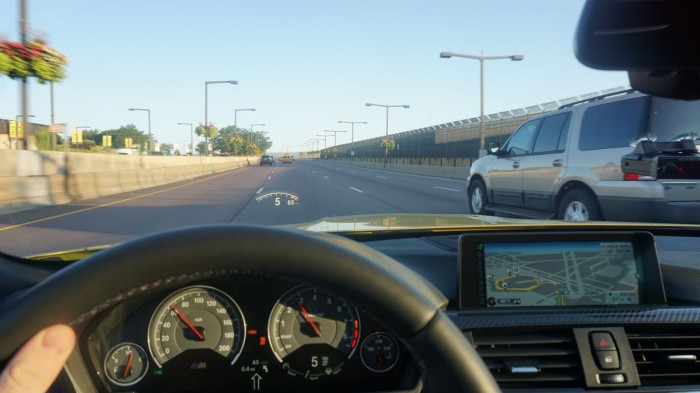 Slotted into manual (oh how I wish M would require drivers to use manual mode in the DCT) I pull away into a beautiful Chicago morning and onto Road America.

Today is a good day. Driving a BMW M4 headed to Elkhart Lake Wisconsin where I’ll spend time with BMW Team RLL and soak up every minute of the Tudor Sports Car Championship. But it’s not just the race that makes the day especially compelling. It’s the track. And the town. The legendary after-parties that often follow races at Road America help make this event so special. 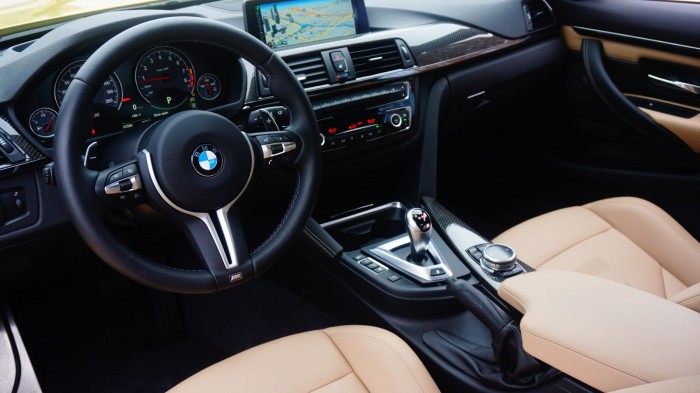 The M4 is stealing my attention at the moment though. With no traffic and already on B roads I’m finding the car as enjoyable as I remember. When we first tested the M4 it was against the E92 M3 and 1M on the roads around Road America and we came away with no clear winner. The 1M stole our hearts but the moment we stepped into the E92 we fell in love with an engine in a way that will surely never be repeated. And yet the M4 not only held its own but blinded us with technology, speed and enough involvement to forgive its electric steering. Picking a winner came down to personal preference and even divided the BimmerFile team.

One thing that is very clear, our Austin Yellow M4 clearly has reached celebrity status by the time we come to rest in the Road America paddock. And it’s not just the exterior color but the two-tone wheels and the carbon ceramic bling that complete the rather loud statement. This BMW does not believe in the understated German thing. 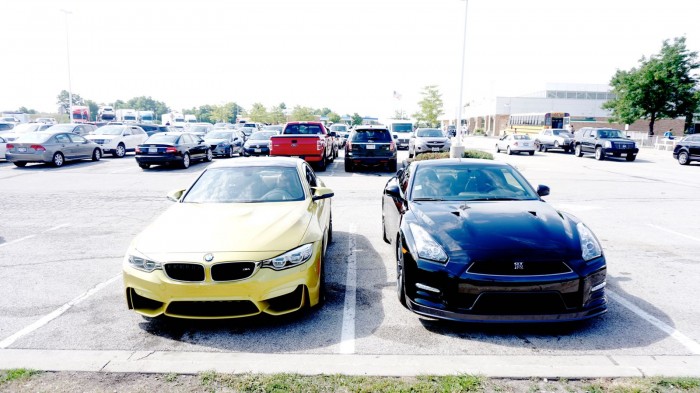 Fast forward four hours and we’re sunbaked and high on racing fumes as we walk back to the lot. There it is. Surrounded by people sizing it up and taking it in. The M4 isn’t just a new M3 but a further signal that BMWM is evolving.

Back in the car we head into town the long way through some of the best backroads the Midwest has to offer. The M4 has been met with a lukewarm response by some, with its steering and uninteresting engine being often cited as the big offenders. I can get behind the steering being disappointing. But that’s only in context of the previous M3 which in itself had disappointing steering feel compared to what came before it. The reality is that 98% of owners will never find it lacking and instead would likely nominate it as a point of driving satisfaction. So should we care? The answer of course is yes but to what degree? The fact is the M4 feels great at the limit and has an enormous performance advantage over what came before it. That ability to squeeze dramatically more performance out of the car in every situation makes it an absolute riot to drive and live with. 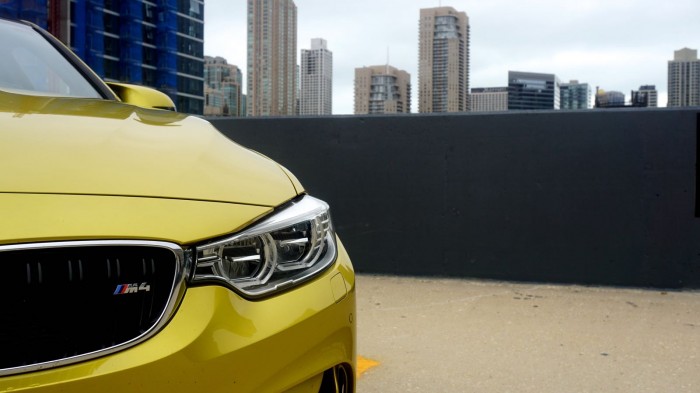 Then there’s the engine. A twin turbo charged inline six M car would have sounded ludicrous 20 years ago but the BMWM simply has no choice these days. So Albert Biermann and team simply rolled up their sleeves and created one of the most compelling forced induction power units ever made. No it doesn’t have the purity in sound and power delivery of the S54 or S65. But what it lacks in provenance it makes up for in blistering performance and a raucous and snorting soundtrack.

Tackling the back roads around Road America it occurred to me that the process of driving the M4 was giving me just as much satisfaction as the outright pace. Shod with the DCT, I ripped through 2nd, 3rd and 4th and back down again as often as possible as much for the aural pleasures as anything else. This new S55 engine has both an immediacy and elasticity to its reactions that makes it surprisingly endearing and (thankfully) almost feel naturally aspirated. 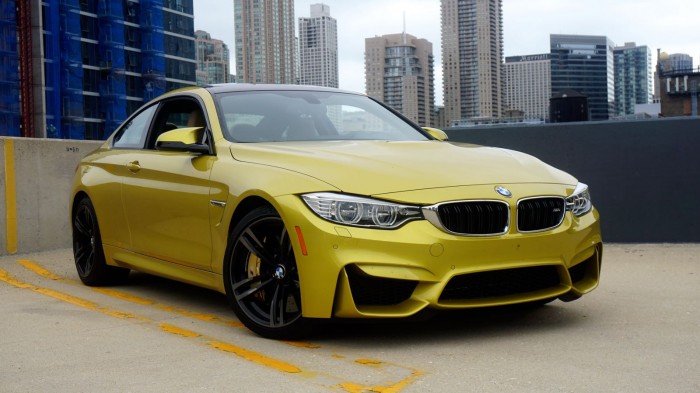 The secret to this is the ease that the engine revs. During the recent US launch of the M4 I had a chance to have a long conversation with Mr. Biermann. One of the topics we kept coming back to was the new S55 vs the naturally aspirated engines that came before it. In many ways he explained those engines inspired M engineers to push further with the turbo. Yes the new engine would have more performance than what came before it due to turbos. But the team was adamant that it feel just as eager and satisfying to push to redline as the S54. The moment you push the new M4 to redline that determination shows. This feels like an M car.

While there’s theatre in the M4’s power delivery, what you walk away shaking your head at is the outright performance. Its neck snapping torque, optional ceramic brakes combined with a chassis thoroughly transformed by the M Division creates a car that feels decidedly quicker the E92 M3. And yet the entire package is easier to live with by miles. 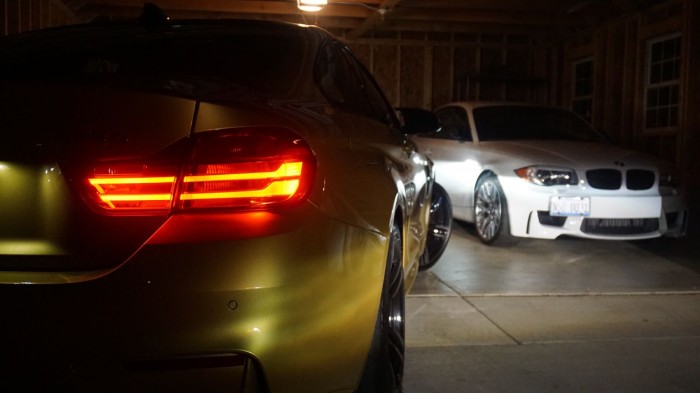 Despite this the M4 has been picked apart by some in the automotive press. I can understand why on the face of it. The soundtrack, no matter how full and interesting feels very deliberate and manufacturered at times. The steering feel is adequate until you drive the E92 or 1M back to back. Once you do you’ll never look at the F80/F82 the same. Sources have told us that M spent boatloads of money engineering and refining the electronic steering rack in the M4. The fact that it’s good but not great is troubling in the eyes of some. There’s no way around the fact that the F80/F82 can’t match the feel of a car like the 1M or even E90/E92. Those cars had a wheel that felt alive in your hand and full of texture and nuance. This new M4 gives you adequate feedback but doesn’t satisfy in the same way. In total there’s too much virtual reality happening with the sound, steering and forced induction to feel analog like previous M cars.

Yes the previous M3, the E90/E92 is a special car that, in some ways, will never be equaled. However some of those very attributes that made it so special also make it less than a compelling daily driver. Economy in the teens and a fuel tank the same size as a 318i make for a disappointing range. Then there’s that glorious high revving V8 that can be a chore in daily commutes and a manual transmission with notchiness that can at times be less than satisfying.
. 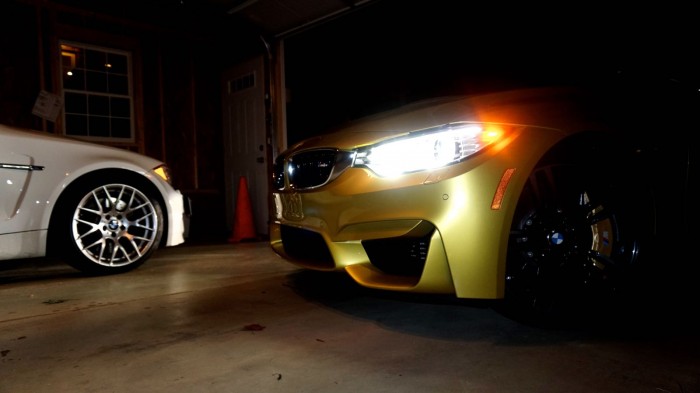 The new M4 (and four door M3) rights many of these wrong. The only question is that, in doing so, has M left out the character? In my week with the car the answer is yes. And no. Yes the subtlety you could feel through the wheel in the E92 (and especially 1M) is absent. Yes the mechanical sounds of the S54 and S65 are missing in the new turbocharged S55. And there’s more isolation within the driving experience. Yet times change and in that process the M3 has become the M4. In our minds what the M4 gains in livability makes up for any losses and in the process retains its crown as one of the best vehicles to drive in the world. 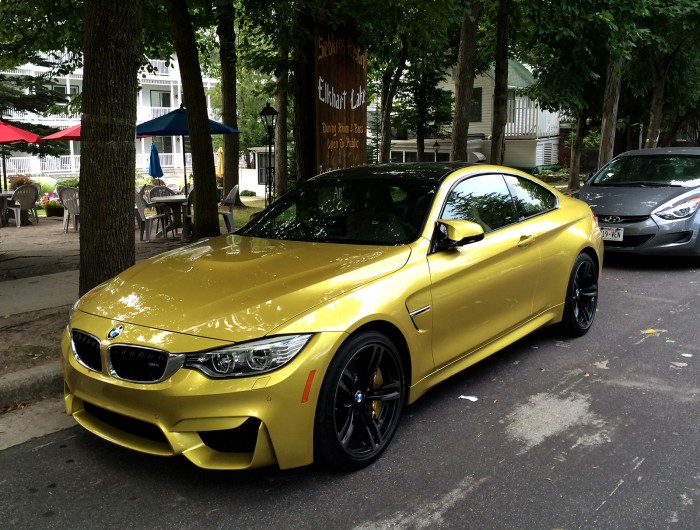 Walking out of the famous Siebkens Inn in Elkhart Lake and opening the door to the Austin Yellow M4 I’m struck by how much I’ve fallen for this car. To be honest while I knew the M4 would astound with performance, I didn’t think I’d find enough character under the hood or behind the wheel. I thought I’d walk away feeling incredibly lucky (and maybe a little smug) to have a 1M in my garage. The truth is that long drive back to Chicago was full of calculating payments and financing strategies for the four-door version to round out the garage.

When the E92 M3 was released in 2007 Jeremy Clarkson proclaimed “(The M3) is the best car, and always will be, and there’s no point in ever thinking otherwise.” A week and 600 miles behind the wheel (and in spite a number increase) that statement is as true as ever. Despite the equation being dramatically different than what came before it, the sum of its parts feels spot for our time.

Call Us desensitized but that grille is starting to look correct