Official Release: Strong showing in the “Green Hell”: BMW Sports Trophy Team Marc VDS finished second at the Nürburgring 24 Hours (DE). After 156 laps, the number 25 BMW Z4 GT3 crossed the line at the 43rd running of the endurance classic just 40.729 seconds behind the winning car. It was the closest finish in the history of the event since 1970. Maxime Martin (BE), Lucas Luhr (DE), Markus Palttala (FI) and Richard Westbrook (GB) shared the driving duties over the course of the 24 hours and, like the team, produced impressive performances. In the end, however, they just came up short of what would have been a 20th overall victory for BMW.

BMW Sports Trophy Team Marc VDS repeated its result from 2013, when it finished the runners-up with the BMW Z4 GT3 – again with Martin at the wheel. The second BMW Sports Trophy Team Marc VDS car also claimed an excellent result in front of 200,000 spectators: Dirk Adorf (DE), Augusto Farfus (BR), Nick Catsburg (NL) and Jörg Müller (DE) were at the wheel of the number 26 car and narrowly missed out on a podium finish, coming home in fourth place. Catsburg clocked the fastest lap of the entire race on lap 120, with a time of 8:18.690 minutes. 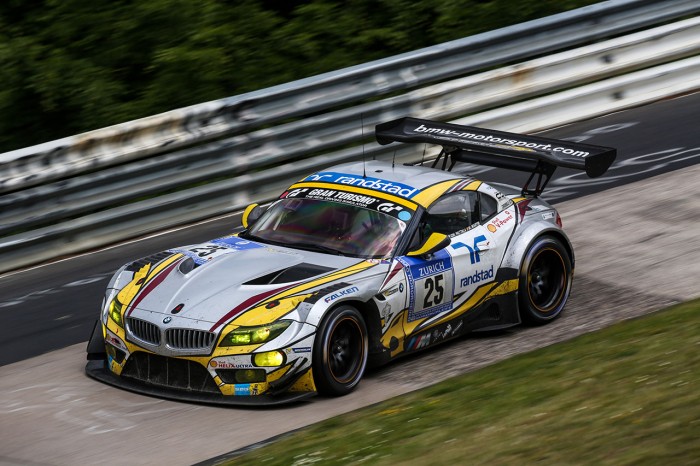 “Over the past 24 hours we have seen virtually everything that makes this endurance classic so enthralling,” said BMW Motorsport Director Jens Marquardt. “In a thrilling race, we eventually finished an excellent second and came within a whisker of winning. That is a fantastic result for the BMW Z4 GT3 on its last works-assisted outing – especially given the strong opposition. Although we did not quite get our 20th overall victory, the combination of a flawless job by the team and drivers, and a robust, mature car kept the race extremely exciting right through to the finish. Our quartet of drivers, who worked perfectly with each other, deserve particular mention: Lucas Luhr, Maxime Martin, Richard Westbrook and Markus Palttala never let anything knock them off their stride – even in some extremely difficult conditions. They were fast when they had to be, but reined themselves in when necessary. They did a very good job. The second BMW Sports Trophy Team Marc VDS car also had a very good race. It dropped back a bit due to some problems during pit stops, but was still able to claim a good result.”

“Although we are all pleased about the great overall result, I feel particularly sorry for BMW Sports Trophy Team Schubert today. The team also did a very good job – but it just goes to show how quickly your luck can change here in the Eifel Mountains. Two sudden showers, two scary moments for Claudia and Dirk, and suddenly you are denied any chance of winning. The Walkenhorst team also enjoyed a fantastic race: they also had a flawless race with the number 17 car and finished an excellent sixth. Another great performance came from the Sorg Rennsport team in the BMW M235i Racing Cup: 25th place overall – that is not to be sniffed at. And our media BMW M235i Racing was also flawless. The drivers showed incredible consistency and ultimately came home 42nd overall. I would also like to highlight the extraordinary backdrop to this race: the great fan community created a genuine festival atmosphere. Although I have been coming here for many years, I really noticed it this year. And that is despite the tragic events in the run-up to the race. However, we saw that the measures put in place were effective, thanks in no small part to the discipline shown by the competitors. At this point, we would like to dedicate our podium finish to the spectator who died a few weeks ago. Congratulations to the Audi WRT team.” 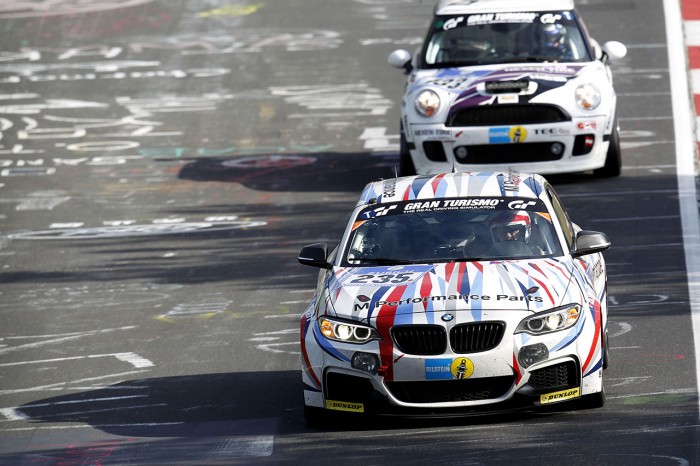 The number 235 BMW M235i Racing, in which the two motorsport journalists Bernd Ostmann (DE) and Christian Gebhardt (DE) alternated with BMW Motorsport Junior Victor Bouveng (SE) and Harald Grohs (DE) at the wheel, enjoyed a successful race, winning the SP 8T class and finishing 42nd overall. This marked Grohs’ 30th start at the Nürburgring 24 Hours – and his last, as he announced after the race.

Bas Leinders (BMW Sports Trophy Team Marc VDS, Team Principal): “It is fantastic to finish with both cars – and in second and fourth places. An incredible amount of work goes into keeping the cars in the face for the full 24 hours. We are delighted to have achieved that. My team did an awesome job. Thank you to everyone in the team. On the other hand, we obviously came to the Nordschleife to win. That was our goal. It was a great fight, but unfortunately we lost it.”

Lucas Luhr (BMW Sports Trophy Team Marc VDS, car number 25, 2nd): “Even though we lost a few minutes in the opening hours of the race, it was always clear to me that we could still challenge at the front if we came through the night unscathed. We did that, because we went for the right tyre when it started to rain heavily late in the evening. All in all, I had a huge amount of fun all weekend at the Nürburgring with the team and my fellow drivers. However, we obviously came here to win.”

Maxime Martin (BMW Sports Trophy Team Marc VDS, car number 25, 2nd): “It was a really close race. The winning Audi produced a great race – and the same goes for us. We were close to winning, but it was not meant to be. That is racing for you sometimes. We will be back for another shot.”

Markus Palttala (BMW Sports Trophy Team Marc VDS, car number 25, 2nd): “I am proud of the guys in the team. The car worked superbly, the drivers were all consistently quick and we did a very good job. Unfortunately it was not quite good enough to win. However, although we obviously wanted to win, second place is still a very good effort. For me personally, this is actually my first podium at this race.”

Richard Westbrook (BMW Sports Trophy Team Marc VDS, car number 25, 2nd): “That was a fantastic race with some great duels. You can obviously look for reasons why we narrowly missed out on the win, but on the whole we should be proud of the second place we achieved here. Appearing here with BMW, this magnificent team and fantastic team-mates was an awesome experience for me.”

Augusto Farfus (BMW Sports Trophy Team Marc VDS, car number 26, 4th): “I am disappointed, because we had a car we could have won with. We were on pole and clocked the fastest lap of the race. Unfortunately we made small mistakes with both cars, which ultimately cost us the win. That shows that the standard of racing at this race is so high that you cannot afford even the slightest slip-up.”

Dirk Adorf (BMW Sports Trophy Team Marc VDS, car number 26, 4th): “Congratulations to Audi on the win, but above all compliments to our team. We did everything right that you have to do right at a 24-hour race. And we were very fast. Unfortunately the misfortune during the pit stop in the night cost us too much time. Second and fourth is an excellent result for the team, but it is a shame we could not quite get a win with the BMW Z4 GT3 at its farewell race.”

Jörg Müller (BMW Sports Trophy Team Marc VDS, car number 26, 4th): “We were positive. That is definitely the positive we can take from this race. Unfortunately, however, we made a mistake, which we could not afford against such strong opposition. Despite this, the team deserves a huge compliment. I have never driven a car in the final stint of a 24-hour race that still feels as good as it did in the first stint. The BMW Z4 GT3 had really been prepared perfectly.”

Nick Catsburg (BMW Sports Trophy Team Marc VDS, car number 26, 4th): “I think we all did a perfect job and have nothing to be ashamed of. We had the speed to finish on the podium, but unfortunately came up just short due to the time we lost in the night. Despite this, I am very proud of our performance.”

John Edwards (Walkenhorst Motorsport powered by Dunlop, car number 17, 6th): “That was 24 very long hours – definitely the most exhausting endurance race I have ever been involved in. The Nürburgring is a very special challenge. When you see the teams that finished ahead of us, sixth place is an outstanding result for a privateer team like Walkenhorst Motorsport. I am delighted for the guys.”

Victor Bouveng (BMW Motorsport, car number 235, 1st SP 8T): “My first 24-hour race was an incredible experience. Driving in the night, double stints, the masses of fans at the side of the track – that was all completely new to me. We did a perfect job as a team and brought the car home without a single scratch. It doesn’t get much better than that.”

Harald Grohs (BMW Motorsport, car number 235, 1st SP 8T): “I could not wish for a better ending to my career as a 24-hour racing driver. Therefore, I can now announce that that was my final start at this kind of endurance race. At 71 years of age, I think I prepared superbly for this challenge again, and mastered it without any problems. However, the time has come for me to focus more on my other roles. Our BMW M235i Racing was absolutely perfect and we did not receive a single penalty. My fellow drivers deserve great praise for that. It was hugely enjoyable.”

BMW Preps for the 24 Hour of the Nurburgring This Weekend