BMW is lifting the covers on its latest M Performance products the X4 M40i. Unlike the previous M Performance crossover (the X5 M50d) this one will make it to North America. Also worth nothing that there’s a strong possibility that the X4 M40i gives us a sneak peak at the engine that will be powering the upcoming M2.

The M40i comes standard with a revised suspension, engine electronics and rear wheel biased xDrive among many other changes. What’s changed over the standard N55 engine found in the X4 35i? To start BMW M has added a higher level of turbo boost pressure and an increase in the amount of fuel injected. Additionally the engine has been fitted with an aerodynamically tuned air intake manifold as well as an exhaust system optimized both in terms of back pressure and sound characteristics in order to enhance performance. A separate oil cooler helps to optimize temperature under any driving conditions. M also fitted the M40i with an intelligent valve control, a back pressure-optimized double-flow exhaust system fitted beneath the floor of the vehicle, as well as resonator for a more full sound. 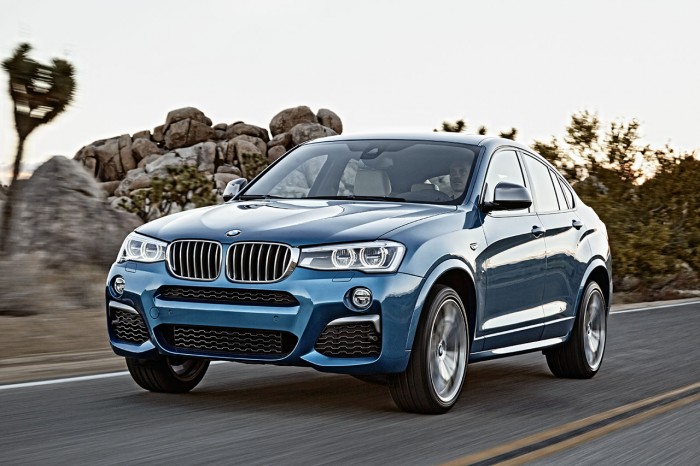 In short the X4 M40i takes the formula that works so well for the M235i and applies it to the most performance oriented crossover BMW makes. The results should give the X4 a level of performance that isn’t typically seen in the segment.

The X4 M40i will make its public debut at the LA Autoshow in November and should hit dealers in Europe this winter with an early spring launch in North America. 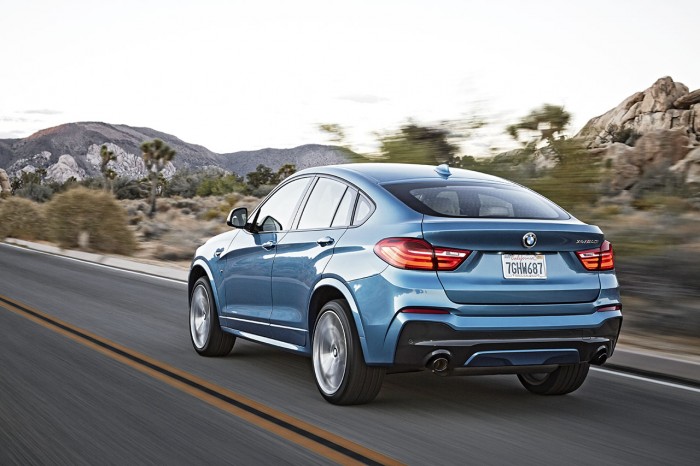 Official Release: Today, with the introduction of the new BMW X4 M40i, the successful BMW X4 has gained a new top model. In the Sports Activity Coupe segment (SAC), the BMW X4 M40i is setting new standards with enhanced driving dynamics and best-in-segment acceleration. The new BMW X4 M40i will be available at dealers starting February 2016. 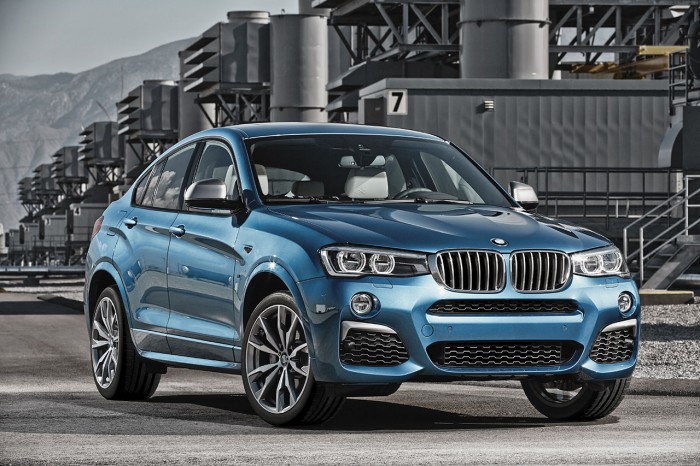 The exterior of the new BMW X4 M40i makes it stand out as a clear member of the BMW M Performance family. Exclusive Ferric Gray metallic accents on the front of the vehicle and side mirrors, as well as the exclusive 20-inch M light-alloy double-spoke wheels with optional Michelin Pilot Super Sport tires and the sport exhaust system with valve control and Black Chrome tailpipes on both sides emphasize the unique character of the new BMW X4 M40i. The M leather wrapped steering wheel, M gear shift lever, sport seats, model-specific door sills and “X4 M40i” digital lettering on the instrument cluster decorate the interior, assuring immediate recognition as a BMW M Performance model.

A newly developed M Performance TwinPower Turbo inline 6 cylinder gasoline engine celebrates its world premiere in the new BMW X4 M40i. This engine delivers 355 hp at between 5,800 and 6,000 rpm from its three-liter displacement, providing a maximum torque of 343 lb-ft. With this high-performance engine and the advanced M Performance TwinPower Turbo technology, the BMW X4 M40i delivers best-in-class acceleration, running the sprint from 0-60 mph in just 4.7 seconds.

The specially tuned sports chassis of the new BMW X4 M40i provides excellent driving dynamics at an advanced level with stronger springs and stabilizers, increased camber on the front axle, and adaptive dampers specifically tuned to M Performance specifications. The BMW xDrive all-wheel drive system has been recalibrated with more power routed to the rear wheels during normal operation. The Performance Control ensures a responsive steering with more road feedback as well confident dynamics due to a specific tuning of the steering.

The newly developed M Performance TwinPower Turbo inline 6 cylinder gasoline engine for the new BMW X4 M40i combines high performance with exemplary fuel economy. Accordingly, the lightweight, thermodynamically optimized aluminium engine has been constructed with a closed-deck design. In this type of construction, the water jacket surrounding the cylinders is sealed at the top, which endows the crankcase with an exceptionally high degree of stiffness. 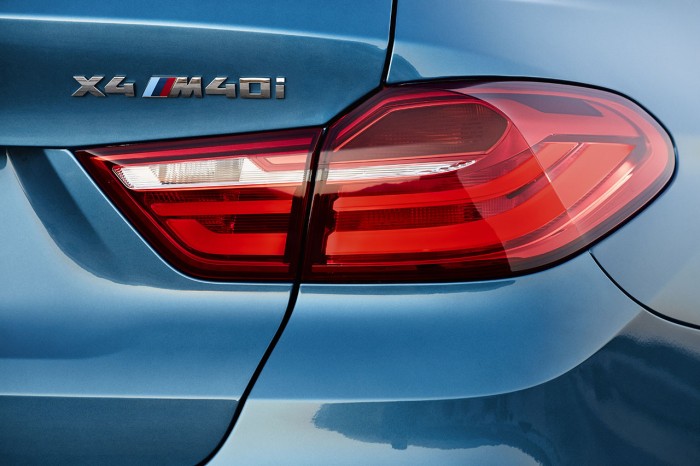 The drive unit powering the new BMW X4 M40i is based upon the three-liter, inline 6 cylinder engine in the BMW X4 xDrive35i. The chassis has been optimized using a forged steel crankshaft, pistons with a modified top ring, crankshaft bearings and high performance spark plugs in its 6 cylinder inline engine with M TwinPower Turbo technology.
In addition to a higher level of turbo boost pressure and an increase in the amount of fuel injected, the engine has been fitted with an aerodynamically tuned air intake manifold as well as an exhaust system optimized both in terms of back pressure and sound characteristics in order to enhance performance. A separate oil cooler guarantees that the optimum operating temperature of this extremely powerful engine is maintained under all driving conditions. The distinctive exhaust system fitted to the new BMW X4 M40i is unmistakable with tailpipes on both sides finished in Black Chrome. The radical technical changes include, an intelligent valve control, a back pressure-optimized double-flow exhaust system fitted beneath the floor of the vehicle, as well as resonator tuning specific to M Performance. The result is a powerful sound, individually determined by the driver depending on driving mode and driving situation, perfectly emphasizing the car’s sporty character acoustically. 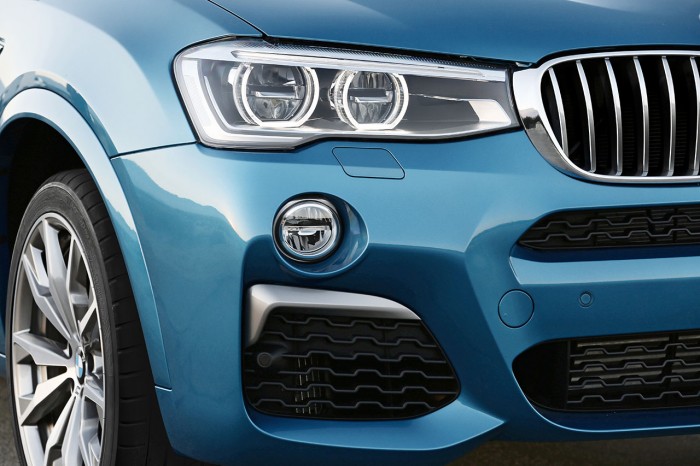 This cutting-edge drive technology in the new BMW X4 M40i guarantees the free-revving thrilling typical of a BMW M engine and its outstanding power delivery.

The integration of the turbocharger into the exhaust manifold also makes a significant contribution to the highly efficient power optimization provided by M Performance TwinPower Turbo technology in the new 6 cylinder inline engine in the new BMW X4 M40i. As internal friction is minimized, the warm-up phase required less time.
Excellent driving performance.

Technical enhancements have resulted in the most powerful M Performance gasoline engine to date. The new engine powers the new BMW X4 M40i with 355 hp at between 5,800 and 6,000 rpm. This corresponds to an increase in performance of nearly 18 percent compared to the BMW X4 xDrive35i. At the same time, these internal engine modifications have increased maximum torque by a good 14 percent to 343 lb-ft between 1,350 and 5,250 rpm. The BMW X4 M40i completes the sprint from zero to 60 mph in just 4.7 seconds before hitting its electronically limited top speed of 150 mph.

The increased camber on the double-joint front axle and the strengthening of the wishbones result in increased steering response and more steering feedback. Stiffer springs and reinforced stabilizers on both front and rear axles also reduce roll tendency and optimize driving dynamics. These measures are most effectively supported by the M Performance specific tuning, performed on the electronically controlled damping system. 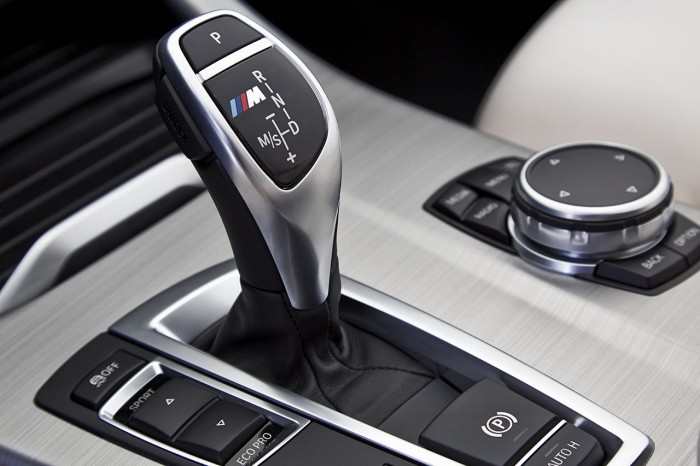 The 8-speed STEPTRONIC sports transmission, fitted as standard equipment in the new BMW X4 M40i, is responsible for the transmission of the energy supplied by the most powerful M Performance gasoline engine to date, making a significant contribution to the dynamics of this M Performance vehicle. The M Performance-specific tuning of the gear shift programs, which features distinctively sporty shifts and higher downshift spontaneity throughout the entire range of engine speed, was specially adapted to the engine characteristics. Sporty, direct powertrain connectivity is achieved by carefully avoiding converter slip outside of gear changes. In addition, the 8-speed Steptronic sports transmission has Launch Control as standard. With this easy-to-use system, an ambitious driver is able to optimally accelerate his BMW X4 M40i under all conditions. For a decidedly sporty driving style, the 8-speed Steptronic sports transmission can also be controlled via paddle shifters mounted on the steering wheel. In classic fashion, when in manual mode the selected gear is maintained, even when the engine speed limiter has been triggered. In addition, with its compact design, low weight and its optimized efficiency, this transmission makes a significant contribution to reducing both fuel consumption and emissions. 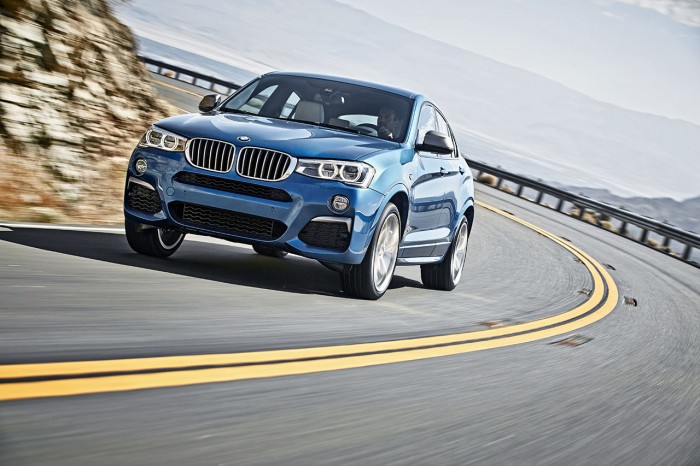 Like all of the BMW X4 models, the BMW X4 M40i is fitted with intelligent BMW xDrive all- wheel drive. With Performance Control as standard, the system regulates the variable distribution of drive torque between the two rear wheels. These systems help to achieve a unique level of dynamics, agility and traction. Regardless of the road surface, the vehicle follows the line the driver intends far more precisely and requires noticeably fewer steering corrections. Furthermore, the BMW xDrive fitted to the BMW X4 M40i has been configured to place emphasis on the rear wheels, a typical characteristic of BMW M Performance driving dynamics. 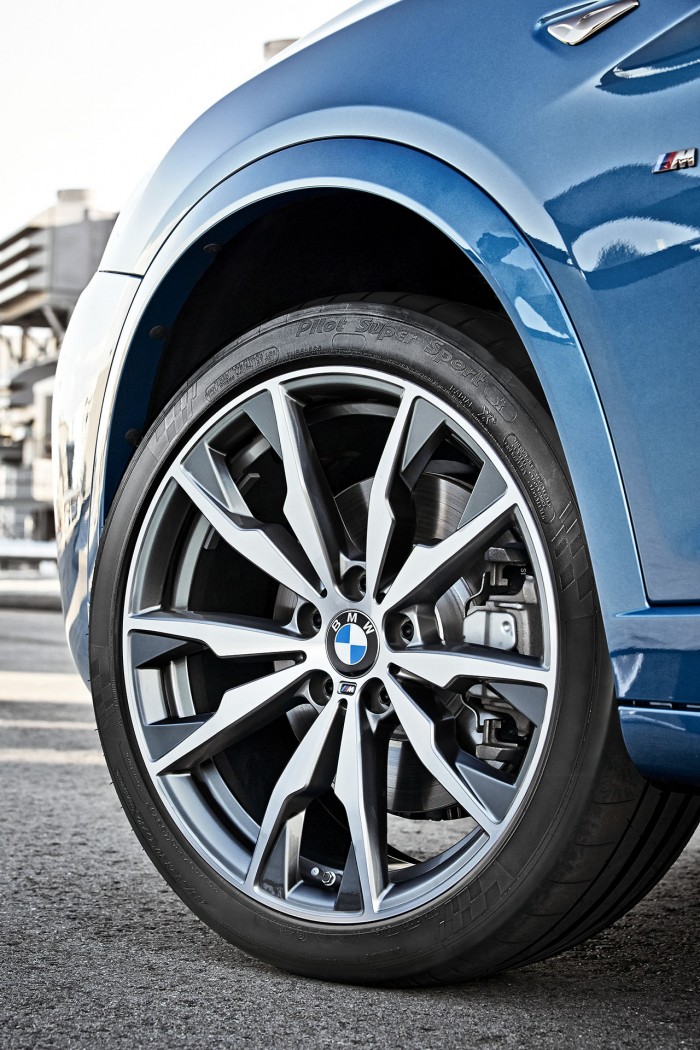 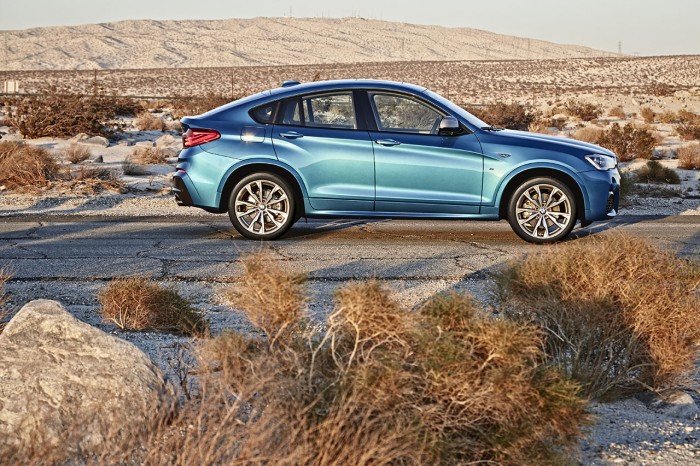 The stretched, powerful lines of this Sports Activity Coupe are further emphasized in the new BMW X4 M40i with selectively applied Ferric Gray metallic accents, that clearly sets this vehicle apart from the other BMW X4 models. For example, the exterior mirrors as well as the vertical slats of the famous BMW kidney grille are painted in exclusive Ferric Gray metallic. The same color also adorns the new aero design element in the large air intakes located on the far outer edges of the front apron. In addition, the exclusivity of the BMW X4 M40i is subtly underlined by the model lettering in chrome.

From the rear, the new BMW X4 M40i is immediately recognizable. At first glance, the wide, flat rear end with the L-shaped LED rear lights and the aggressive diffuser optics affirms the vehicle’s excellent driving dynamics. Two tailpipes are mounted on the left and right at the rear and the sport exhaust system finished in Black Chrome also suggest the extraordinary performance potential of the BMW M Performance model which is confirmed by the powerful sound of the engine.
The extroverted appearance of the new BMW X4 M40i is supplemented by the exclusive, optional 20-inch M double-spoke light-alloy wheels in two-tone Ferric Grey metallic, with highly polished, sculpted faces. Together with the characteristic two-part contour line, the muscular flanks and the accurately modelled C pillars, these illustrate once again the excellent dynamic credentials of BMW M Performance automobiles. 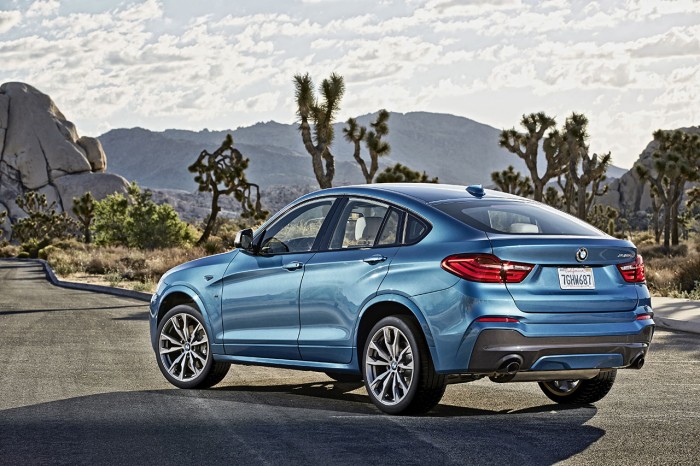 The sporty, exclusive interior of the new BMW X4 M40i also emphasizes its typical BMW M Performance pedigree. The door sills bear the “X4 M40i” lettering, which also appears on the instrument cluster when the vehicle is unlocked and remains visible when driving. Navigation instructions and vehicle status messages are superimposed over the lettering as required. This dynamic impression is rounded off by the new standard M leather steering wheel with shifter paddles and the M logo on the selector lever of the 8-speed STEPTRONIC Sport automatic transmission. 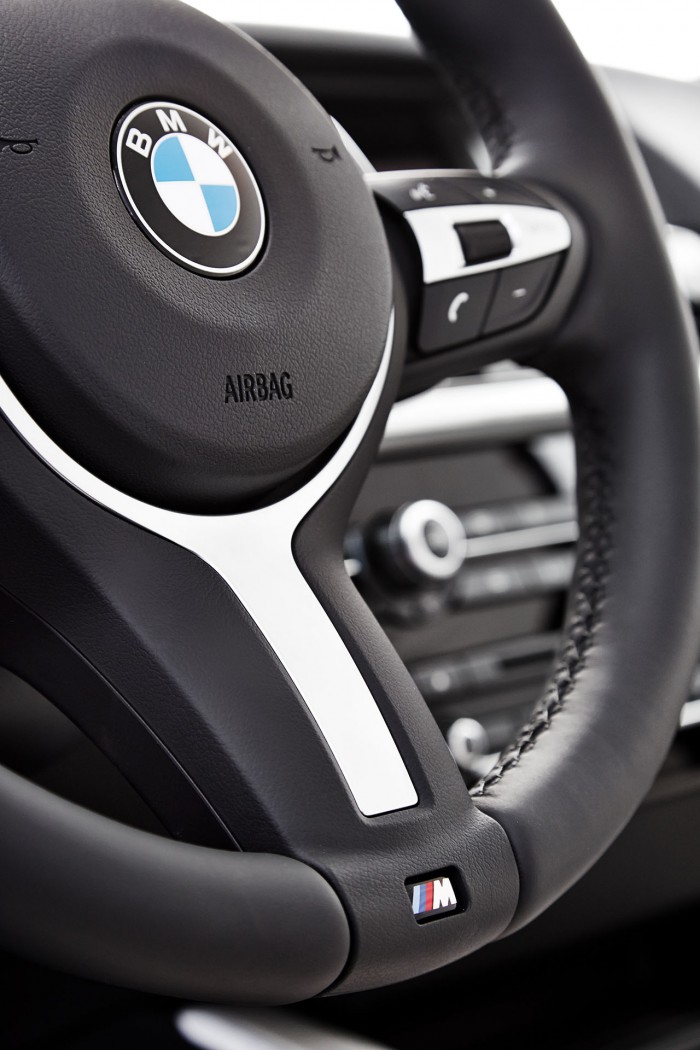 With an array of BMW ConnectedDrive options on offer, including a full-color head-up display, the new BMW X4 M40i also provides all the benefits that result from comprehensively networking the driver, vehicle and the environment.
Other ConnectedDrive features such as the Active Driving Assistant + ACC Stop & Go including Lane Departure Warning, Forward Collision Warning, Pedestrian Warning and City Collision Mitigation are available as optional equipment. BMW Online and BMW Apps, available with the optional Navigation system and in the Technology Package provides access to the intelligent vehicle networking of the driver, vehicle and environment. Innovative services such as Real-Time Traffic Information system (RTTI) can be accessed via the permanently installed SIM card. Apps and extensive on-line applications are also available when Navigation or Technology Package are equipped.

The Intelligent Emergency Call is also standard equipment on the BMW X4 M40i; its scope and capabilities have made it a world leader in the automotive sector. The system not only reacts when assistance is manually requested, but it also activates automatically. In the case of an accident, the Intelligent Emergency Call sets up a connection to the BMW Interaction Center via the SIM card which is permanently installed in the vehicle; staff then make direct contact with the occupants. At the same time, vehicle location and the potential risk of injury to the occupants of the vehicle are transmitted to ensure a quick rescue response, even if no one in vehicle is able to answer.

The BMW X4 Concept Makes its Debut in Shanghai