Monthly sales continue their downward slide for BMW, dropping 7.4% compared to April 2015, to a total of 24,951 units delivered. Year-to-date is off almost 10,000 units from last year’s pace, representing a drop of 9.4% compared to 2015. Continued low US fuel prices (that typically result in strong growth in full sized pick-up trucks) along with the public’s insatiable desire for SUVs and CUVs continue to haunt BMW that has a very sedan-heavy portfolio. In context, April light vehicle sales in the US were up 4.2%. BMW underperforms Matt’s Luxury Index as well. The MLI is about flat for the month (Updated to include Porsche sales numbers). Luxury cars in general are all feeling the heat, but BMW is feeling it more than most. 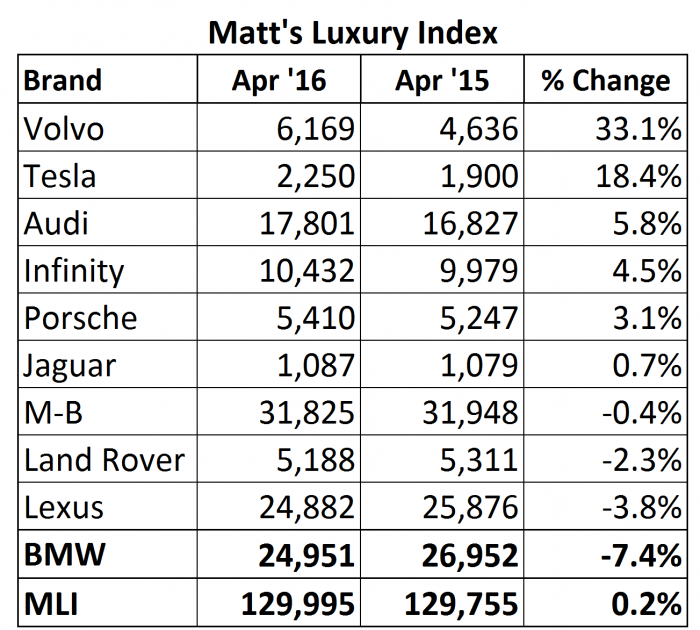 Despite this trend, there are a couple of bright spots. World-wide, BMW is doing very well, with record sales and profits. Back here in the US, the 2-Series is up significantly and the X1 seems to be particularly well received, despite it’s front wheel drive roots. Also of note is that total BMW US pre-owned sales set an April record at 19,054 units, equivalent to 76% of new vehicle sales. Much of this is driven by vehicles returned at end of lease. But maybe some buyers are noticing that you can find a few zero-mile “used” cars at significant discount.

“April is always a volatile month for BMW with model changeover taking place in some of our very popular X models, and the improving consumer confidence that typically follows the arrival of Spring still developing,” said Ludwig Willisch, President and CEO, BMW of North America. “The numbers for the BMW 2 Series and the BMW X1 show the very strong following our smaller vehicles continue achieving and I expect our high demand X models to show gains as availability improves in months ahead.” 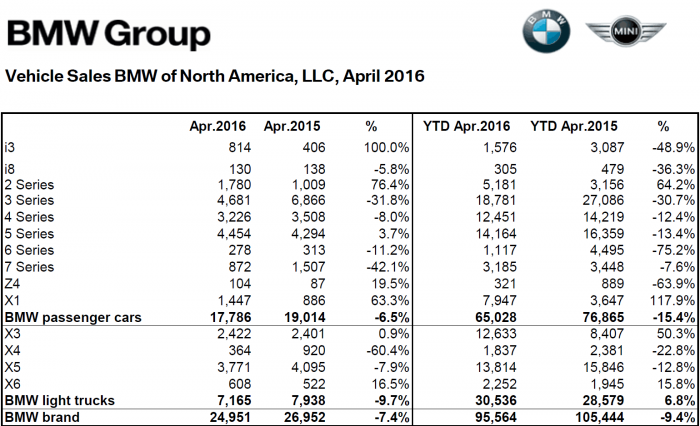