Big congrats from BimmerFile to BMW Performance Driving School M2 team for winning their class and finishing in 10th overall!

Official Release: The 2016 Tire Rack Brock Yates One Lap of America presented by Grassroots Motorsports is in the books and the BMW Performance Driving School Team of Mike Renner and Steve Maguire had an excellent run to 10th overall and 1st in Stock Touring and SSGT1- Small Bore Classes in their BMW M2 sponsored by BMW M Performance Parts and IHG Rewards Club.

The rules for the stock class stipulate no modifications are allowed, only manufacturer accessories may be added, and suspension geometry or engine modifications are prohibited. Therefore, our BMW M2 was configured exactly as you could purchase from your local BMW Dealership with the addition of a few BMW M Performance Parts, including; Front Splitter, Black Grilles, Side Planes, Rear Spoiler, Rear Apron, Exhaust with Carbon Fiber Tips, Adjustable Coil-Over Suspension, and M Body Stripes.

The event started from Tire Rack’s headquarters in South Bend, Indiana a long time presenting sponsor of the event and provider of specially marked tires. Each competitor can only use a maximum of four tires unless a replacement is deemed necessary for safety reasons by the organizers. Also the tires provided by Tire Rack must be original equipment with a minimum tread wear rating of 140. On arrival crews passed through registration and tech inspection to make sure cars were road worthy and crews mostly sane!

This year’s event would visit tracks in the Eastern and Midwestern states over a period of eight days and cover over 2,800 miles with competitors experiencing skid pads, autocross, drag strip, and six race tracks during the event. The variety of cars at the start was amazing, GTR’s, Vettes, Vipers, Porches of various nomenclature including a 918 Spyder, plenty of BMW’s, and even a couple of Crown Vics and an Aerial Atom! 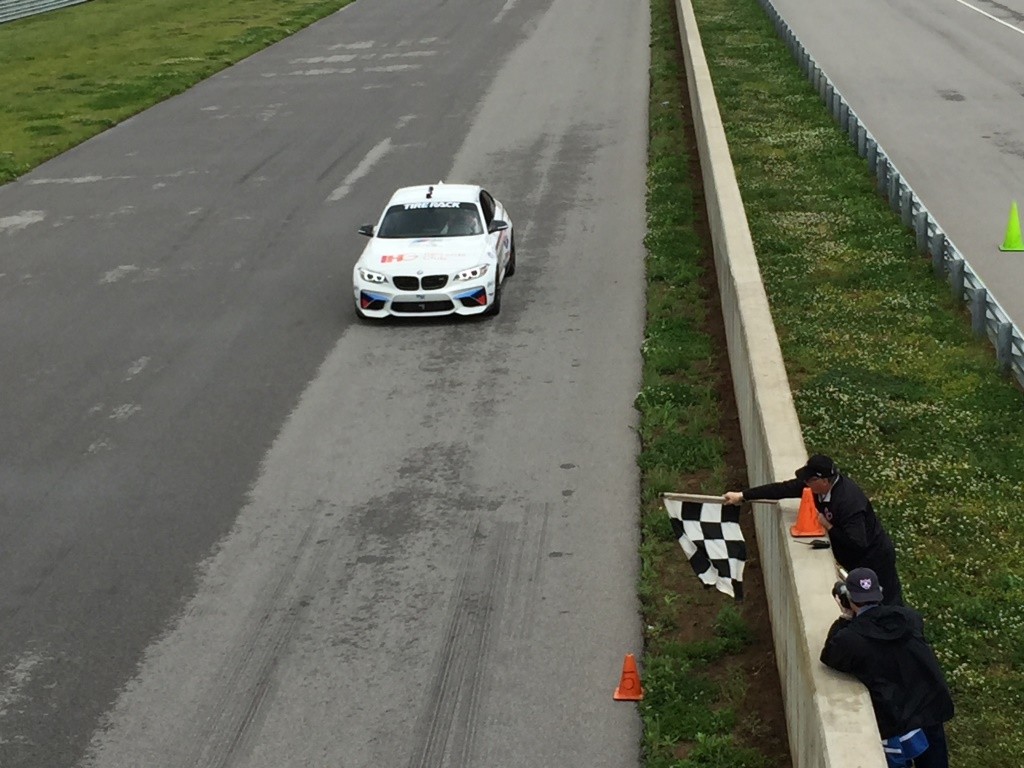 The first competitive event was the wet skid pad at Tire Rack, with not only the sprinklers the wetting surface, but a significant downpour made sure there was standing water to also navigate. Competitors ran two laps in a clockwise direction followed by two laps in the opposite direction with the average G load calculated to determine the winner. Mike ran an excellent 5th overall with a 0.751 G’s beaten only by an Audi TT RS, a Porsche 997TT, a Nissan GTR, and Porsche GT3!

As soon as our run was completed we loaded up the M2 with all our baggage and safety equipment and headed east to Lake Erie Harley Davidson for a passage control and a quick bite to eat, then is was towards Pittsburgh for a few hours’ sleep at the Holiday Inn. Throughout the week our typical routine was to arrive at our Holiday Inn around 11:00pm, catch some shuteye, breakfast at 6:30am with wheels up and heading to the track by seven.

Our first track was Pittsburgh International Raceway, formally Beaverun. The owners have invested heavily in the facility with a new extension, creating a 2.8-mile configuration.

At each track we typically run two sessions separated by a lunch break, with each session covering three timed laps from a standing start. Teams will arrive early to walk the track becoming familiar with the geometry and terrain. It helps to do some preliminary homework prior to the event to learn tracks through watching videos or analyzing available track data.

As we brought the M2 onto pit road the heavens opened and soaked the track, handing a big advantage to the AWD vehicles, but playing into our hands against the high horsepower 2WD cars. Mike completed his run in 6:37.476 minutes for ninth overall, while on a drying track in the afternoon he came home 10th overall. We knew the BMW M2 would be competitive, but were surprised just how well the car was performing against some very strong opposition.

It was now time for one of the longest transit sections of the event 557-miles; Pittsburgh, PA to Ware, MA for Mondays’ time trails at the recently opened Palmer Motorsports Park. This track has to go on your bucket list. You have never seen the configuration of a track built into the side of a mountain, big elevation changes, challenging corners, and engine sounds rattling off rock walls make this a totally unique experience. Watching a video of this place does not do it justice!

As has become the norm for the 33rd running of the event, rain was present offering drivers and additional challenge to navigating the track. An eighth place finish in the morning followed by ninth in afternoon solidified our place in the top ten overall along with Nissan GTR’s, Porsches of various configurations, an Ariel Atom, and a couple of heavily modified BMW M3’s.

Back on the road we were heading south to Summit Point, West Virginia, a mere 465-mile drive for Tuesdays track challenge. Though there was a potential threat of rain through the morning, we were blessed with a dry day for a change. Summit Point is a 10 turn 2-mile road course with a2,900 ft. main straight which means the Porsches, Vipers, GTR’s, Vettes, and McLaren should rule, and they did, but we bagged 11th in the morning and 13th in the afternoon. Another great result for our BMW M2 ably piloted by Mike who left nothing on the table.
After Summit Point we headed west for the longest transit section of the week; 603-miles, heading over the Appalachians to National Corvette Museum (NCM) Motorsport Park in Bowling Green, KY. Though an arduous drive the scenery was breathtaking, too bad we didn’t have time to stop and take in the beautiful views.

Wednesday morning was dry for a majority of the first runs, but towards the end of the session rain once again soaked everyone and left the front runners in the afternoon session at a disadvantage to the latter runners. Like Summit Point and tomorrows time trails at Road America, the configuration of NCM favors the higher horsepower cars. Mike completed the morning run in 14th and finished the afternoon session in 25th in the wet. A drying track benefitted later runners.

From Kentucky we now headed north to Wisconsin and Road America for Thursday’s extremely busy schedule; two track sessions, an autocross and a drag race, plus a quick stop at the Brat Stop after leaving Great Lakes Dragaway.

So we had to travel to one of the most northern states to find warm weather and sunshine, and not a drop of rain in the air! Road America is an extremely fast track with long straights and fast corners, favoring our more powerful brothers. In first place was the Porsche 977TT with a time of 7:30.358 followed by eleven other cars with considerable more horsepower. Mike completed his morning run with a 8:10.566 over the three laps, good for 12th place!

Next it was onto the autocross held on the go-kart track full of twidley bits, slaloms, and tight turns. Each competitor had three runs with their fastest counted. Mike finished 15th with a 55.204 while the winning the highly modified Mitsubishi Evo IX completed the course in 50.560.

Autocross complete it was back to track activities with the afternoon session, and Mike continued to impress the competition with a 14th overall. Remember this is a stock BMW M2 mixing it up with much more powerful machinery.

From the Brat Stop we had a relatively short drive to Joliet in the evening, fortunately missing the Chicago rush hour(s) traffic and getting to bed at a decent hour. Throughout the week we have been fortunate to stay at some great Holiday Inn and Holiday Inn Express Hotels. Usually arriving close to midnight the receptionist has always greeted us with a smile on their face and a warm welcome. The rooms have been terrific; clean with comfortable beds and a variety of pillows to suit your preference. At each location our hotel has never been more than 30 minutes away from the track, many much closer.

Friday was the penultimate day of competition at Autobahn with a morning run on the north course followed by an afternoon session on the south course. Mike finished 10th overall in the morning with an 11th in the afternoon.

Back in South Bend, we enjoyed a good meal with the rest of the crews and had an early night as we had the final competition in the morning at Tire Rack, the dry skid pad, proceeded by the group photo of all remaining competitors.

At this stage we were just outside the top 10 and need to beat the current 10th place Audi TT RS by 8 positions if we were to take it away from them on points. Mike went out and secured a 0.985 G and beat the Audi by nine positions giving us 10th place.

So the final results not only showed an excellent overall position, but class wins in Stock Touring and SSGT1-Small Bore Classes. This is really a great testament to the engineers who developed the BMW M2 and of course to Mike Schnell Renner’s awesome driving talent. Throughout the week our BMW M2 ran perfectly, not missing a beat. While other crews we tinkering with their car, all we had to do was adjust tire pressures for the conditions and track, and clean the car.
We love competing on this event, the unique and comraderie

BMW Motorsport and Akrapovič Step up their Partnership