Today BMW begins its next step in transitioning the N55 out of production. With this new generation of inline six cylinder engine (code named the B58) BMW is both increasing fuel economy and performance. The manual M240i for instance does 0-60 a tenth of a second quicker than the M235i. Additionally BMW claims a 7% fuel economy increase across the board.

The official release goes into plenty of technical detail below. Highlights include the addition of a electric turbo wastegate control, an on-demand cooling pump and a map-controlled oil pump. Having experienced the B58 in the new 3 Series we can attest to it as being a clear advancement over the N55 in not just performance and efficiency but also feel under foot.

Official release: Today, BMW announced the new 2017 BMW 2 Series now featuring the latest generation of BMW TwinPower Turbo 4-cylinder and 6-cylinder inline engines. The advances in dynamics and efficiency in these new vehicles are communicated by the new model designation. The new BMW 230i Coupe and BMW 230i Convertible are powered by the latest generation 4-cylinder 2.0 liter engine featuring an even smoother power deliver and efficiency with increased horsepower and torque, 248 hp and 258 lb-ft. The M Performance Model with the new BMW M240i Coupe and BMW M240i Convertible feature a new inline 6-cylinder gasoline engine that develops 335 hp, a 15 hp increase in maximum output over its predecessor. The new engine has an impressive 369 lb-ft of torque, 39 lb-ft more than before. The 3.0-liter unit with further developed M Performance TwinPower Turbo technology is a product of the BMW Group’s latest engine generation. This new engine produces the same performance levels as the sought after 2011 BMW 1 Series M Coupe. With an acceleration time of as little as 4.2 seconds from 0 to 60 mph, it is 0.2 seconds quicker than its predecessor. The BMW M240i Coupe and BMW M240i Convertible are fitted with the latest generation of the 8 speed Steptronic Sport Automatic transmission as standard and rear wheel drive models are also available with a six-speed manual gearbox as a no cost option. These M Performance vehicles as an alternative to sending their power to the rear wheels can also be ordered with BMW xDrive intelligent all-wheel drive. Prices for these models will be released closer to its market launch this summer. 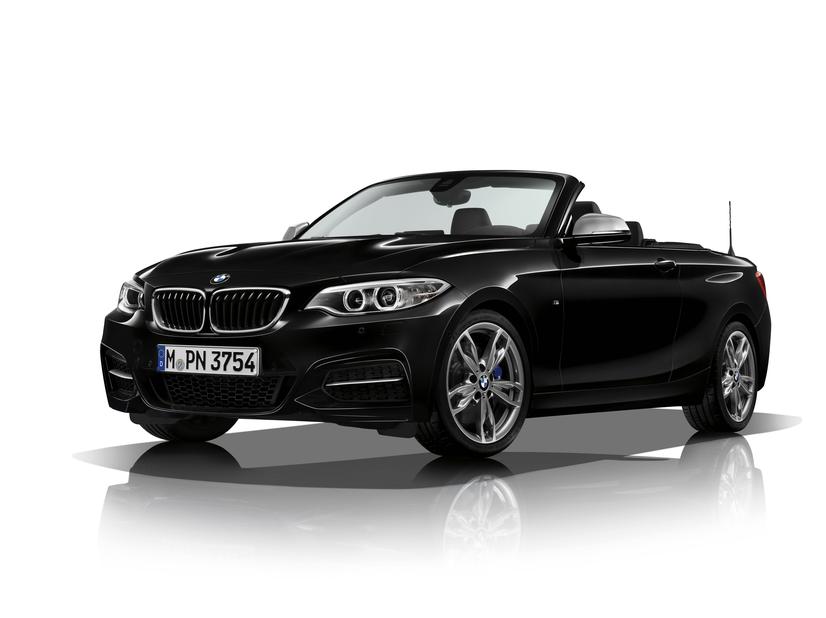 The new 6-cylinder inline gasoline engine with M Performance TwinPower Turbo technology.
The engine developed for this duo of compact power merchants stands out from the crowd with its instantaneous responses, high-revving liveliness and exemplary efficiency. Its linear power delivery is accompanied by a beautifully intense take on the emotionally rich engine sound characteristic of a classic and inherently balanced BMW inline 6-cylinder. The new unit has an aluminum crankcase and cylinder head and the refinement that is a hallmark of BMW 6-cylinder inline engines has been elevated to another level thanks to new acoustic shielding. The twin-scroll turbocharger integrated into the steel exhaust manifold and electric wastegate control is extremely efficient – on account of its compact construction and the presence of an indirect intercooler integrated into the intake manifold.

A key element in the new engine’s ability to serve up thrillingly dynamic acceleration is the pulling power that comes on tap early and is maintained over a wide rev range. The new unit lays on peak torque of 369 lb-ft between 1,520 and 4,500 rpm and generates maximum output of 335 hp at 5,500 rpm.

The latest generation of VALVETRONIC fully variable valve control provides particularly precise load control, enhancing the engine’s responsiveness and efficiency. Rounding off the latest update of M Performance TwinPower Turbo technology is Double-VANOS variable camshaft timing on both the intake and exhaust sides. Also doing their part to seal the exceptionally fine balance between driving pleasure and fuel consumption for this output class, are an electric coolant pump for the intercooler that operates only as necessary, a map-controlled oil pump, Electric Power Steering, the Auto Start Stop function, Brake Energy Regeneration and various other solutions developed by BMW EfficientDynamics.

The extra dynamic potency heralded by the further developed powertrain technology is reflected by significantly improved acceleration values. The BMW M240i Coupe powers from 0 to 60 mph in 4.6 seconds (automatic: 4.4 seconds) – or truly impressive 4.2 seconds in all-wheel-drive guise. Those figures represent an improvement of 0.2 seconds in both cases.

The latest-generation 6-cylinder inline engine is combined with the latest version of the 8-speed Steptronic Sport Automatic transmission. This improved transmission, with its wider gear spread also has further improved internal efficiency. The option of carrying out multiple downshifts opens the door to more dynamic gearshifts and particularly swift responses to movements in the accelerator. The 8-speed Steptronic Sport Automatic transmission provides top-class shift dynamics featuring a Launch Control function delivering traction-optimized acceleration off the line

BMW US Sales Down Slightly for July