The new 3.0-litre six-cylinder in-line engine was developed on the basis of the BMW Group’s latest generation of power units. Its BMW TwinPower Turbo technology includes multi-stage turbocharging with four turbochargers and common-rail direct injection, the latest update of which generates maximum pressure in excess of 2,500 bar. These and other technological highlights allow significant improvements to the already exceptional power delivery, pulling power and efficiency achieved by the outgoing engine. The new BMW 750d xDrive accelerates from 0 to 100 km/h / 62 mph in 4.6 seconds (BMW 750Ld xDrive: 4.7 seconds) – an improvement of 0.3 seconds over its predecessor. Much credit for this even sharper dynamic edge can go to a new form of multi-stage turbocharging, which now brings together four turbochargers in place of the previous three. This enables boost pressure to be built up even more quickly at lower engine speeds and therefore prompts incredibly swift responses to throttle applications from idle. 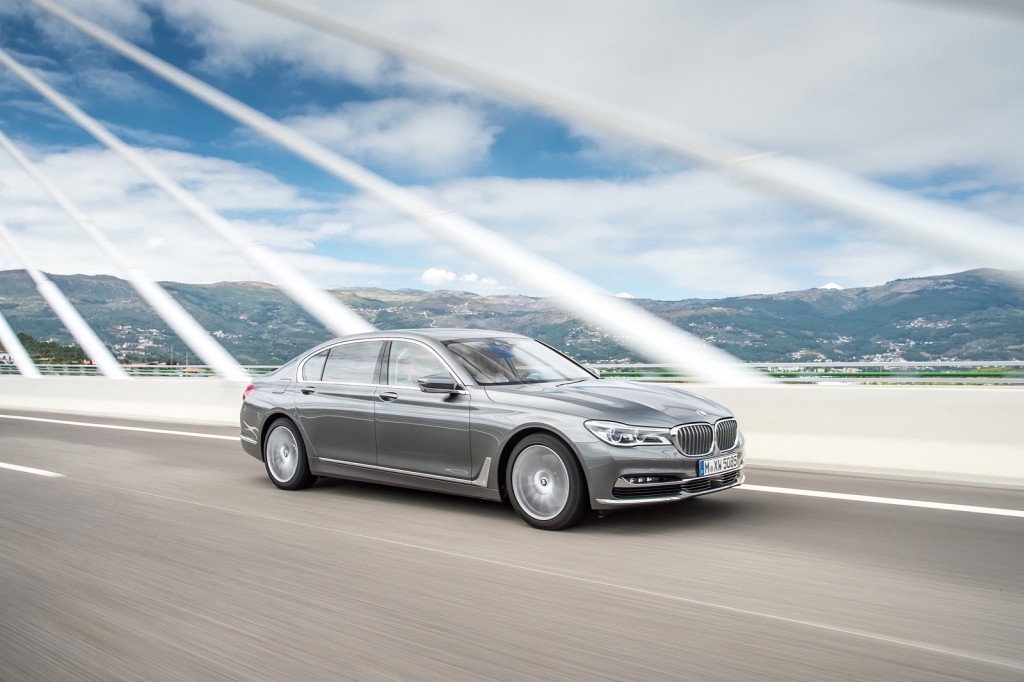 Top-level efficiency: engine output up 5 per cent, average fuel consumption down 11 per cent.

The new generation of the world’s most sportingly gifted six-cylinder diesel engine develops its maximum output of 294 kW/400 hp at 4,400 rpm. Its optimised performance characteristics are reflected most prominently in torque development that gathers pace rapidly and from low engine speeds. Indeed, the engine serves up over 450 Newton metres (332 lb-ft) of torque at just 1,000 rpm and puts its maximum 760 Newton metres (560 lb-ft) on tap between 2,000 and 3,000 rpm. The engine’s large and sustained wave of thrust and the eight-speed Steptronic transmission tuned to make the most of it together ensure that instant and ferocious bursts of pace can also be achieved under throttle inputs at higher speeds. The BMW 750d xDrive and BMW 750Ld xDrive have an electronically limited top speed of 250 km/h (155 mph).

Added to which, the most powerful diesel engine ever offered by BMW also stands apart with a balance of brawn and fuel economy unmatched by any rival in this engine segment. A 14 kW/19 hp (i.e. 5 per cent) increase in output and peak torque up by 20 Newton metres (15 lb-ft) are accompanied by a 11 per cent reduction in average fuel consumption and emissions over the predecessor model. The new BMW 750d xDrive and new BMW 750Ld xDrive record combined fuel consumption of between 5.9 and 5.7 litres per 100 kilometres (47.9 – 49.6 mpg imp), while CO2 emissions are 154–149 grams per kilometre (figures based on the EU test cycle, may vary depending on the tyre format specified).

The new sporting king in the diesel ranks represents a masterful example of the engineering art and further evidence of the BMW Group’s outstanding expertise in drive system development. A host of innovative features in the engine’s construction have enabled the signature benefits of diesel engines in terms of power delivery and efficiency – underpinned by the principle of combustion under extremely high pressure – to be showcased at the highest level. Essential foundations had already been put in place in the development of the base engine, a member of the BMW Group’s latest generation of drive systems. Specific detail solutions address both the thermal and mechanical loads that come with extremely high outputs and the increase in maximum combustion pressure – from the previous engine’s 200 bar to 210 bar.

As with the outgoing unit, the cylinder head and crankcase are manufactured in a special high-pressure compression process. Hot isostatic pressing (HIP) ensure the aluminium castings are particularly strong. The assembly of the main bearing caps and cylinder head is based on a tie rod concept, complete with a central screw to give extra strength. Other special features include the now five-layer cylinder head gasket, cylinder bores with a twin-wire arc-sprayed coating and pistons made from an aluminium/silicon alloy with remelted bowl rims, bronze liners in the pin eyes and centrally controlled cooling. 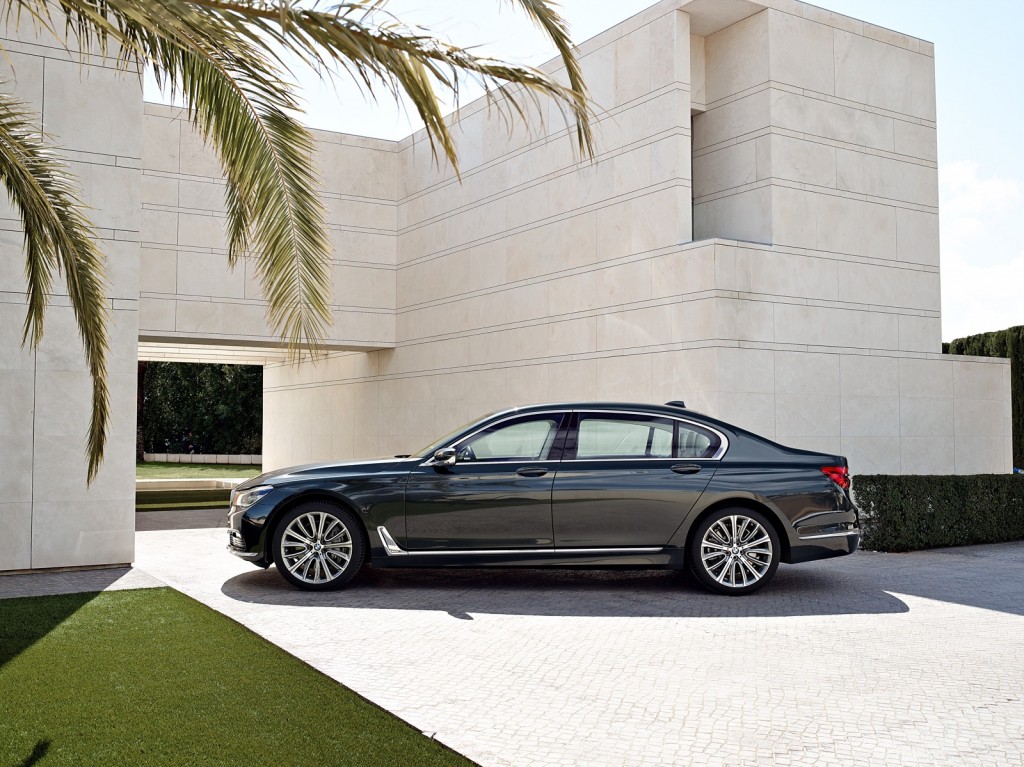 The latest generation of common-rail direct injection technology takes care of the fuel supply. The piezo injectors, whose maximum injection pressure has been increased to over 2,500 bar, ensure extremely precise metering and fine atomisation of the fuel. As a result, the engine’s efficiency has increased and its emissions have been reduced. The exhaust treatment technology at work in the BMW 750d xDrive and BMW 750Ld xDrive includes not only a diesel particulate filter and NOX storage catalytic converter, which are positioned in a combined housing close to the engine, but also an SCR (Selective Catalytic Reduction) system with AdBlue injection.

The effectiveness and performance characteristics of the new engine are determined largely by the first ever use of a fourth turbocharger and, above all, the precisely coordinated interplay of all the components in the turbocharging system. As with the outgoing engine, the performance-boosting flow of compressed air into the combustion chambers is generated by multi-stage turbocharging. The high-pressure stage revolves around two compact turbos with variable turbine geometry integrated into a single housing, while a single, very large low-pressure turbocharger has been replaced by two smaller – and therefore faster-responding – units. The latest-generation Digital Diesel Electronics (DDE) responsible for engine management adopt a precisely defined deployment strategy to coordinate the activity of the individual turbos, the position of the high-pressure system’s variable vanes, and the regulation of the change-over and bypass flaps, the exhaust gas butterfly valve, the wastegate and the intercooler in response to the operating situation and throttle inputs.

Another new feature not present in the outgoing engine is exhaust gas recirculation for the low-pressure stage of the turbocharging system as well as the high-pressure stage. This measure increases the effectiveness of the turbochargers and therefore of the engine as a whole. In this way, levels of nitrogen oxide emissions under high loads are also reduced. To enhance efficiency, the engine also employs an indirect system of charge air cooling with higher capacity than that used by the outgoing engine, as well as additional compressor backplate cooling for the low-pressure turbochargers. Key to the latter is a separate low-temperature circuit – independent of the engine’s cooling system – which includes heat exchangers and an electrically operated coolant pump.

What Did SCOTT26 Talk About This Week?