May numbers are in, and it’s a mixed bag for BMW. There were two fewer selling days this May compared to 2015, and that didn’t help either. Overall sales numbers for BMW were down 6.4% to 29,017 units delivered. But unlike the last several months, this is more in line with total US light vehicle sales that are down about 7%. The shining light through all this gloom is that X1 sales nearly doubled compared to May last year, rising 93% to 2,210 units delivered.

While Alexander Bilgeri, the spokesman for BMW North America, claimed that the decline in BMW sales, and luxury car sales overall, is somewhat due to volatility in energy and equity markets that disproportionally affect affluent customers’ buying decisions, BMW is near the bottom of Matt’s Luxury Index. 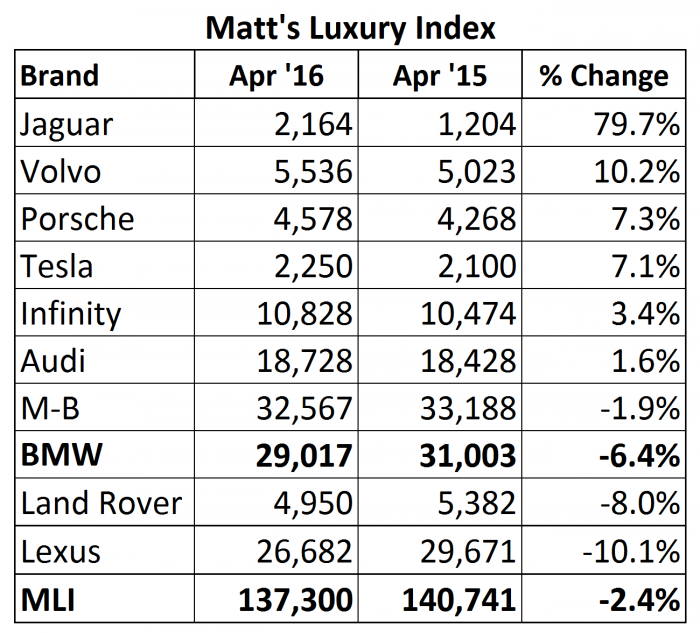 Another contributor to the sales decline this year is improperly forecasting model-specific demand at the end of 2015 which led to an abundant oversupply of 3-, 4- and 5-series sedans, with supplies of some models exceeding 90 days worth on dealer lots. This led to BMW having some of the highest incentives during May that are forecast to come in at just under $5,000 per vehicle sold. As the supply overhang is worked through, and the Spartanburg N.C. plant expansions comes on line toward the end of this year, BMW expects sales numbers to improve as the brand will be able to supply more X-variant that seem to be what the US buying public wants. 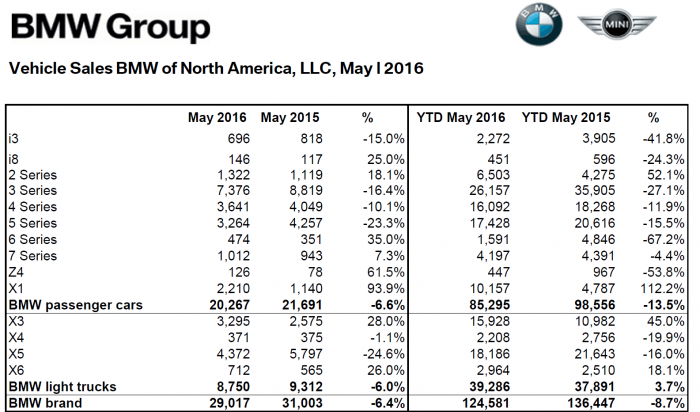 Sales of BMW Sports Activity Vehicles gave a boost to May with the new BMW X1 leading the way, increasing 93.9 percent, the BMW X3 increasing 28.0 percent and the BMW X6 increasing 26.0 percent.

“The shorter number of selling days in May no doubt affected the month totals but the ongoing transition to X models remains clear,” said Ludwig Willisch, President and CEO, BMW of North America. “The BMW X1 grows more popular each month with its siblings X3 and X6 giving it strong support.  The X5 was limited only by availability but that will continue improving in the months ahead.”

BMW pre-owned and MINI pre-owned vehicle sales.
BMW of North America is currently experiencing a technical issue which has delayed numbers for pre-owned sales.  Sales numbers will be added online once the issue is resolved.