BMW US July year-on-year sales dropped 4.4% to 25,777 units delivered. Despite the drop, it’s the first single digit percentage drop in monthly year on year sales for quite a while. An interesting twist is that despite the US buying preference shift to CUVs and SUVs, sedan sales were up in July while light truck sales dropped! This was driven by growth in all sedan series except the 3/4 series, that dropped from 10,919 to 8,985 units delivered for the month. 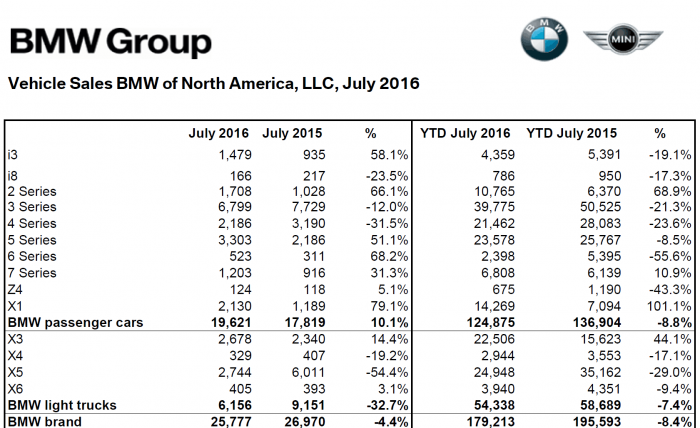 Overall, US light vehicle sales were up slightly (0.5%, ). Most automotive forecasters think that total sales this year will plateau at about last years levels, meaning that the 6 year bull market on light vehicle sales is pretty much done. Matt’s Luxury Index shows a much better picture, up 3.3%. The luxury leaders are Jaguar, up a shocking 174% and Volvo, up 52.8%. Both companies new model introductions appear to have invigorated the brands. BMW is in a statistical dead heat with Lexus at just over 179,000 units delivered year to date, but both are well behind Mercedes-Benz that has delivered a bit over 210,000 units. 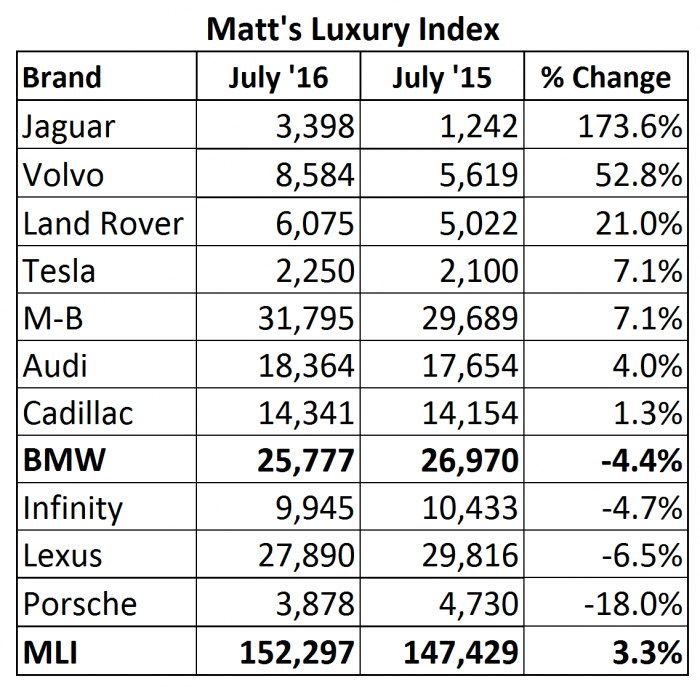 Used vehicles sales are particularly strong for BMW. This is for two reasons: The first is that more and more deliveries are via lease, and all these chickens are coming home to roost. While BMW leases a lot of new vehicles, this is a trend across many brands and used car inventory is very high, depressing prices across the whole industry. The second reason is that BMW did push dealers to take extra cars into dealer loaner fleets at the end of last year, and these cars are being sold as very, very low mileage used cars.

“The volatility that has characterized the 2016 sales year was clearly evident in the beginning of the third quarter,” said Ludwig Willisch, President and CEO, BMW of North America. “As we have seen through the early months of the year, the 2 Series and X1 have acquired a strong following and the 7 Series continues gaining ground.  At the same time, the global popularity of our X models continues to constrain our sales here in the U.S.”