It’s been pretty obvious that BMW US sales have underperformed expectations this year since narrowly winning the luxury sales crown for 2015. But while August was another down month (8% for the month, year-on-year) there does seem to be some light at the end of the tunnel. No, it’s not an oncoming train, but rather X-series headlights!

Many interviews with senior BMW personnel have noted the world-wide shift from sedans to CUVs and SUVs (this is especially true here in the US) wasn’t well served by the product mix offered in the US. But X-series production is increasing at Spartanburg, and the results are starting to show. 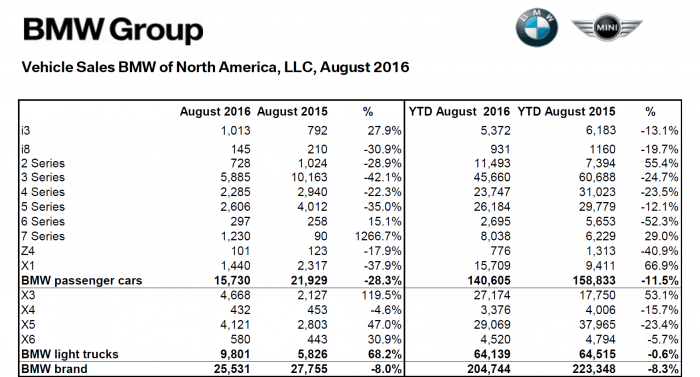 It’s also interesting to note that total used BMW sales surged by over 50% last month to just 1,111 units short of new car sales. Combined used and new car sales actually grew in August when compared to last year. There is lots of speculation about why this is happening. The consensus seems to be it’s mostly because many corporate sales are leases (as are end user sales). When these cars return, many get sold at the dealership via CPO and the used car channel.

Another piece of data that can be interpreted two ways is the incentives offered per new car sale. BMW had the highest in August ($5,760 per car sold, as reported by TrueCar), but this is also slightly lower than the July number, and since BMW average transaction price is much higher than the industry average, the incentive per dollar of sales is much lower than some other brands.

But some of the other ways of looking at BMW US August sales aren’t as flattering. BMW is at the bottom of Matt’s Luxury Index. Jaguar, Volvo and Land Rover seems to be doing the right things with the new product mix (and the F-Pace isn’t even selling yet). The rest of the luxury group is within 5% of the total light vehicle sales change (a drop of 3.6% overall). Overall, the industry is holding it’s collective breath to see if this year can exceed last years total sales. If you put all the industry forecasts in a bucket, it’s 50/50 if you’d find a prediction for growth or contraction. 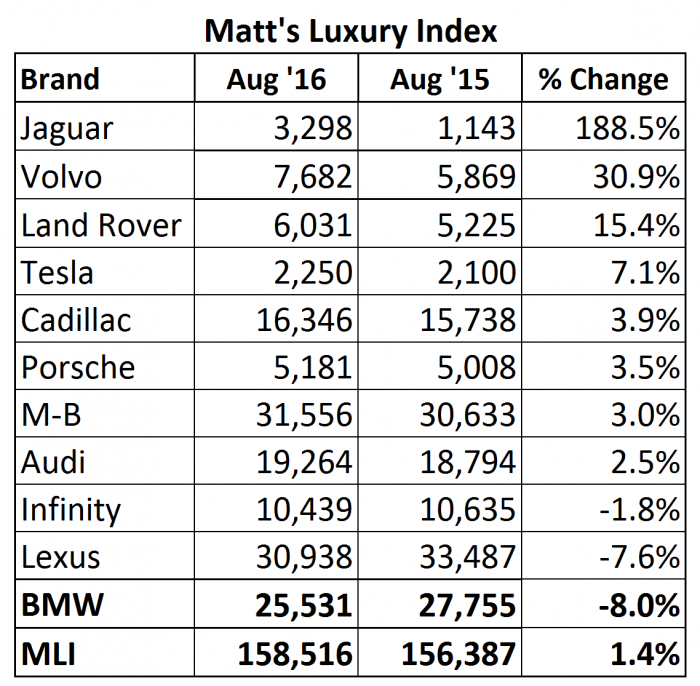 “The clear trend toward Sports Activity Vehicles took a good-sized leap forward in August, as our U.S. plant again increased production and availability of the always popular BMW X3 and X5 pushing total X model sales to 44% of BMW retail in the U.S. in August,” said Ludwig Willisch, President and CEO, BMW of North America. “With the production increase, I fully expect the key SAV numbers to remain strong in the U.S. through the end of the year.”