In a rooftop ceremony at the Peterson Automotive Museum, BMW Motorrad unveiled yet another new bike for 2017. This time, a bagger variant of its six-cylinder K1600GT mega tourer. Dubbed the K1600B, this new bike trades fairing for hips and aims to take on the bagger space invented and owned by Harley Davidson right now. 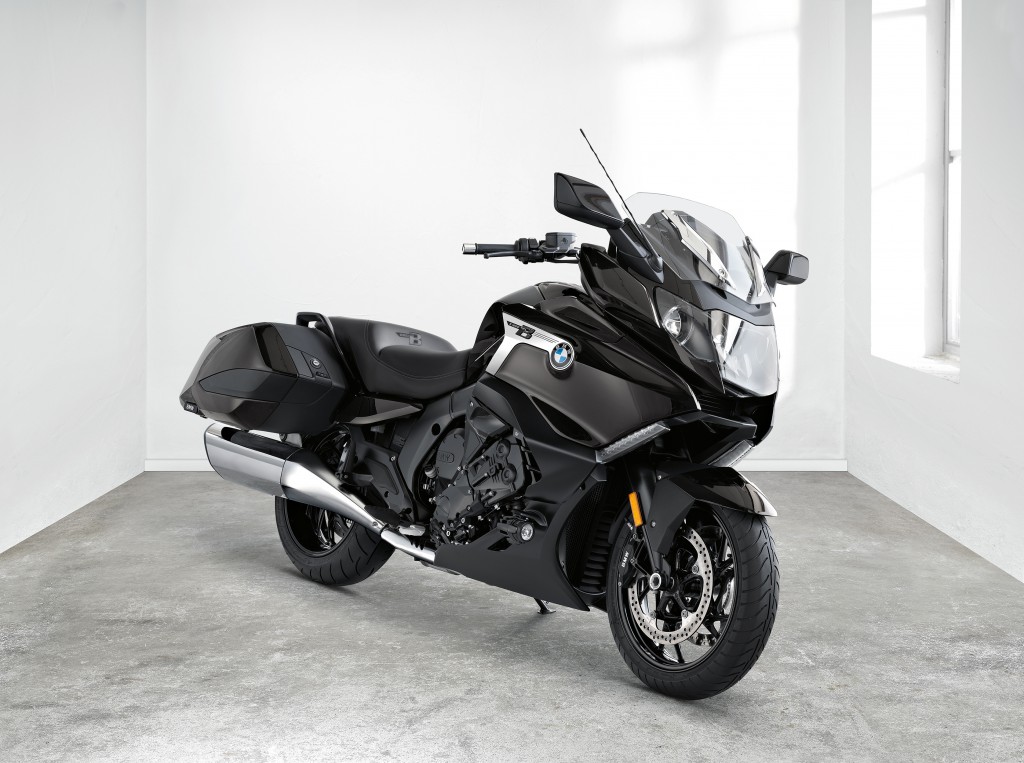 The display model of the K1600B that we saw was clad in all black. Black like the dark heart of whomever wants a bagger-type motorcycle that didn’t come out of Milwaukee. At first blush, the K1600B reminds me of Honda’s bagger variant of the Goldwing, the F6B. While I wouldn’t go so far as to say that the big BMW bagger is derivative of the F6B, the parallels are obvious. Both are heavyweight touring bikes designed with long distance, two-up riding in mind. Both sport 6-cylinder engines, and both are about as un-Harley as is possible for a heavyweight bike aimed at American riders. Yet seeing the K1600B in its black metal, it’s clear that BMW has chosen its own road, even in this segment.

While not actually any smaller than its K1600GT siblings, the K1600B looks more compact thanks to a trimmed front fairing. It’s not unlike how a BMW R1200RT looks weighty sitting next to an R1200RS, even though the two bikes are effectively identical in their basic dimensions. Likewise the standard R1200GS looks much smaller and more trim next to the R1200GS Adventure and its mile wide fuel tank. This mostly optical illusion on the K1600B lends the bike a bit of street cred in its appearance that the GTs never had. 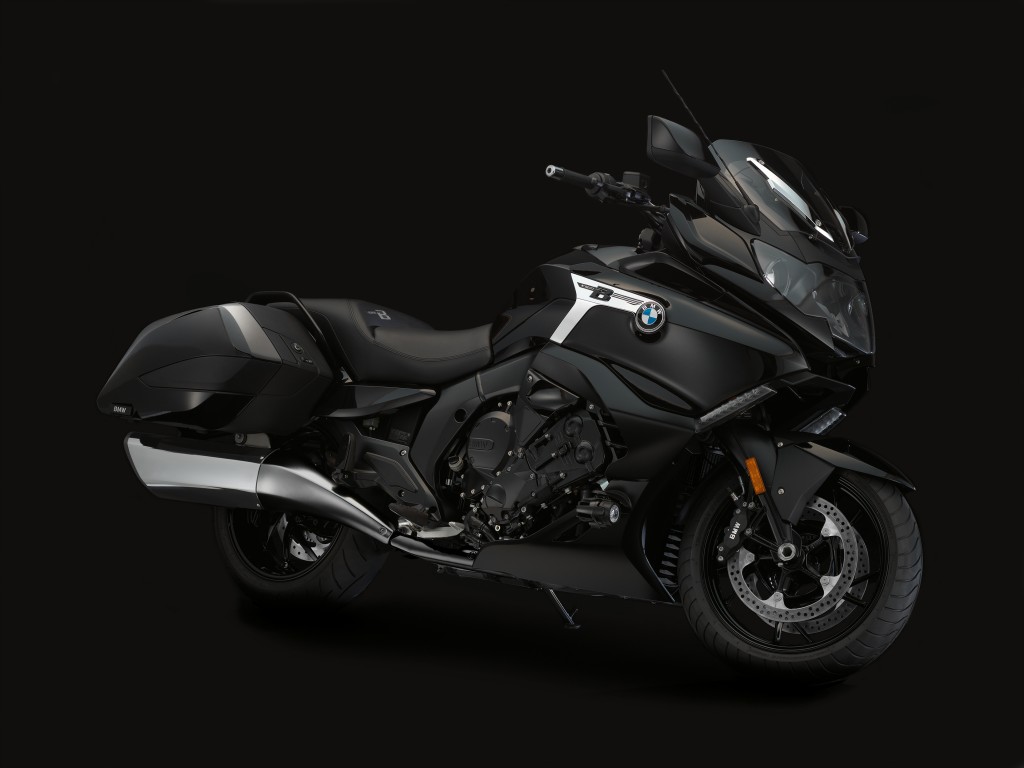 We didn’t get a chance to ride the K1600B as part of the unveil, so for now we’ll have to stick to aesthetics and positioning. For me, the strong points on the K1600B are in the details. For example, the tail lights integrated into the bike’s panniers look fantastic in person. There’s a cohesiveness to the K1600B that definitely sets it apart from its V-twin competitors. The industrial design of the bike flows together without being overwrought. It side steps the bolted-on feel that a lot of current baggers have — that inability to escape the old-fashioned motorcycle that’s still lurking under all that fairing, enormous panniers and obligatory airbrush flame paint job. The K1600B is unmistakably a bagger-style bike, yet in typical BMW fashion, it’s quite a bit more serious in tone. 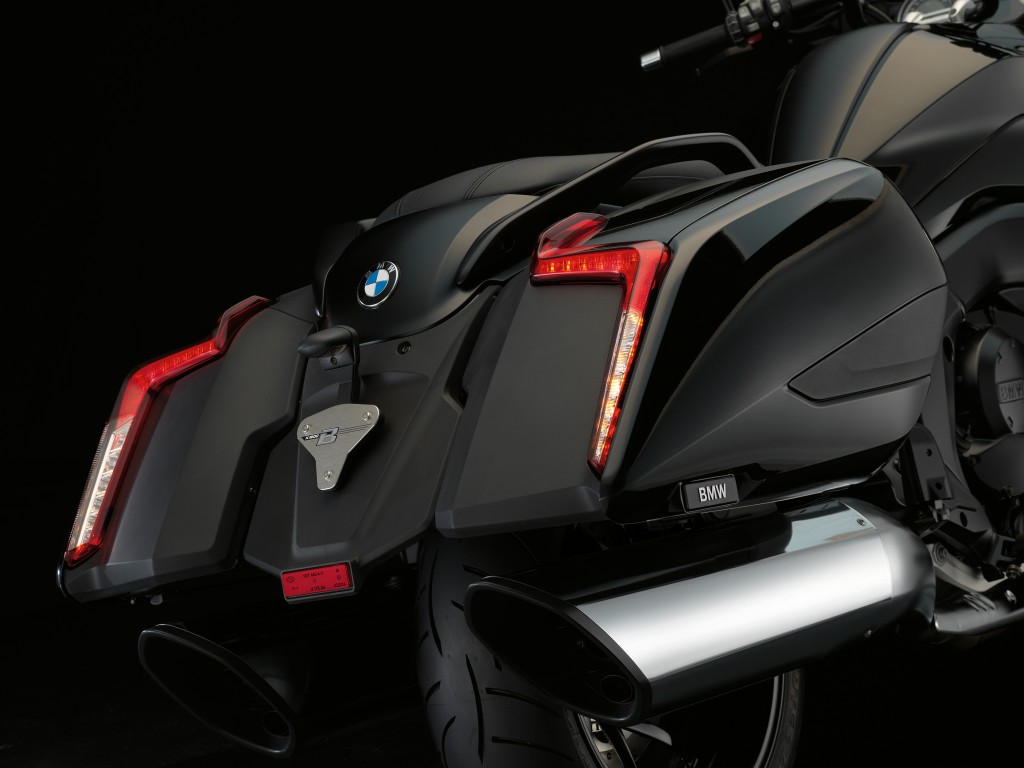 Head of BMW Motorrad Global, Stephan Shaller, told us during the unveil press conference that the K1600B was developed specifically with American riders and American roads in mind. With the USA set to surpass BMW’s native Germany as its top motorcycle market in the next 2-3 years, BMW is moving to align and diversify its product offerings to that future. While trying to out-Harley Harley is a strategy that’s failed miserably for many brands for three decades now (with the exception of Polaris’ reboot of Indian), that doesn’t appear to be BMW’s strategy here. 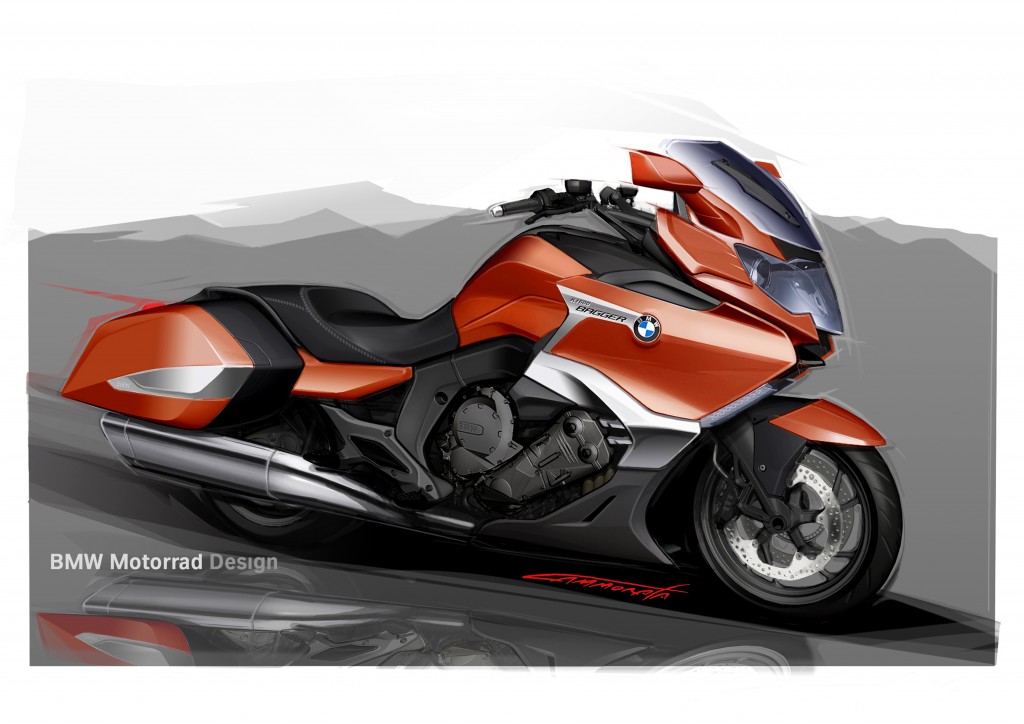 In the K1600B, we’ll still find all the technical advancement and overall refinement we’ve come to expect from BMW. This bike is really more of a packaging exercise. It feels like part of a larger initiative within BMW to continue to push the boundaries of technical expertise and execution, but to tell a different, more emotional story of what their bikes are about. Put another way, BMW will continue to design and produce technology-driven motorcycles, but the lesson they appear to have learned is that it’s the emotional connection that actually sells motorcycles. They appear to be trending toward a simpler motorcycling experience, even if under the covers the bikes are as technologically advanced as ever. 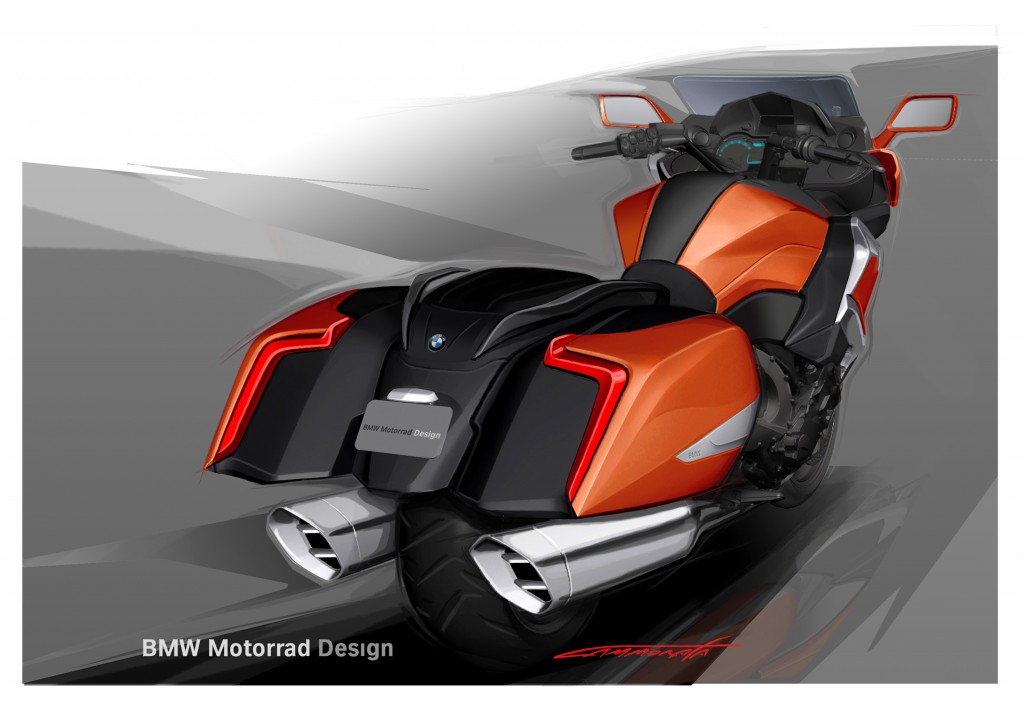 This downplay of the technical in BMW’s brand presentation, without sacrificing the actual technological core of their engineering, makes perfect sense. I think we’re going to see more and more how BMW will continue to push the engineering envelope, but the presentation of that technical achievement will perhaps be a bit more downplayed, and the focus will continue to shift to what that technology lets you do, and how the motorcycle makes you feel. I think that the ideal end game for this type of strategy is a motorcycling experience where the technology feels transparent and almost analog, as though it’s not even there.

“In America, a motorcycle is a leisure product” Shaller said during a press round-table later in the day. BMW recognizes that in the USA especially, no one is buying a premium motorcycle because they need to get to work, or because it will make their errands easier to run. Americans buy motorcycles for fun. They buy them for status. They buy them for a sense of adventure and freedom. I think recognizing and embracing that will only serve BMW going forward. 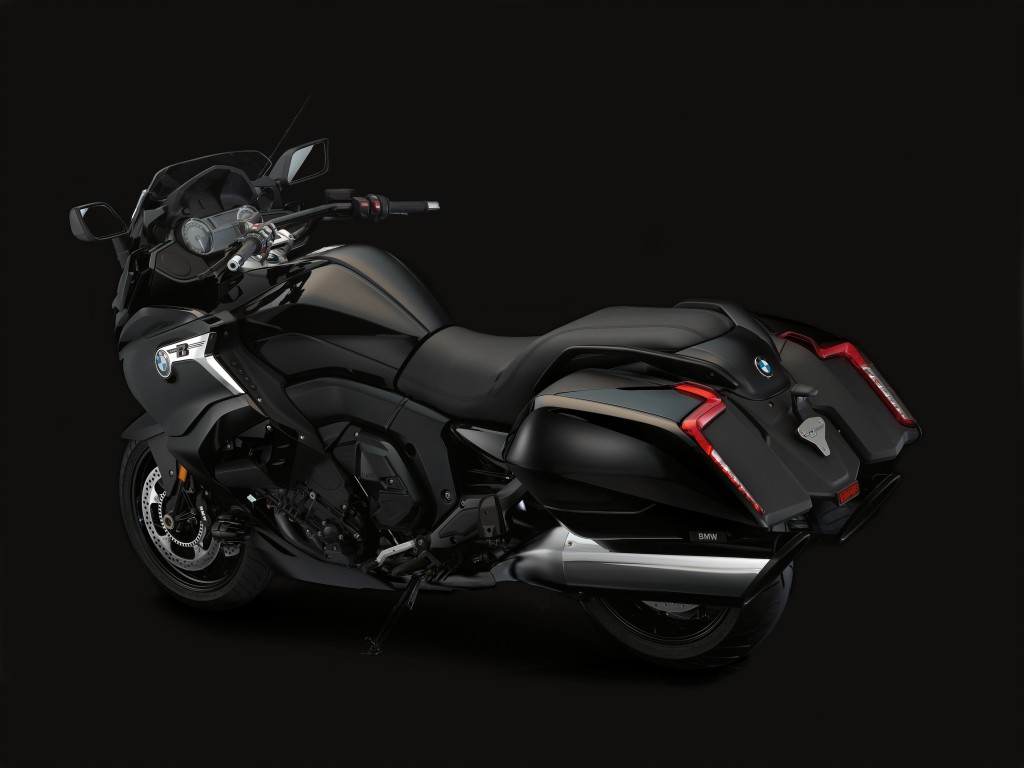 Back to the K1600B. I think that the story here is not what BMW has done, but rather what they’ve refrained from doing. They’ve taken an existing heavyweight platform in the K1600 and adapted it to a bagger style in a way that feels uniquely BMW. While they’re pursuing a market segment that’s very saturated and anchored in Harley Davidson, they’ve managed not to emulate HD in any derivative fashion. This seems like an obvious, strategic move, yet it’s a trap Honda, Yamaha, Kawasaki and even BMW have fallen into in the past. It’s the challenge of positioning a motorcycle to be seductive in cross-shopping against the market leader, without simply imitating. I think BMW have accomplished that here in the K1600B.

The K1600B manages something extremely difficult: it manages to be cool. It’s handsome in a way the GT simply isn’t. It’ll still be a stellar touring machine. Best of all, it’s not a Harley, nor is it trying to be.

The new K 1600 B: emotion and fascination with 6 cylinders in the exclusive Bagger style.

The presentation of the “Concept 101” concept study as part of the Concorso d’Eleganza Villa d’Este in spring 2015 was an impressive new chapter for BMW Motorrad in the history of BMW Motorrad Concept Bikes. This BMW Motorrad interpretation of motorcycling on endless highways, the dream of freedom and independence and the embodiment of “Grand American Touring” now becomes reality in form of a series version of the new K 1600 B bagger.

As a high-performance, highly emotional and exclusive motorcycle, the new K 1600 B with the familiar 6-cylinder in-line engine and supreme 118 kW (160 hp) output, like the “Concept 101” study that preceded it, already embodies the motto of the “Spirit of the Open Road”. It is synonymous with elegance, power and luxury on two wheels and transforms every road, every tour and every moment into a particularly intense experience.

In design terms, the new all-black (Blackstorm metallic / black for chassis parts and drivetrain) K 1600 B takes the form of a bagger, an exclusive custom bike type that is particularly popular in the USA. The characteristic properties of the bagger are its drop-shaped silhouette, whose highest point is the front fairing, the stretched drop-like silhouette in a “streamlining” style and the deep-set side cases with integrated US American style rear lights. New fully chrome-plated silencers run parallel to the road and are an organic fit for the visual appeal of the bagger.

Largely based on the technology used in the BMW 6-cylinder tourer K 1600 GT, the new K 1600 B implements its spectacular backward sloping linear design with a completely reconstructed rear section. This not only makes the bagger look particularly low-lying and slender, but also, thanks to the new rear frame, significantly reduces the height of the passenger seat.

Side cases with newly designed compartments and folding rear mudguard for easy dismantling of the wheel.

A re-design of the compartments in the side cases with slimmer covers and deeper body allows for particularly comfortable and effective loading of luggage. The rear mudguard has been designed to fold upward to make it easier to remove the rear wheel.

The fairing of the new K 1600 B with its closely tailored dynamic windscreen makes the motorcycle look particularly powerful and impressive. For especially effective wind and weather protection, the side sections of the wind deflectors are stretched further back. Wind deflectors protect the rider’s hands. The two mirrors also match the design concept, ensuring a particularly good view of the following traffic thanks to the large mirror surfaces with an aspherical element.

With the electronically controlled Dynamic ESA chassis and its “Road” and “Cruise” modes, the new K 1600 B combines riding comfort, stability and dynamic performance ensuring an incomparable riding experience. In the standard “Road” setting, damping adaptation is fully automated, offering the very highest level of comfort and ultimate traction on virtually all surfaces. In contrast, the new K 1600 B offers very gentle damping in “Cruise” damping mode, ensuing a very high level of comfort at low speeds.

New reverse assist feature for comfortable manoeuvring and Shift Assistant Pro for shifting up and down without activating the clutch.

The new K 1600 B is particularly easy to manoeuvre thanks to the reverse assist feature. This is activated conveniently at the press of a button on the left-hand handlebar panel. Pressing the starter button initiates movement.

The Shift Assistant Pro available as an option allows the rider to shift up and down without activating the clutch in a large number of cases.

A wide range of Original BMW Motorrad Accessories and options available ex works means that nothing is left to be desired in terms of the individualisation of the new K 1600 B. This includes the provision of comfortable foot rests for the passenger, while these elements can also be fitted to offer the rider a particularly relaxed “feet forward” position. Redesigned forged wheels with eleven double spokes each further enhance the exclusivity of the new K 1600 B.

An overview of highlights of the new BMW K 1600 B: