2016 is mercifully over for BMW NA. 2015 squeaked out a record year and a (somewhat disputed) Luxury Sales top finish. 2016 finished with a whimper, not a bang, and the brand has fallen significantly down 5.2% compared to December of last year, especially when one considers the competition. And this has to be seen in the context of the whole industry doing better in 2016 than 2015. To further put this in context, BMW NA is down 9.5% in annual sales, while VW, the Kings of Fraud, is only down 7.6%! While it’s true that the VW scandal hit more than a year ago, underperforming VW surely isn’t good news.

December had one less selling day, and one more weekend. These two effects tend to work in opposite directions for car sales. Total light vehicle deliveries rose by 3% compared to December 2015. However some of this growth is attributed to the manufacturers wanting another record year and paying for it with increased incentive spending. CUV/SUV/Light Trucks accounted for over 60% of the total, and this continuing trend didn’t help the brand that sells the Ultimate Driving Machine one bit. Matt’s Luxury Index basically echoed the light vehicle numbers overall, rising 3.2% for the month. 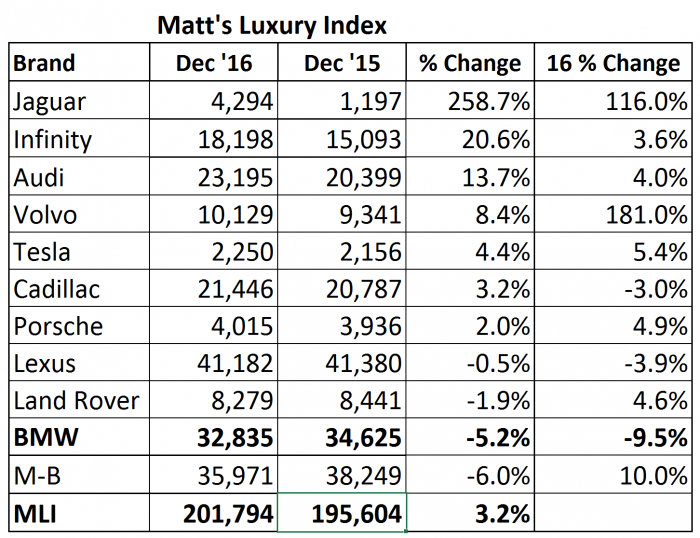 Compared to the other Luxury brands, BMW can be happy that Mercedes had a worse monthly growth number, but that means little as M-B cemented the Luxury Sales title for 2016. This is also somewhat due to BMW increasing sales incentives to a bit over $5.8k per vehicle, compared to M-B staying flat at about $4.6k. The month’s stars are Jaguar, Infinity, Audi and Volvo. The year’s stars are Jaguar and Volvo, both more than doubling annual sales. Jaguar even outsold Porsche in December! I wonder how many current Jag owners even understand the reference to “the Prince of Darkness!” My how times have changed.

All is not lost for BMW here in the US. The X1 has done very well, the X3 posted respectable annual growth and the new 5 series is about to launch. But there’s no denying that BMW has a tough row to hoe. Despite growth in the X-series offerings, BMW has no 3 row SUV, and the X4, X5 and X6, while excellent offerings, don’t seem to be attracting buyers the way that other brand’s SUVs seem to be. 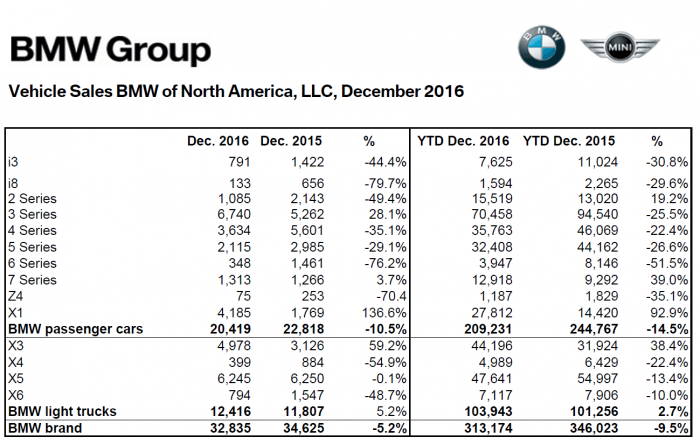 The crystal ball for next year is a bit murky. There is no doubt that US light vehicle sales have plateaued. Most industry prognosticators think that next year will be lower, as interest rates seem to be heading upward (hurting financing) and unsold inventories are growing (leading to even larger incentive spending or production slow downs). BMW does have some new offerings coming on line, but we’re not sure if it’s going to be enough to have a serious chance of getting BMW back to the number one position in Luxury Sales.

What does your crystal ball say? Sound off in the comments.