With a disappointing 2016 in the books, BMW is off with a sliver of good news to start the new year! January monthly year-on-year sales edged up a slim 0.1% compared to last year. When 2016 saw BMW USA drop from Luxury Sales Leader of 2015 to third behind Mercedes-Benz and Lexus, this sliver of growth is good news indeed. 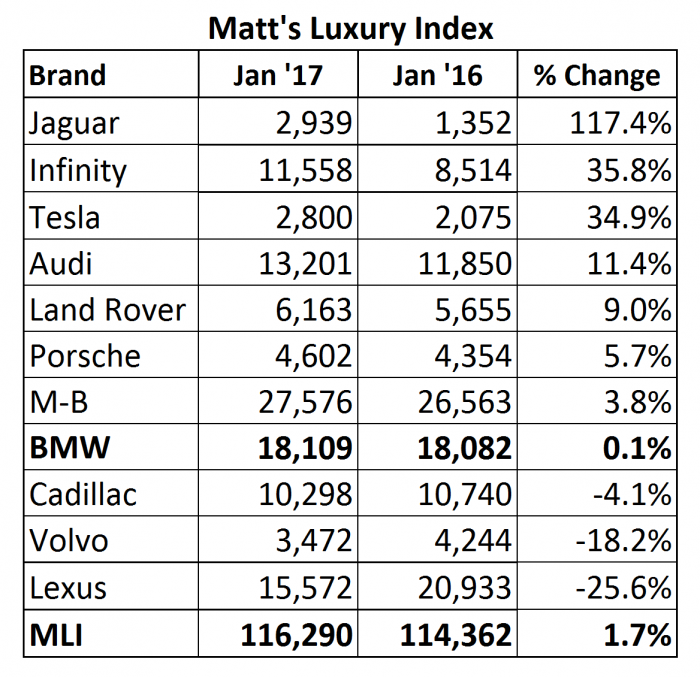 But looking deeper at the numbers, it’s a mixed bag. Yes, BMW outpaced Lexus in January deliveries (moving up one notch in Luxury Sales volume to 2nd), and outpaced the US light vehicle industry as a whole that dropped 1.9%. But Matt’s Luxury Index grew 1.7% in January and Mercedes-Benz is the luxury volume leader by over 9,000 units! Also, BMW passenger cars tanked 14.1% despite the classification of the X1 as a passenger car. Some of this is surely due to the 5-series barely showing up in the sales numbers due to the mid-February release of it’s successor. 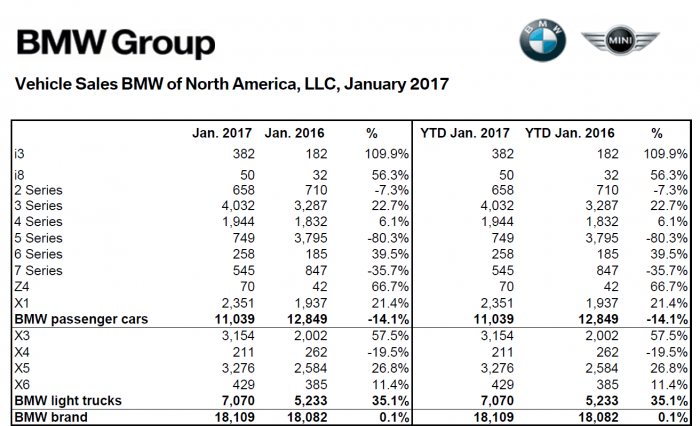 Two other interesting numbers: First is if one adds up all the unit deliveries of the i-, 2-, 6- and 7- series with the Z4, X4 and X6, the 2,603 units delivered is just slightly higher than X1 and slightly lower than X5 sales. The second number of interest is that used BMW deliveries totaled 110 units MORE than new car deliveries. Live by the lease, die by the lease!

“The increased availability of the highly popular BMW X models is paying off as our X model U.S. sales in January topped the all-important 50 percent mark for the second month in a row,” said Ludwig Willisch, President and CEO, BMW of North America. “Now, with February here, we are very much looking forward to the launch of our brilliant next generation 5 Series, only two weeks away.”

BMW Group Sales
In total, the BMW Group in the U.S. (BMW and MINI combined) reported January sales of 21,219 vehicles, a decrease of 0.5 percent from the 21,320 vehicles sold in the same month a year ago.