February was very close to flat with monthly year-on-year sales numbers up a scant 0.3% while incentive spending increased to almost $4,500 per unit delivered. Looking more closely into the numbers, the X-1, categorized as a passenger car, not a light truck, masked yet another decline in the passenger cars, echoing the broader US buyer shift from cars to CUVs, SUVs and trucks. But the overall growth, although small, was at least positive. The entire US light vehicle sales declined 1.1%, despite increases in customer support compared to last year. 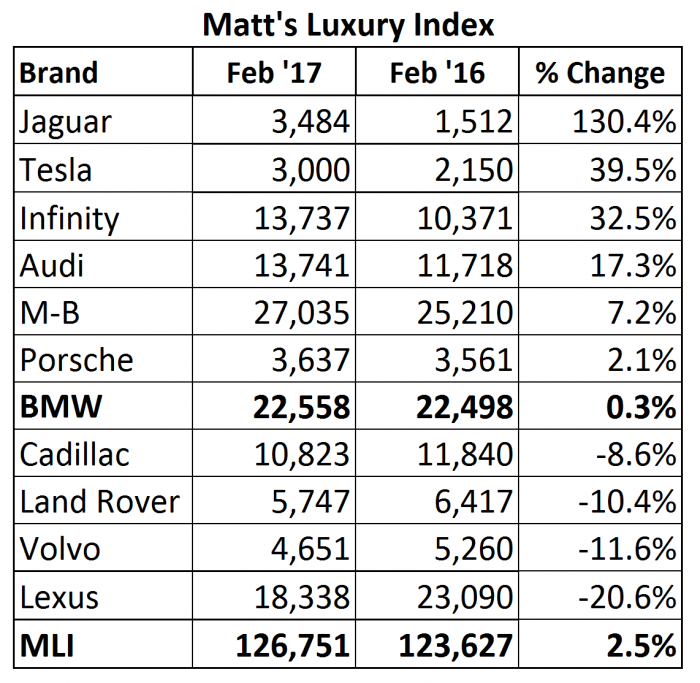 When it comes to the other luxury brands, the news is mixed as well. BMW USA underperformed the index as a whole, which grew 2.5%. Mercedes-Benz increased it’s lead as the luxury sales leader, but Lexus had a bad month, dropping over 20%, leaving BMW with a solid grip on the #2 luxury sales slot. It’s true that the new 5-series hasn’t been out all that long and isn’t really showing up in the sales numbers, let’s hope there’s a noticeable sales bump next month, as the 5-series is BMW’s second-best selling model, after the 3-series. And for 2017, it’s been selling about half as many as in 2016. It’s important for this car to do well. 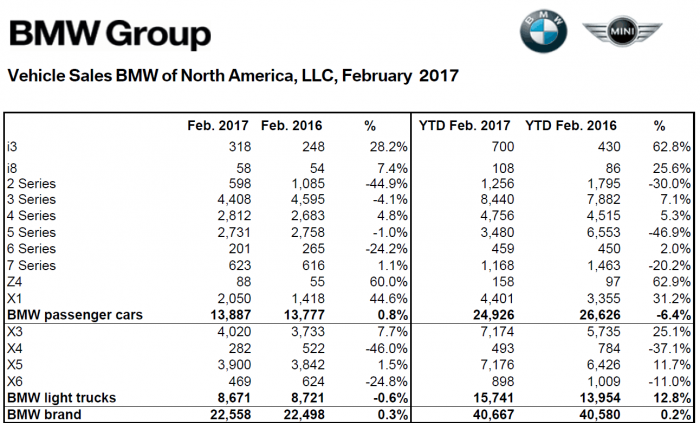 As we’ve come to expect, used car sales are doing very well. At over 38,000 units sold in 2017, used sales are within spitting distance of new car deliveries!

“March is the real beginning of the automotive selling season in the U.S. and BMW is well positioned for success with the right mix of vehicles and with the launch of the all-new 5 Series now underway,” said Ludwig Willisch, Head of BMW Group Region Americas. “The trend towards Sports Activity Vehicles is strong but so is demand for the new 5 Series, especially the new M550 which goes on sale in the Spring along with the hybrid-electric 530e.”